In New Zealand, the phrase, "Ehara taku toa i te toa takitahi, engari he toa takitini" translates to "My strength is not mine alone, it is the strength of many." When a massive road slip sent 49 feet (15 meters) of roadway down a cliff into the Pacific Ocean in northern New Zealand, the saying became a motto for the large team tasked with creating a solution.

The damage to Mahia East Coast Road in Wairoa, NZ occurred in April 2019 when shoreline erosion undermined an old wooden crib wall along the Pacific Ocean coast, causing part of the road above it to drop into the sea. The main challenges with the repair project included coming up with a significantly tall retaining wall structure that could support the road with limited horizontal space for construction. The repair also needed to be done while keeping what was left of the existing road open for traffic. Finally, due to the presence of ancient indigenous burial grounds nearby, relocation of the roadway was not an option. Considering all of these unique variables, the solution in this application required the expertise of numerous design and construction professionals.

When the road slip occurred, Wairoa District Council partnered with Land Development and Engineering (LDE) and Quality Roading and Services (QRS) to design and implement a practical and affordable solution. To address the initial challenge of keeping the road open during the project, a temporary prefabricated bridge was placed to facilitate traffic over the damaged roadway.

In order to address the space constraints for a retaining structure that could safely support the road, LDE’s design team came up with a Redi-Rock wall that would be reinforced using rock anchors. Anchor walls optimize load capacity in retaining wall applications that cannot accommodate excavation; in this case, a cliff face. Once the anchors - or ‘tie-backs’ are secured into the earth/rock, they can attach to Redi-Rock blocks directly or connect to blocks precast with metal hooks through a cast-in-place concrete waler beam.

By August 2020, LDE's design that included a Redi-Rock wall reinforced with rock anchors was approved and the QRS team began work on the enormous reconstruction project. “The local authority (Wairoa District Council) made a good decision in being quick to get an options assessment underway, which allowed for development of what became the final design”, explained Greg Bush, Civil / Geotechnical Engineer with LDE.

The design proposed by LDE included the construction of a 24-foot (7.3-meter) high by 46-foot (14-meter) long retaining wall using Redi-Rock blocks. A reinforced waler beam and earth anchors would create a tie-back system for securing the 2,310-pound (1,050 kg) precast modular blocks to the rock face. The new wall would be supported by an existing bench in the slope which supported the previous failed crib wall. The slope below the bench was reinforced with earth anchors as well, as the slope consists of weak sandstone and siltstone layers.

As the slope bench and base of the Redi-Rock walls sat 23 feet (7 meters) above sea level, neither the blocks nor the metal components of the tie-back system were at risk of saltwater corrosion. To be thorough in the coastal environment, the design called for concrete to cover steel components and the earth anchors to be galvanized and wrapped prior to installation.

The Redi-Rock wall was further supported by shotcrete facing and large rock revetment at the cliff base. The Redi-Rock blocks in Ledgestone texture blended beautifully with the area’s natural aesthetic. 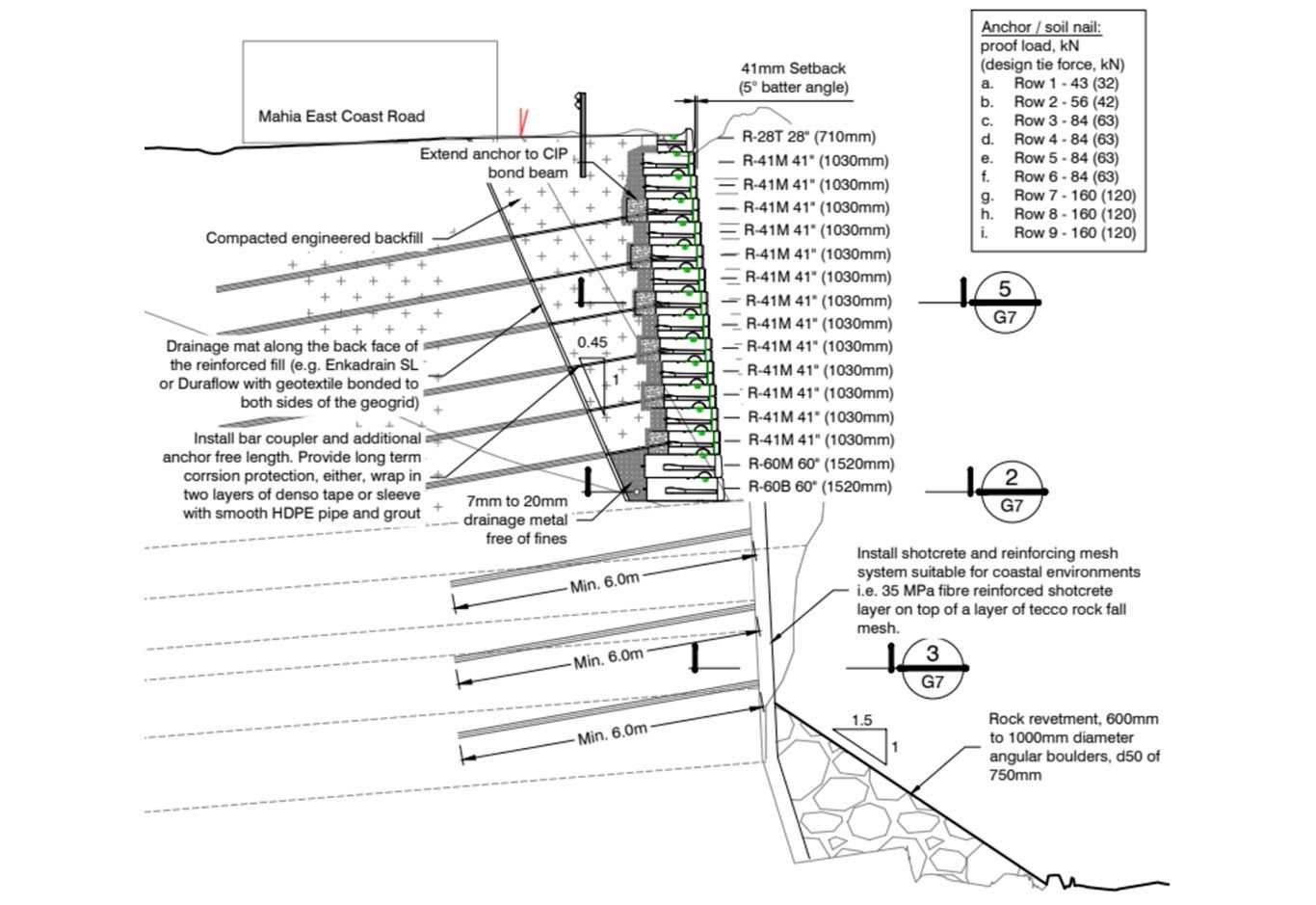 In order to meet the space constraints, the wall design called for earth anchors and a waler beam to tie into the cliff face. 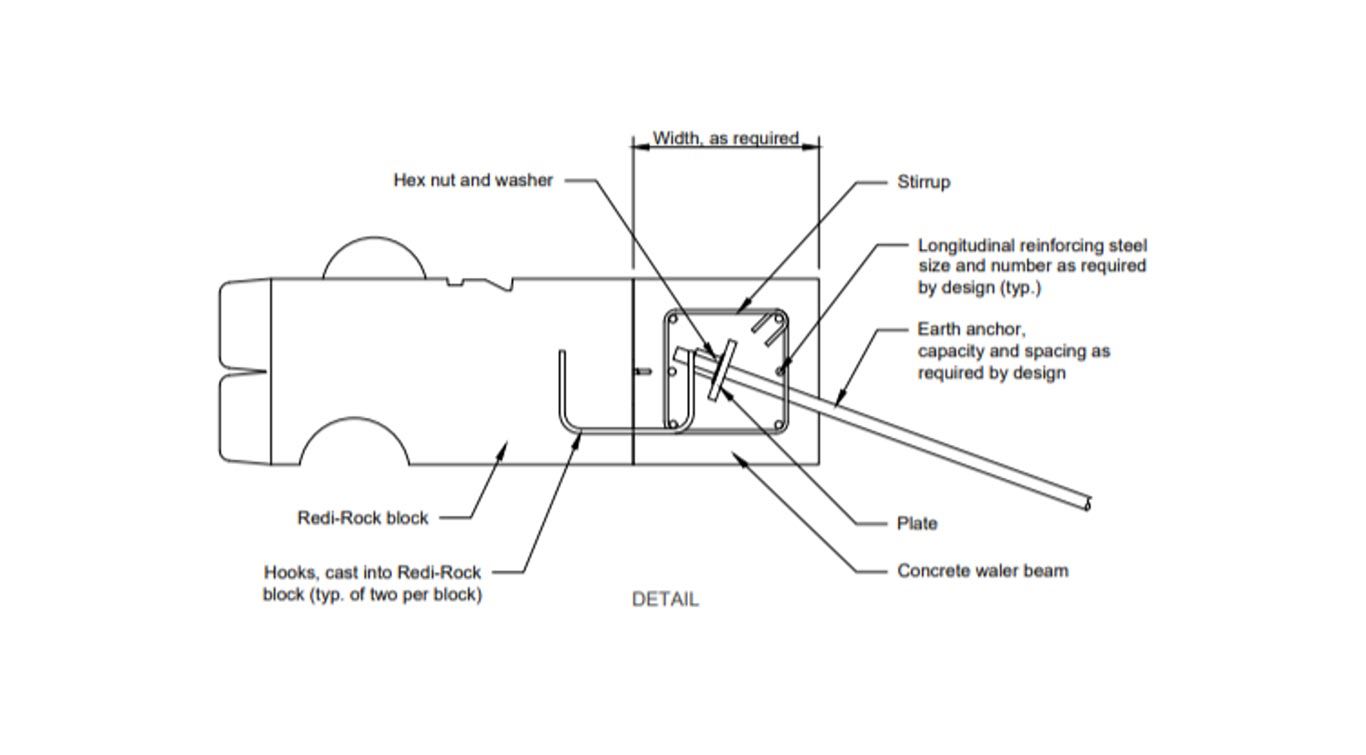 Every other row of 41in (1030mm) blocks were precast with metal hooks to connect to the pre-installed earth anchors.

When construction began in September of 2020, Mike Wilson, QRS Project Manager, first called in the ground engineering specialists at Rock Control to place ground anchors, 6.5 - 26 feet (2 - 8 meters) in length, into the cliff wall around the dropout area and within the dropout to strengthen the existing bank. Reinforced mesh was then installed to prevent rockfall during construction. Local Redi-Rock supplier, Duracrete, supplied the massive blocks to construct the new retaining wall, and Lattey Group assisted QRS with some of the project's heavy lifting work.

A skip bin was used to lower blocks to the base. An 8-ton digger also had to be lowered down with heavy equipment atop the cliff. After materials and equipment were delivered and the slope bench proved stable, the crew began securing the cliff face with 204 massive Redi-Rock gravity units. The wall was composed of multiple courses of Redi-Rock blocks, including two rows of 60in (1520mm) blocks, thirteen rows of 41in (1030mm) standard blocks, and one row of 28in (710mm) Redi-Rock blocks.

Every other row of Redi-Rock 41in (1030mm) blocks were precast with metal hooks that joined the blocks to the pre-installed ground anchors, immensely fortifying the wall strength.

To further support the project, the cliff walls beneath and flanking the Redi-Rock wall were sprayed with reinforced shotcrete. Finally, a 98-foot (30-meter) long by 4.9-foot (1.5-meter) high section of rip rap rock revetment was installed at the cliff base to protect against future erosion caused by wave action or rising sea levels. 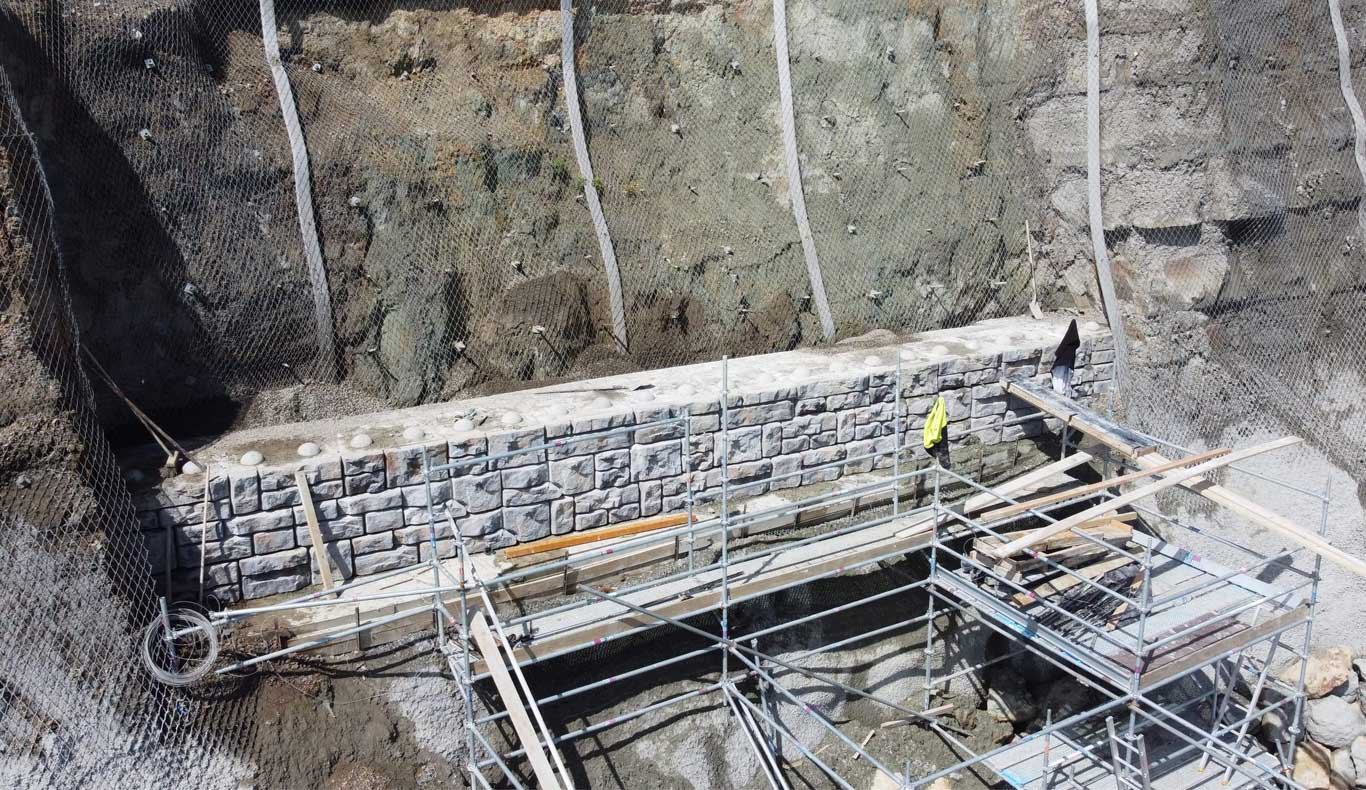 As the project came to completion in February of 2021, all those involved in the colossal project had reason to celebrate. Built in just five months, the 1,104 square feet (102.5 square meter) wall had to be carefully constructed in a volatile coastal environment nearly impossible to access. “Working on a vertical rock face above the sea with a skinny road above and getting it done without incident has been a huge accomplishment,” said Project Manager, Mike Wilson. The team’s innovative use of Redi-Rock materials and design schemes have produced a lasting solution and one that honors the natural splendor of the New Zealand coast.

On March 4, 2021, just a few weeks after the completion of the wall, a series of earthquakes struck roughly 620 miles off the coast of both NZ main islands. The largest of the earthquakes registered at a magnitude of 8.1. Tsunami warnings were issued, but the water surge was not as significant as expected and the retaining wall performed well through these events. 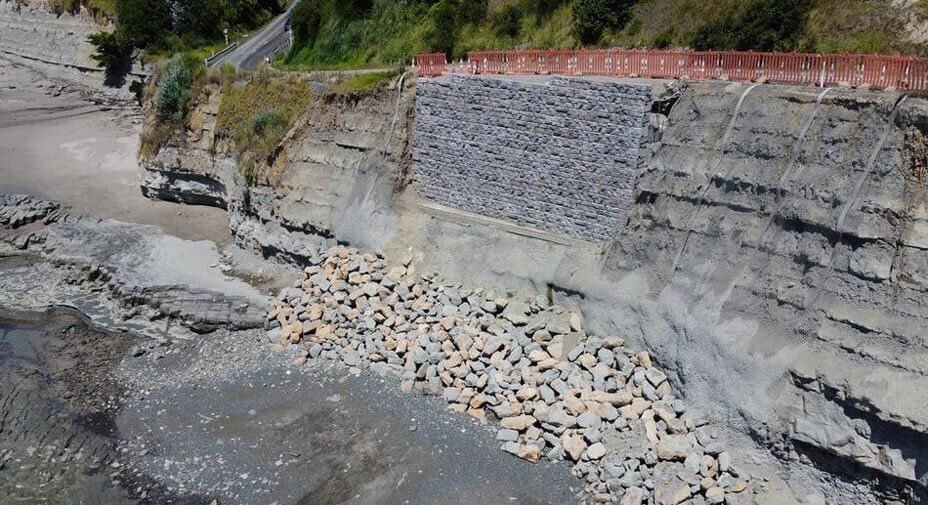