A private residence resting on a wooded bluff above Lake Michigan had a major washout of the slope between the house and the lake. The soil consisted of a sand layer resting on top of a hard clay layer. The slope washout took with it many of the home's mature trees and seriously threatened the foundations of the house.

"The collapse of land between the house and lake was caused primarily by an underground water leak from a city service," said Joe O'Neill, project engineer and principal of Benchmark Engineering.

The homeowner needed a solution that could be implemented immediately and installed from the beach to protect the home and garage foundations, but also provide an aesthetically pleasing way to do so on the tight property line.

The homeowner turned to Benchmark Engineering in Harbor Springs, Michigan for a solution to the erosion issue. Benchmark recommended a retaining wall to stabilize the slope and prevent further erosion.

"Access to the site was limited so we had to bring in something in pieces," O'Neill said. All the material - stone for backfill, blocks, and equipment - had to be moved about 1,000 feet (304.8 meters) down the beach with a loader. The installer had to obtain special permits from the Department of Environmental Quality to track across the beach. Installation could only be completed from the front of the wall.

The efficient installation time and mobility of a segmental retaining wall system coupled with the proven track record of slope stabilization made Redi-Rock retaining walls a natural choice for the job. Benchmark specified Redi-Rock retaining walls in two 12 foot (3.7 meter) tiers with 8 feet (2.4 meters) between the two. The design of the wall called for two 90 degree outside corners using Redi-Rock's 9in (230mm) setback block to allow for adequate backfill behind the wall while requiring minimum excavation and providing an aesthetically pleasing wall.

The residence was the location of Redi-Rock's first double 90 degree wall with a 9 inch (230 millimeter) setback. Redi-Rock's 9in (230mm) setback block creates a 26.6 degree batter angle. Benchmark specified Redi-Rock 41in (1030mm) Anchor blocks for the first course of both tiers of the walls.

This Redi-Rock anchor system gives stability to the wall by providing sliding resistance for the base of the wall in areas where space is too restrictive for excavation for geogrid but reinforcement is still needed. A threaded steel rod is attached to the anchor block by a square washer in the void in the center of the block. A steel rod connects to the washer and protrudes through the back of the block, extending in this case for minimum 18 feet (5.5 meters) into the soil behind the wall at a downward angle of 12 degrees. A directional drill was used to punch the holes for the Manta Ray MR-1 Galvanized Soil Anchors. A 10 foot (3 meter) length of geogrid was installed between the fifth and sixth courses for additional stability.

Since this was the first 9 inch (230 millimeter) setback wall with two 90 degree outside corners, a collaborative effort between Redi-Rock International's engineers, Redi-Rock's Research and Development team, and the installer, Harbor Springs Excavating, helped make this project a success.

By using the Redi-Rock retaining wall system's ability to build a 9 inch (230 millimeter) setback wall with double 90 degree outside corners, the owner of this residence was able to stabilize the slope in front of the home. The Cobblestone texture of the blocks gave the wall an aesthetically pleasing look while also provided ample room for the homeowner to replace the landscaping that was lost due to erosion. 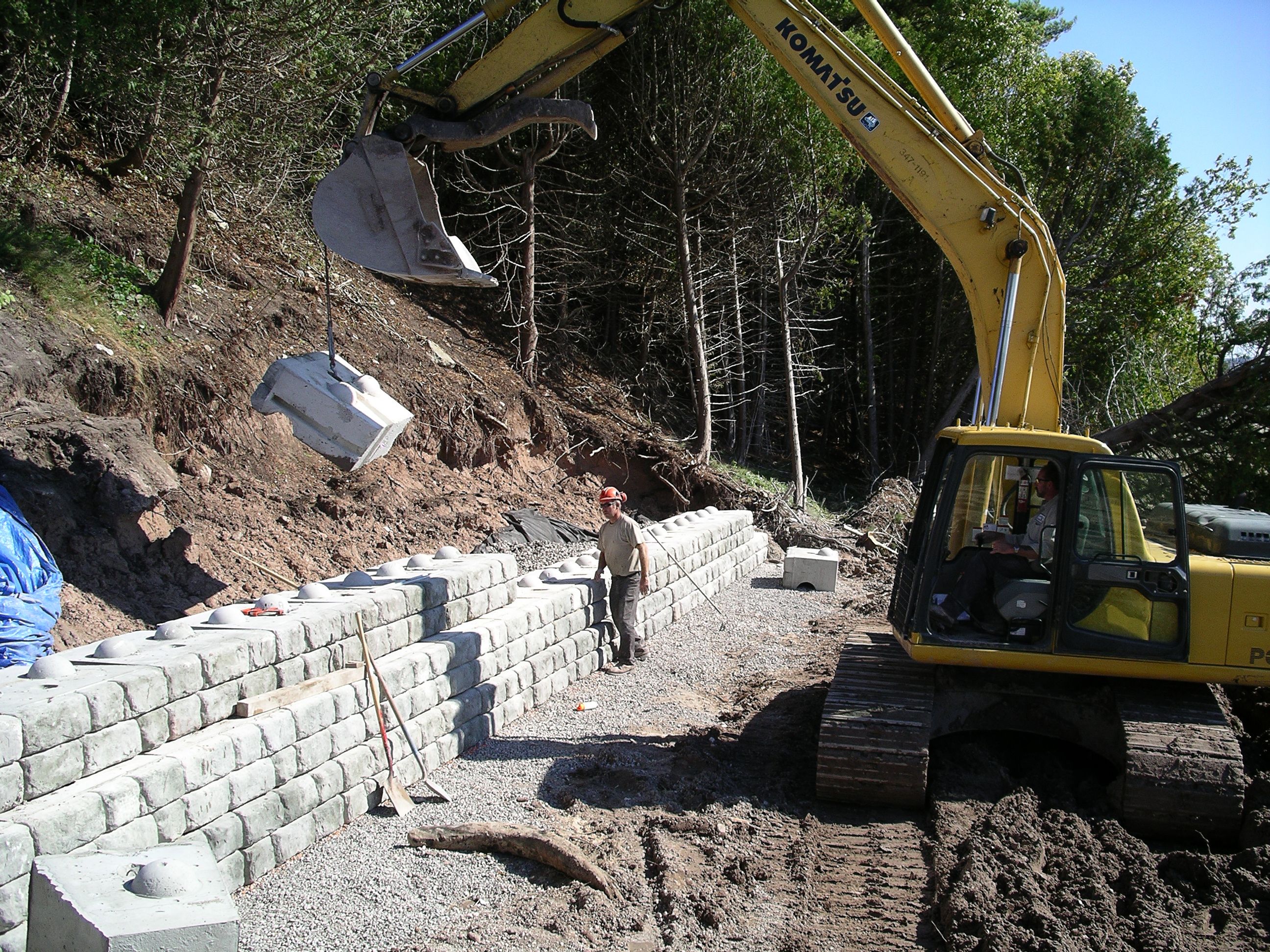 Due to limited construction space, materials and equipment had to be transported 1,000 feet (304.8 meters) down the beach for this project and could only be installed from the front of the wall.