West Chester Township, just outside of Cincinnati, Ohio, has seen tremendous growth as the Cincinnati-Dayton metropolitan areas continue to converge.

Until recently, West Chester did not have a real downtown. Developers started brainstorming a planned downtown area, and West Chester's new Towne Center was born. The Square at Union Centre is designed to be the central gathering place for the township with a two acre park and open space for concerts and other events. The Square overlooks a pond that catches storm water runoff from the other areas of Towne Center.

The pond lies in the center of the new downtown complex and is a focal point of the development. The pond's banks were lined with riprap in some areas but needed more reinforcement to deal with the rise and fall of the water as well as the freeze-thaw cycles.

"The number one reason Redi-Rock was chosen for this project was aesthetics. The second reason was durability. With the freeze thaw cycle here in Ohio and the water environment, we just had to have a solid block," said project engineer Joe Kowalski, P.E.

The classic Cobblestone look of Redi-Rock's big block gravity retaining walls tied in with the aesthetics of the development well. Though each massive Redi-Rock block has nearly six feet (1.8 meters) of face, the Cobblestone texture gives the appearance of six smaller blocks. This allows developers to achieve the look of a high-end professional landscape wall with the efficient and easy installation of a big block system.

The walls were constructed in a dry condition, prior to allowing the pond to fill. Crews from Sunesis Construction prepared the leveling pad by digging a 48 inch (1219 millimeter) wide trench the length of the wall and compacting the existing soils. The trench was then lined with 12 inches (304.8 millimeters) of No. 57 crushed stone and leveled. Installing a leveling pad to the engineer's specifications ensured that the rest of wall construction would be level.

A majority of the project utilized Redi-Rock 41in (1030mm) solid blocks, placed by Sunesis using an excavator and a person at the wall to guide the blocks into place. The engineering plans for the project called for a 4-inch (102 millimeter) diameter flexible, corrugated, slotted drain pipe and a permanent drain outside the wall to make sure the water drains from behind the wall properly. Kowalski also called for a one-foot (0.3 meter) crushed stone drainage zone behind the entire height of the wall that allows the wall to drain properly. Because retaining wall failures are often the result of insufficient or improper drainage, preparing a proper base and installing drainage are critical steps that must not be overlooked.

"They really chose Redi-Rock for the looks," said Roger Titkemeyer of Redi-Rock of OKI, the company that supplied block for the project. "The functionality of Redi-Rock was key, but the aesthetics are what hooked them."

The Towne Centre pond underscores the fact that storm water management doesn't need be an eyesore. By designing this retention pond with aesthetics in mind, designers were able to capitalize on their storm water solution rather than hide it. 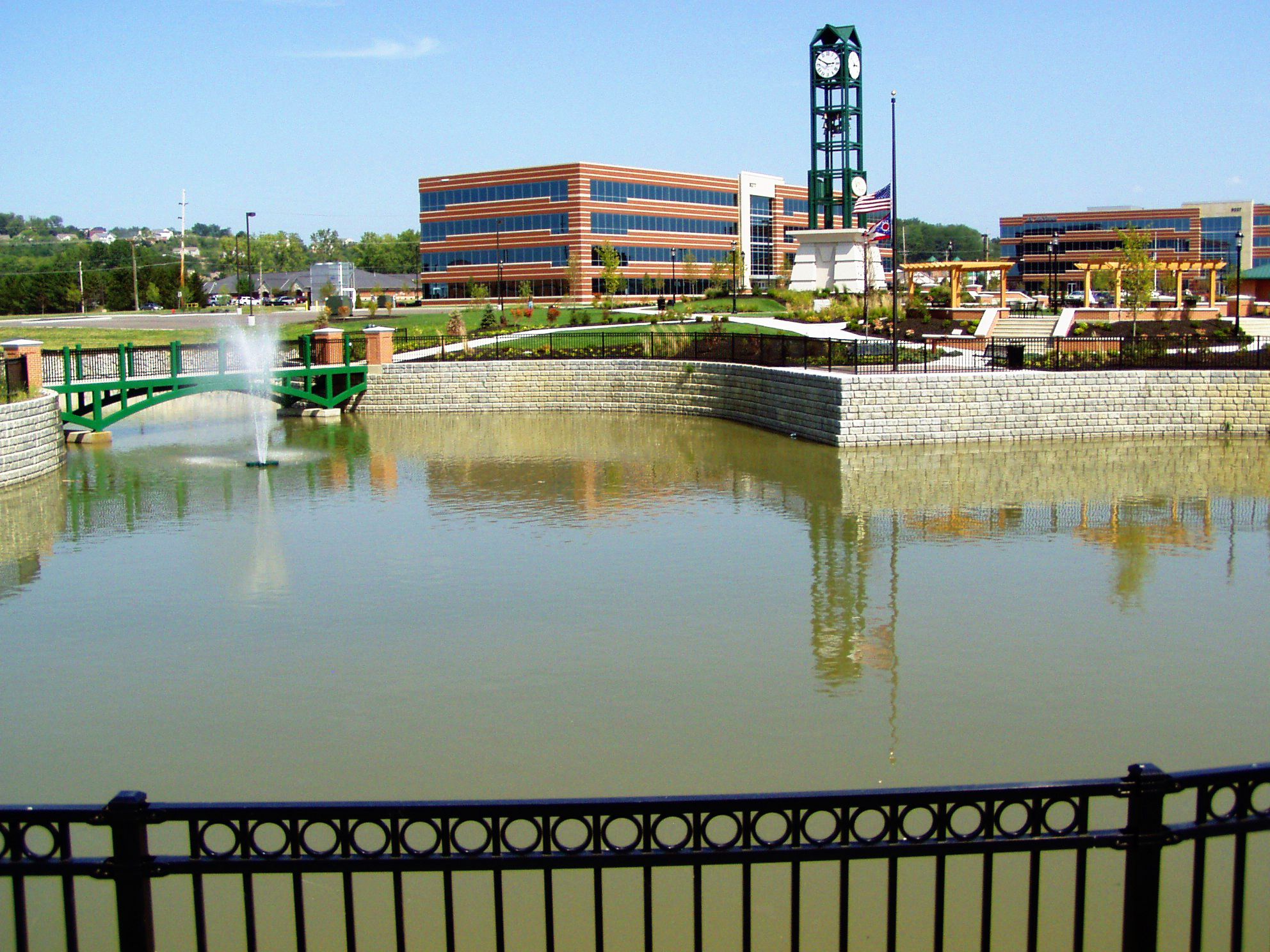 The Redi-Rock gravity retaining wall blocks used for this stormwater retention pond utilized the Cobblestone texture, giving it the aesthetic quality the owners were looking for.