"When we originally constructed the apartments here, the creek was about 20 feet (6.1 meters) further away," explained Randy Humbert, President of the Residential Construction Division of Miller Valentine Group which owns this Dayton area apartment complex, Stonecreek Apartments.

"Over the past few years, the road was widened and some land was cleared up river, which caused the water volume in storm events to pick up," Humbert said. "Sediment and realignment of the stream upstream put us in the cross hairs. Any time there was a heavy rain, it just ate away at the stream bank-undercutting and caving it in and washing it away."

"Residents had been losing green space over the last few years, but when the creek intrusion started affecting the parking lot and threatening the building foundations something had to be done," continued Jeff Barrow, P.E. and President of Civil Solutions Associates of Cincinnati, Ohio.

Just days before Christmas in 2011, the 12 units in the building closest to Holes Creek needed to be evacuated by order of the City of Moraine. Residents were able to move into other units on site, but finding a fast solution that would get residents back into their homes as soon as possible was a major priority. Holes Creek is under the jurisdiction of the US Army Corps of Engineers, so this project required USACE permits and approvals. 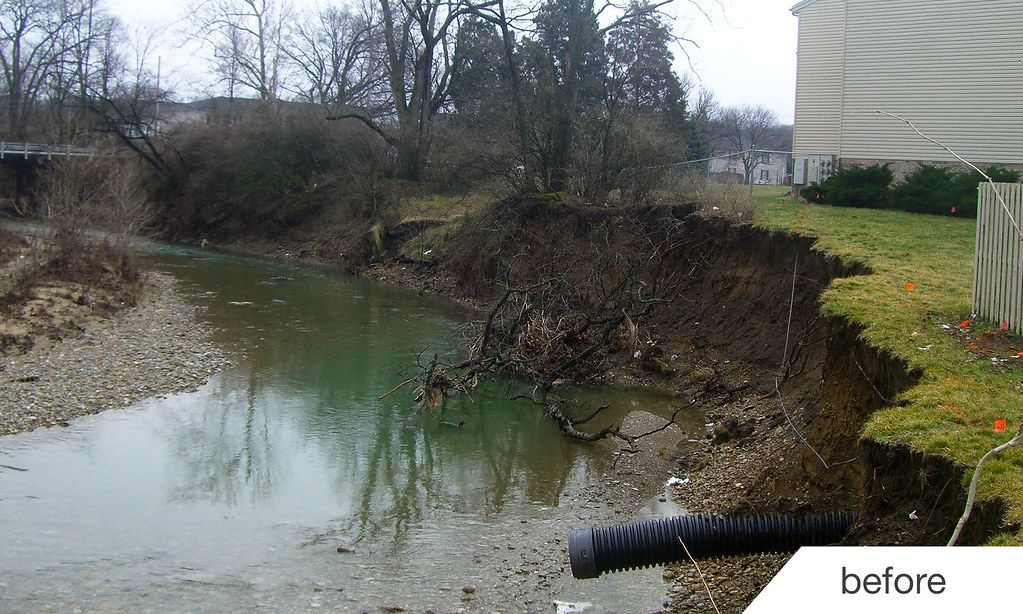 Erosion of this creek became so bad, it threatened the parking lot and building foundations of the neighboring apartment complex causing some of the buildings to be evacuated just before Christmas 2011.

The owners and engineers working on the project chose Redi-Rock for several reasons:

The wall design included Redi-Rock 41in (1030mm) gravity blocks, which weigh as much as a Budweiser Clydesdale, and Redi-Rock 9in (230mm) setback blocks which increase the batter of a wall, allowing a higher gravity wall to be built. At the tallest point, the wall actually stands 19.5 feet (5.9 meters) tall, but the bottom 3-3.5 feet (.9 - 1.1 meters) are buried.

In addition to competitive pricing, product availability played a major role in getting this project completed so quickly. Upon award, Redi-Rock Structures went into immediate production for the 9in (230mm) setback blocks. In order to achieve the intended result, the production team led by Duane Connor worked nearly around the clock to complete the order in time. 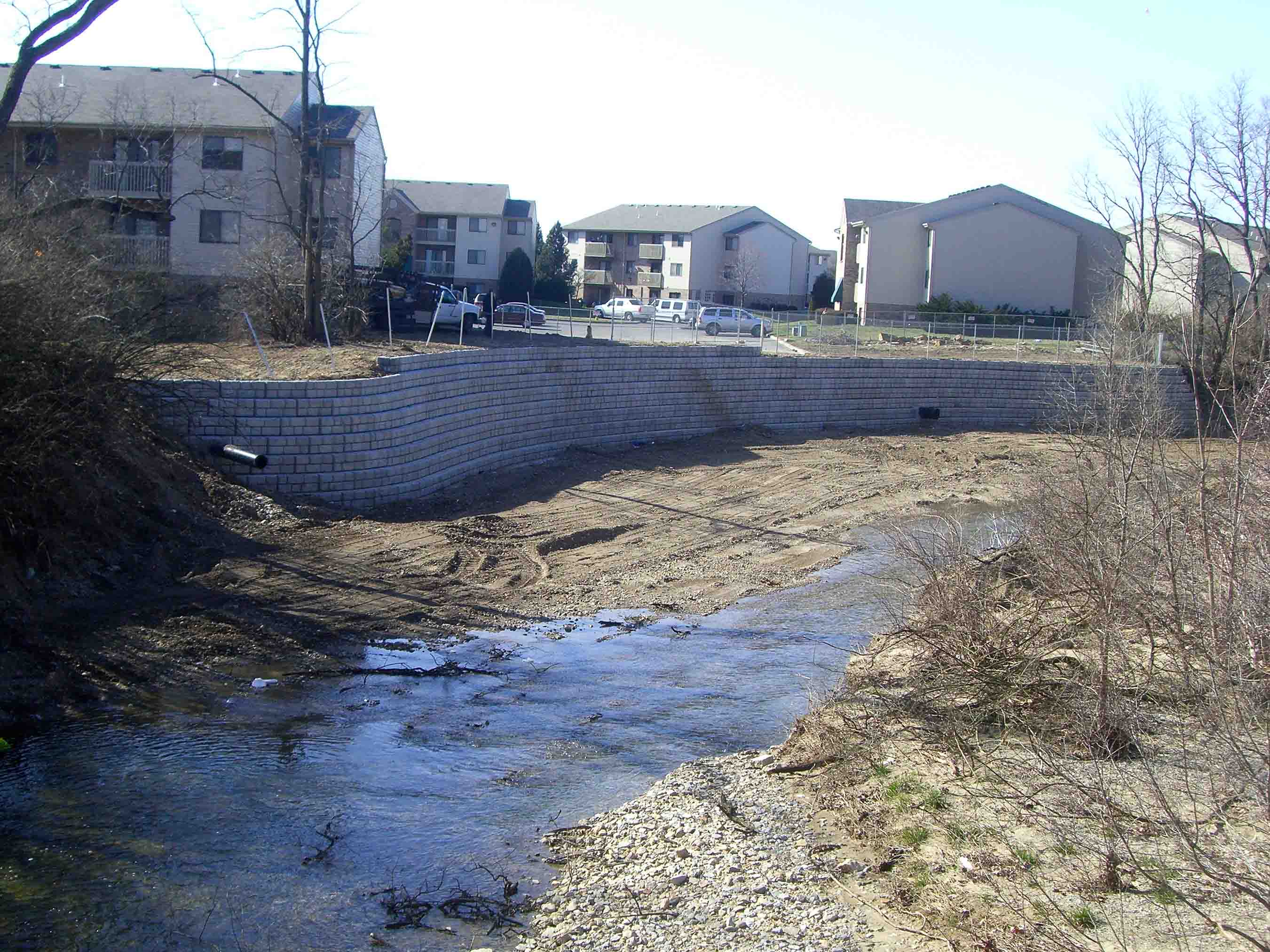 Speed of installation was imperative on this project - it needed to be completed before additional rainfall could destroy any more of the creek banks.

Installation of 5,100 square feet (473.8 square meters) of Redi-Rock walls was completed in just 8 days to protect the building and parking lot. "Upon arrival to the site, Redi-Rock of Kentuckiana proved themselves once again with a flawless install. Stream reroute, dewatering, excavation, and installation was frankly remarkable. Their team understood the dynamics of the stream and the critical importance of the project," explained Tim Turton, Managing Member of Redi-Rock Structures of OKI.

Barrow added: "The end product made a substantial impact and improved the overall image of the development. It turned the liability of an encroaching stream into a visual asset." 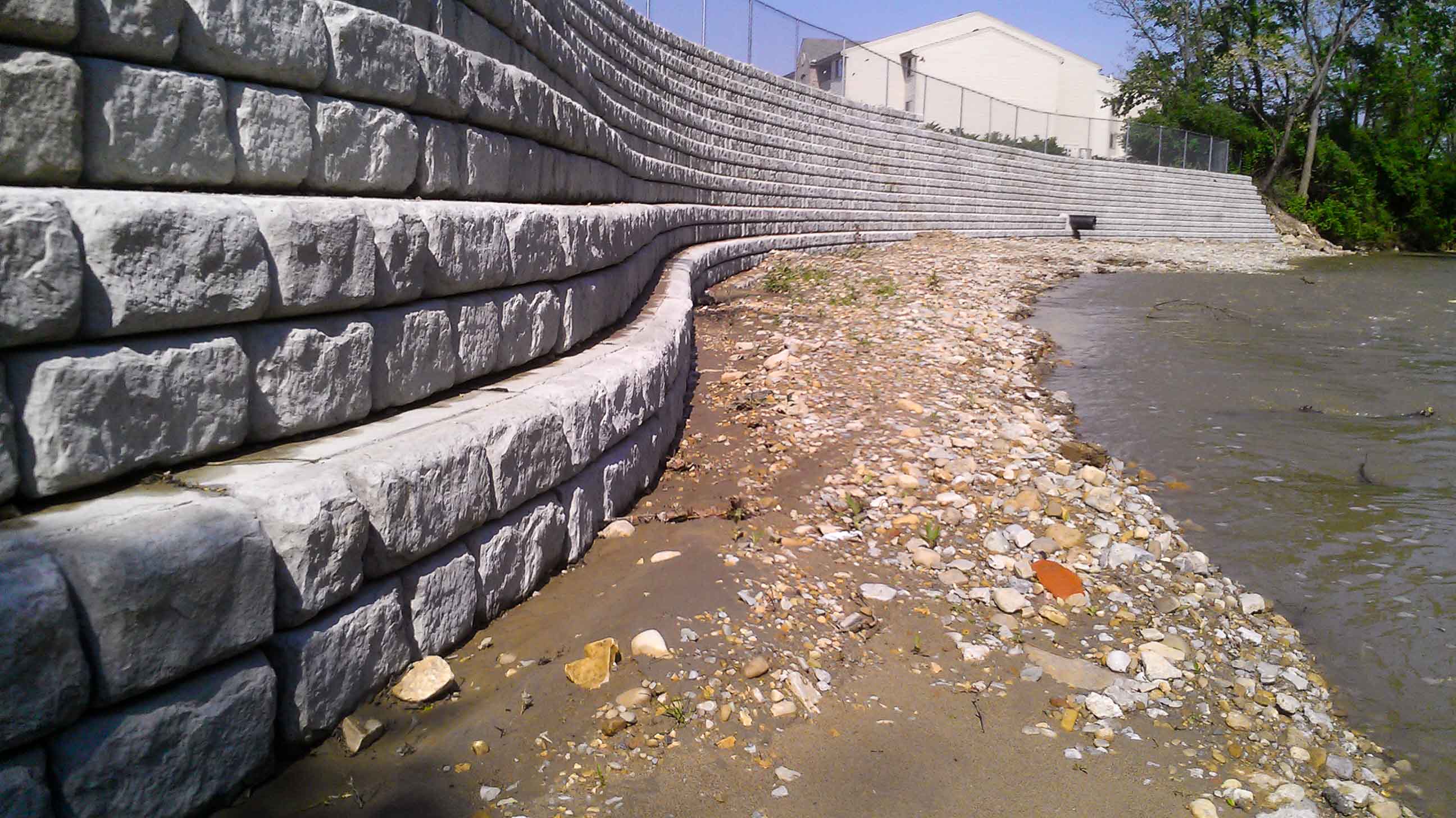 The completed Redi-Rock gravity wall in the Cobblestone texture