When this Indiana county needed to restore an historic bridge, the project was no simple task.

The bridge was a four-span, closed-spandrel concrete arch bridge over the Tippecanoe River in Tippecanoe County, Indiana. It was originally built in 1925, then rehabilitated in 1977. The total length of the bridge measured 378.8 feet (115.5 meters)and the largest span was 97.1 feet (29.6 meters).

H. Stewart Kline & Associates was the design firm for the bridge restoration project. Stewart W. Kline explained why the County chose Redi-Rock for the project:

"We've used Redi-Rock previously in some historic situations when we were tying into limestone abutments. Since this project was an arch rehabilitation, the idea was to try to do something that would aesthetically keep with the character bridge which has been an area landmark for generations. We were trying to use something that looked like it fit in and complemented the bridge," he said. 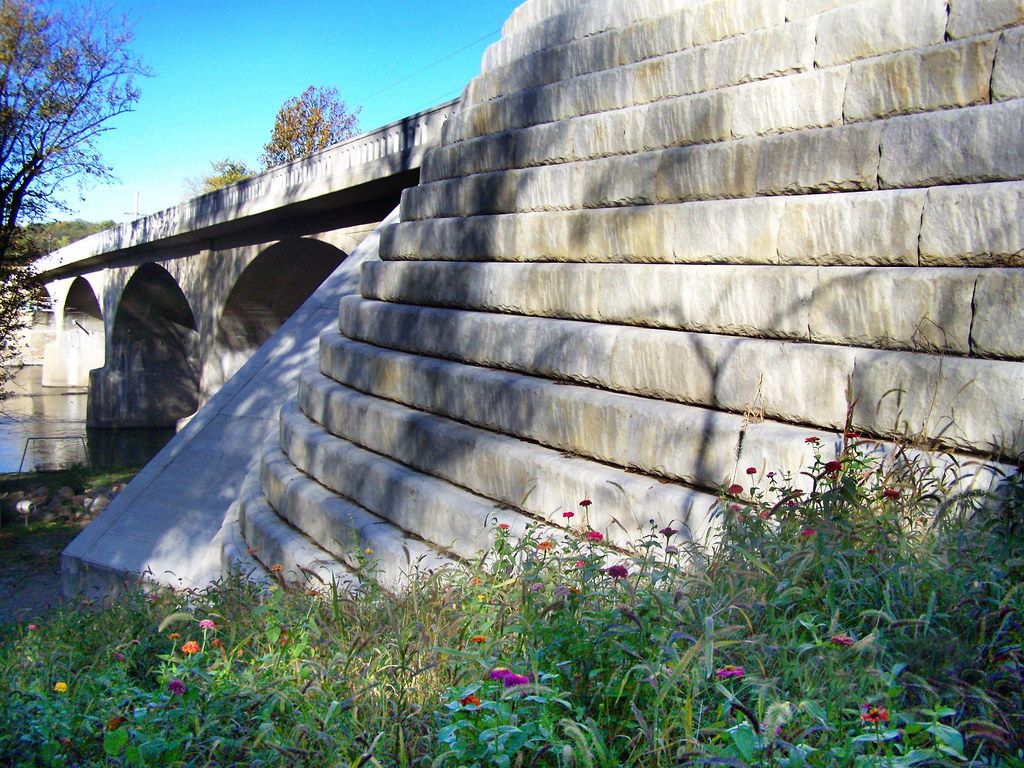 Redi-Rock is an engineered, precast retaining wall system that utilizes massive blocks weighing over one ton each, allowing for the construction of tall gravity walls that often require no reinforcement. The Redi-Rock Limestone texture mimics the look of natural cut limestone, and has been used in historic projects around the world.

Kline utilized several different block types from the Redi-Rock arsenal to minimize the excavation and reinforcement required throughout the project, including 41in (1030mm) solid blocks and 9in (230mm) setback blocks. The availability of multiple block types allows engineers to maximize wall heights in their designs.

The goal of the project was not only to restore the bridge, but to widen the roadway as well. "The old road was very steep; it had over a 9 percent grade, so we had to cut our way through the valley with a wall to shallow the grade and widen the road," Kline explained. 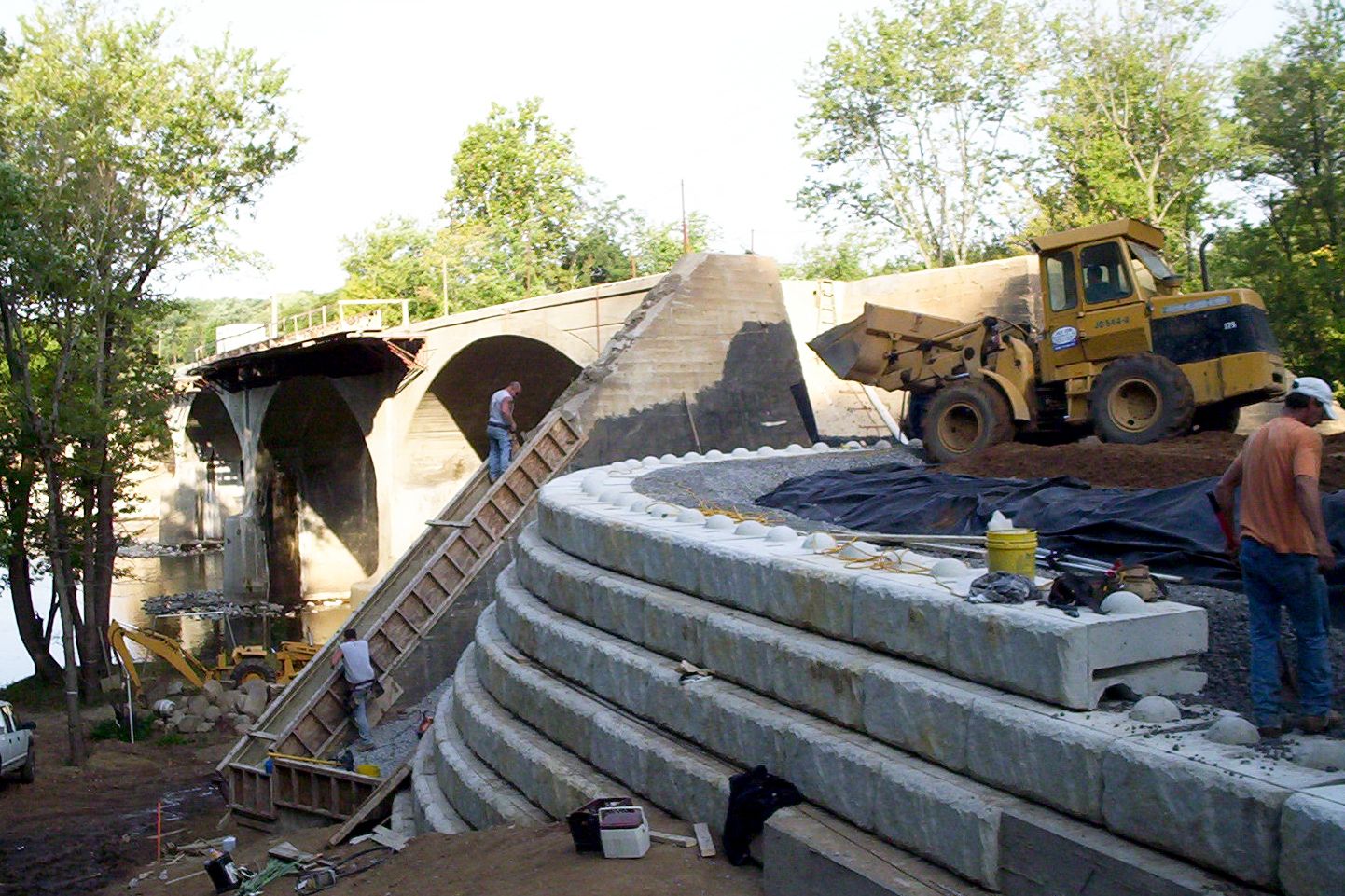 Construction of the Hog Point Bridge was completed by a small crew and a few pieces of heavy machinery. Redi-Rock blocks stack like giant Lego blocks!

On the other end of the bridge, Redi-Rock walls served as fill walls to widen the roadway. As the walls approached the arch, they curved behind the old wing walls all the way to the base, "basically relieving pressure off the old wing walls as the road widened," Kline said.

In total, 10,757 square feet (999 square meters) of Redi-Rock gravity walls were specified for the project. More square footage was added as the project progressed due to the soil situation.

Almost all of the walls in the project were specified as gravity walls. Kline utilized the Redi-Rock 9in (230mm) setback blocks throughout the project to increase the setback of the walls and allow taller gravity walls to be built. In some sections, the design alternated between Redi-Rock 41in (1030mm) solid blocks and 9in (230mm) setback blocks to vary the batter. 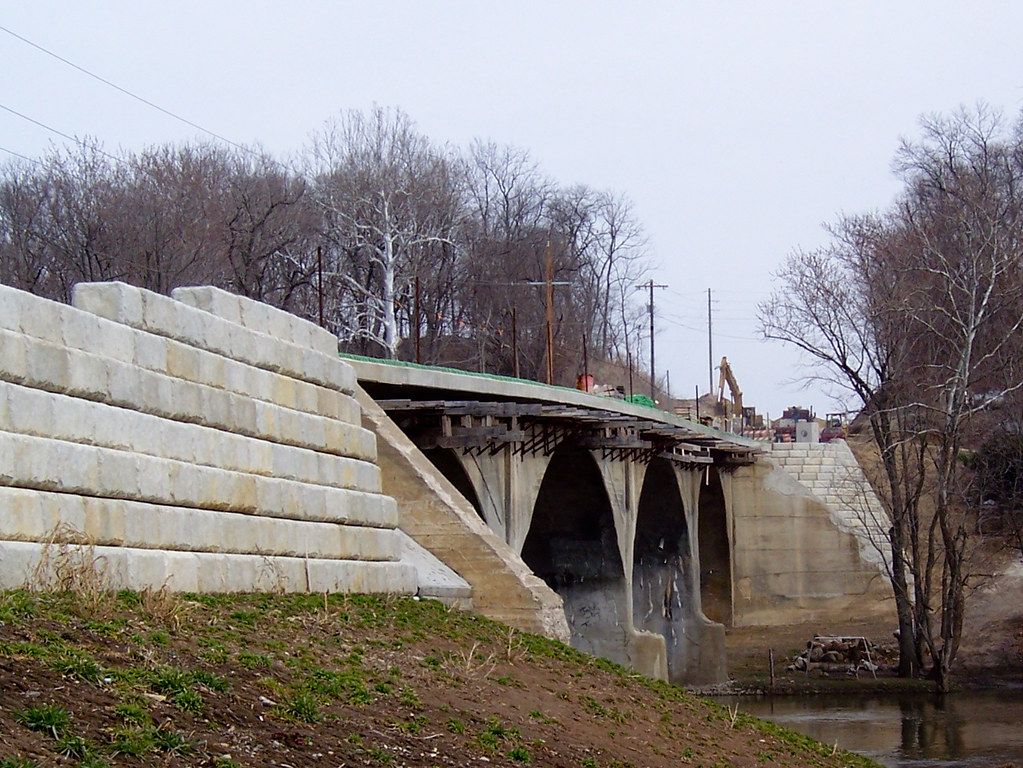 This landmark bridge was restored and improved to create a safe crossing for residents of Tippecanoe County.

The cut walls were installed that winter and the project was completed in late 2011. "It's turning out really well, and it's certainly one of our more photogenic projects," Kline said.