Harnessing a Unique Solution to Repair A Failing Wall

When the Harwood family bought a home in Peaceful Valley in Spokane in 2004, they were concerned with the 25 foot (7.6 meter) high retaining wall that created their back property line. The wall was more than 100 years old but engineers were confident the wall was secure.

However, two record-setting winters and the construction of a foundation for a garage above the wall caused the hundred-year-old wall to fail "violently," owner Gary Harwood said. The wall toppled in April of 2008, causing damage to the house and the garage below the Harwood's property as well as threatening the foundations of their home and garage.

After the initial shock wore off, the Harwoods launched a search to find out how to fix the major problem that had developed in their backyard.

The Harwoods hired an engineering firm that determined that a reinforced retaining wall would be necessary due to the height, soil conditions, and load-bearing requirements. Because access to the site was extremely limited and the terrain was so steep, finding an appropriate solution was not a simple task. The Harwoods were familiar with Redi-Rock retaining walls due to several walls around their neighborhood, and were impressed with the look as well as the engineering.

The engineers recommended soil anchors for the project; however, the original soil anchor design called for three phases of drilling and block installation, making it labor- and time-intensive, and thus cost-prohibitive. 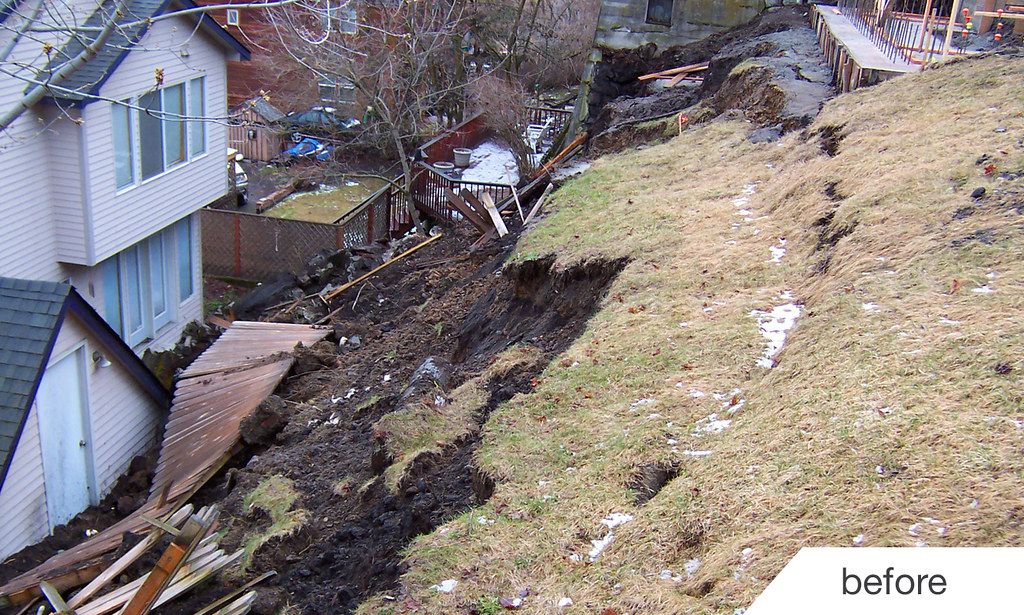 The 100-year-old retaining wall of this residence collapsed, threatening the foundations for the home and garage.

Searching for an alternative, Harwood found Soil Nail Launcher, Inc. online and was impressed with their experience and reputation for solving reinforcement issues such as this. Soil Nail Launcher was able to design a solution that involved 29-foot (8.9-meter) long grouted soil anchors that could be installed in one phase instead of three.

Soil anchors are soil reinforcement tools used to stabilize the soil behind a retaining wall when excavating behind the wall to place geogrid isn't feasible. Soil Nail Launcher takes a unique approach to soil nail installation-they've developed a system that utilizes a declassified British military cannon to "launch" the anchors into the earth behind a wall.

The cannon "can accelerate a 1.5 inch (38 millimeter) diameter, 20 foot (6 meter) long steel bar to 220 miles per hour (354 kilometers per hour). As these high speed projectiles enter the earth, a shock wave is generated at the tip that causes the soil particles to 'jump away.' The bar enters the earth without significant abrasion. The soil particles then collapse onto the bar, providing surprisingly high pullout resistance-many times greater than for driven bars and rods," according to the Soil Nail Launcher website.

The soil anchor rods were attached to Redi-Rock 41in (1030mm) anchor blocks by an engineered bracket. The anchor block is manufactured with a void in the middle of the block which is specifically designed to integrate with soil anchor systems. Redi-Rock retaining wall blocks weigh about one ton each, harnessing the power of gravity to build taller retaining walls. The blocks interlock using a patented knob and groove design that ensures the wall will stand the test of time.

Construction of the wall was accomplished entirely from the front side of the wall, which was difficult considering Wilbert Precast's crew had only about 10 feet (3 meters) of space to work with between the neighbor's garage and the front of the new wall. Wilbert brought in 500 yards (457 meters) of fill and had to install it using a telebelt extended over the neighbor's roof due to space constraints. 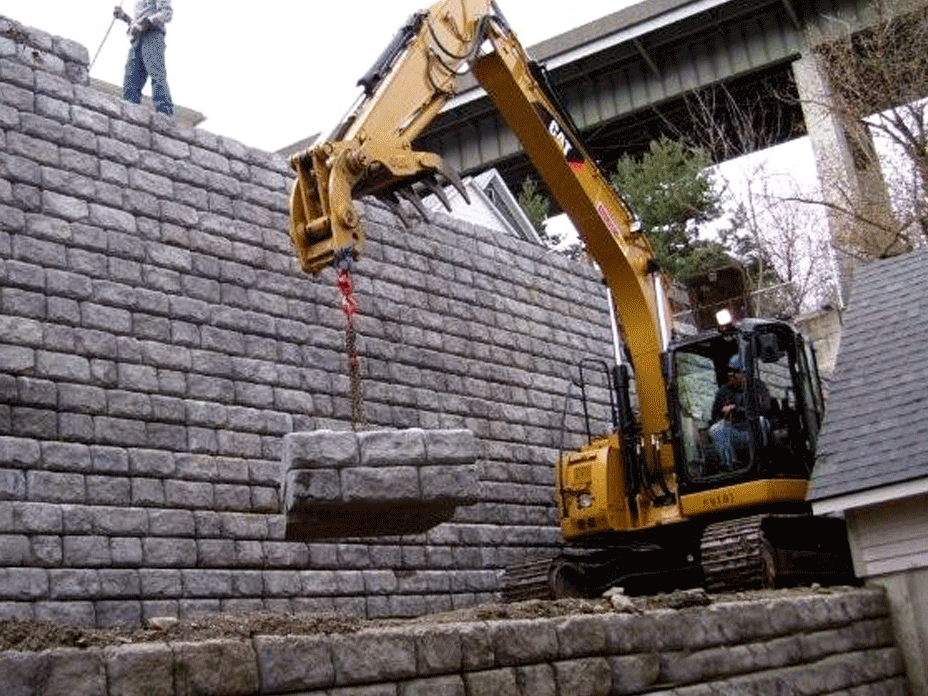 Installers for this project had just 10 feet (3 meters) of space to work with when constructing the new Cobblestone textured retaining wall.