When Hurricane Harvey hit Houston in August of 2017, the Lumpkin Road detention pond flooded and receded multiple times and performed exactly as engineered.

Some areas of Houston received 40 inches (1 meter) of rain in less than 48 hours, but "there are no signs of movement or distress," Hines said. "The drawdown at this location was pretty extreme and the soil behind the wall was fully saturated. It performed perfectly."

"The design model for these additional projects will be identical to the Lumpkin Road model. When we met with the flood control folks, we were able to show them that Lumpkin Road performed perfectly during Harvey. That's pretty good proof," Hines said.

Houston's Tax Increment Reinvestment Zone No. 17 is clumsily named, but its mission is admirably clear: per the organization's website, TIRZ 17 is a "local government corporation created to aid, assist and act on behalf of the City of Houston in promoting the common good and general welfare in the Memorial City area of Houston."

Also known as the Memorial City Redevelopment Authority, the agency is focused on developing, maintaining and rehabilitating public infrastructure, particularly roadway and drainage infrastructure. Beginning in 2013, the Lumpkin Road Reconstruction Project aimed to improve traffic flow on Lumpkin Road between Westview Drive and Northbrook Drive; provide pedestrian accessibility to Houston Community College; and improve drainage through the installation of storm sewers, replacement of aging water and sewer lines, and improvements to the detention basin at the northwest corner of Lumpkin Road and Westview Drive.

To increase the Westview Basin's capacity so it met current standards and worked within the City of Houston's drainage master plans, the L-shaped detention area had to be deepened to about 19 feet (6 meters) maximum depth, and all six retaining walls had to be pushed back about 5 feet (2 meters). Several factors, however, made this a difficult proposition:

That's quite a list of problematic factors for what should have been a relatively routine project. Fortunately, as preliminary design was getting underway, LAN engineers attended a Lunch & Learn about the Redi-Rock system presented by Browne Baker of Wilbert Vaults-the Redi-Rock supplier in Houston. For Baker, it turned out to be an extremely productive lunch.

"At the end of the presentation, LAN engineers mentioned a large project they were working on, that they thought might be a good application for Redi-Rock," he notes.

"They sent me the design parameters for a proposed detention pond, and we visited the site and worked with several consultants to facilitate design and costing. Eighteen months later, our local installer was awarded the project. Four months after that, 4,000 blocks had been installed." 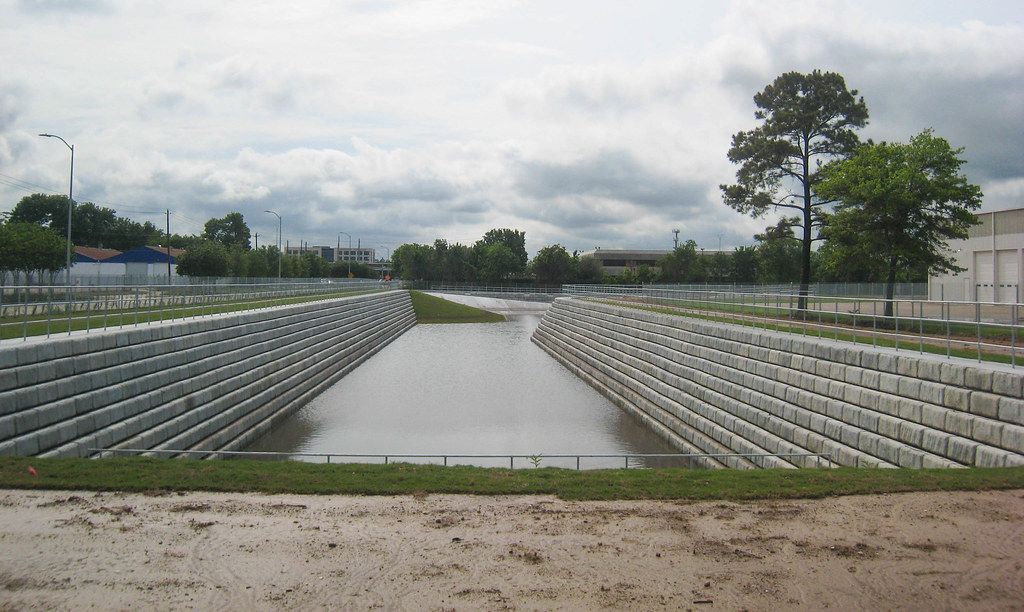 The City of Houston was able to nearly double the size of a critical detention basin, while working within narrow easements, using heavy, interlocking, concrete blocks.

REDI TO ROCK ON A GOOD FOUNDATION

Redi-Rock is an engineered retaining wall system that uses indented, one-ton, precast concrete blocks that stack together like giant Legos to create strong, durable walls. The Redi-Rock gravity system harnesses gravity, and sheer mass, to build tall retaining walls without needing lateral reinforcement. This factor alone made it a good choice for the narrow corridors available on the Westview basin, but cost was another reason to like Redi-Rock on this project.

"Other options that would have worked here would have been twice the cost," says Hines. Stacked by a crane, Redi-Rock walls go up fast, and it didn't hurt that the one-ton blocks are made in Houston.

"The retaining walls would be required to support the reconstructed portion of Lumpkin Road and provide a very tall gravity wall solution in existing soils consisting of stiff to hard sandy clay and clayey sands," notes Hines. "Regrettably, all the soil test borings completed in the vicinity of the proposed detention-pond improvement were advanced to a depth of 40 feet (12 meters) without encountering rock."

With those challenges in mind, Hines prepared sealed construction shop drawings for six interconnected retaining wall segments designed to use the Redi-Rock gravity wall system with 9in (230mm) setback blocks. 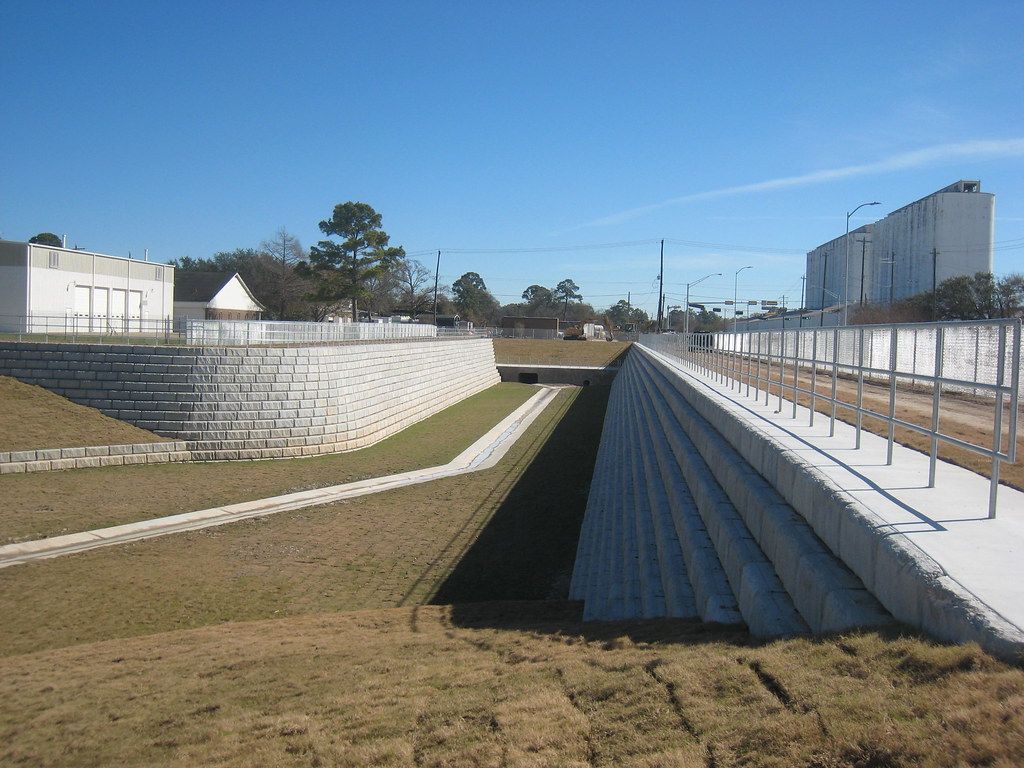 One-ton Redi-Rock blocks interlock and are assembled by crane-construction times are short compared to most retaining wall structures.

"We used recycled concrete aggregate for the backfill wedge and in the active earth pressure zone behind the retaining walls," explains Hines. "That allowed us to use a recycled material, which was beneficial to the project and was popular with the owner. It's also a lightweight material, and when it's compacted in place, it has a very high friction angle that eases the earth pressure on the wall. That helped alleviate some of the bearing stresses and other things we were concerned about with the cement-stabilized sand foundation."

"I have to hand it to Aviles," adds Hines. "They came up with a good way to get the hard foundation soils we needed for a tall gravity wall system. They recommended preparing a cement-stabilized sand zone under the walls-basically, cement was poured in and mixed with the sandy material onsite, and the result is a sort of weak concrete that worked well as a foundation. That overcame a lot of the soft soil conditions and sediment issues the owners were concerned about."

The Redi-Rock system also includes a proprietary software package, basically a sophisticated finite element analysis solution customized for the special problems of retaining walls, in general, and Redi-Rock walls, in particular. Hines used it for design and structural analysis, particularly for the cement-stabilized soil concept.

"It's pretty powerful software," he says. "We use it to model foundation conditions, and look at the global stability and slope stability of all the Redi-Rock walls we design. On occasion, we may need to supplement with some other slope-stability software, but that's only for complex situations we don't run into very often. I'd say for 85 to 90 percent of the Redi-Rock walls we work on, we can pretty much do everything we need to do with the Redi-Rock software." 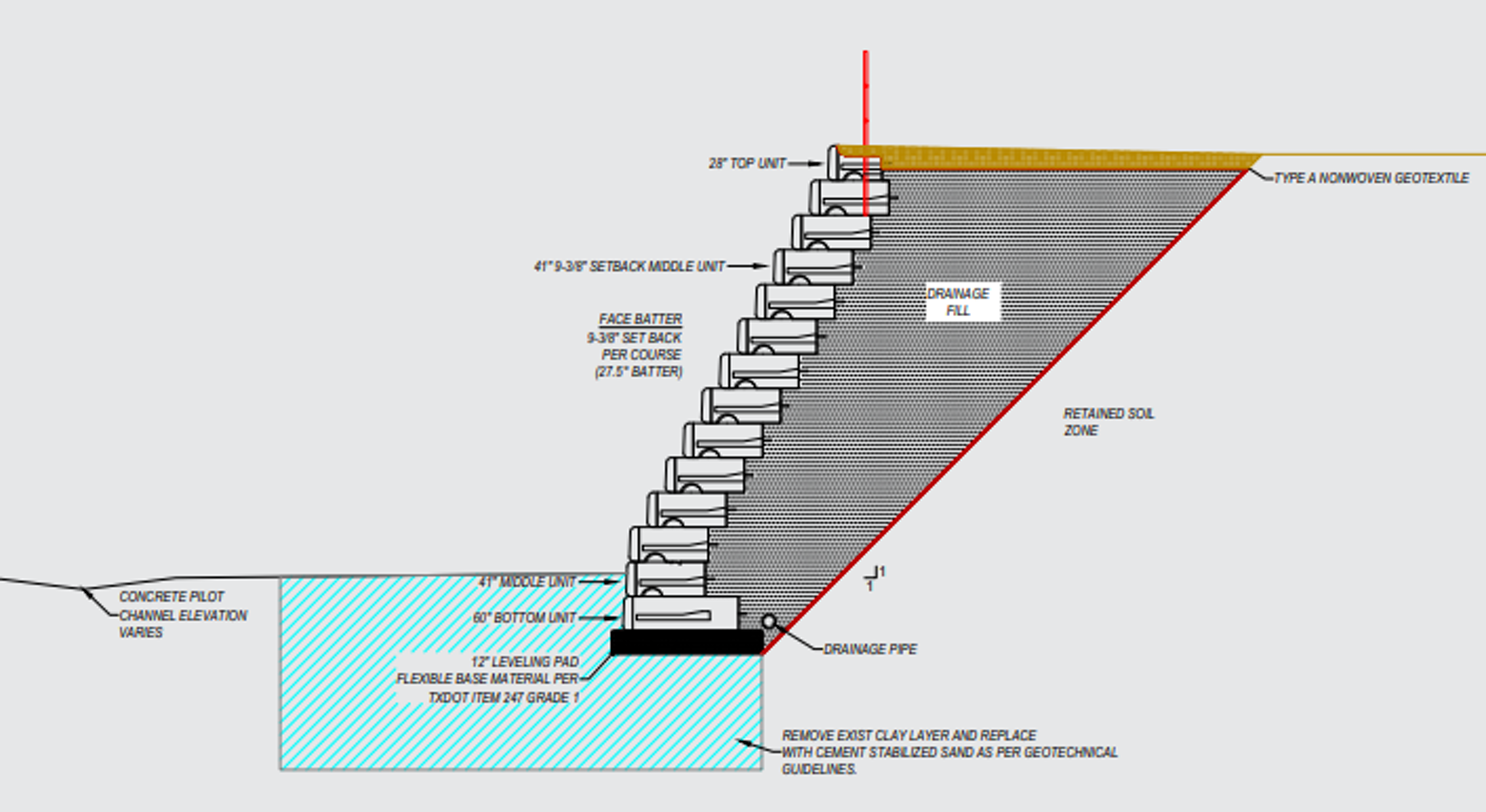 A wall cross section sheds light on how engineers solved the challenges posed by the site.

In this case, he was able to model the proposed foundation solution with enough confidence to sign off on the project's structural integrity. But he also received a second opinion on the foundation that bolstered his confidence even more.

"Two technical engineers at Aviles had done a global stability analysis as part of their soils report, to establish the limits of the improvement zone," adds Hines. "We were able to compare their proposed limits to the results from the Redi-Rock software, and there was only one section where we recommended increasing those limits a little. And that was mainly for peace of mind; it's always nice to get similar results from different software packages-consistency is confirmation that you're getting a good answer."

Hines also credits Aviles for effective insight and communication early in the design phase. "I have to give props to Aviles Engineering for getting out in front of this project and helping everybody involved understand that there needed to be foundation improvements, and then coming up with a solution. That always makes it easier for me-I don't have to be the guy with the bad news who says, 'We can build this, but it's going to cost a lot more than you thought.'" 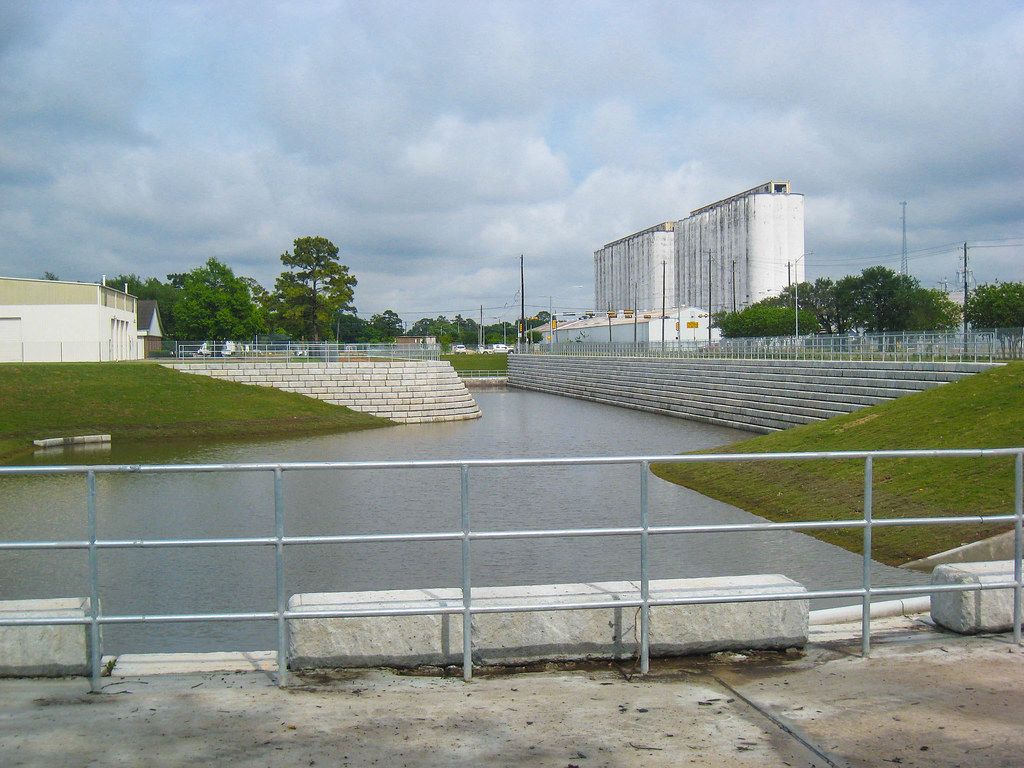 TIRZ 17 prepared bid documents that more or less mandated the Redi-Rock system, and, in fall 2014, the construction project was awarded to Gulf Coast Pavers. During a four-month period, 4,000 Redi-Rock gravity blocks were used to complete the Lumpkin Road detention pond improvements, totaling more than 22,000 square feet (2044 square meters) of retaining wall surface. After completion, the pond's maximum depth was increased to approximately 19 feet (6 meters), adding an additional detention capacity of 20 acre-feet (24670 cubic meters). The completed project is impressive-interested readers can see it for themselves on Google Earth by searching for "Westview and Lumpkin, Houston."

This was a complex project, according to Hines, notable for the height, poor soils and all the other factors previously mentioned. In addition, "retaining walls don't like water, so normally we try to keep water away," he adds. "Obviously, we couldn't do that in a detention basin. But the result was an optimized retaining wall solution that included fundamental elements of sustainable design while delivering cost-effective earth retention structures for a difficult site."