When the Bridges School Early Childhood Program of Greenwich, Connecticut purchased land in 2008, they had big plans for it. This parcel included a vacant historic gable building that was one of the town's first elementary schools and later a community center. The small, progressive early childhood program had outgrown its current facility and moved forward to restore, renovate, and return this historic building to the community as a school for young children. To renovate the historic site, though, was no easy task.

The historic building had only foot access - no driveway and no parking. The property included grade changes that needed to be leveled in order to create enough room for the school grounds and the parking area behind the school.

Greenwich, Conneticut is a historic town, and as such most retaining walls are built from natural quarried stone. For this difficult wall, though, natural stone could not be engineered to construct a 15 feet (4.5 meter) high gravity wall. The engineers needed a system that could meet these requirements, but also match the historic look of the town. 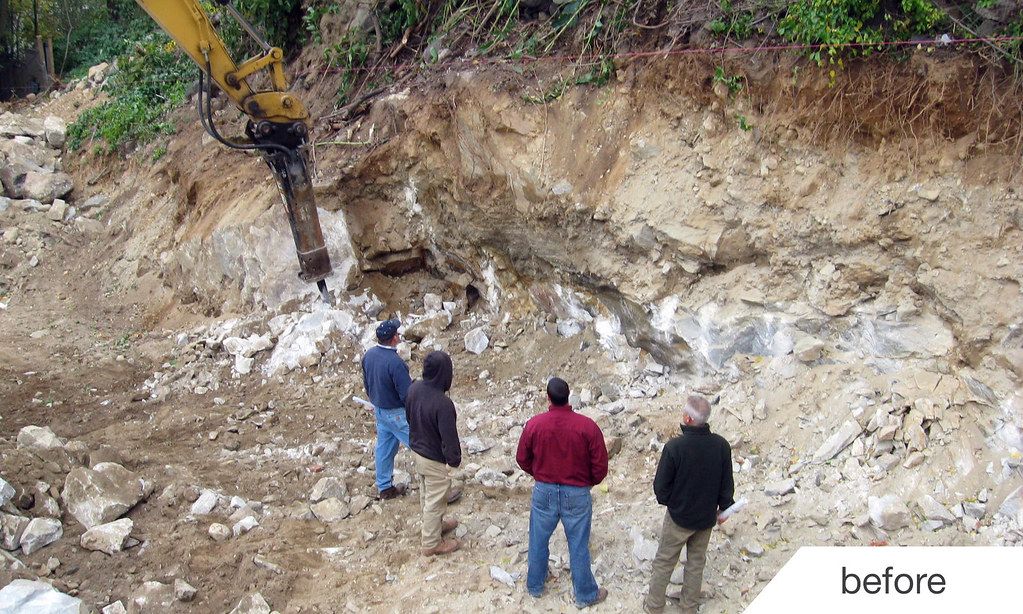 The location of this project presented several challenges including a very small construction site and a swimming pool near the property line above the proposed retaining wall.

This is where Redi-Rock fit in. Redi-Rock is a wet-cast concrete wall system that combines the structural stability of an engineered concrete block with the color and texture of natural stone. Redi-Rock's massive one ton blocks interlock, harnessing the power of gravity to allow the construction of taller walls that often don't require reinforcement. This allows walls to be built closer to property lines, in turn saving valuable space for developments like the Bridges School. Redi-Rock also saved the school about 50 percent of what a natural stone wall would have cost.

"It's really stable and looks nice. We certainly liked the product," said general contractor and part owner of the school, Dick Williamson. Williamson's wife Connie is the founder and co-owner of Bridges School and is also a teacher there.

In order to obtain the necessary permission to build the wall, Carrier Wall Systems' owner and registered engineer Johnny Carrier presented the Redi-Rock gravity solution to the Greenwich Historic District Commission. The Commission reviews proposed changes to structures and landscapes within the Historic Districts and promotes the preservation of historic structures and landscapes. As part of this effort, the commission is often opposed to allowing retaining walls other than natural stone walls to be constructed within the Historic District.

As a P.E., Carrier was not worried about presenting the structural benefits of the Redi-Rock solution - "that was the easy part," he said. The hard part was finding a creative way to show the commission how natural the walls could look. Faced with this challenge, Carrier collected two rock samples with different colors from the area near the school and returned to his shop. There, his team created concrete stain colors that replicated the natural stone colors to apply to the Redi-Rock Cobblestone texture blocks. Carrier took these color samples along with the natural stones to the historic commission meeting where he presented the Redi-Rock solution.

"They were surprised at how closely we were able to match the colors," Carrier said.

The approval process took about two and a half years, but the commission eventually approved the wall. 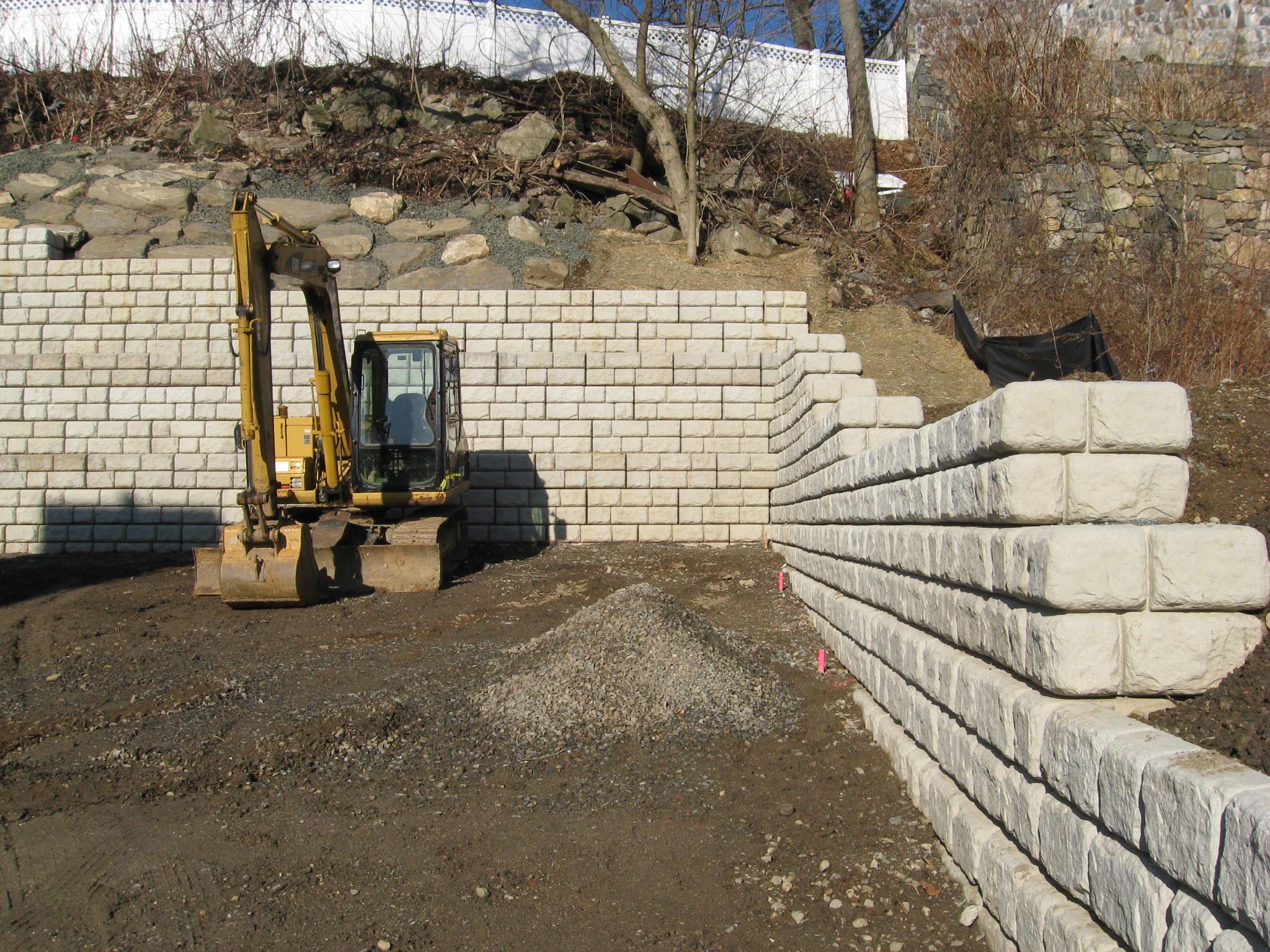 It took just 10 days for the installation of this 2,500 square foot (232 square meter) gravity retaining wall.

When construction began, Carrier's crew discovered that ground was glacial till and bedrock, which required additional geotechnical engineering analysis and delayed construction. When construction finally resumed right before Christmas in 2008, the entire 2500 square foot (232 square meter) wall went up in about 10 days.


Because the wall had to be built in such a narrow space and excavation behind the wall was limited due to the pool above, reinforcing the wall using geogrid was not an option. Therefore, the wall was designed as a gravity wall, utilizing Redi-Rock's 60in (1520mm) blocks in the bottom two courses of the wall as well as in a middle course of the wall. The glacial till and bedrock had to be chipped out and hauled away, keeping in mind the pool directly above the wall. The design also called for two planter blocks which increased the setback of the wall and further increased stability. The slope above the wall was too steep to vegetate and was stabilized by layering flat stone.

In the spring of 2009, Carrier's crews returned to the site and stained the wall to match the natural stone coloring of the area.

"They did a nice job of staining the concrete. We'd recommend Redi-Rock very highly to anyone considering retaining walls," Dick Williamson said. 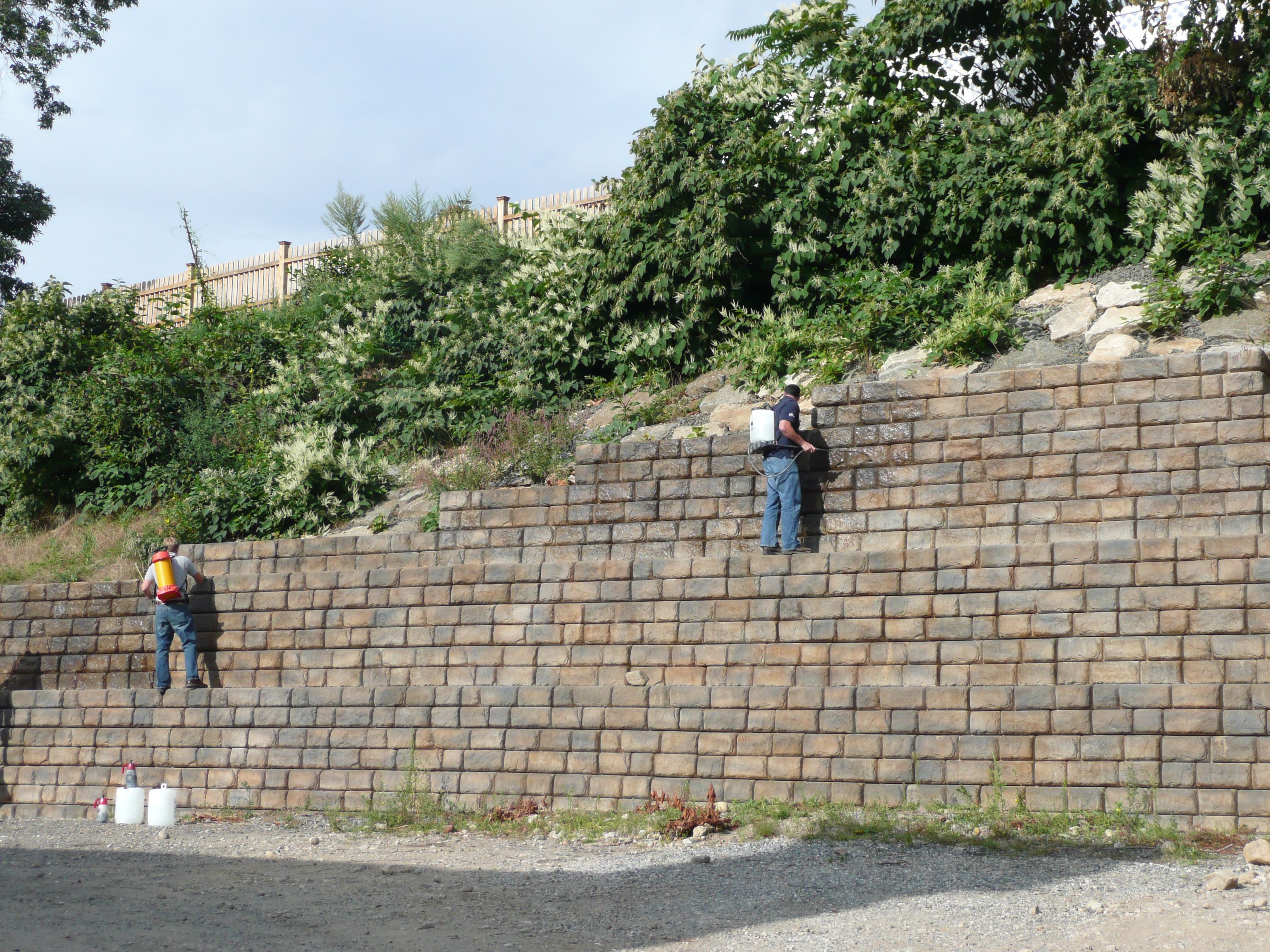 When construction of the Cobblestone textured retaining wall was completed, crews stained it to match the natural stone coloring in the area.