In 2013, the town of North Haven, Maine, began construction on a very unique bridge project. The goal was to re-build a deteriorating bridge that provided access to four seasonal homes and was an important wharf for the local lobster industry.

The town faced several challenges with this project: 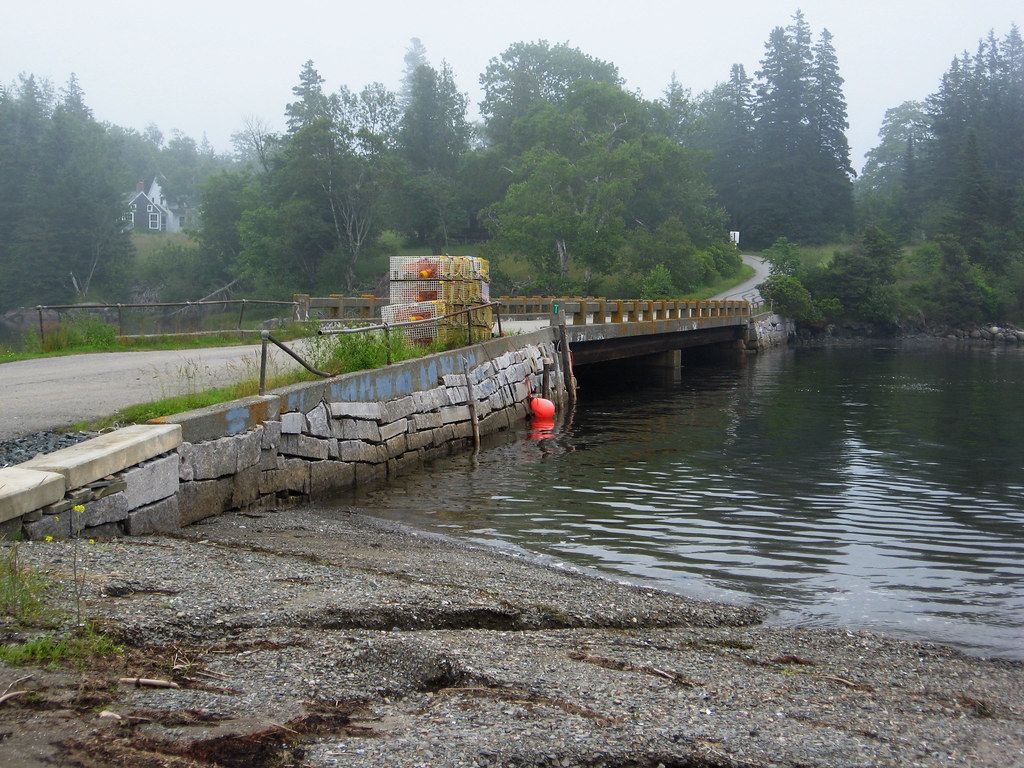 The remote location of North Haven led the design team to search for a simpler solution than a typical pile driven foundation for the bridge abutments. The solution was a Geosynthetic Reinforced Soil - Integrated Bridge System (GRS-IBS), completed as a joint effort of the town of North Haven and the Maine Department of Transportation.

"A GRS wall was by far the cheapest and easiest to incorporate in that type of environment," explained Josh Olund, P.E. of T.Y. Lin International. "This is the first time a GRS wall has been used in a marine or tidal environment. It's also the first time being used in a 2 span bridge arrangement," Olund said.

"The main difference between a GRS wall and a traditional, mechanically stabilized earth (MSE) abutment wall is that reinforcing fabric is used in much more closely spaced layers, and the fabric is not geogrid," explained Jeff Benway, P.E. of SFC Engineering Partnership, Inc. "What's typically used is more like a filter fabric. It doesn't have the same strength as geogrid, but it's much more closely spaced - every 6 to 9 inches (150 to 230 millimeters) versus every 18 inches (457 millimeters) with a traditional Redi-Rock wall. This allows the fabric to act as a tension element in the soil. The facing unit isn't really retaining the soil at all; it's simply preventing erosion of the reinforced soil mass."

The existing bridge pier was reused to cut down on cost and time, which was important because the project needed to be completed during the winter and the spring. They were able to reuse the bridge pier by using lightweight concrete beams that were specified by the engineering team.

The Limestone textured Redi-Rock blocks matched the aesthetic look of the existing bridge pier, and fit in with the natural look of the environment.

"This is located in one of the most spectacular sailing harbors along the coast of Maine," explained Joe Stone, North Haven administrator. "It was important that the natural scenic beauty of the site not be damaged by the bridge." 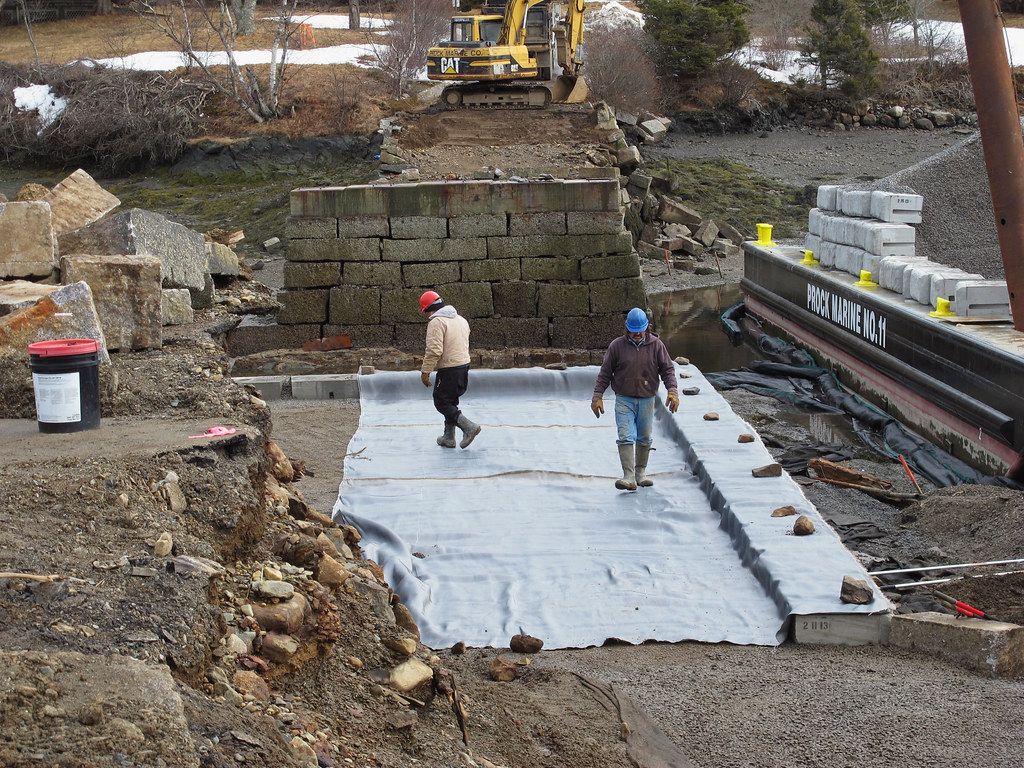 The unique GRS solution used on this wall was the first of it's type used in a marine or tidal environment.

Redi-Rock of Central Maine supplied the zero batter, Limestone texture Redi-Rock blocks. Since the bridge abutment is partially submerged in the ocean at high tide, the blocks were cast using a low permeability concrete mix that met all Maine DOT specs. These blocks were unique in that they required flat tops and bottoms with no shear knob or groove, which are a standard part of any Redi-Rock block.

This custom block design allowed the geosynthetic fabric to be sandwiched between the flat blocks. The design also included intermediate, non-attached layers of Tencate Mirafi HP 770PET fabric located at mid-height of the blocks (every 9 inches, or 230 millimeters).

A benefit of using wet cast, precast modular blocks in a project like this is that the installation crew could compact the reinforced soil mass right up to the back of the blocks. The massive size of each Redi-Rock block allowed the facing structure to handle compaction of the soil directly behind it.

"This area doesn't get wave action, but there's a very large tidal change - around 6 to 8 feet (1.8 to 2.4 meters). They wanted to use a larger block system that could withstand the tidal changes as well as potential impact from boats," Benway said.

Even though the tidal fluctuations posed a challenge to the installation, the crew was able to beat their original schedule, according to Olund. The overall duration for the project was about 4 months, which included everything from demolition through construction.

"It's been widely accepted by the property owners that abut it and the fishermen who use it," Stone said. "People appreciate the fact that it's more robust and safer than its predecessor and built to modern standards." 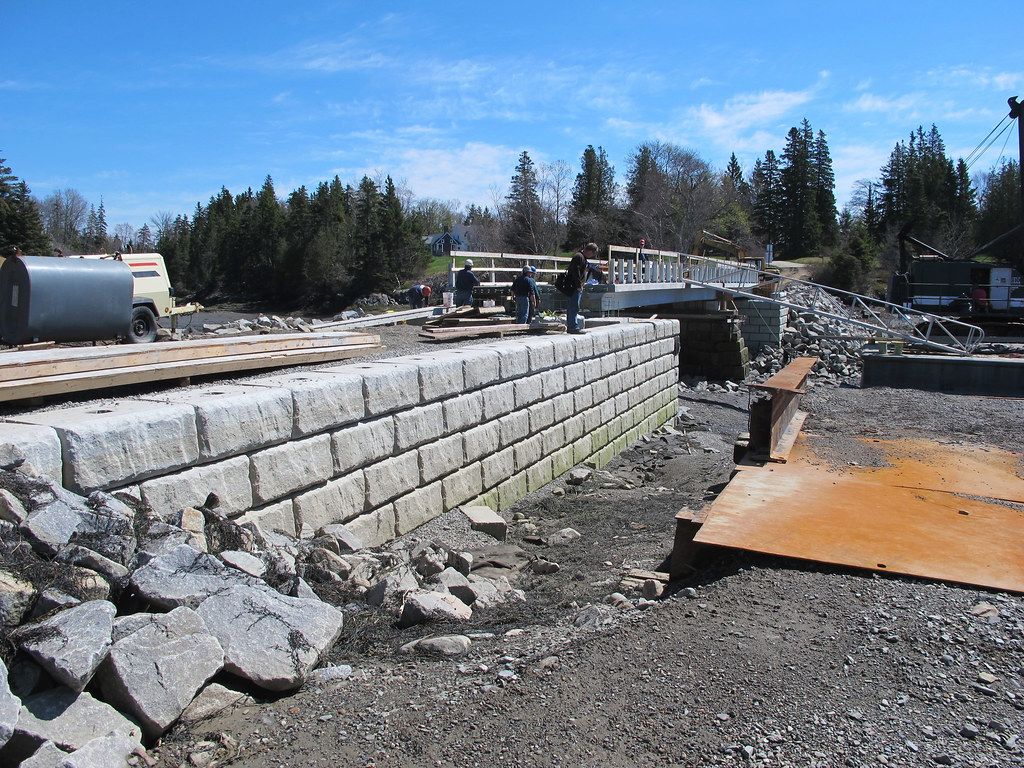 In total, 1,918 square feet (178.2 square meters) of Redi-Rock Limestone blocks were used on this project.

In this informational webinar, project engineer, Jeff Benway, P.E. and local Redi-Rock sales rep, Carl Jordan from Redi-Rock of Central Maine, speak about how this GRS-IBS project came about and how it was designed.