The Razorback Greenway in Northwest Arkansas had its skeptics when the project was unveiled. People wondered if the bike path would only appeal to extreme cyclists. However, the trail system has become a resounding success across demographics, with a major economic impact in the region.

The City of Rogers, Arkansas played a key role in creating the Razorback Greenway, a 37-mile multi-purpose pedestrian and bicycling trail that connects six cities. Originally, the trail used existing infrastructure as much as possible, but as the system grew in popularity, it became a priority to separate pedestrian and cycling traffic from busy roadways and intersections. This was the challenge the City faced in 2017 as it improved the Bellview Road bridge and associated stormwater infrastructure.

The City had several objectives with this project:

Cross sections from the engineering plans show the 9in setback blocks (left), as well as the standard 5 degree batter with 60in blocks used at the base of the wall (right), to achieve the necessary heights for the project without using geogrid.

Redi-Rock 9in setback blocks allowed engineers to achieve the heights necessary for these retaining walls, without requiring geogrid tiebacks.

Aesthetics also played a role in choosing Redi-Rock; because this is a highly visible portion of the trail, City officials chose Ledgestone texture, colored to coordinate with the natural stone in the area. The stone texture of the walls also complimented the natural setting of the Greenway while providing the structural integrity needed. Portions of the wall were topped with freestanding blocks and caps to create an aesthetic finish on both sides of the wall.

The Redi-Rock Ledgestone retaining walls allowed the city to create an aesthetic focal point for this highly visible portion of the trail.

BEFORE: In this aerial photo of the Bellview Bridge project, you can see what the area looked like before this project took place. 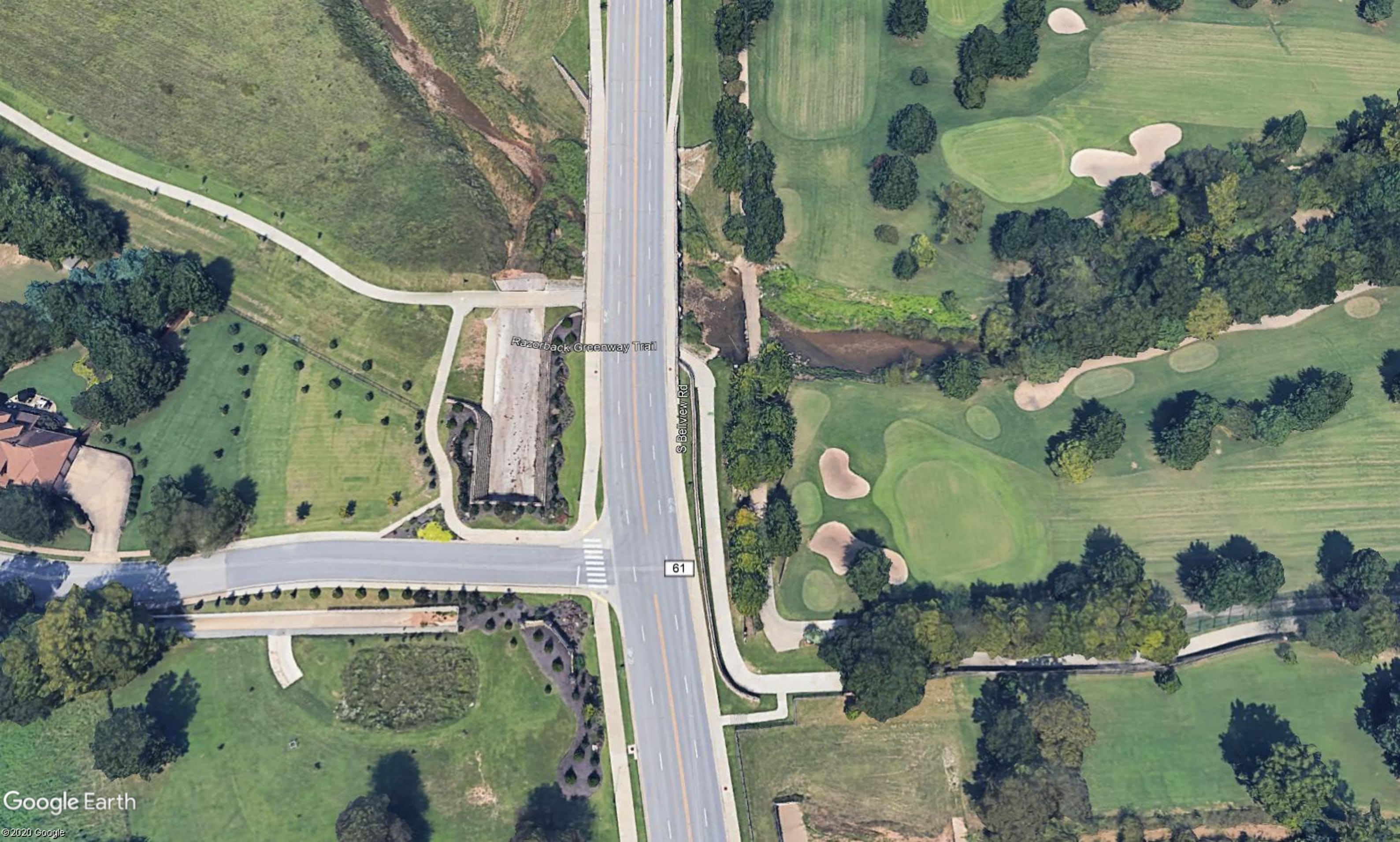 AFTER: By using Redi-Rock retaining walls for the bridge wing walls, the stormwater floodway, and the triple box culverts, engineers were able to provide a solution for this challenging project.

Funding for the larger Razorback Greenway project came from a $15 million donation from the Walton Family Foundation, which was matched by the U.S. Department of Transportation. At first, the trail system had plenty of skeptics. "Folks wondered why we would spend a dime on something like this. They assumed the only benefactors would be the extreme cyclists, the spandex crowd," John McLarty, the former assistant director of the Northwest Arkansas Planning Commission and project manager for the Greenway explained to the Walton Family Foundation.

However, the trail's usage has surpassed anyone's estimates and remains busy constantly with pedestrians, casual cyclists, and families - as well as that spandex crowd. As a result of the 37-mile trail's completion, the Walton Family Foundation reported in 2018 that "a cycling subculture has sprung up in the treads of this project. In the breweries, shops and activities geared toward riders, cycling generated $137 million in economic benefits to the region in just the last year."

With this project, the City of Roger made the Razorback Greenway more safe and accessible for pedestrians and cyclists of all abilities. As multi-use trails continue to grow in popularity, local and regional governments are challenged to change their corners of the world in concrete ways. How can Redi-Rock help on your next project?