When Lemmie and Wanda Rockford were preparing to retire in 2001, they purchased some property and a house on the Columbia River near Cathlamet, Washington. The property slopes steeply down to the river, providing stunning views but little usable yard space. The steep bank was difficult to maintain as it was covered in blackberry brambles and weeds.

After several years in their new home, the couple wanted to free up some space for a yard as well as prevent their bank from eroding.

"We looked at several things. One option was to tear it up and do ground cover," Lemmie said.

But the Rockfords wanted to create a flat, level area they could use to plant a garden and some fruit trees, and building a retaining wall seemed like the best way to achieve that end. 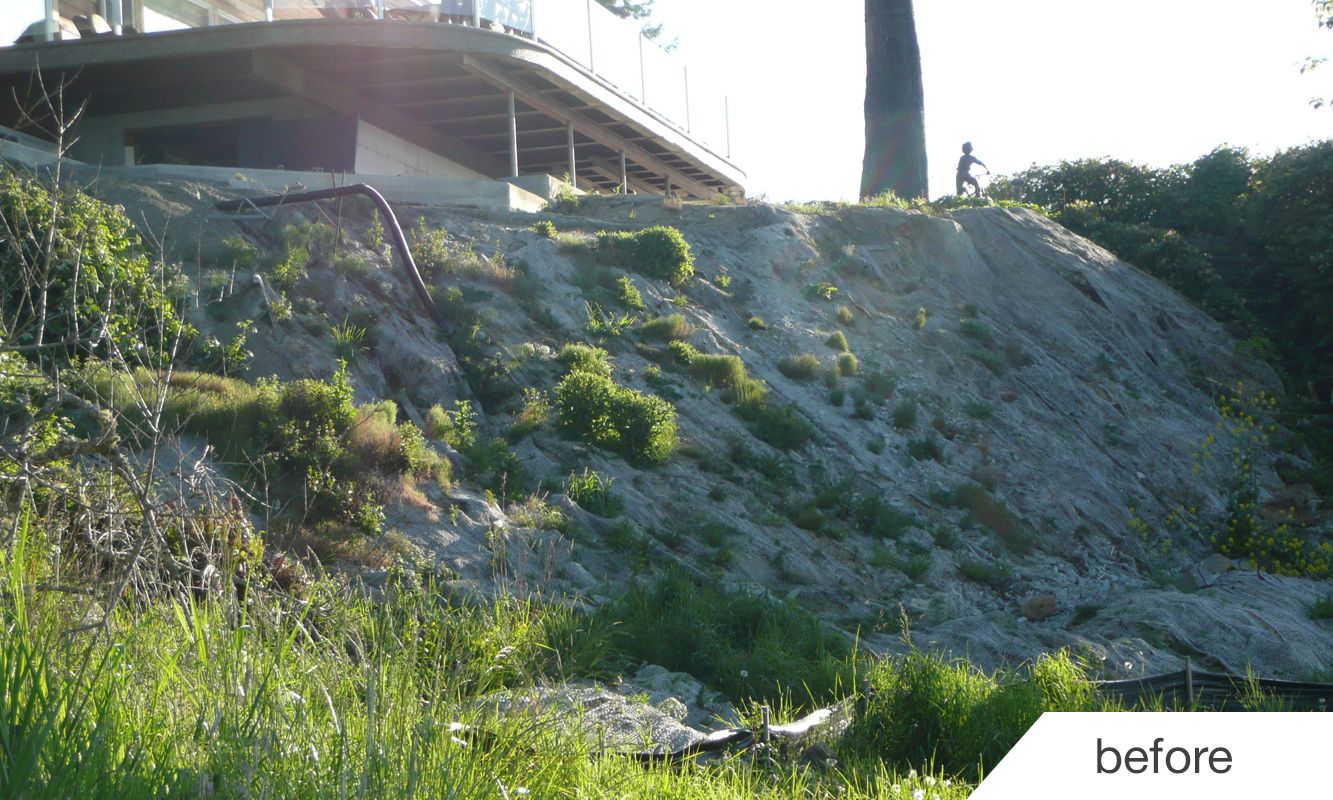 The owners of this home turned to Redi-Rock for retaining walls to help prevent erosion on their property as well as create more usable yard space.

While driving near their home, the couple spotted some large concrete retaining wall blocks called Redi-Rock in a landscaping yard and stopped to check them out. They discovered that the one-ton (0.9 metric ton), Cobblestone texture blocks were known for their ability to build taller gravity walls than other retaining wall products on the market. Lemmie was also impressed with the ease of installation of the product - it was so simple, in fact, that the former pipeline construction company owner decided to install the Redi-Rock himself with the help of a small crew.

To prepare the site for wall construction, Lemmie poured a footing for the first course of gravity blocks to be placed along the beach. For the footings in the other tiers of the wall, a 2-3 feet (0.6-0.9 meter) deep leveling pad of crushed rock was compacted to make a suitable leveling pad.

"The contour of the ground dictated what we could do," Lemmie said, referring to the design of the walls. 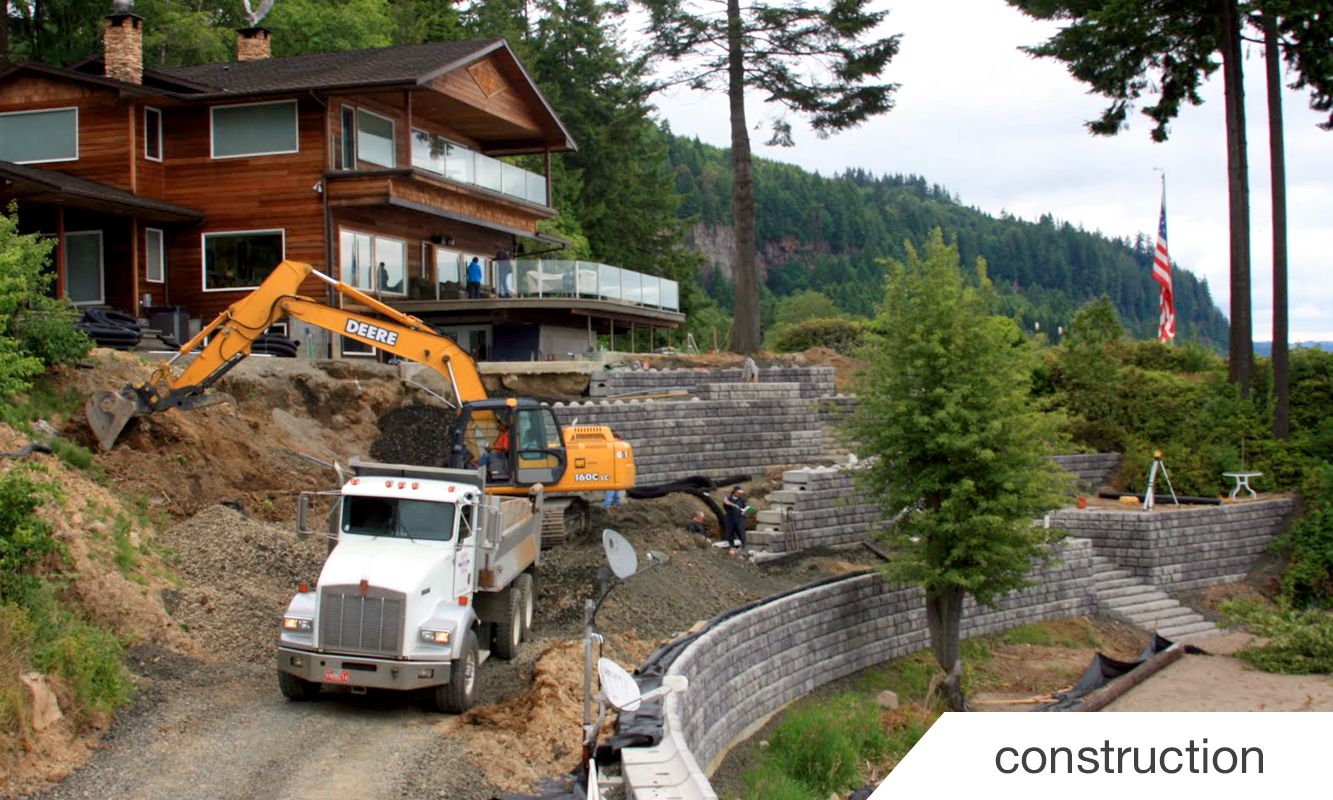 Four tiers of gravity retaining walls in the Cobblestone texture were used to complete this project.

The walls are built in four tiers with approximately 10 feet (3 meters) between each tier. A staircase built with Redi-Rock step blocks cuts through the walls and provides beach access.

We love the way things are turning our here. We're still in the process though," said Wanda Rockford.

"I feel really confident with the Redi-Rock; I've been in construction my whole life. We had a really wet winter this year and nothing moved at all. I'm confident the walls are here to stay," Lemmie said.

While working with the Redi-Rock retaining walls, Lemmie came up with an idea to add a creative touch to his landscaping. The Redi-Rock archway he designed is the first of its kind.

"I just wanted something a little different so I sat down and sketched out what I wanted. I took it to the Redi-Rock manufacturer and he said we could do it," Lemmie explained.

The design involves Redi-Rock 28in (710mm) column caps which Puget Sound Precast of Tacoma, Washington manufactured custom for the project. The concrete form was adjusted so that one side of each column cap was poured at the standard 6 inches (152.4 millimeters), while the opposite side was poured to be 3 inches (76.2 millimeters) tall. This allowed the blocks to form an archway without the need to cut the blocks. The blocks were grouted together to form the archway.

"We're just tickled to death with it," Lemmie said.

The have also built several other Redi-Rock walls around the property, including a four foot (1.2 meter) tall freestanding wall that faces the front of a building and another retaining wall near their workshop. 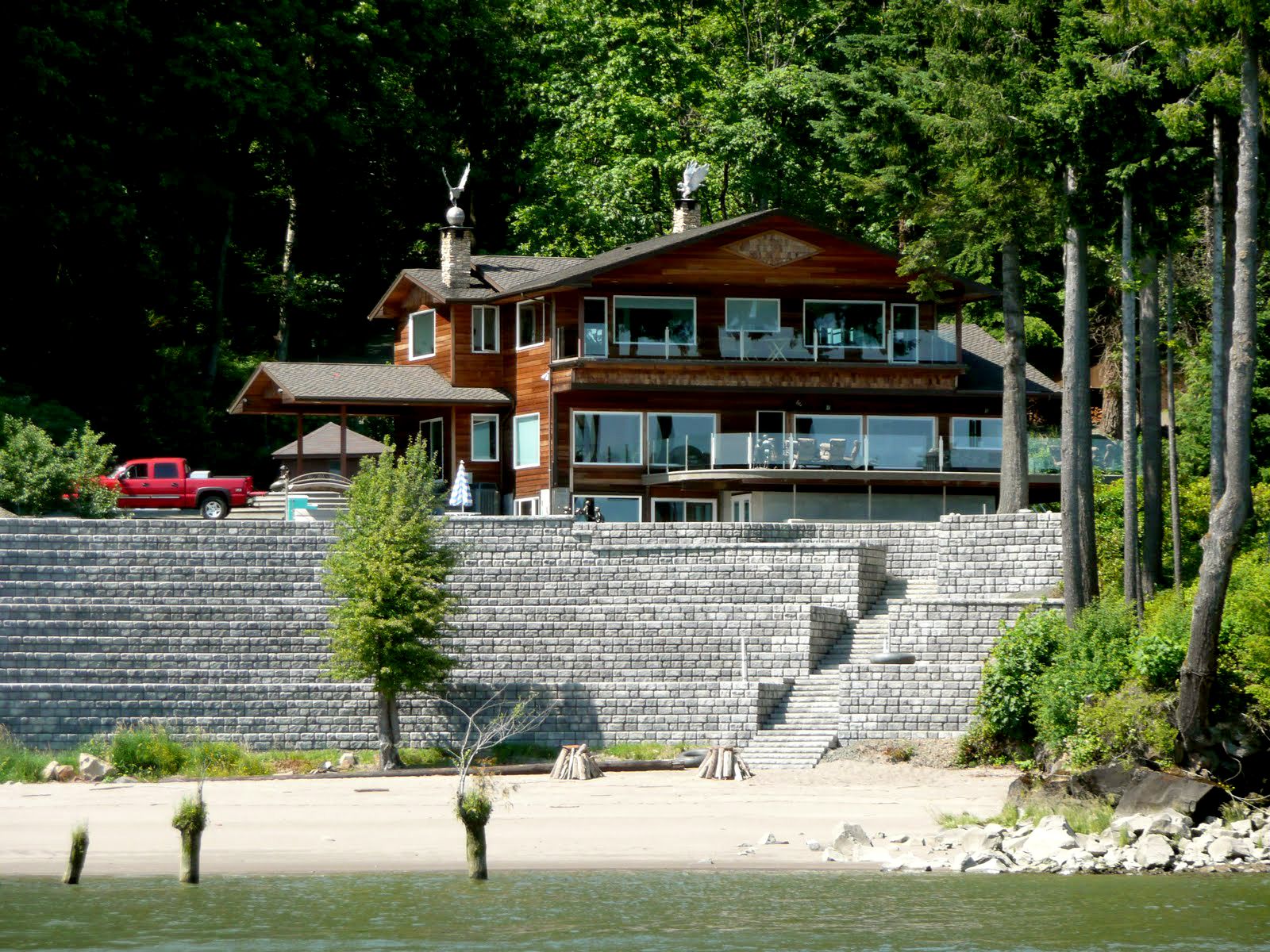 Redi-Rock steps, caps and freestanding walls were also used on the property to coordinate with the beautiful Cobblestone gravity retaining walls.