When Barry Ross' family purchased a home on Possum Creek near Chattanooga, Tennessee, Barry knew the shoreline needed some work. The existing retaining wall (part brick, part railroad tie) was rotting and crumbling away, exposing the shoreline to wave action and boat wakes. Every year, more of the Ross' yard was lost to the lake and in 2009, it was time to tackle the erosion issue once and for all.

My business, Chattanooga Hardscapes, specializes in retaining walls-primarily on residential projects. When Barry contacted us and we came on site, the old cross tie wall was about 50 percent gone and had allowed extensive erosion of the yard. Over the years, the ties had fallen into the river and the erosion just kept getting worse. While the erosion wasn't a threat to the house, it was unsightly and the owner wanted to prevent additional erosion of his property. 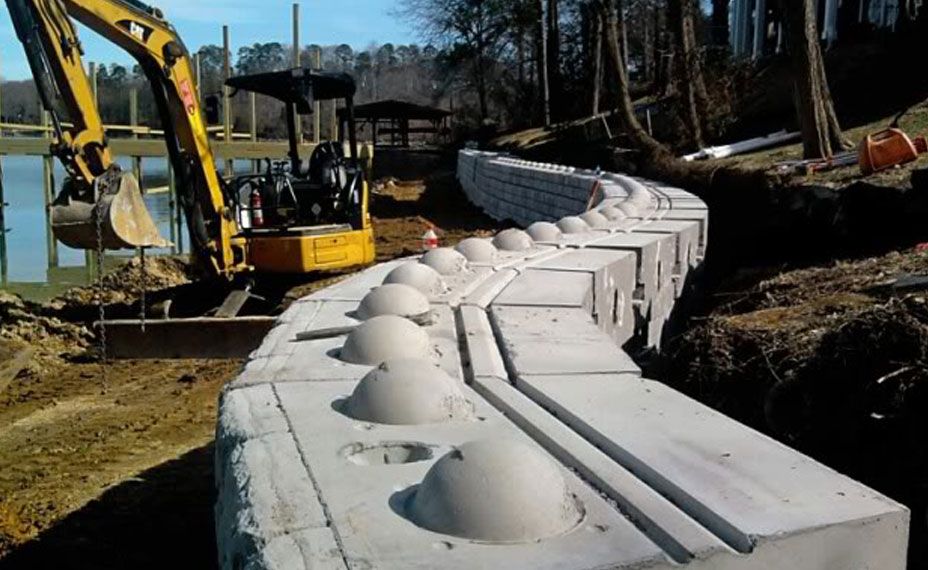 Redi-Rock installs quickly and can be used to make curved walls.

Initially, we considered going with a 125 pound (57 kilogram) stacking block that had been used by several adjacent properties, but the blocks weren't available in the area anymore. The next available size was an 85 pound (38.5 kilogram) block, but Barry wanted to be absolutely certain the wall would not need replacing in the near future. When I saw the scope of this project, I recommended using 2,500 pound (1130 kilogram) Redi-Rock blocks. I had seen Redi-Rock used in several shoreline protection projects in the past and I knew that the scale of the system basically guaranteed that the wall would never move. That's a definite plus at a site that has seen at least two retaining wall failures in the past.

In addition to building a new retaining wall, the homeowner wanted a system that would allow him to integrate a new dock as well. The wall design called for about 270 Redi-Rock blocks which would stretch along the property's edge-a distance of approximately 200 feet (60 meters).

Barry took care of the permitting process through the Tennessee Valley Authority (TVA). TVA Act 26A governs construction on the shoreline of the Tennessee River and its tributaries. It was an extremely wet winter here in Tennessee, so we began construction in January of 2010 when the water levels were the lowest of the year.

Bradley Tank and Pipe, the local Redi-Rock manufacturer, helped design the project and determined that the wall could be built as a gravity structure due to the massive scale of the blocks.

Using Redi-Rock cut down on our installation time significantly, because the one-ton blocks are set by machines rather than by hand. At 7.5 feet (2.29 meters) tall, the wall didn't require reinforcement, which also minimized the amount of excavation the project required and the time. Our crew consisted of myself and one other person. Our equipment included a mini excavator and a skid steer loader. 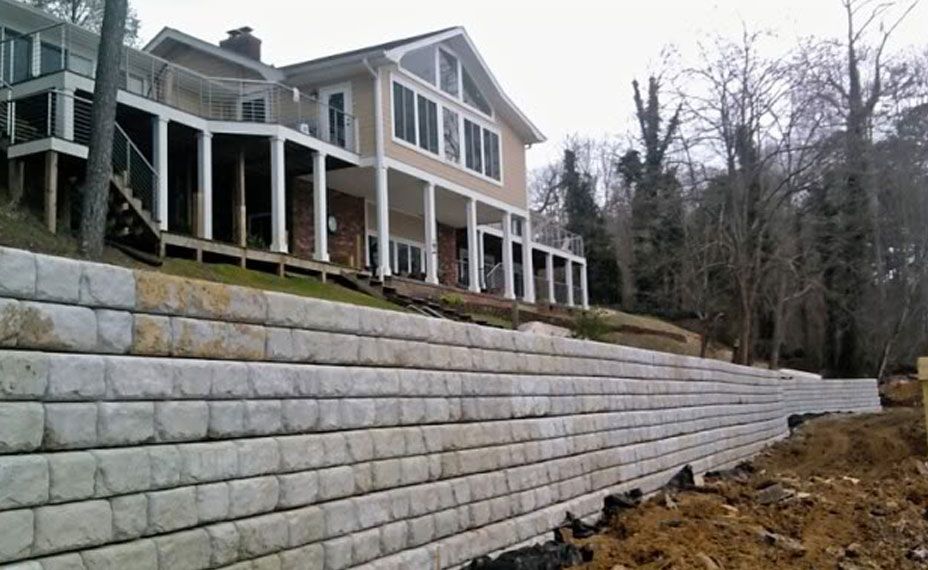 The wall design called for about 270 Redi-Rock blocks which would stretch along 200 feet (60 meters) of the property's edge.

To begin construction, we installed a one foot (305 millimeter) deep gravel footing before installing the first course of blocks, which were buried according to Bradley Tank and Pipe's design. The wall site was a challenge to access; we had to unload the blocks from the delivery truck using the skid steer, then haul them about 300 yards (274 meters) through the woods on a trail we cleared to the staging area. We would line up 10 to 15 blocks, and then I would begin maneuvering the blocks into place using the excavator. The installer was attaching the lift chain to the blocks and guiding them into place.

After we installed the footing and first course of blocks, a very heavy rainstorm caused the water level to rise about six feet (2 meters) over the top of the blocks-which made us a little concerned for the stability of the wall since it wasn't yet finished. When the water level finally dropped again though, the wall hadn't settled even a fraction of an inch; we were very pleased.

The wall only took us about 23 working days to install-but due to rain delays, those 23 days were spread over the course of two months. This was our first Redi-Rock wall, but it was easy to install because it's like stacking Legos-really big Legos. That made it fun and easy to work with and we enjoyed the process a lot.

"We've had very favorable comments from neighbors and friends since the new wall was finished," Ross said. "And of course it improves the neighborhood by replacing the unsightly wall that was there previously." 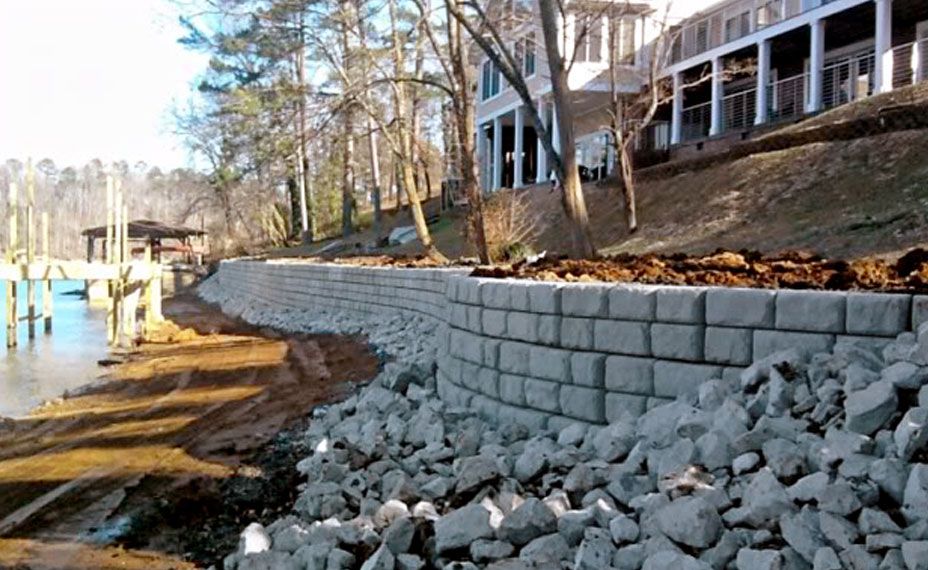