Like many growing cities, Santa Fe has faced significant stormwater problems. As the population has grown, runoff has increased, causing significant erosion to the Santa Fe Riverbed. Erosion was so significant in some areas that the riverbed dropped nearly 15 feet, threatening homes and infrastructure with the collapse of the river channel.

The City wanted to take this threatened river corridor and improve it to protect homes and businesses as well as create a multi-use pathway that runs along the river. To get started, they brought in the environmental services group, Weston Solutions.

"The Santa Fe River could be more accurately characterized as an arroyo (dry wash) for most of the year, with a bed composed largely of alluvial decomposed granite, cobbles, silt, and urban detritus. During spring runoff and monsoon season, however, the river can become a roiling torrent, leaving debris in its wake and deep scars in the riverbed," explained Robert Oberdorfer, who was a Senior Landscape Architect at Weston Solutions at the time of the project.

In 2007, the Santa Fe River received two distinctions: America's Most Endangered River by American Rivers, a Washington, D.C. based advocacy group and also one of New Mexico's 12 most endangered places by the New Mexico Heritage Preservation Alliance.

"The tipping point came when hundreds of yards of aging wire-tied riprap, installed to protect adjacent residences, finally succumbed to twenty years of abrasion from the silt-laden runoff and lost its integrity, dumping tons of stone into the riverbed and again threatening to undermine adjacent properties," Oberdorfer said. 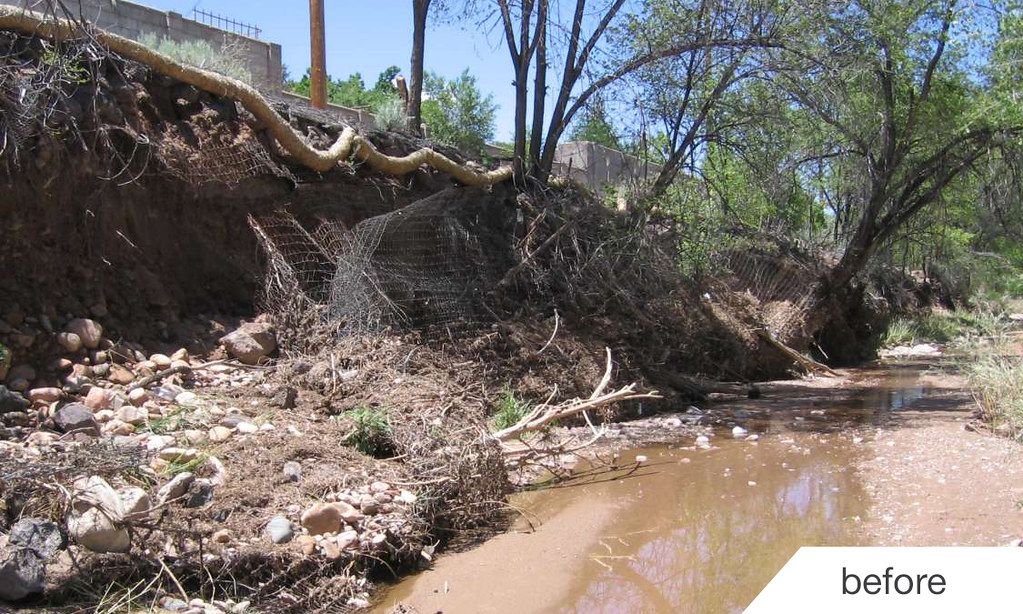 Significant erosion of the Santa Fe River landed it a spot as one of New Mexico's 12 most endangered places by the New Mexico Heritage Preservation Alliance in 2007. (Picture provided by Robert M. Oberdorfer)

"No one (including those of us on the consultant team) wanted a concrete-lined channel - which would have been the only sure-fire way to control the aggressive erosion that was occurring. The final solution became a hybrid approach, blending elements of natural channel design with more traditional hydraulic engineering underpinnings," Oberdorfer said.

The design team needed a solution that could withstand the massive amounts of water the river would eventually contain. The first priority included widening the river channel to reduce flow velocities. To accomplish this, the team designed a meandering low-flow channel capable of handling the 1-2 year frequency storms without overtopping. They also designed overbank terraces to widen the channel and and create up to 100 feet (30.5 meters) of floodway width to meet peak design flows of more than 9000 cubic feet per second (254.9 cubic meters per second).

"In several areas of severe erosion, structural retaining walls were required to protect the banks and support the trail and adjacent private properties above the river channel," Oberdorfer explained. "These walls took two forms: the majority were constructed of limestone boulders matching those in the grade control structures, but mortared in place to prevent water from scouring behind them, while one test section used large prefabricated modular concrete blocks sculpted to look something like a stacked stone wall." 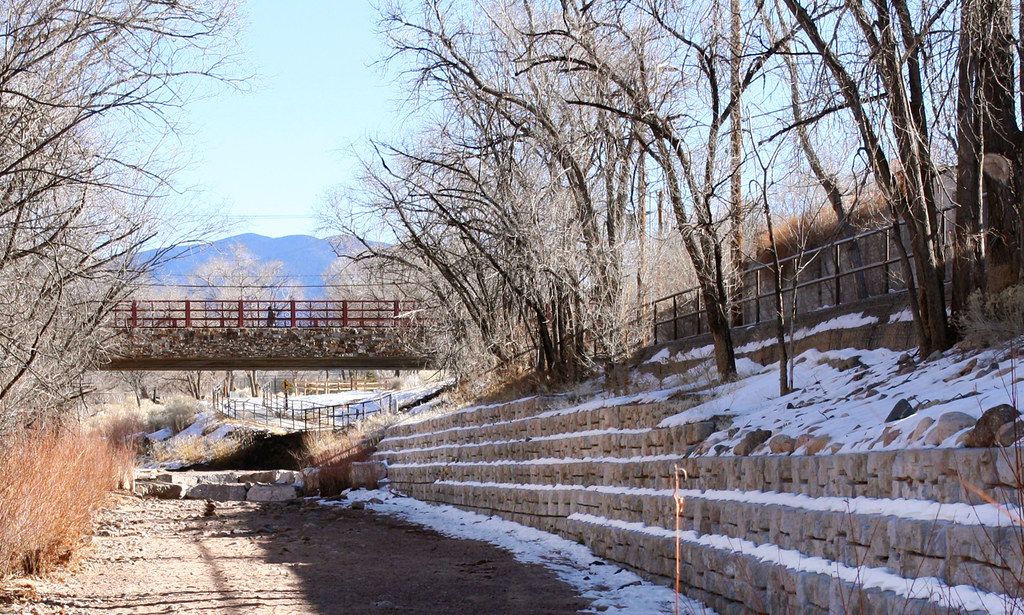 Redi-Rock 9in (230mm) setback blocks were used which are beneficial for stormwater projects because they create a more gradual slope for safety.

Redi-Rock is an engineered precast retaining wall system that uses massive, one-ton blocks that stack up like giant Lego blocks. The blocks are composed of wet-cast concrete, which is engineered to perform well in water applications and withstand freeze-thaw cycles. Because the blocks are so massive, the Redi-Rock system can rely on gravity to hold the wall up, rather than geogrid reinforcement in many applications like this one. Gravity walls require less excavation, minimizing disturbances to nearby homes and infrastructure, as well as saving existing vegetation.

This project utilized Redi-Rock 9in (230mm) setback blocks, which step back 9 inches (230 millimeters) per course to create a more gradually walled slope. This is often beneficial for stormwater projects because it allows taller walls to be built without reinforcement, and it also creates a more gradual slope for safety as well.

The Redi-Rock wall tied into the natural limestone wall as well as boulder veins. "Boulder veins help with diverting the water in the direction it needs to go," explained Bryan Klock of local Redi-Rock manufacturer Materials Inc. "It helps divert the water where there's a step down within the system. The boulders were placed on the back side of the Redi-Rock protruding planter blocks to tie the whole structure together."

Santa Fe is an artsy, historic town that didn't want a "run of the mill construction look," explained Klock. To keep the channel looking as natural as possible while still providing an engineered solution, the design team chose the Redi-Rock Ledgestone texture, which is cast in molds taken from real natural stone to give it the most natural look possible. Manufactured locally by Materials Inc., these Ledgestone texture blocks were colored to match the natural stone in the river bed, including a historic stone wall built along the upper reaches of the river by the Civilian Conservation Corps in the 1930s.

"Redi-Rock was basically the only answer for the project. It fit all the aesthetic design requirements as well as the structural requirements," said Don MacCornack, P.E. of MacCornack Engineering who designed the walls on the project. 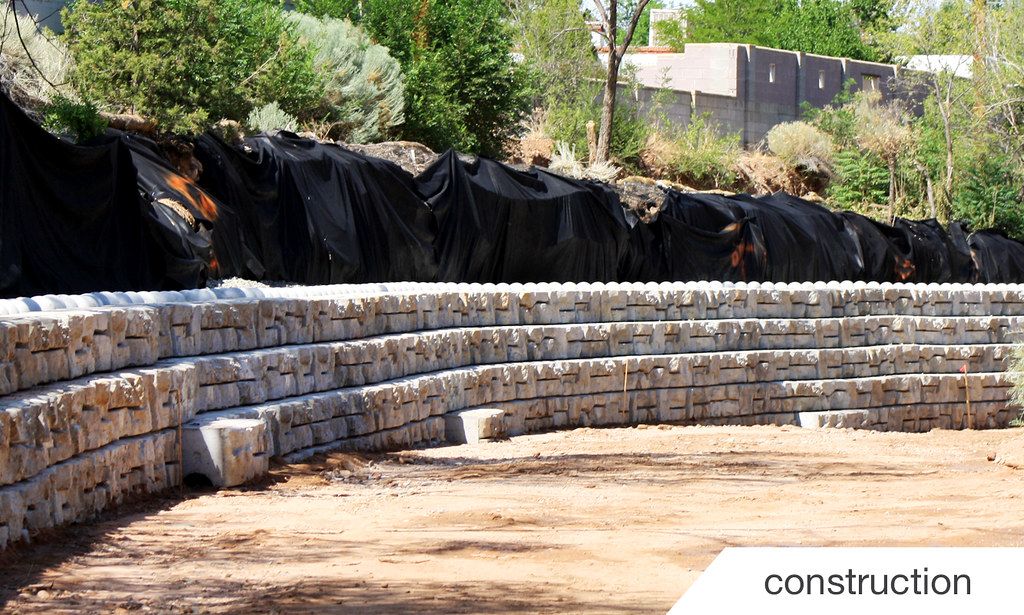 R.L. Leeder was the wall installer for this project. The 7,800 square foot (724.6 square meter) retaining wall took about 12 weeks to build.

"Putting in that bottom course is what takes you the time," Klock explained. "You've got to make sure that base course is 'dead level' exactly the way you want it so you're sure the rest of your wall goes in smoothly."

The installation crew utilized 2 excavators, a loader, a backhoe, and a roller for the Redi-Rock portion of the project. The wall was 2,000 lineal feet (609.6 lineal meters) with a maximum height of 15 feet (4.6 meters). In some areas, 7 feet (2.1 meters) of the wall was below grade.

"The guys were really the key to how fast that wall was built. We were in a very small area of the river," said Greg Smith of R.L. Leeder. The blocks were staged down river, then transported up to the construction site.

According to Oberdorfer, the Ledgestone texture was not available in the area before this project. With coordination between Materials Inc. and Oberdorfer, the investment was made into the Ledgestone molds, and since the construction of the Santa Fe River Trail, many projects have been constructed around New Mexico with the same texture. 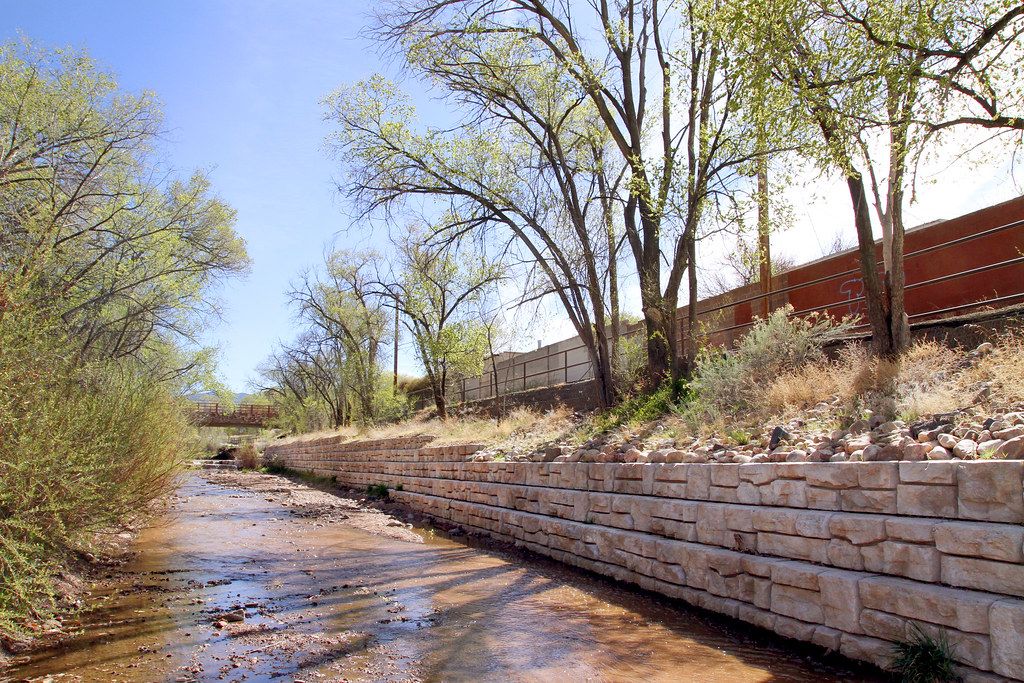