As part of the city of Tulsa, Oklahoma's ongoing stormwater initiatives, the banks of South Fork Joe Creek needed to be stabilized. This portion of the creek runs through a residential neighborhood and had caused its fair share of damage.

"The backyards were just eroding away. The creek was getting closer and closer to the backs of the houses," explained Dave Welzenbach of SI Precast, Tulsa's exclusive Redi-Rock manufacturer.

Tulsa is in a relatively flat location and as the city has grown its metropolitan area, the increase in impermeable surfaces has caused the runoff into the creeks to increase dramatically. This has been the cause of significant erosion control issues which the city needed to remedy, with extensive projects being completed at Tulsa's Fred Creek and also Joe Creek. South Fork Joe Creek handles a great deal of storm water runoff during storm events. 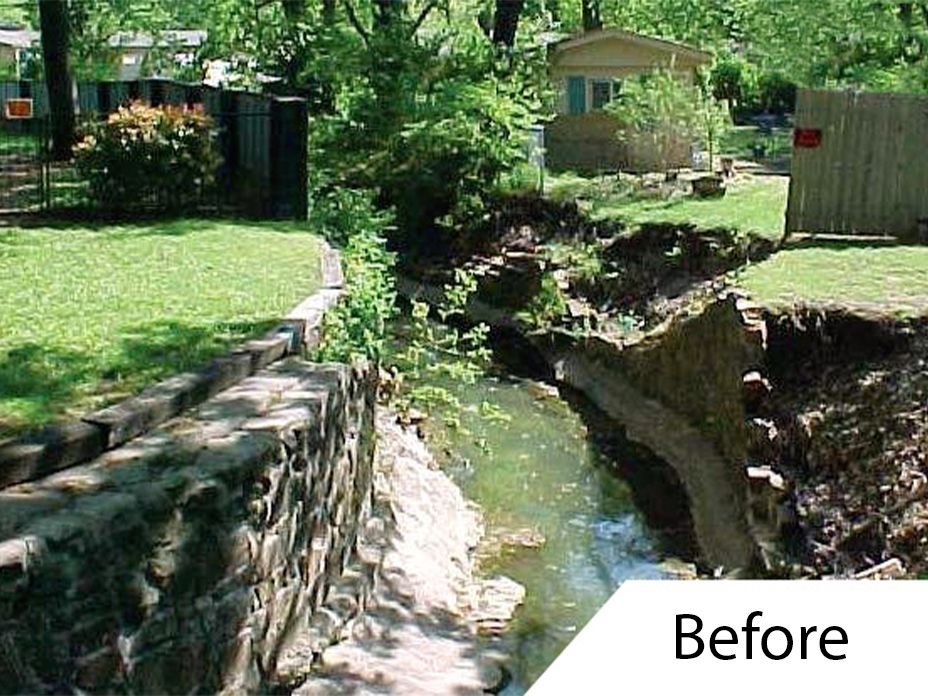 In other parts of the city, drainage channels like this had been lined with almost every solution imaginable - from naturally vegetated banks, to rip rap, to cast-in-place walls. However, when the city began a multi-year, multi-project initiative to handle its stormwater issues, they decided to use a unique alternative.

The city needed a solution that would provide structural support, but also look good. Because South Fork Joe Creek winds through a residential neighborhood, aesthetics were important. The City also wanted the contours of the renovated channel to follow the natural flow line of the creek.

"Versatility, setback, and the ability to build tall gravity walls were all strong selling points for Redi-Rock," Welzenbach said.

The Redi-Rock gravity retaining wall system consists of wet cast concrete blocks that weigh more than one ton each. These massive blocks interlock like a giant Lego block system, making installation fast and easy. Coupled with a Limestone texture that looks like natural stone, Redi-Rock was an ideal solution for Tulsa's stormwater channel stabilization needs. 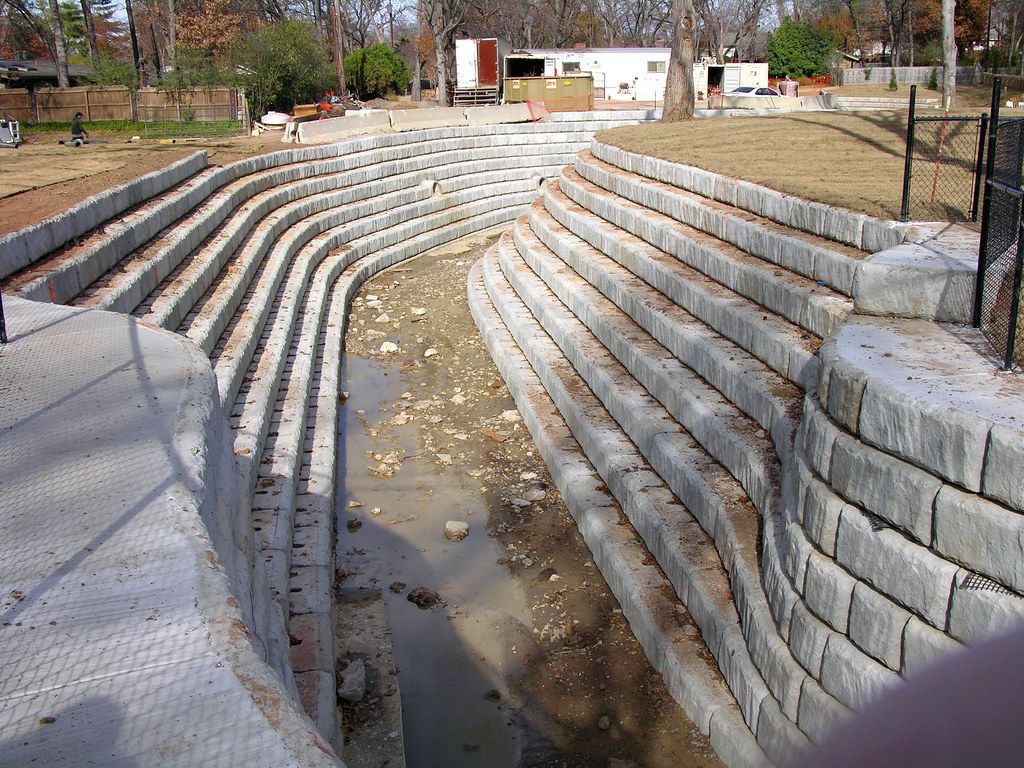 The curves of this Redi-Rock retaining wall help stabilize the banks of South Fork Joe Creek by naturally controlling the speed of the water.

The Redi-Rock system also has the ability to build serpentine curves using the standard retaining wall blocks. Inside and outside curves allow walls to follow the natural lay of the land and control the speed of the water, further preventing soil erosion.

To stabilize the creek banks on South Fork Joe Creek, the city's engineers specified approximately 46,000 square feet (4274 square meters) of Redi-Rock retaining walls. The gravity walls were designed to be 13 to 14.5 feet (4 to 4.5 meters) tall without reinforcement and were constructed on a concrete leveling pad.

Redi-Rock is a versatile system that allows designers to use multiple block types that all coordinate in the same wall. Two types of Redi-Rock blocks were specified for this project: Redi-Rock planter blocks and Redi-Rock 41in (1030mm) gravity blocks, both in Limestone texture.

Redi-Rock planter blocks create walls with a 16.25 inch (412.75 millimeter) setback per course which creates an approximately 43 degree batter angle when used in every course. At South Fork Joe Creek, engineers used planter blocks to create wider sections of the channel with more gradually sloping sides. In areas where space was more limited, they used Redi-Rock 41in (1030mm) blocks, which create a four degree batter. The four degree batter angle allowed these sections of wall to easily transition into standard box culverts and underground utility boxes.

The creek stabilization project was completed in the spring of 2010. 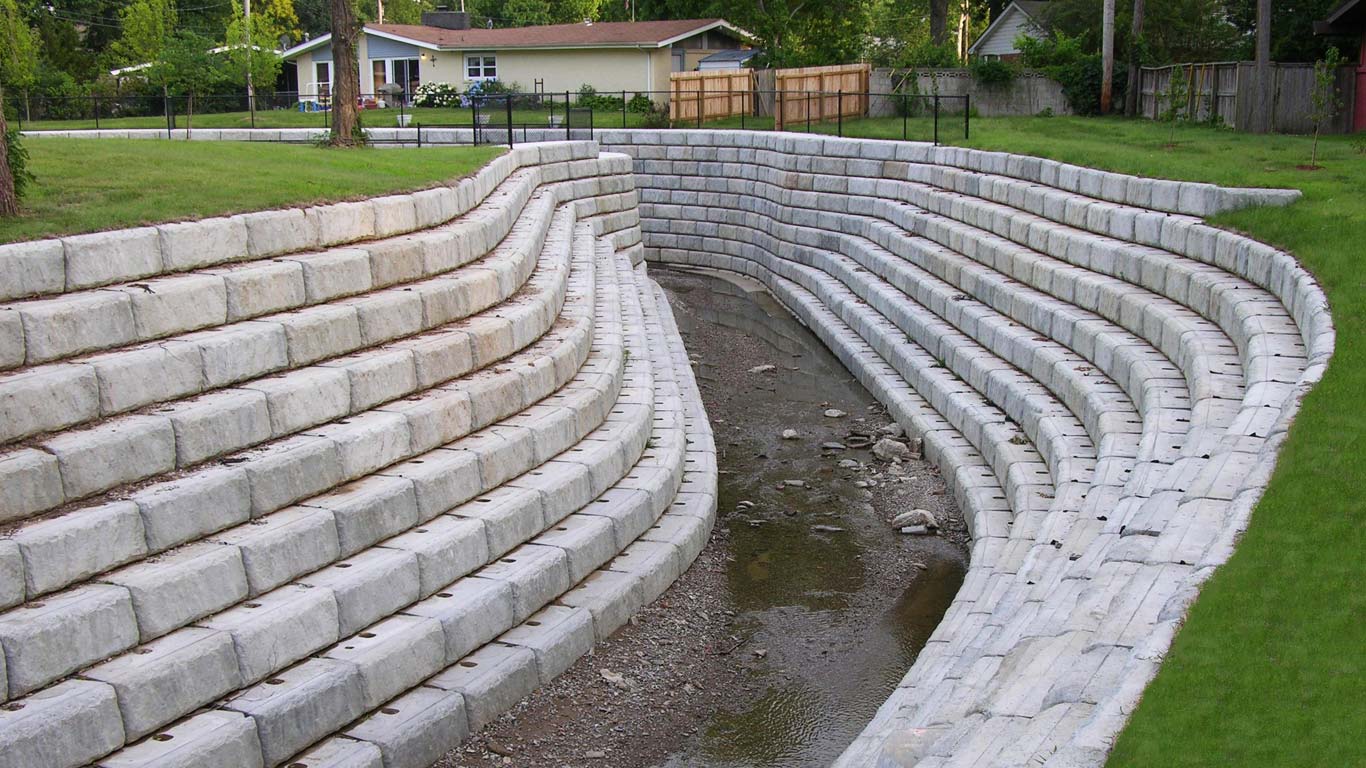 The Limestone texture of the retaining wall blocks gives an aesthetic look to the drainage improvement project.