In 2007, the Michigan Department of Natural Resources (DNR) decided to upgrade the Mackinac Island State Harbor for better functionality and appearance to accommodate the larger numbers of boaters and visitors.

To design and build the new facility, the DNR turned to United Design Associates and Ryba Marine Construction Company, both located in Cheboygan, Michigan.

When the DNR first began looking at options for renovations of the harbor area, they wanted to use natural stone. However, natural stone proved to be cost prohibitive and nearly impossible to install and complete the project within the tight time constraints. The Mackinac Island State Harbor facility was also required to meet all Americans with Disabilities Act (ADA) requirements, which made natural stone a poor option due to its irregularity in dimensions.

"The critical points at the sidewalks only had a 3/8 inch (9.5 millimeter) tolerance," said Tom Bajko, P.E. from Ryba Marine. "With the ADA requirements for slopes in the sidewalks, this was very important and would have been extremely time consuming to achieve with natural stone." 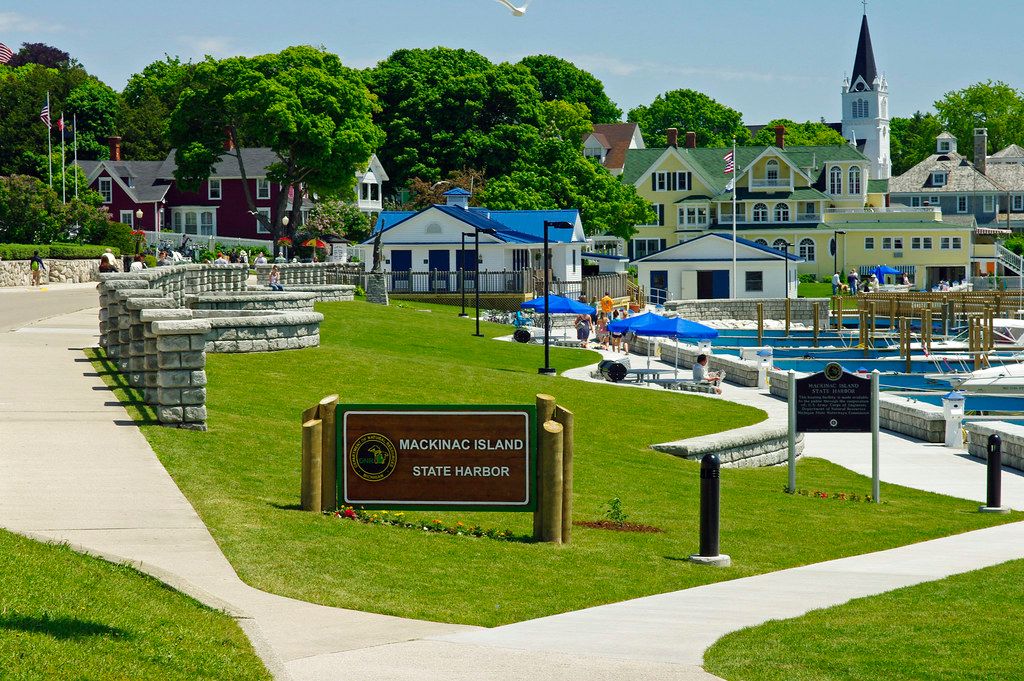 The design team concluded that Redi-Rock's consistent dimensions, aesthetic appeal, and ease of installation provided the best solution for the project's needs. Redi-Rock's freestanding blocks, columns, and caps were specified for the job to create a picnic area, seat walls, fences to separate green space from roadway, and to provide stable cleats for the moorings of the harbor.

The project provided some unique challenges for Ryba Marine's construction crew. First, the project's location on an island required transporting a significant amount of materials from the mainland. Second, construction could not begin until the harbor closed for the year in late September, leaving the majority of the project to be completed during the harsh winter months. Third, Ryba Marine had never installed Redi-Rock.

"The learning curve for installing Redi-Rock was minimal. The workers had to learn as they went and did not have the luxury of any spare time to learn," Bajko said. "This is a first time installation and it came out quite well."

The Redi-Rock blocks were manufactured in Charlevoix, Michigan, by MDC Contracting and transported about 60 miles (97 kilometers) to the ferry dock in St. Ignace, Michigan, where they were loaded onto a barge bound for Mackinac Island. The island's streets were not used to deliver the blocks and the machinery used to construct the project was located on barges to preserve the shore. 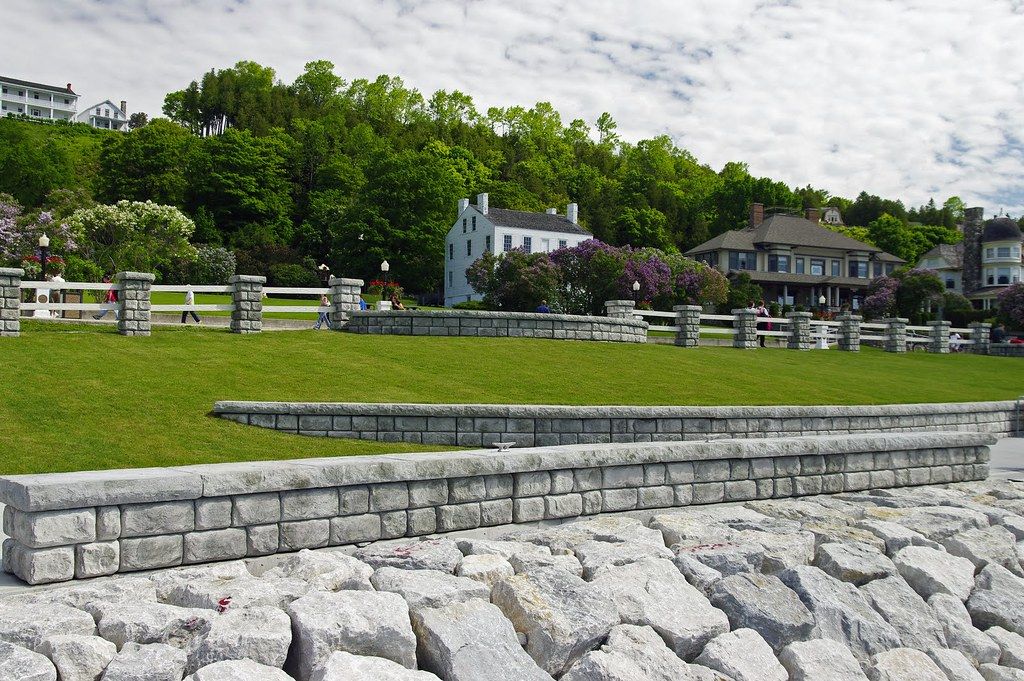 In total, 1,300 Redi-Rock blocks equaling 650 tons (590 metric tons) were unloaded on the shore and installed as the project progressed. MDC worked very closely with Ryba Marine to insure the proper blocks were delivered at the right time to keep the project on schedule.

"It was very important to have the shop drawings and block counts due to the logistics of the project," Bajko said.

Curved freestanding blocks created pedestrian overlooks facing the water, featuring four different radii, ranging from 16 feet to 56 feet (4.9 meters to 17.1 meters). Curved freestanding blocks are produced with special inserts that eliminate the need for cutting the blocks on the job site. The minimum radius is 14.5 feet (4.4 meters) when all curved Redi-Rock blocks are used. Variable radius curves are available with special inserts and trimming the block as needed. The designers included some creative touches in the project, including using Redi-Rock's freestanding blocks to make benches for visitors to rest and enjoy the view of the harbor.

The boat cleats at the end of the harbor's docks needed to be anchored to a stable structure, ensuring the boats safe haven amidst the sometimes harsh conditions of summer storms. To give the boats the strong anchor they needed, the designers of this project found a unique way to make the Redi-Rock freestanding garden blocks act as an anchor for each dock's cleats.

The garden blocks were attached to the concrete sidewalk using 1 inch (25.4 millimeter) threaded bar. Garden blocks have the same basic design as a regular freestanding block except the top of the garden block has a 7.5 inch (190.5 millimeter) trough. This trough is typically filled with soil and planted with flowers. However, in this application Ryba Marine filled the planter area with concrete. While the concrete was still wet, Ryba placed caps with re-rod on the bottom to secure their position. The boat cleats were then attached by drilling into the caps where bolts were epoxied in place. This creative combination completed a secure cleat for boat to moor in the harbor.

To encourage a better flow of pedestrian, bicycle, and horse and carriage traffic through the park, United Design Associates designed a series of fences integrating Redi-Rock columns connected by fence rails. These columns feature the same Cobblestone texture as the freestanding blocks, tying the entire project's look together. Redi-Rock caps top off each column. 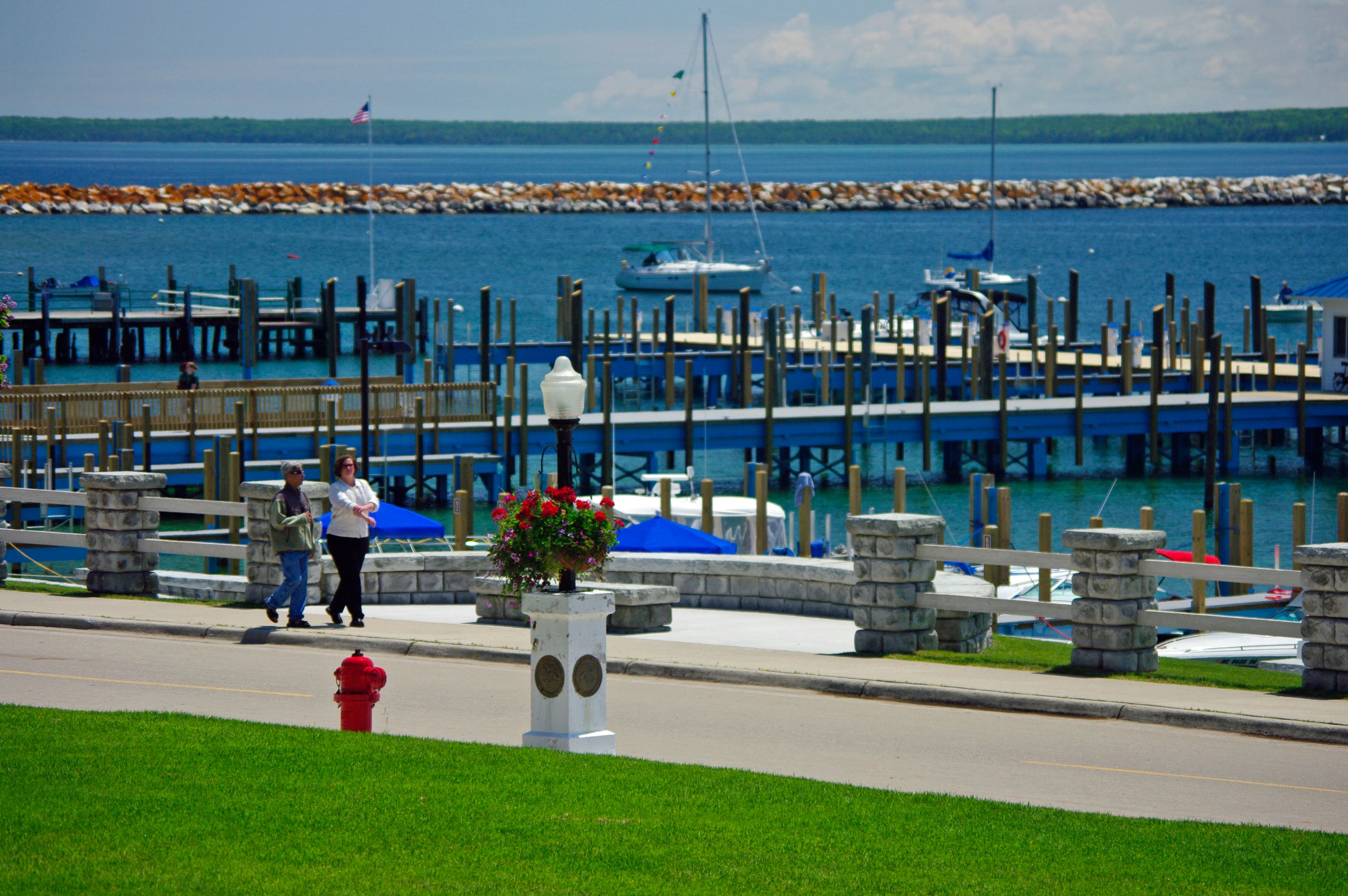 Redi-Rock columns integrated with fencing to help guide pedestrian traffic and keep traffic away from the marina.