Tucked amidst the Pyrenees Mountains on the border of France and Spain sits the little ski town of Pas de la Casa, Andorra. The town is reliant on tourist traffic year round to keep its economic engine running, so when a landslide closed RN 22 at the end of April, the community needed a solution to re-open the road fast.

The landslide had started on a Wednesday, worsened on a Friday, and by Saturday, April 27th at 9 p.m., the temporary measures to secure safe passage along the route were deemed unfit. The road was closed "indefinitely" to traffic just beyond the customs post in France.

As one of only two roads into the principality, RN 22 is traveled daily by 15,000 vehicles, so the stream of tourist traffic and deliveries would have to be re-routed. The detour to enter Andorra through Spain would take travelers 2-3 hours out of their way. 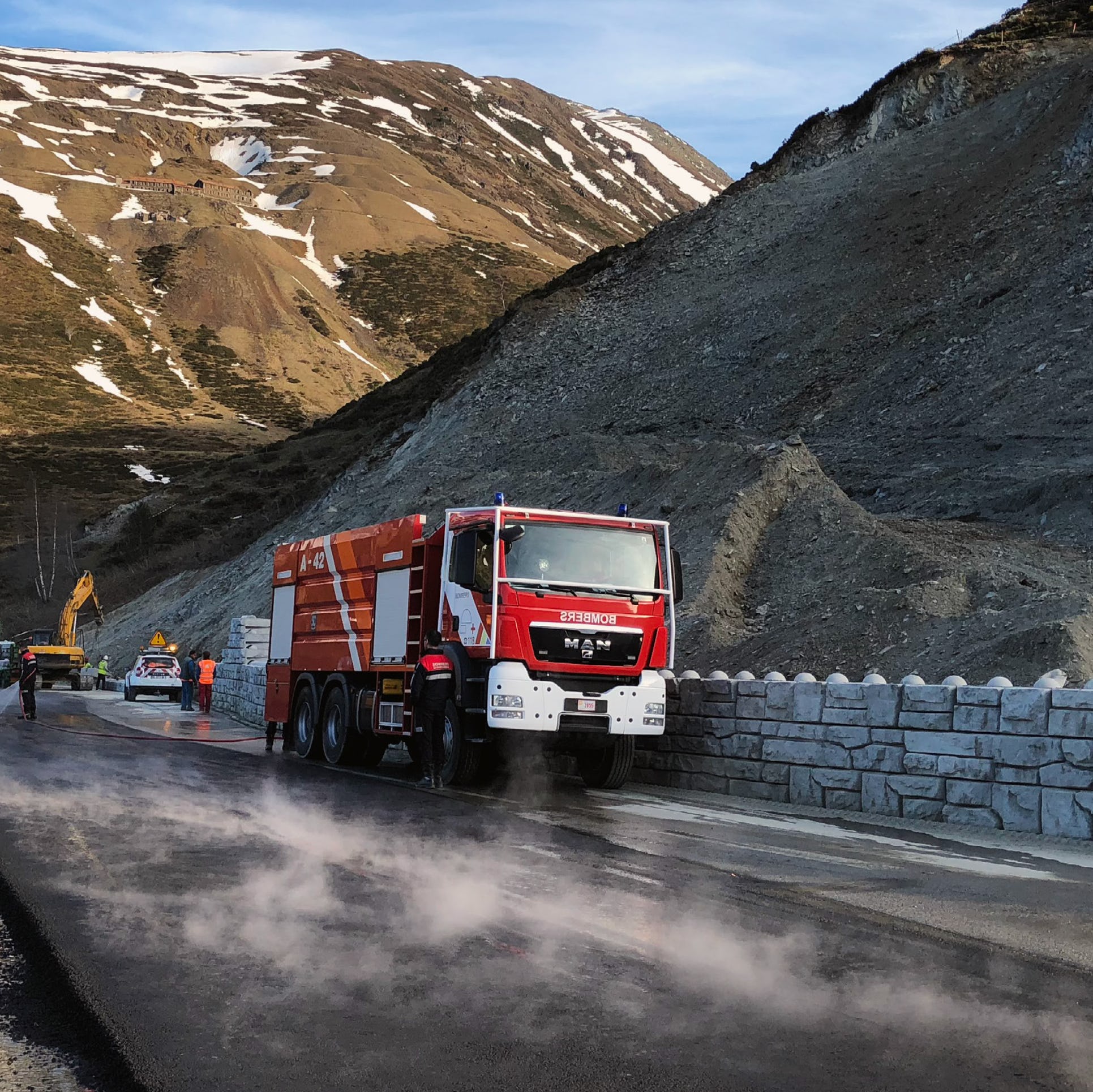 Three ML Rock producers -- AL Rock and BBLOX, as well as Carrieres et travaux de Navarre -- which are all located in southern France, worked together to supply the project.

With the town virtually cut off from the outside world and their local economy in jeopardy, the French Departments of Roads for the Southwest (DIRSO) brought in STAM, a company that specializes in difficult to access sites in high-altitude, mountain environments.

According to a press release on the project, upon receiving the call Jeans-Marie Tissot, director of STAM, said "I know why you call me!" The team of STAM specialists got to work mobilizing, and they deployed five shovel mechanics to work round the clock removing debris from the location at 5,905 feet (1,800 meters) with steep terrain. Once the land was stabilized and the debris removed, the next step would be installing a retaining wall to shore up the slope.

For that task, Tissot reached out to Jean-Michel Morello, owner of AL Rock/Gedimat Vialleix, a licensed Redi-Rock supplier that STAM had worked with previously. Morello got to work coordinating with the network of Redi-Rock suppliers in France. He reached out to Vincent Lachaux of BBLOX/Lachaux Betons. Lacheaux and Morello together obtained exclusive rights for manufacturing Redi-Rock in France in 2016, and since then they have been working together to grow the network to 12 producers under the name ML Rock.

Three ML Rock producers -- AL Rock and BBLOX, as well as Carrieres et travaux de Navarre -- which are all located in southern France, worked together to supply the project. Each manufacturer analyzed their existing inventory of 60in (1520mm) blocks in comparison to their forecasted sales in order to ensure they wouldn't jeopardize future projects while also supplying PMBs for the emergency repair.

In total, AL Rock supplied 200 blocks, BBLOX supplied 130 blocks and Carrieres et travaux de Navarre supplied 100 blocks. In addition to being able to supply the blocks on short notice, the quick installation process for Redi-Rock was a huge benefit in this emergency repair as well.

Lauchaux and Morello explained "[there's] no plaster, no joints, no paint, no finish," the blocks leave the factory with a beautiful natural stone appearance ready to be installed.

After the base course of the large precast modular blocks is set, a typical crew of two to three men and a piece of lifting machinery can set upwards of 700 square feet (65 square meters) a day. In the case of the wall along RN 22, STAM finished the entire project -- over 2,875 square feet (267 square meters) -- in just four days.

In total, 33 delivery trucks supplied the 760 tons (689,000 kilograms) of Redi-Rock PMBs to craft the wall. The 200 blocks from AL Rock, which is located in Bort-les-Orgues, France, would travel the farthest distance to the site -- 310 miles (500 kilometers). Manufacturers will typically ship Redi-Rock approximately 125 miles (200 kilometers). Despite being 2.5 times the standard shipping radius, the PMB solution with Redi-Rock was still a more cost-effective solution than the cast-in-place alternative. 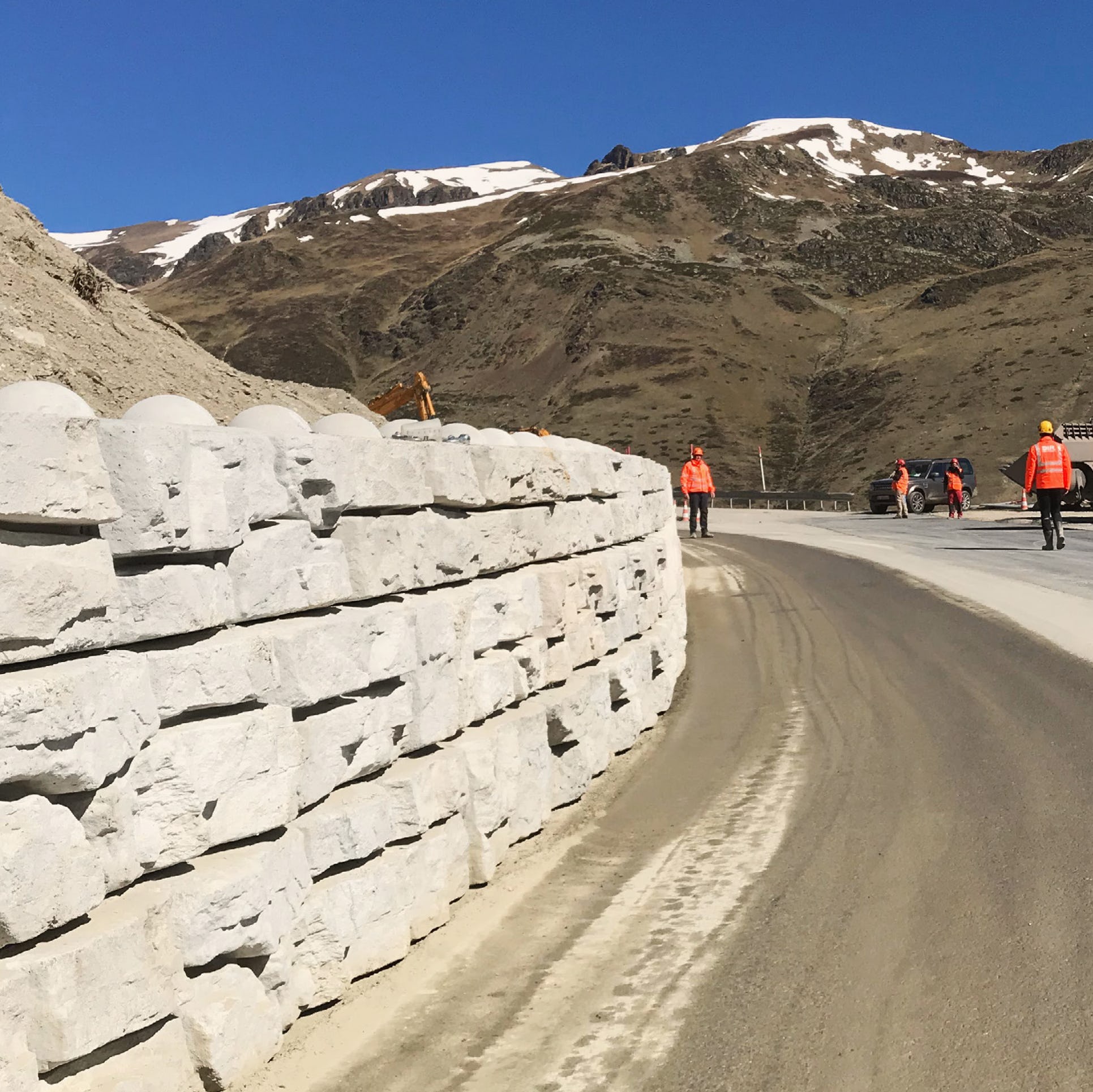 The Redi-Rock wall, which curves along the roadway and stretches 262 feet (80 meters) long and 10 feet (3 meters) tall, was finished a week ahead of the envisioned schedule for the project. RN 22 was closed for 18 days, but thanks to the technical ability of STAM and the availability and quick install of Redi-Rock, the road is now reopened and safe for traffic.