The concept for a nautical resort on par with Canadian skiing locales like Whistler and Tremblants was sparked over 20 years ago, and the marina at Big Bay Point on Lake Simcoe in Ontario was chosen for the destination. But, the existing, 10-acre (4-hectare) marina wouldn't support the grand vision the developers had in mind for Friday Harbour.

"The spark came from essentially having the idea of creating something of a boaters' destination on Lake Simcoe, which is something it was missing for a while," said Vimal Patel, project manager for Geranium, one of five partners responsible for founding and starting Friday Harbour.

"Any vessel that can navigate the Trent-Severn Waterway, which is the connection into Lake Simcoe, can be accommodated in the harbour here," he explained. The 1,000-slip marina is aimed at luring boating traffic from the 240-mile (386-kilometer) canal that stretches from Lake Ontario to Georgian Bay, but the developers' intent was to create an all-seasons resort with a nature preserve, golf course, beach club, shops, restaurants and bars, as well as 3,000 resort residential units.

"That's where the Redi-Rock product came in because in order to create the 4.5 kilometers (2.8 miles) of shoreline," explained Patel, "we had to have something that was aesthetically pleasing and also easy to install."

"All-in-all, I know that Friday Harbour's board of directors and their whole team looked at alternative options, and they found that Redi-Rock was the best fit and the best solution for this project," said Chase Clark, sales manager for The Sarjeant Co. Ltd.

Headquartered in Barrie about 12.5 miles (20 kilometers) from Friday Harbour, The Sarjeant Co. Ltd. is a construction and fuel supply company that manufactures Redi-Rock as part of their portfolio. Redi-Rock is a licensed, precast concrete retaining wall system made from wetcast concrete, so natural stone textures create the face of an engineered solution.

"Aesthetically we really loved the product and also the ease of installation. So much of the other products we were looking at involved the use of tiebacks and shoring and things like that in order to make it withstand the pressures of the earth behind it," said Patel.

With Redi-Rock, the majority of the retaining walls for the marina and man-made islands could be built as straight gravity walls, where the sheer weight of the massive concrete blocks connected with a patented knob and groove technology -- like giant Lego blocks -- could hold back the earth.

"This was about three to four years in the making as far as meeting with Geranium and going through the designs and options," said Clark. 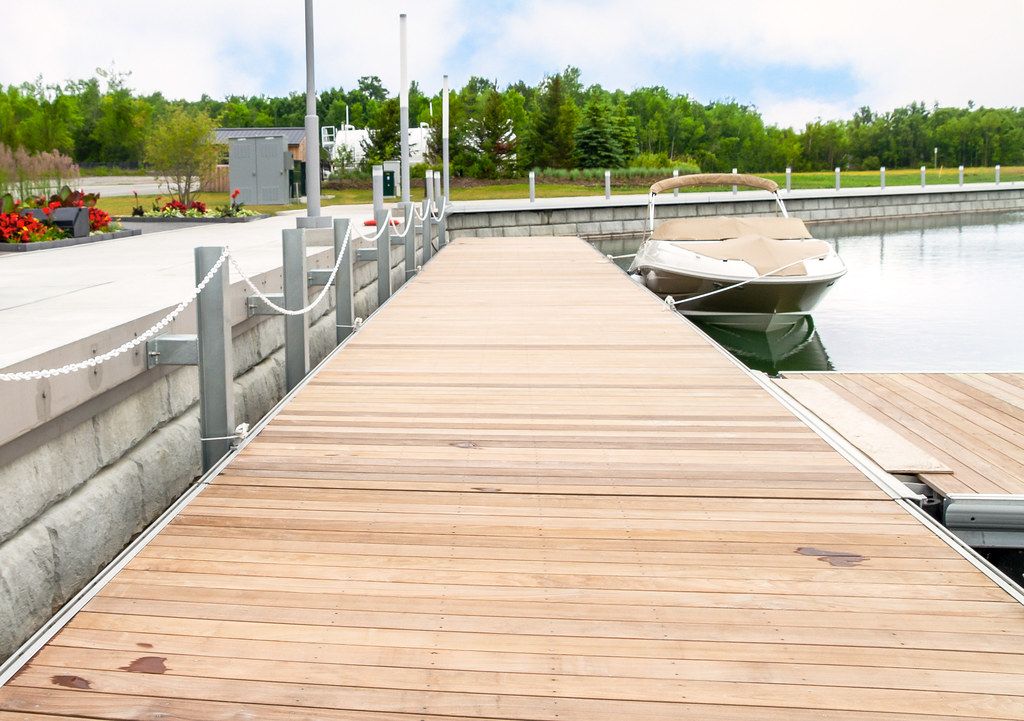 About two courses of Redi-Rock blocks show above the waterline at Friday Harbour, but 16 courses of block make up the total retaining wall.

While only about two courses of Redi-Rock blocks in the Limestone texture show above the waterline in the finished marina, the retaining walls themselves include 16 courses of Redi-Rock blocks, which means they stand 24 feet (7.3 meters) tall. In order to achieve those significant heights without using reinforcement, many of the blocks used on the project were in the 60in (1520mm) series, where each block weights 3,287 pounds (1,491 kilograms).

"When we started producing the Redi-Rock for this, originally we were around 30,000 blocks that were going to be required," said Clark. Then, as the project progressed and the developers liked the look of it so much, they used it in other locations to tie the aesthetics of the resort together. They used Redi-Rock along a roadway to transition between the environmental protection area and the marina village -- and even for an amphibian crossing at the golf course.

The total block count crept up to 38,000 blocks, and it was quite the undertaking for The Sarjeant Co. to amp up production in order to meet the demand within a tight time schedule. Most of the retaining walls they've supplied previously fell into the 200 to 400 block range.

"When it came time to manufacture the blocks, we were doing so at an incredible pace. We had over 75 forms in production, we were moving over 200 cubic meters of concrete a day in order to keep up," said Clark. On those 75 forms, 17 laborers were split into two crews, and they were pouring four times a day, which also required modifying their concrete mix design.

"We had to introduce a high-early cement in order give us set times that were adequate enough for us to pull those blocks and do such quick flips," said Clark. Once the blocks were pulled from the forms, four flatbed trailers ran daily to transport the blocks to the building location, where they were staged for installation.

Prior to installing the retaining walls, the water and fish in the existing marina needed to be removed. A cofferdam was set up at the mouth of Lake Simcoe, and an environmental consultant used ever-increasing electric shocks to stun the fish, bringing first the little and then the bigger fish up to the surface of the water where they could be easily caught and released back into Lake Simcoe. Once all the fish were caught, they pumped the water out of the basin at which point the multi-year excavation process commenced. 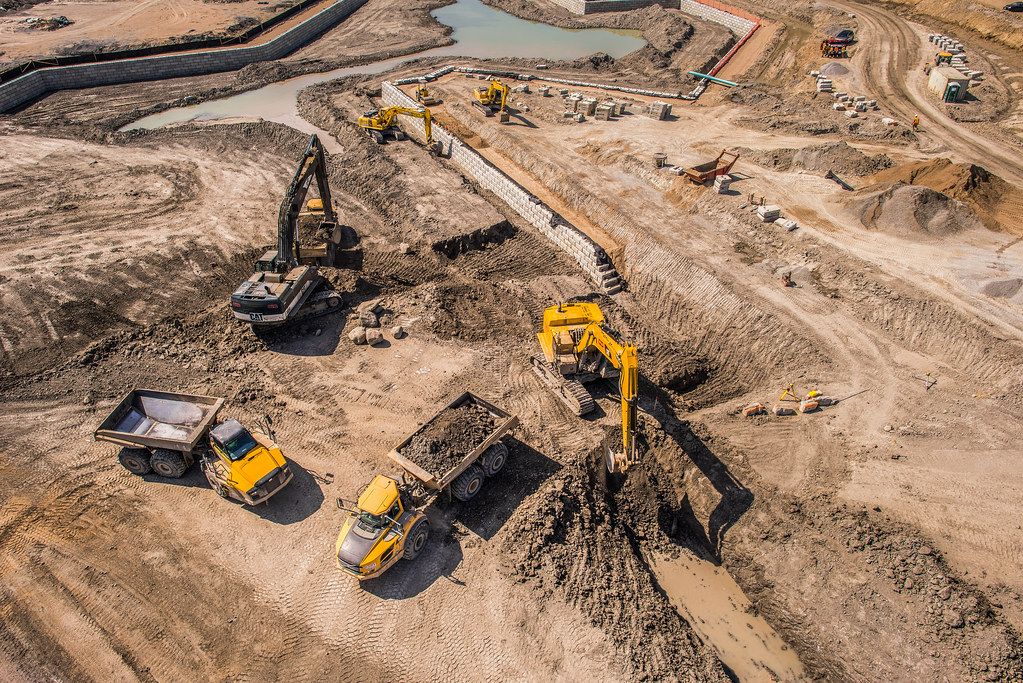 Installation of the Redi-Rock walls at Friday Harbour resort in Innisfil, Ontario, Canada occurred alongside the earthworks program.

The earthworks program entailed removing 2.4 million cubic yards (1.8 million cubic meters) of material from the future marina basin to be used in shaping the golf course. Once the excavation process was far enough along that the installation crews could access where the retaining walls would be built, construction of the 2.8 miles (4.5 kilometers) of retaining walls began.

"The first day we got there, the large size of the block was kind of an eye opener for our company. We usually deal with smaller size blocks, " said Domenic Dilallo, site supervisor for Rocky River Construction, one of three installers for the project.

"Within days, the crew got on to the style and the installation process for it, and from there we just progressed along and brought up productivity as the days went on," he said. The Rocky River crew would spend half their day on excavation, and the other half of the day installing product.

"The nature of the soil was shale, so the production in the morning for excavation wasn't really there," said Dilallo. "We had a 45-ton excavator digging our trenches, which is not usually normal for retaining walls."

With three separate entities installing the network of walls for the marina and islands, Geranium instituted what it called it's "Zero Tolerance Policy." In typical construction, there's always some tolerance, so being off by a millimeter is usually acceptable.

"Not in this case," said Patel. "If you were off by a millimeter or centimeter and that was exaggerated over 4.5 kilometers [2.8 miles], by the time you meet you're probably meters off and the wall's not going to meet."

Under the strict Zero Tolerance Policy, SCS Consulting Group was brought in to manage the installation of the Redi-Rock wall and field checks amidst the ongoing earthworks and excavation. As part of their construction administration, they coordinated the geotechnical testing and legal surveying, as well as facilitated water removal on site when necessary.

"The site looked like a bomb went off...it was kind of hard to figure out exactly where you were in the lay of the land verses where you were on the drawings. So, the only thing that was saving us was that layout," said Dylan Weisener from SCS Consulting Group. "The way that we had everything structured and laid out ahead of the wall construction continuously was really I think what kept the crews on track and made sure that we knew we were in the right location."

The typical, day-to-day process SCS oversaw in regard to the "Zero Tolerance Policy" included:

"Part of the reason that the accuracy of the wall was so critical was that it actually formed part of the lot lines, so it actually dictated how big the lots on the site were going to be for the townhomes, as well as for the other structures that would be going in," said Weisener. Another aspect of the design was that Redi-Rock would form islands and waterways throughout the resort, so there had to be room for two boats to pass with the docks extending from the retaining walls.

"Redi-Rock has a form line about 10 to 11 centimeters away from the face of the wall [depending on the variance in texture], so using that form line on the top of the block was our guideline to follow to keep the wall straight. That's pretty much it. It follows the same kind of guidelines as any other retaining wall system," said Dilallo.

One hurdle to overcome with this project -- where do you put 38,000 blocks? Because blocks needed to be handled multiple times due to limited staging space, some inevitably were chipped in the juggling process. To eliminate any visual imperfections from their end result, Friday Harbour hired engineers to inspect the blocks. They tagged those that were perfect to be used for the visible courses of the retaining walls, and the rest would be used below the waterline.

Installation of the Redi-Rock walls to form the marina at Friday Harbour took about year and a half. Once the walls were finished, one more meticulous step was taken to reintroduce water into the new marina basin.

"Our designers designed a syphon system that was constructed to bring the water back into the marina...at a very gradual, slow pace," said Weisener. Eight syphons were used along the cofferdam to slowly fill up the new marina.

Originally leery about taking on the installation of a project of such a massive scale, Dilallo said, "It ended up being probably one of the most interesting and most rewarding projects that our young crew has ever done. Every time we come here we look back and just realize wow, we've completed this fairly large project."

That "fairly-large" project is actually the largest Redi-Rock project to date at 38,000 blocks. As the wall is complete, the much-anticipated first phase of the development at Friday Harbour resort is open to the public. While construction will continue on additional residential and commercial spaces, the initial impressions match up to the developers' grand intentions. 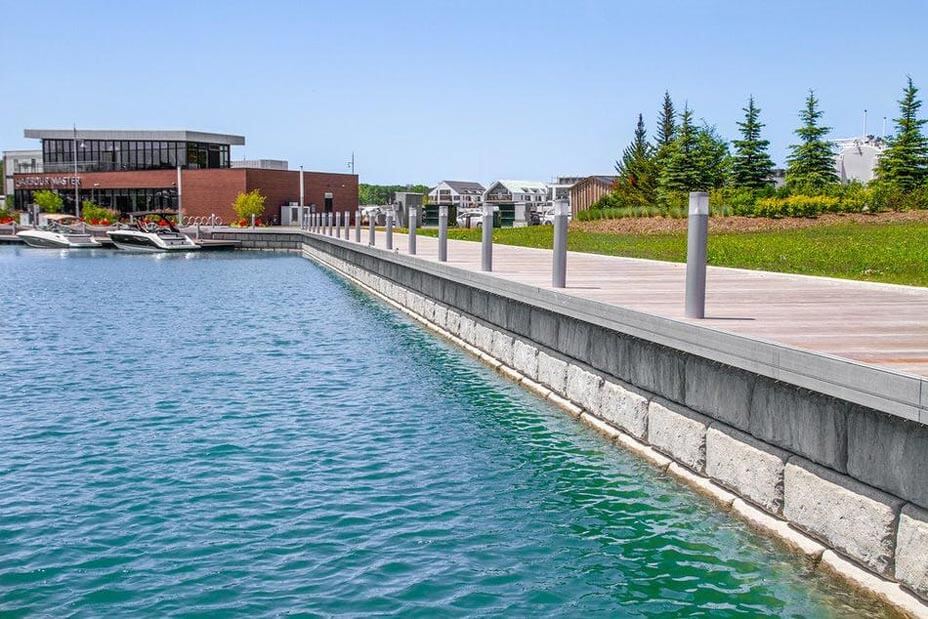 The aesthetics of Redi-Rock's limestone texture fit the overall impression the developers of Friday Harbour were after.

"Friday Harbour itself is a destination spot like no other," said Clark. "This is a very high-end resort, high-end community, and they wanted something that was going to look great and obviously withstand our harsh environments in the north."

"It looks beautiful," said Patel. "Redi-Rock was a huge part in success of the marina which is pretty much the focal point of the project."

Gravity Blocks - Massive, one-ton Redi-Rock gravity blocks rely on the sheer mass of each block to hold back the earth.