In a planned community like Emerald Hills, storm water management not only has to function well-it has to look good too. So when engineers and architects were challenged with creating an aesthetic solution for a roadway that dissected two retention ponds at one corner of the development, they had to get creative.

Emerald Hills is a mixed use residential and commercial community located on a high visibility stretch of the Yellowhead Highway, a main artery through the Edmonton, Alberta area. Since this corner of the development is visible from the highway, creating an aesthetic finish for the roadway and retention ponds was crucial.

"For this project, scheduling was essential and we needed to install all the underground infrastructure in 2010, then put the road on, then put the walls in afterwards (in 2011). For walls the height we needed, most wall systems would have required tiebacks which would have disturbed the utilities," explained Alex Swonek, P.E. with Select Engineering Consultants. 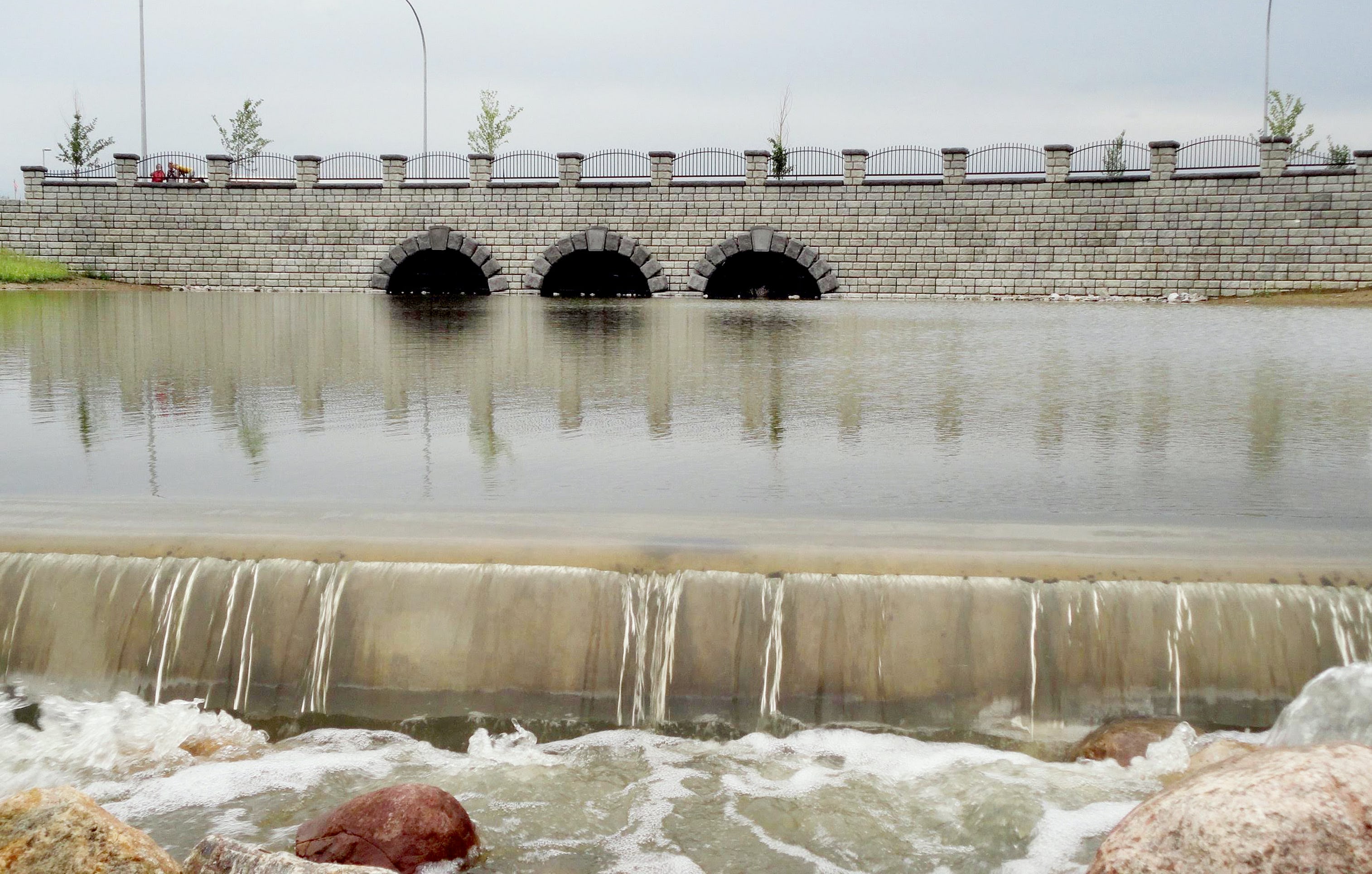 This Redi-Rock Cobblestone gravity wall was designed to give the appearance that water actually flowed through the arches at the base of the walls.

"Construction timing led us to choose Redi-Rock. Because it didn't require tiebacks, we were able to install the blocks after everything else went in and solve our construction timing issue," Swonek explained.

The massive size of each Redi-Rock 41in (1030mm) block allows tall gravity walls to be built without geogrid or tiebacks. Gravity construction allows walls to be built without disturbing utilities and infrastructure in many applications-making it a great fit for projects in confined spaces like this one. Even though this project required a 13.5 foot (4.1 meter) tall wall on both sides of the roadway, Redi-Rock could handle the job no problem.

At first glance, it's easy to assume that water flows through the arches at the base of the walls-and that's exactly what the designers want you to think. "They wanted to give it the effect that this was a bridge so that it gave a little more realistic appearance versus just a stone wall," explained Brad Giesbrecht, landscape architect with Browning Horrocks Design Inc. The water actually flows though a culvert underneath the entire roadway structure and a few feet below the base of the retaining walls. The culvert regulates the water level of both retention ponds.

"Giving the appearance that the water flows beneath this bridge-like structure was more visually appealing than plain retaining walls," Swonek agreed. "No water flows through the arches, though."

On top of the gravity walls, short parapet walls topped with Redi-Rock cap blocks were incorporated. In addition, Redi-Rock column blocks were integrated with wrought iron fencing to create an aesthetic finish and to act as a guard rail for pedestrian traffic as well.

Other design decisions included choosing a texture. Swonek said: "We chose the Cobblestone texture, which gave us a good look that went with the neighborhood."

Giesbrecht added: "We ultimately came to the decision to do the natural gray color because it's more of a timeless look." The arch block pieces and the cap blocks were a darker gray color, giving the entire project a two tone look. 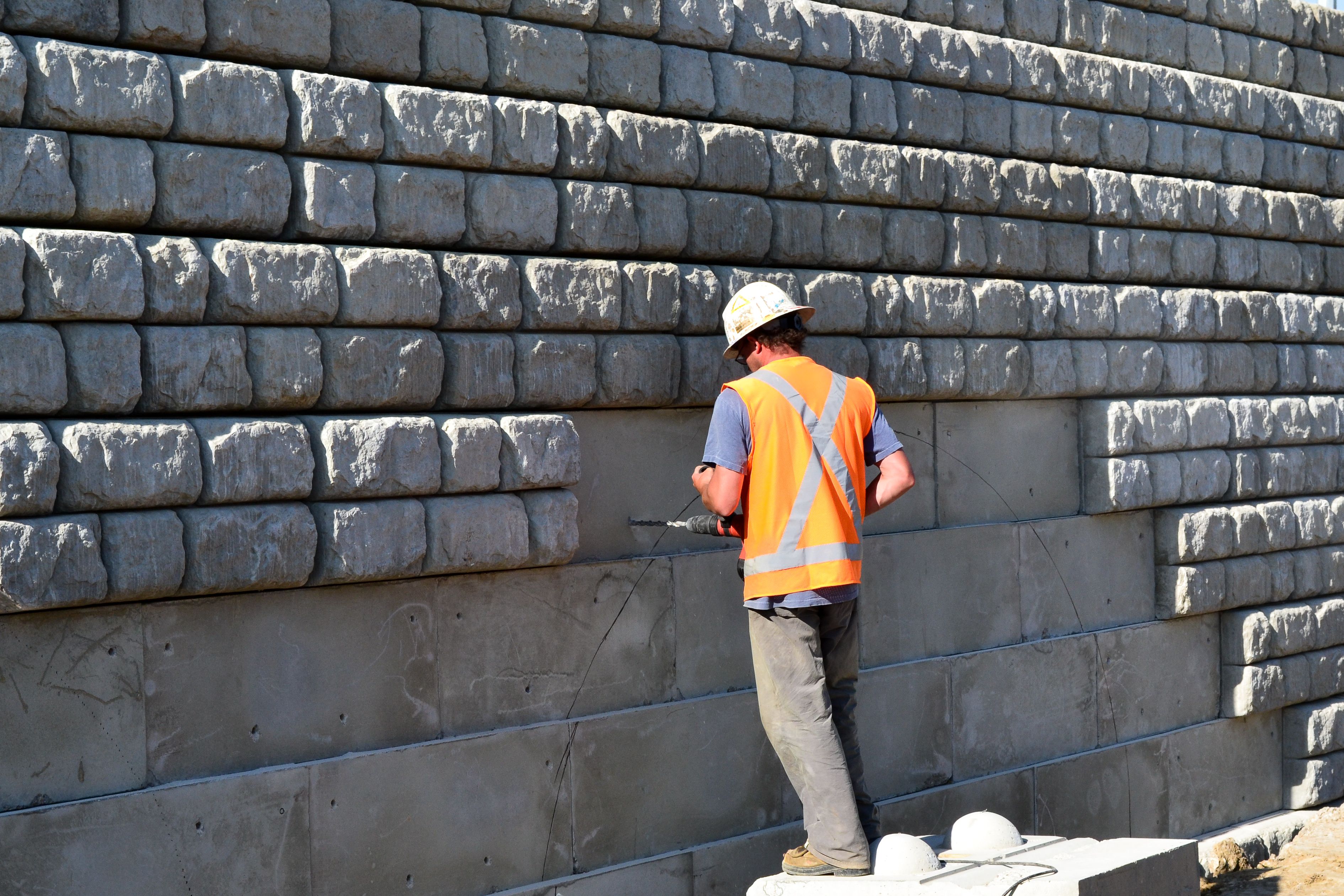 The customer worked with their local Redi-Rock manufacturer to make custom blocks used for the unique arch design on this project's headwalls.

Jim Kapteyn of Rockwater Landscapes Limited led the installation of the project. "We've installed a number of large projects in the Edmonton area, and I like that I can use a very small crew to do a very large project. The sheer volume of the block itself allows us to build walls without reinforcement which allows us to be more efficient," Kapteyn explained.

Swonek added, "It's easy to use and installs way quicker than any other retaining wall system can go in. The tiebacks and the amount of excavation is way less, and it's a lot more stable against any sort of water body when you have ice forming against it," Swonek said. Armor stone was also specified at the base of the walls to protect the base blocks from ice damage.

"It took us about 20 days to get the walls up, then it took another 20 days to do all the detail work," explained Kapteyn. From start to finish, the project took a total of 6 weeks to install.

The major component of the detail work Kapteyn mentioned was installing the archways. To allow for the construction of the archways, "we worked very closely with Westcon Precast (the local Redi-Rock manufacturer) to create custom blocks with a smooth finish that made the arch design possible without sacrificing the structural integrity which allowed us to achieve the look that we did," Giesbrecht said.

The advantage of using a precast system for this project was that the designers were able to create a structure that used both Cobblestone texture blocks and custom smooth-textured Redi-Rock blocks that didn't require cutting on site - resulting in a cleaner look and faster installation time. These smooth blocks were later stained black to give the appearance of open culverts from a distance.

To create the keystone pieces for the archway, Westcon Precast custom poured the 4-5 inch (102-127 millimeter) thick keystone pieces with a similar shape and texture of the Cobblestone blocks. The crew from Rockwater Landscapes then drilled and placed rebar into the Redi-Rock retaining wall blocks and used heavy duty concrete epoxy to attach the keystone pieces to the blocks, using a void in the back of the keystone pieces as an anchor for the rebar.

The finished result is a seamless transition between the Cobblestone texture blocks and the smooth-textured blocks, and a believable illusion of an open culvert. Throughout the year, the water level will fluctuate and often be higher than the base of the arches, adding to the illusion that water flows through the archways.

In total, the project required 3,700 square feet (343.7 square meters) of Redi-Rock. The identical walls on either side of the roadway stand 13.5 feet (4.1 meters) tall at the highest point, plus an additional 4.5 feet (1.4 meters) make up the parapet walls and the column blocks. What you see in these photos is Phase 1 of the development, and several more phases are in the works. "It's a superior product and we're going to be using it throughout the neighborhood," Swonek said.

"Based on cost and efficiency of installation and overall aesthetics, I think the client was quite pleased. We're all quite happy with the way it turned out," Giesbrecht said. 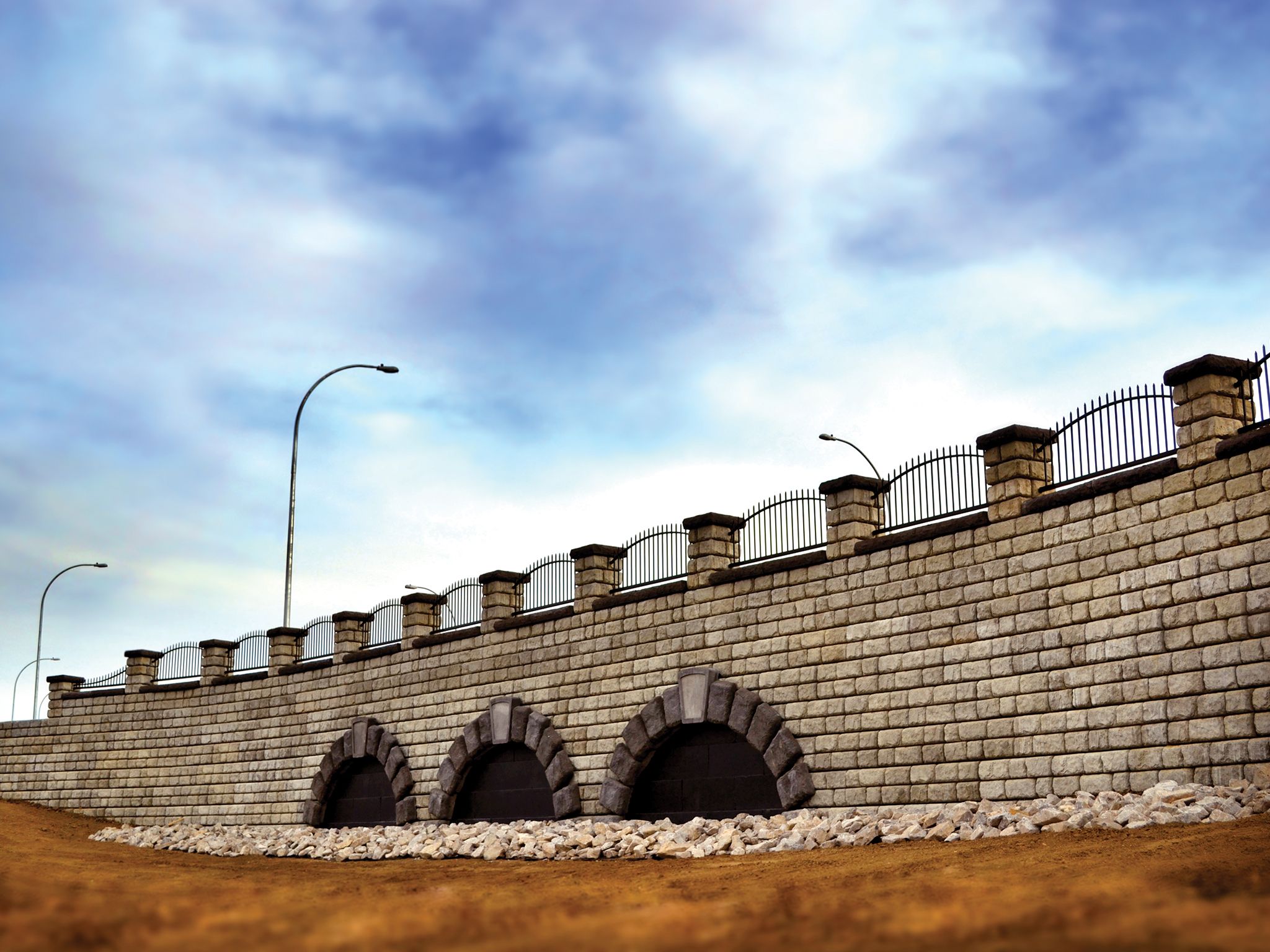 The project used 3,700 square feet (343.7 square meters) of Redi-Rock that included gravity blocks, columns, and caps in the Cobblestone texture.