When the natural banks of Fred Creek began eroding, the city of Tulsa needed to act. Fred Creek is a storm water runoff channel near the campus of Oral Roberts University (ORU) in downtown Tulsa. The erosion was threatening the stability of the banks and associated utilities, and the city needed to stabilize the stream banks while providing an attractive green area for jogging trails and parks.

Inadequacies with the Fred Creek drainage had caused flooding problems on the 263 acre ORU campus for years. With water flowing up to two feet (0.6 meters) over the top of the flood channel during high water, the channel was no longer adequate to handle the 100 year flood level waters. 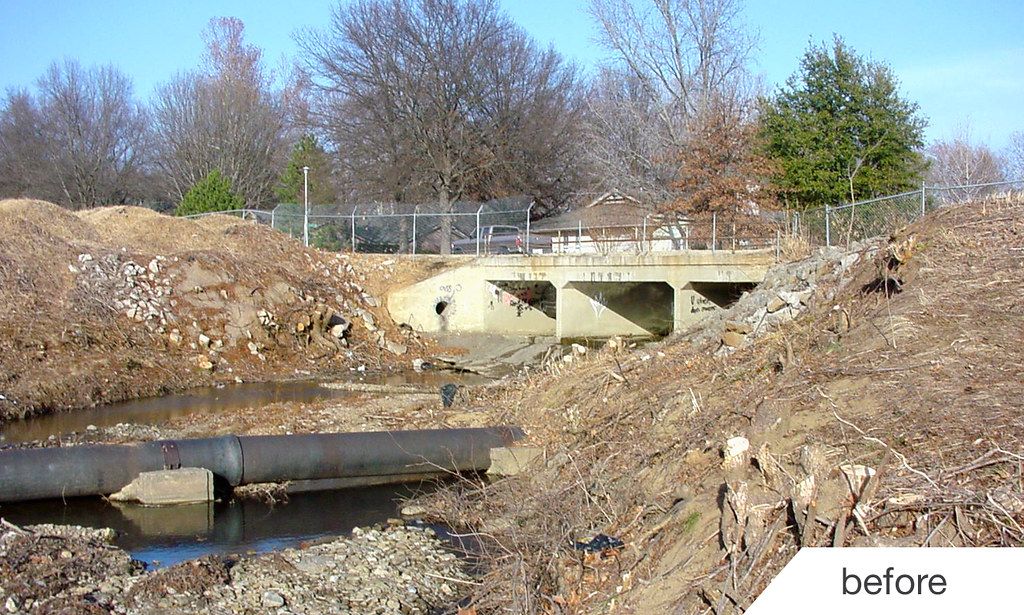 Before construction, erosion was threatening infrastructure and utilities.

The City of Tulsa wanted the contours of the renovated channel to follow the natural slope of the existing channel. The goal was to widen the banks of Fred Creek while following the existing channel as closely as possible in an effort to maintain a more natural look as well as providing a more hospitable environment for wildlife and plants, and a safer escape route in the event that a person might fall in.

"We have found in the past on similar projects that the smaller retaining wall blocks just won't handle the velocity of the water," said Bill Robinson P.E., project manager and then-Senior Engineer in Stormwater Design for the city of Tulsa. "This is one of five projects that are either been done or are under construction in Tulsa right now using Redi-Rock or equal products." 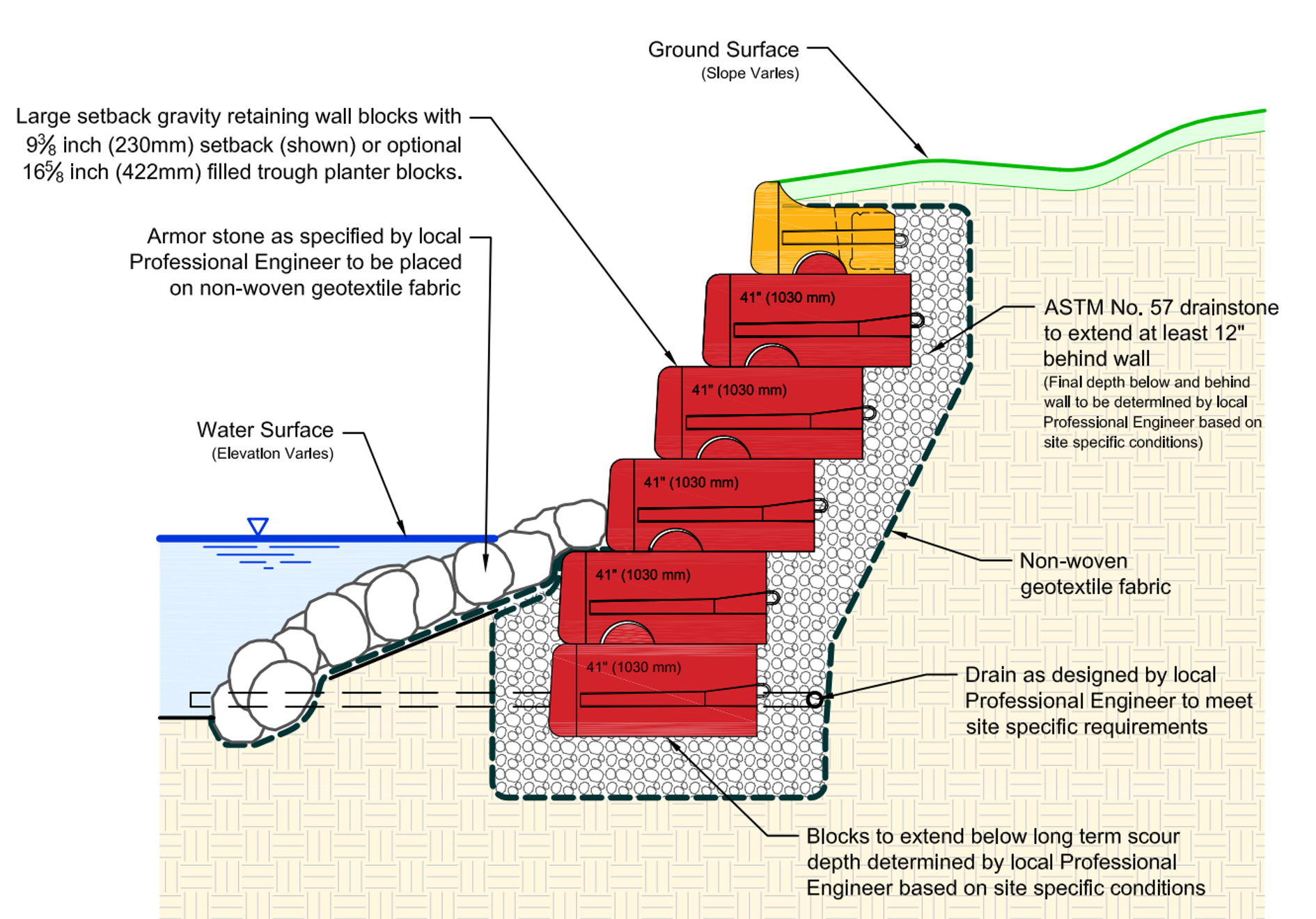 The first phase of the US Army Corps of Engineers-approved project to improve the Fred Creek Drainage included 9in (230mm) setback Redi-Rock retaining walls standing 18-19 feet (5.5-5.8 meters) at the tallest point and encompassing a total 68,000 square feet (6317 square meters).

Redi-Rock is a precast segmental retaining wall system which is known for building tall gravity walls, and even taller reinforced/MSE walls. These massive blocks weigh about one ton each and stack up like giant Lego blocks using an excavator. Blocks for this project were manufactured by local Redi-Rock retailer SI Precast.

The project contained both gravity and reinforced walls that were placed atop a concrete footing and were buried five feet (1.5 meters) on average.

The walls were Limestone texture, with 15 percent of the face area composed of half-blocks to "break up" the look of the walls.

Robinson, the project manager for the Fred Creek project, has since been promoted to Lead Engineer for Stormwater Planning for the City of Tulsa. He says the city will continue working with large block retaining walls for their erosion control needs throughout the city. 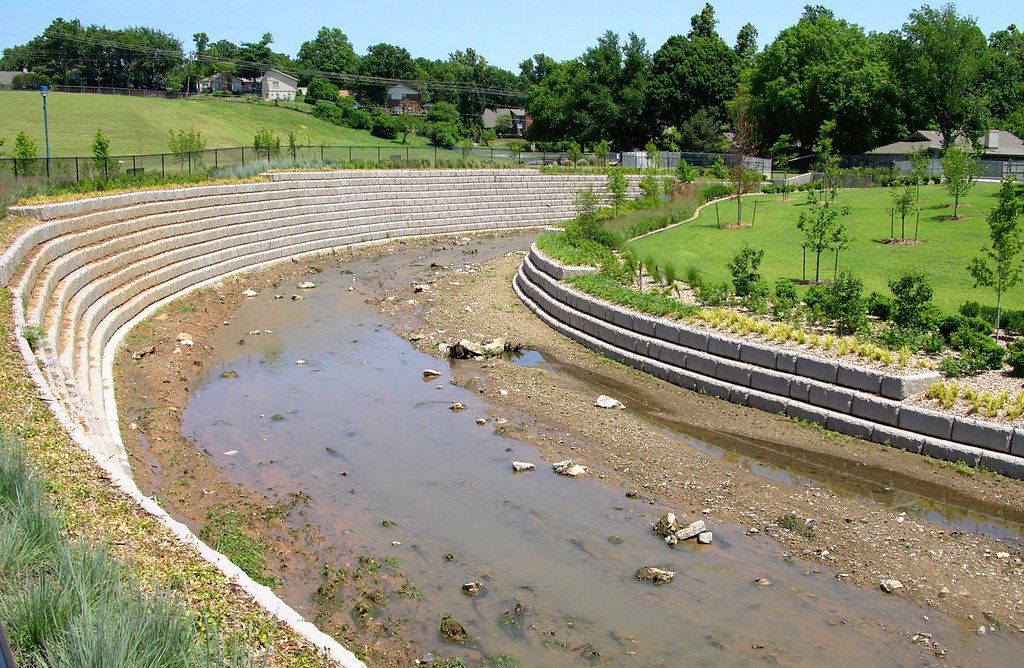 This project contributed to SI Precast's honoring in the 2008 Redi-Rock International Rocky Awards for Water Application Wall of the Year. SI Precast was chosen for the award based on several water application projects the company completed throughout the south central United States in 2008, including walls on Joe Creek in Tulsa and at the South Fork Pump Station in Texas.