When the banks of Two Mile Creek began to erode, the Town of Tonawanda, New York needed an aesthetic soil erosion solution, and they needed it on a tight schedule. 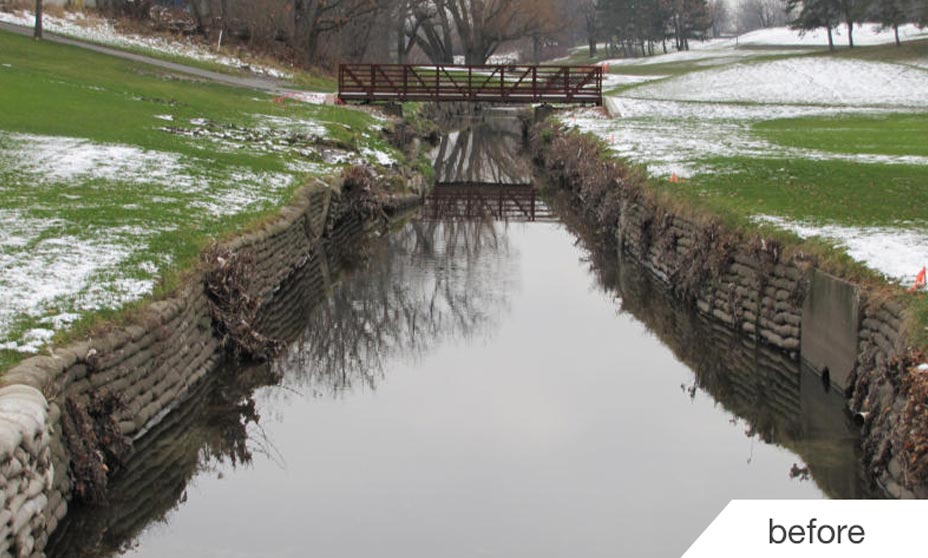 Concrete-filled sand bags were put in place in the 1940's to hold back the earth on these creek banks.

To create an aesthetic solution while also preventing further soil erosion of the creek banks, the town turned to local Redi-Rock manufacturer Kistner Concrete Products, Inc. Several years earlier, the first phase of this project was completed. The results were so successful that when it was time to design the second phase, Redi-Rock was the obvious choice.

Redi-Rock is an engineered precast retaining wall system that uses massive, one-ton blocks that stack up like giant Lego blocks. The blocks are composed of wet-cast concrete, which is engineered to perform well in water applications and withstand freeze-thaw cycles. Because the blocks are so massive, the Redi-Rock system can rely on gravity to hold the wall up. Gravity walls require less excavation, minimizing disturbances to nearby homes and infrastructure, as well as saving existing vegetation.

Designing the waterway to meet the 100 year flood levels was a significant factor of this project's design. The majority of the project was designed using Redi-Rock 41in (1033mm) concrete blocks, but engineers designed several sections of the channel using Redi-Rock's 9in (230mm) setback blocks to give the channel walls more gradual slopes. These 9in (230mm) setback sections terraced back from the rest of the walls to create a secondary flood plain.

The town wanted to keep the existing bridges and abutments in place so the project design called for using Redi-Rock's standard batter blocks to taper the channel along the inside of the abutments. To keep the volume of the channel consistent, the channel's depth in these areas was increased.

The project was on a very tight schedule. To minimize disruption to the golf course's landscape and usage, the town scheduled this project to be installed in the middle of winter, starting in January 2010. The goal was to have the golf course open in April of that year, leaving only a short window for construction. 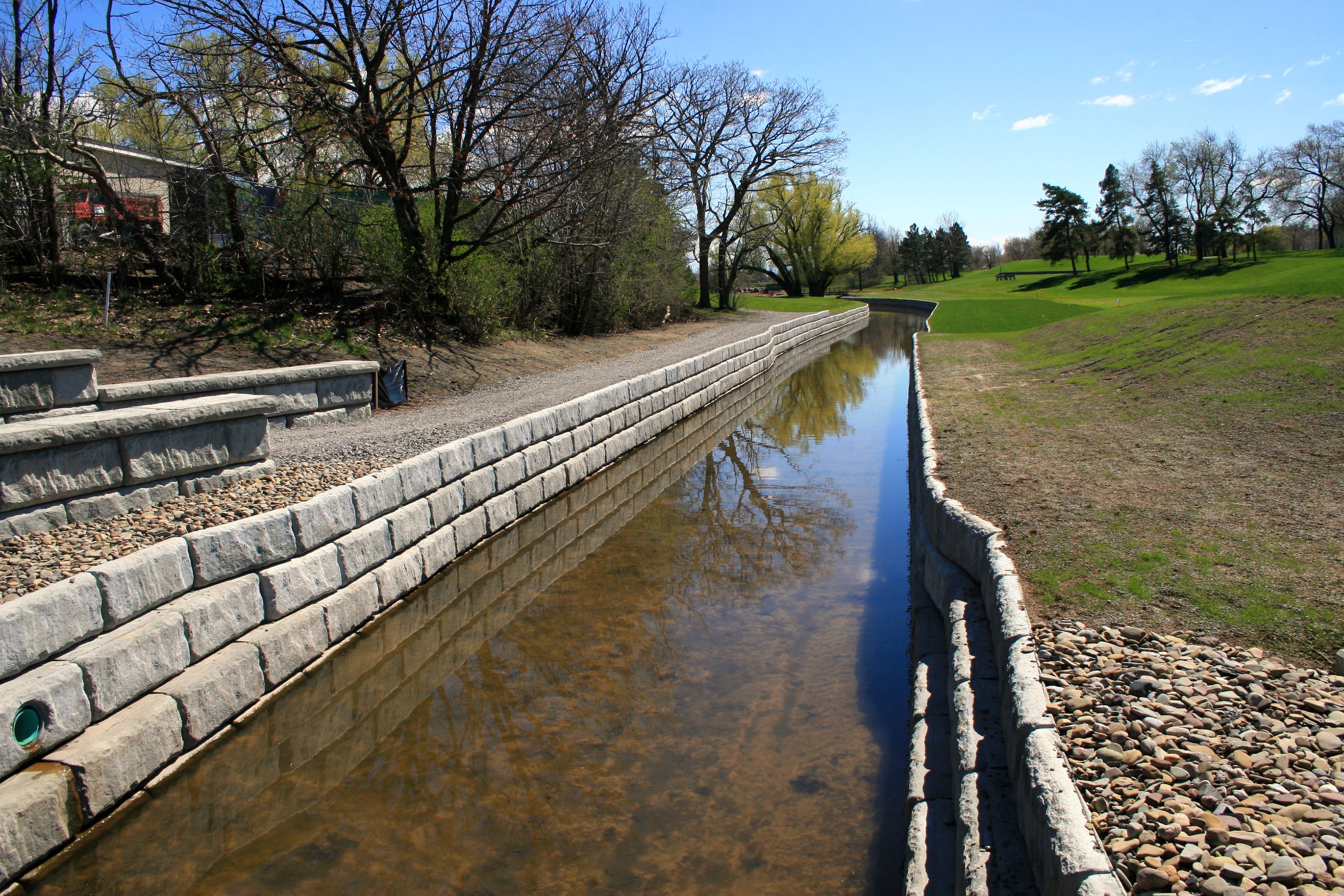 Redi-Rock gravity blocks were used to replace the failing sandbags and protect the channel from erosion.

Local Redi-Rock manufacturer Kistner Concrete had Redi-Rock inventory on hand, and was able to keep up with the construction schedule by double casting blocks each day. The channel walls were built as gravity structures, which minimized excavation and installation and helped the project meet its deadline. The entire project was installed in just 60 days.

Once the ground was frozen, the crews were able to bring in trucks loaded with blocks without tearing up the landscaping. The stream flow was minimal at the time of construction, but the channel was coffer damned to allow the Redi-Rock walls to be installed. The crew created a crushed stone leveling pad before placing the first row of Redi-Rock 60in (1520mm) Base Blocks to prevent overturning of the walls.

To address the drainage issue the existing wall had, the crew installed underdrains throughout the walls. "The biggest benefit of using Redi-Rock on this project was the ability to have proper drainage behind the walls," Milewski said.

"The town was really pleased with how the project turned out. When I went to snap pictures of the job, a golfer stopped me and said-completely unsolicited-'This looks awesome! Nice job,'" Mike Kistner said.

When the golf course opened that April, the response was overwhelmingly positive. Redi-Rock's ability to build sweeping inside and outside curves created natural-looking meanders, and the Redi-Rock cap blocks in the Limestone texture gave the project a finished aesthetic.

The project was awarded "Water Application of the Year" in the 2010 Redi-Rock International Rocky Awards. 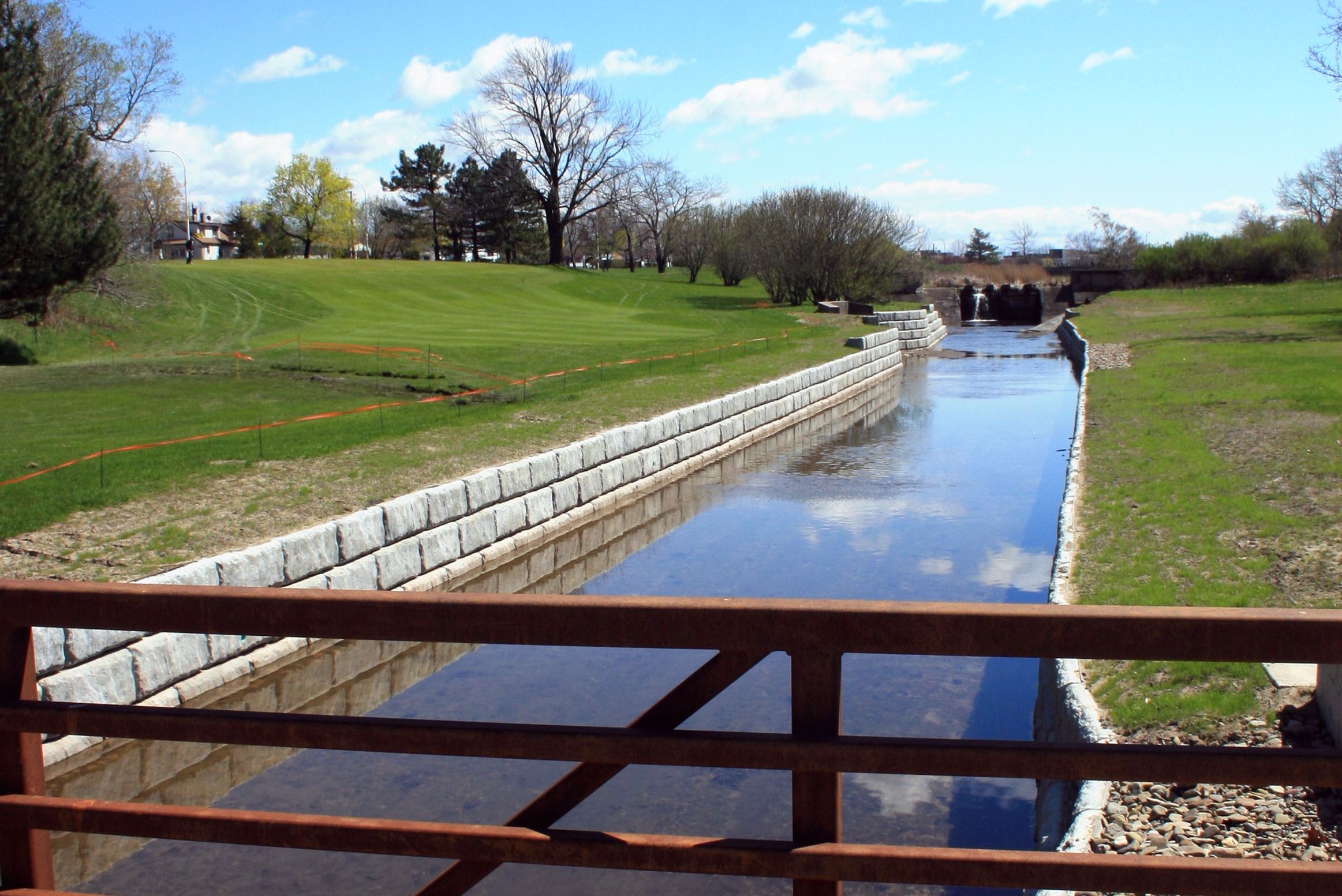