In the spring of 2012, a massive construction project to transform Rhyl's riverfront area broke ground, with the goal of increasing tourism and boosting the local economy. Another key goal of the project was to provide a safer, more scenic route for pedestrians and cyclists as part of the Wales Coast Path which follows the entire coastline of Wales.

Rhyl is located in North Wales on the Irish Sea at the mouth of the River Clwyd. Plans for rehabilitating this area started as far back as 2004, and the final design included a sustainable pedestrian/cycle bridge, coastal erosion and flood protection, a new public square, deepening of the channel to improve navigation, and extending the quay (jetty) wall 617 feet (188 lineal meters). To accomplish this, the site required an aesthetic retaining wall solution that could meet the complex structural requirements of the site, including significant tidal fluctuations. 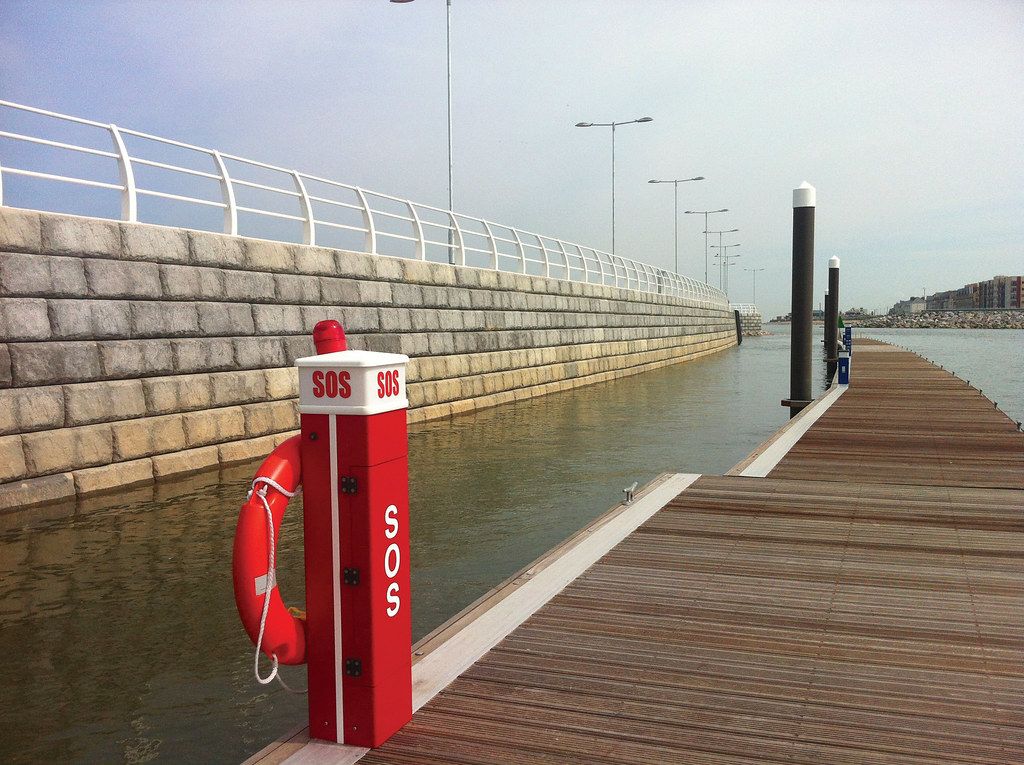 These retaining walls allowed the town of Rhyl to extend its jetty and protect its marina from storms.

Initially, designers considered conventional solutions such as cladded sheet piles, but this solution was too cost prohibitive.

Searching for a wall solution that would match the visual scale and structural requirements, local officials turned to local Redi-Rock manufacturer CPM Group. Designers were able to provide an aesthetic Limestone finish with the Redi-Rock Positive Connection (PC) System at a lesser cost than other options.

The Redi-Rock PC System is a mechanically stabilized earth retaining wall system that utilizes 1,518 pound (689 kilogram) precast blocks and a corrosion-free reinforcement system without special connection components. Unlike friction connections featured in other geosynthetic reinforced wall systems, there is virtually no chance of a pullout connection failure with the PC System because the grid wraps through the block. Because the PC System's reinforcement is non-corrosive, it is a great fit for projects like this that are exposed to salt water.

The wall design on this project was completed by Groundsolve Ltd Geotechnical Consultants in conjunction with CPM Group. At its tallest point, the wall needed to stand 24.3 feet (7.4 meters) high and was designed based on the 100 year extreme water level from the Environment Agency.

Since there are small spaces between the modular blocks, the water level will rise behind the wall as the tide rises and a lag of 6.6 feet (2 meters) was assumed in the design to model the tide going out. Due to the forces which were applied to the system caused by soil pressures, water pressures, wave action, and surges acting behind the wall, the maximum wall height was limited by the tensile capacity of the geogrid strips to 16 blocks (24.3 feet or 7.4 meters). The wall is reinforced using Miragrid 10 XT, 20 XT and 24 XT geogrid. 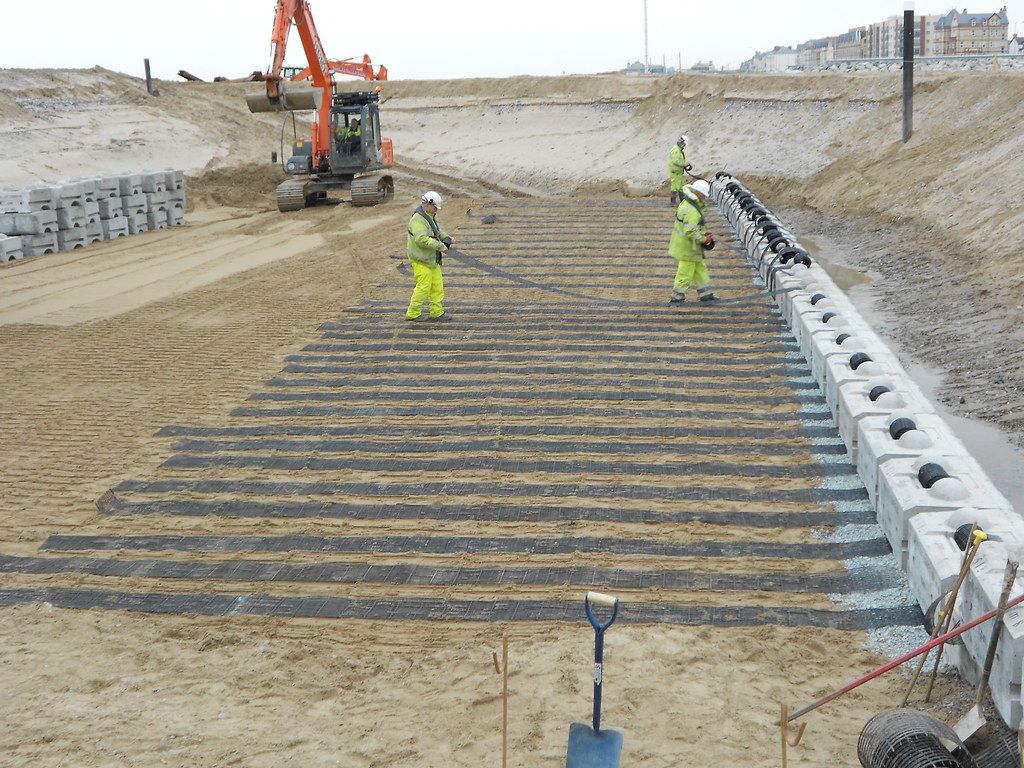 The installers had to work around tides and deal with very tight staging areas.

Due to the location of the site, construction traffic required careful management to avoid deliveries during peak traffic and at night.

The Redi-Rock blocks were installed on a concrete foundation. The base course of blocks was installed in 164 feet (50 meter) sections, then the geogrid was threaded through the blocks. An underwater grout was used to fix the blocks in position and concrete was also poured in the void between the back of the sheet piles and the block face. The layers of backfill material were then placed and the geogrid pulled into position before the next course of blocks was installed. When the site was inundated during high tides and/or bad weather, any silt deposited needed to be removed once the tide retreated.

To prevent scour, 9.8 to 13.1 feet (3 to 4 meters) long steel sheet piles were installed. In addition, a reinforced concrete coping was cast on-site which tied the top course of blocks to the lower course and also created a beam along the wall.

Using the Redi-Rock PC System allowed the contractor to install approximately 50 blocks during a tidal cycle. Installation of the entire quay wall was completed in just 30 weeks.

"The Redi-Rock product is very simple but massively effective," explained Jamie Turner, Site Agent for Dawnus Construction. "It is easy to install and the end product looks fantastic, I would definitely use this product again. The service we received from CPM was second to none. They always made a conscious effort to put our needs first.

The "flag ship" bridge opened in October 2013 and locals are excited about the recreational opportunities the project has created. 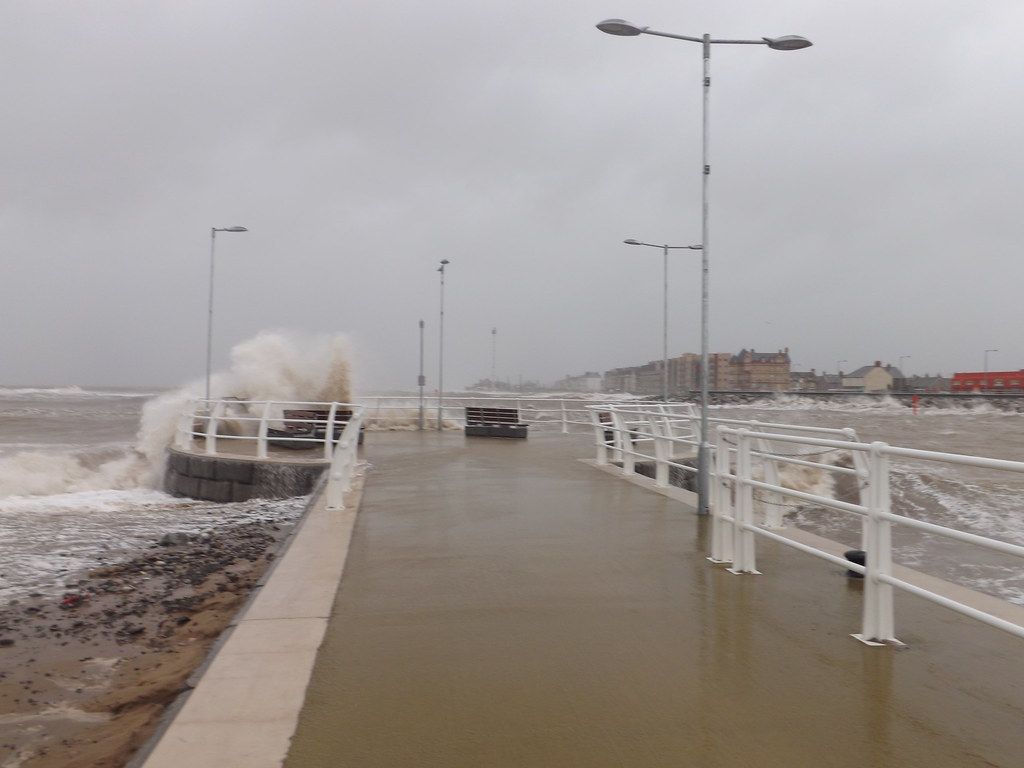 These walls are engineered to withstand massive storms. City official were so impressed after the first storms, they decided to use Redi-Rock walls on multiple projects throughout the city.

Officials performed close monitoring of the finished wall and backfill after it was completed to ensure there had been no settlement and the Redi-Rock wall was withstanding wave action as expected. The monitoring confirmed that the wall was performing exactly as engineered. During the massive storms of early 2014, the Redi-Rock walls performed exactly as engineered. The City was so impressed following the storms that they specified Redi-Rock for multiple projects throughout the city.

This project was the recipient of the 2013 Rocky Award for "Water Application Wall of the Year" from Redi-Rock International. The Rocky Awards are an annual honor recognizing the best Redi-Rock projects completed each year across the globe.