When Selektor Projekt OÜ won the tender for the Paldiski Road Viaduct Project as part of Estonian Railway’s multi-year expansion project, the team of engineers was ready to take on the three-part challenge of designing a railway viaduct, a widened embankment, and a retaining wall to support a new rail line through the center of the capital city of Tallinn.

“We had already developed a vision during preparation for the tender, and now we had the chance to really design something outstanding in the very center of the city,” said Erki Reinsalu of Selektor Projekt.

While each aspect of the project presented an independent engineering feat, the challenges didn’t stop with combining the three elements. The municipality of Tallinn and the National Heritage Board required the new infrastructure project to meet the codes of today, while matching the aesthetics of the existing viaduct that had been constructed in 1926.

On top of the engineering and aesthetic demands, tight timelines and an even tighter construction footprint would be required due to continuous railway traffic on the adjacent rail lines and viaduct throughout the project. 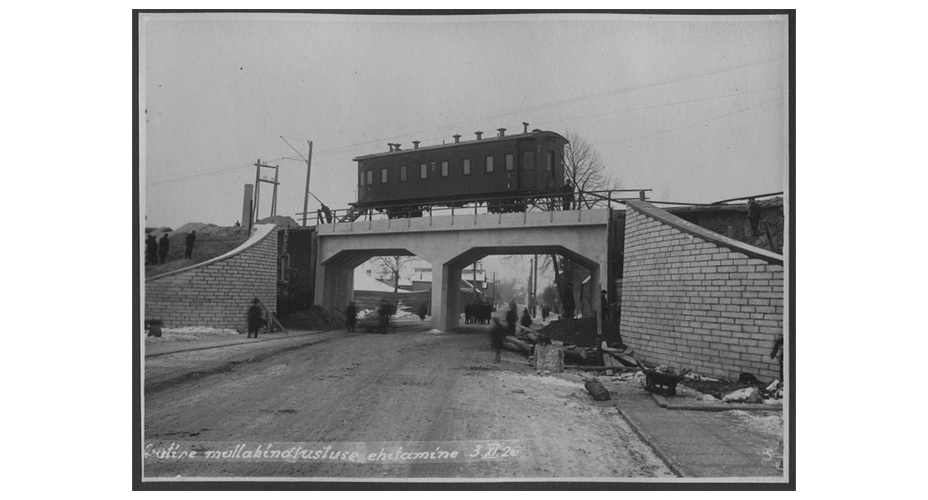 “Bridge engineering, as in any other structural engineering niche, is gradually becoming more than the composition of structurally sound systems,” said Reinsalu. “It is an art of bringing together multidisciplinary parties.”

That multidisciplinary initiative began with a preliminary design concept from Reinsalu and Tarmo Jõe, the other key member of the design team at Selektor Projekt, that utilized a small block, mechanically stabilized earth (MSE) retaining wall to create the space for the embankment. However, they soon discovered that their proposed solution couldn’t meet the demands of the project.

“[That option] turned out unfeasible to implement due to very heavy soil and traffic loads and restricted earthworks,” explained Reinsalu. “At one point we were even worried that existing railway embankment widening could not be done with such limited anchorage.”

After considering a last resort plan of a cast-in-place gravity wall that would have exceeded the initial time and budget calculation twofold, they were presented with a solution that would check not only their design constraints but also the aesthetic concerns.

Local Redi-Rock manufacturer Pärnu Graniit OÜ offered a solution to use massive precast modular blocks. By using the Redi-Rock Positive Connection (PC) system, they could meet the confined space requirements while supporting the necessary loads – and do it at a competitive price. 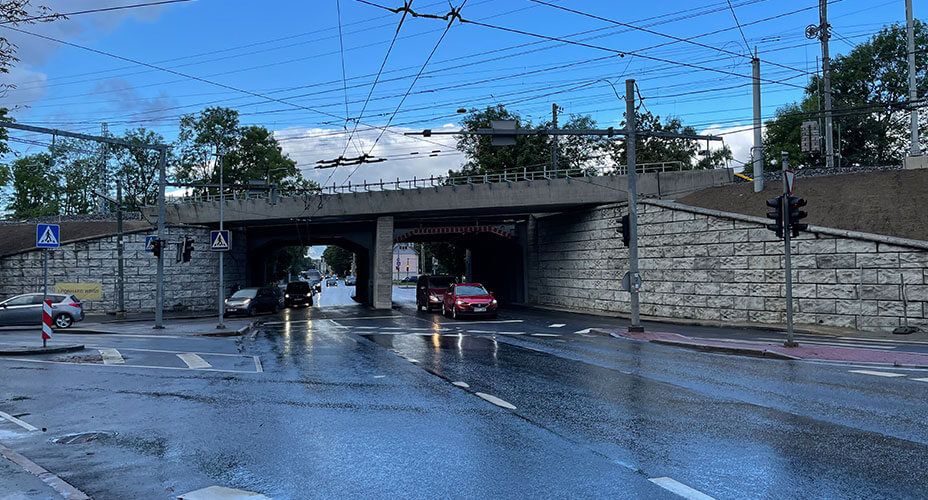 The Redi-Rock solution allowed Selektor Projekt to meet Eurocode design standards while complementing the aesthetics of the adjacent historic viaduct.

Where many MSE wall systems rely on friction or mechanical fasteners for the geogrid connection, PC blocks are cast with a center core slot where a 12-in (300-mm) wide strip of geogrid wraps through the block. By significantly reducing the chance of a connection failure and providing a weight-independent connection, the connection strength is consistent from top to bottom of the wall, allowing designers to factor almost the entire tensile strength of the geogrid into their design.

In this instance, with just 14.8 ft (4.5 m) of geogrid tailing behind the wall that ranged from 5 – 19.7 ft (1.5 – 6 m) in height, the wall could support the significant load from the crest slope of the embankment, as well as the load from the railway infrastructure and traffic, where systems with less connection strength at the top of the wall couldn’t within the confined space.

Redi-Rock blocks are manufactured with wetcast concrete, which allows the face of the blocks to carry rich, detailed textures. The Redi-Rock Kingstone texture provided the natural stone appeal that the city planners and architects, as well as the National Heritage Board, hoped to carry over from the original structure’s limestone block walls.

While the finished retaining walls on each end of the bridge present a cohesive appearance, the versatility of the Redi-Rock system allowed the design team of Reinsalu and Jõe to modify the engineering behind the walls to suit the varied demands of the project.

Ultimately, the 1,969 lineal ft (600 linear m) of retaining wall allowed the embankment to be widened by 14.8 – 19.7 ft (4.5 - 6 m), creating space for the new railway track and viaduct. The bridge itself was skewed 53 degrees and required complicated post-tensioning over two spans of 46 ft (14 m) supported mid-pier with a V-shaped body to minimize the ground area between the traffic lanes. 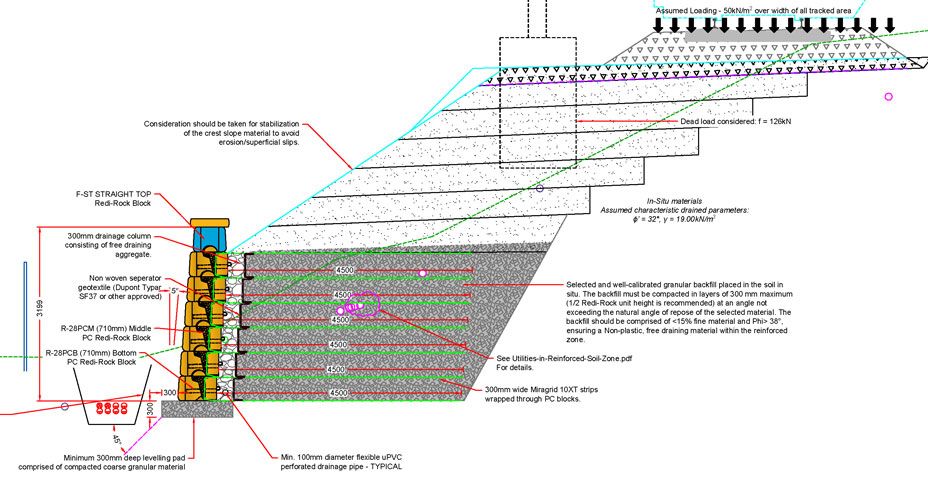 A cross section of the Redi-Rock wall utilized to help support the embankment for the new rail line through the heart of Tallinn.

Construction of the retaining walls began in January 2021 with two parties splitting the work. Pärnu Graniit not only manufactured the blocks, but they also delivered and placed them with a crew of three and a hydraulic crane operator. LEONHARD WEISS Viater OÜ, a LEONHARD WEISS OÜ subsidiary, managed the excavation and geogrid placement with a crew of two and an excavator.

As the work commenced, weather was an additional factor that influenced the installation.

“At some point the temperature dropped below -20°C [-4°F]. It was challenging, but it was still possible to construct the wall,” explained Aleksei Dohin, project manager for LEONHARD WEISS OÜ.

Teet Rehtla, sales manager at Parnü Graniit, explained that the ability to install Redi-Rock in varying weather conditions is just one advantage over a cast-in-place solution, which requires optimal weather conditions for concrete curing.

“With each machine placed block, we’re installing 0.5 square meter [5.4 square feet]. The speed of Redi-Rock installation makes it a great choice for situations like this where the timeline matters in keeping the entire project on schedule,” said Rehtla.

As construction progressed, what had already been a heavily watched project throughout the city garnered even more attention. Dohin explained, “Once the wall started to take shape a lot of positive feedback started coming in from bypassers who saw the wall.” 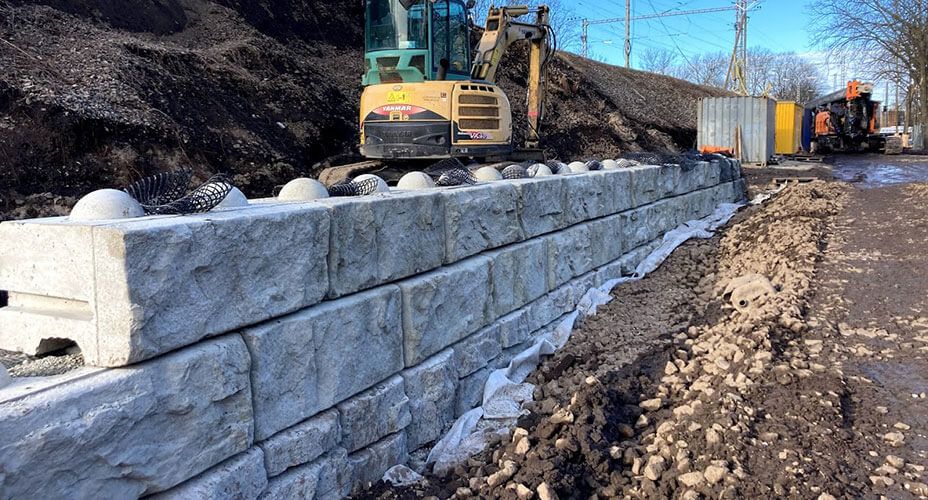 All construction of the retaining wall took place within the confined footprint, and continuous, regular operation of the railway traffic was maintained.

The wall was finished by May 2021, and positive feedback about the entire project continues to roll in. The project achieved the ultimate balance – enriching the urban environment with a structurally sound solution that will last for generations to come, while also providing details that please passersby when viewed up close.

“I can honestly say Paldiski Street railway bridge stands out with its majestic curve-shaped walls that complement the modern shaped bridge deck and V-shape mid-pier – which on their own would stand out next to the existing old railway bridge – but are beautifully balanced and brought together with the old by rough surfaced stone blocks,” said Reinsalu. 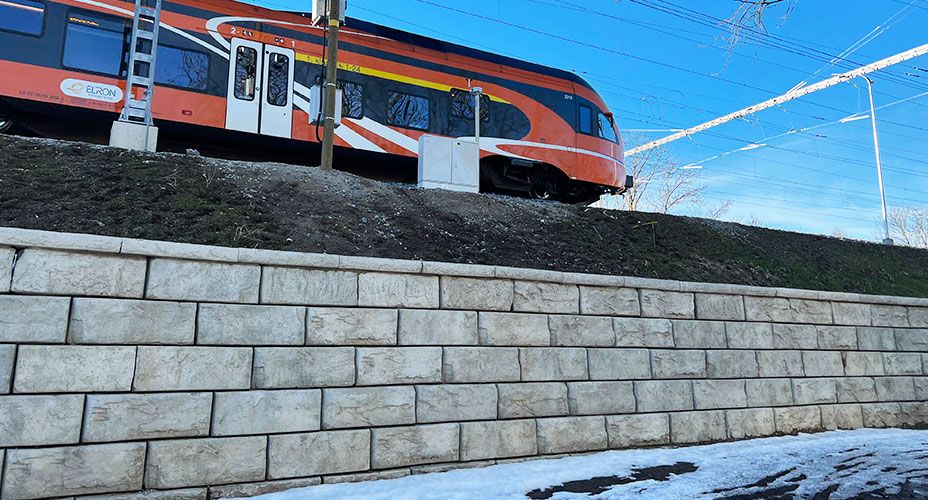 The retaining wall not only provided space for the viaduct, but also helped with the widening of the embankment to allow the addition of another rail line.

Kingstone Texture Blocks - Redi-Rock Kingstone appears weathered by water and time like the crown of a natural stone outcropping.