When a sharp turn in a stream began eroding homeowners' yards in storm events, the city of Florence, Kentucky needed a solution, and fast. Erosion to the 10-foot (3-meter) high stream bank was becoming a major issue, and the city wanted to take care of the problem before it caused serious damage.

The city worked with engineers from Viox & Viox and H. C. Nutting/Terracon to tackle the issue and find the best solution. The city's goals for the project included stabilizing the stream banks while creating an aesthetically pleasing green area for residents along the creek to continue to enjoy. Minimizing excavation and disturbance to residential yards was also a priority.

"The ability to construct the wall without geogrid reinforcement was critically important to this project," explained Justin M. Verst, P.E. with Viox & Viox. "The construction space was tight." 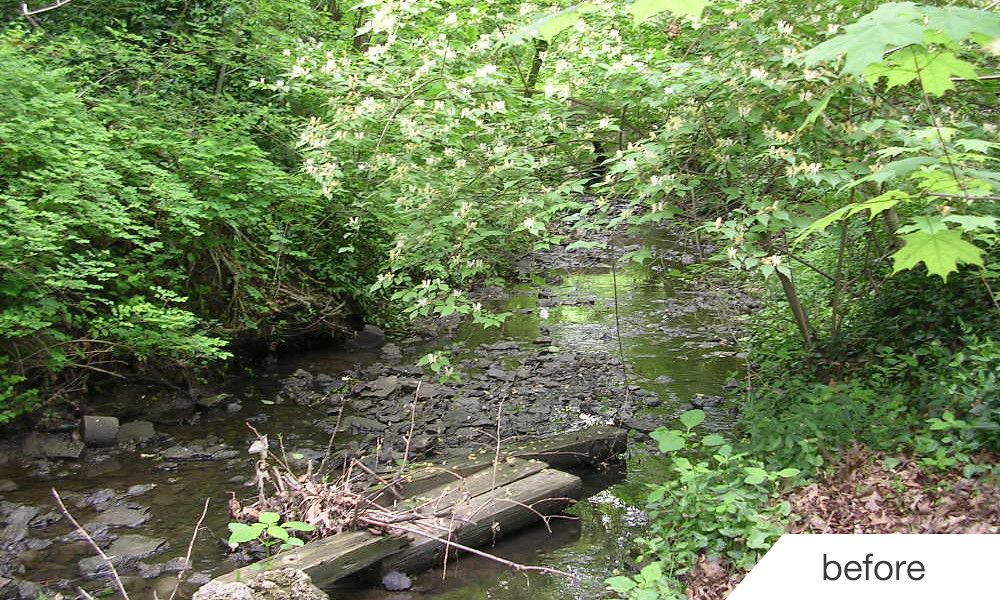 Erosion of this stream bank was cause for concern for the neighborhood through which it runs.

"We originally considered using gabion baskets or plain concrete walls, but we wanted an aesthetic finish to the channel," said Peter Glenn, City of Florence Project Manager. "We chose Redi-Rock because we had more finish options, including the Ledgestone face. Plus, it was very economical."

Massive, one-ton Redi-Rock blocks are known for their ability to harness the power of gravity to build tall walls that often don't require reinforcement. For this project, the ability to build the 13.5-foot (4.1 meter) high channel walls without reinforcement allowed the walls to be built with minimum excavation and disturbance to the adjacent properties and yards.

Redi-Rock gravity walls also have a proven track record in storm channel applications. The blocks stack like giant Legos, making them quick and easy to install using an excavator and a small crew. Local manufacturer Redi-Rock Structures of OKI worked closely with the City of Florence to provide a Redi-Rock solution for this project.

Redi-Rock's Ledgestone face "...matches the Cincinnati and Northern Kentucky stone bedrock we have in our area, so it's very visually appealing," said P.E. Jeff Barrow of H.C. Nutting/Terracon. These blocks have the same dimensions, weight, and engineered capabilities as other Redi-Rock blocks, but with the look of natural, stacked ledgestone.

"It's a home run when you can put up an aesthetic channel like this instead of the usual concrete channel or gabion baskets, economically," Glenn said.

After photo documentation of the site, H. C. Nutting/Terracon performed the global and internal stability calculations for the channel walls, as well as designed erosion control features so the wall could handle the high water flow. 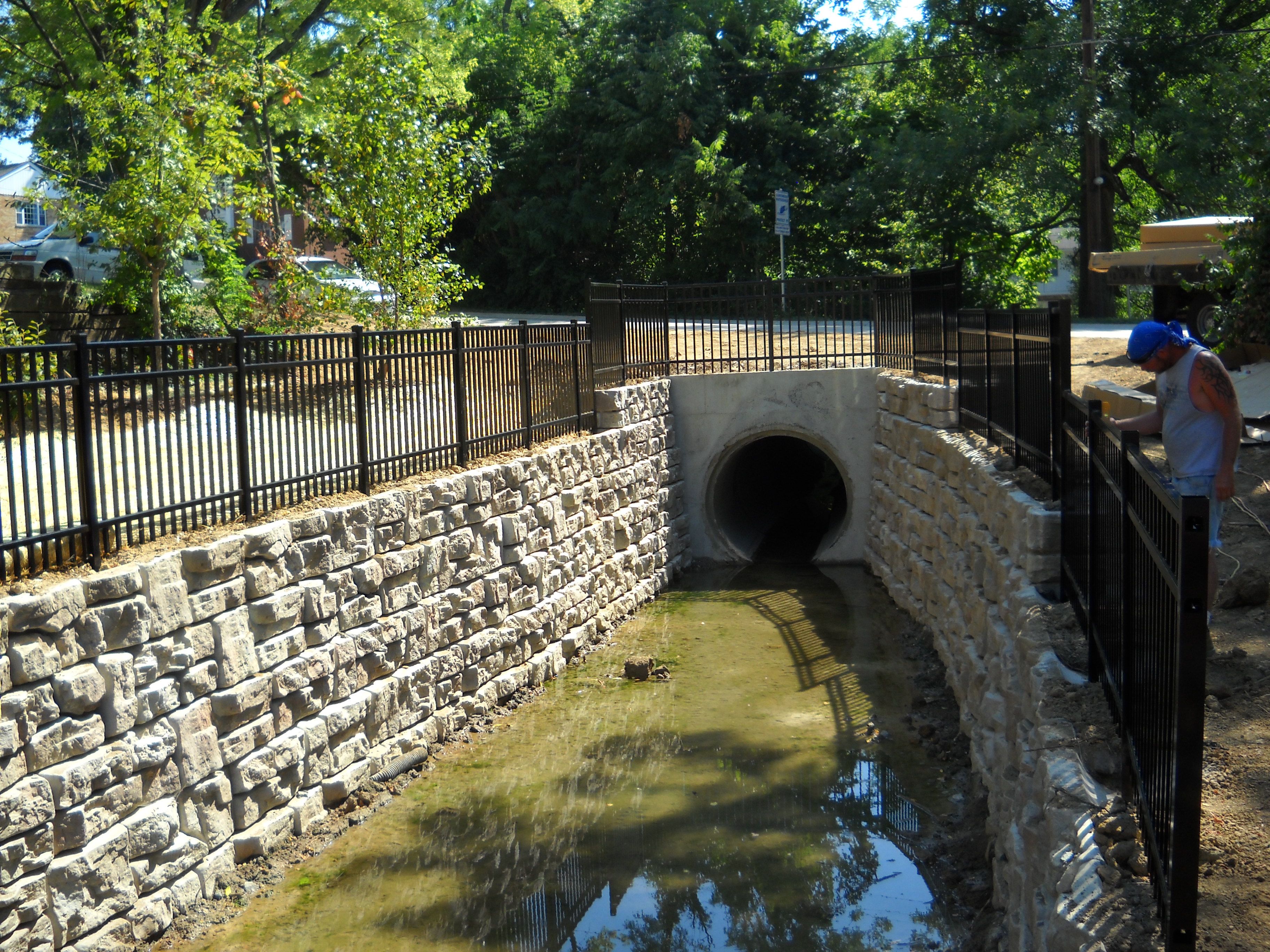 Redi-Rock gravity retaining wall blocks in the Ledgestone texture were chosen to provide support to this creek while giving it an aesthetic look the neighborhood could be proud of.

One section of the walls has a unique backfill design to compensate for the high water flow during storm events at the intersection of the streams.

"The flow from one of the creeks was overriding the top of the wall, so we designed a controlled density fill to reinforce the back of the wall so that the flow would go over the top. We made the wall impermeable to water to prevent erosion or scour from behind the wall," Barrow explained.

Due to environmental permitting, the entire channel had to be constructed from the top of the stream banks. Contractor Dudley Construction Company cut benches along the creek banks and selected Redi-Rock of Kentuckiana to assemble the wall as they started at one end of the channel and backed their way out.

The rear of the storm channel is backfilled with crushed stone, which allows water to drain properly from behind the walls, preventing hydrostatic pressure buildup.

At the time during which Redi-Rock Structures of OKI was awarded the project, Redi-Rock was just beginning to produce the new Ledgestone face blocks. The production crew had to work closely with the contractor Dudley Construction Co. and the installer Redi-Rock of Kentuckiana to synchronize production and shipment to allow the wall to go up quickly.

In total, the 4,800 square foot (446 square meter) combination of walls took less than two weeks to install. At the highest point, the walls stand 13.5 feet (4.1 meters). Once the walls were completed, Dudley Construction Co. installed a decorative metal fence along the top edge of the channel. 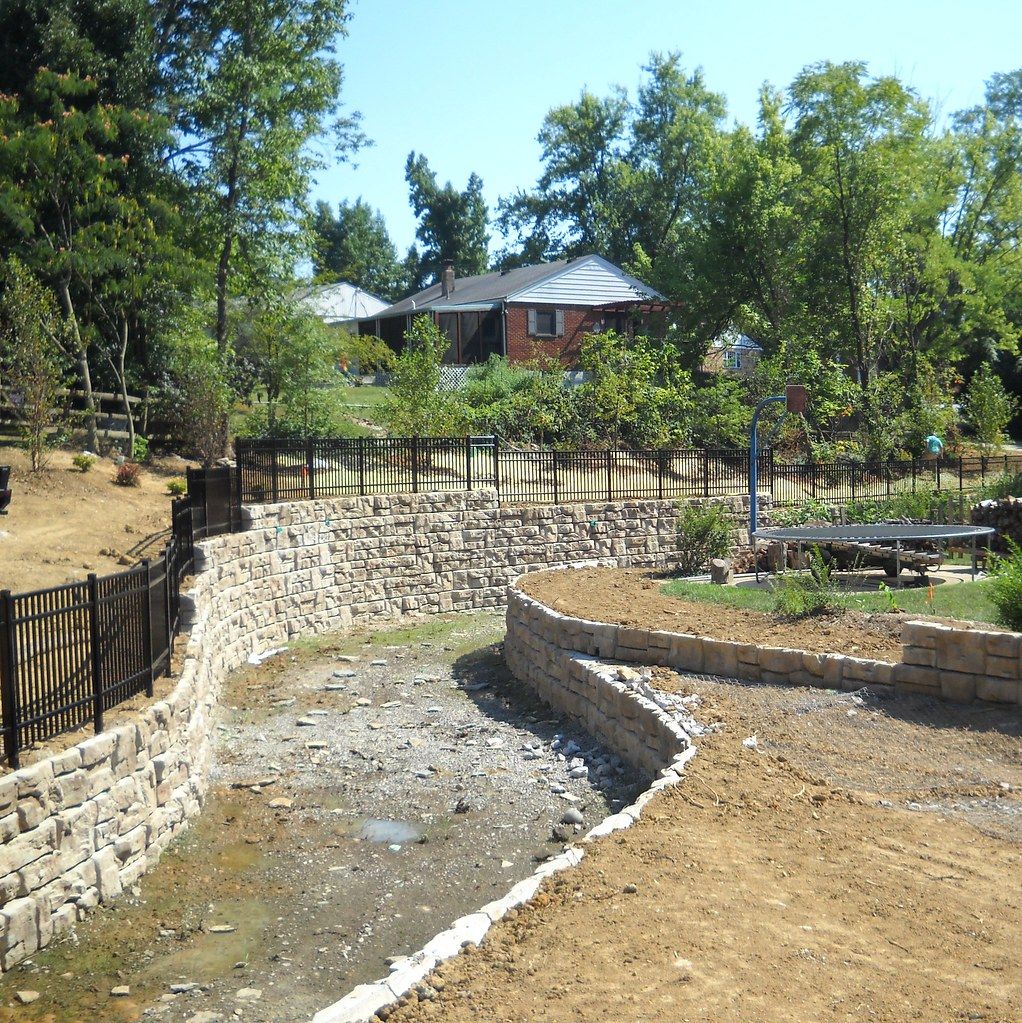 A decorative metal fence was added to the top of the channel wall to complete the project.