During the 19th century, early settlers to Cincinnati, Ohio, followed the Lick Run valley and stream to settle in the developing city along the Ohio River. To control flooding in the area, the stream was enclosed in a 20-foot-diameter storm sewer in 1893. Soon after, during the advent of indoor plumbing, homes were tied into the system to then carry both rainwater and sewage.

After a century of combined use and frequent sewage overflow into nearby Mill Creek during heavy rains, Cincinnati’s Metropolitan Sewer District (MSD) needed a solution for the valley’s worsening pollution crisis.

The massive transformation of the polluted and economically blighted area had to begin with the clearing and retention of the earth in today’s South Fairmont neighborhood between Westwood and Queen City Avenues. 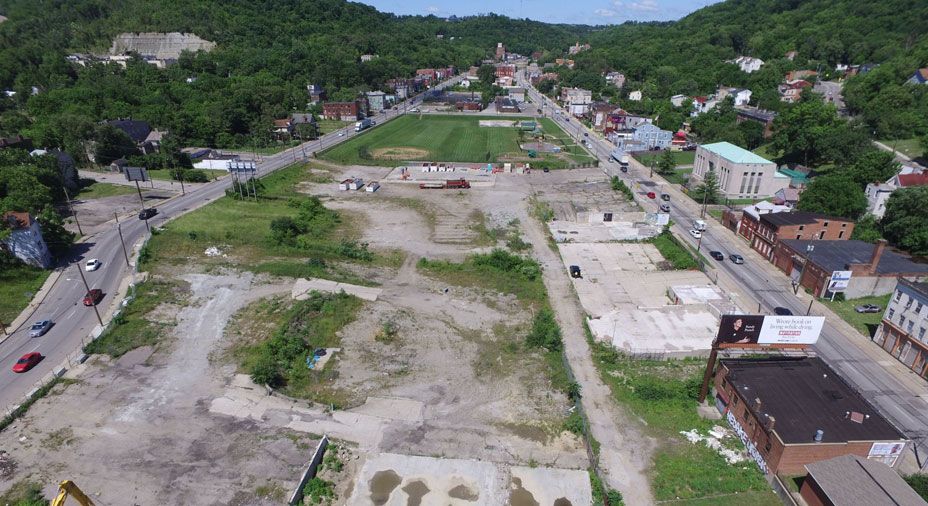 Project Groundwork's transformation of the Greenway will extend into future efforts to revitalize the surrounding South Fairmount community.

In accordance with EPA demands to drastically reduce sewage overflow in the valley and throughout the greater Cincinnati area, MSD established a large-scale “green” solution called Project Groundwork in 2009. To address overflow reduction with environmentally, socially, and economically sustainable solutions, a 1.5-mile stretch of the valley would be transformed into both a functional urban waterway and a multi-use community recreational space called Lick Run Greenway.

Eleven Redi-Rock retaining walls were required to support the project’s new infrastructure and to avoid impact to the existing combined sewer, utilities, and roadways. Redi-Rock’s Limestone texture was selected to blend seamlessly with the project’s natural elements.

The construction of the walls was completed in 2020 following the implementation of new storm sewers, stormwater detention basins, and bioswales. The once buried and contained Lick Run stream was resurfaced, in a process called, “daylighting”, as a mile-long constructed waterway through the Greenway. The project’s remaining infrastructure improvements included public recreation areas and gathering spaces, walkways, pedestrian bridges, lighting, and landscaping.

Using Redi-Rock Wall+ Software (RRWall+), Justin Amlung, P.E. with Civil Solutions designed the project’s Redi-Rock retaining walls, most of which were needed to retain the earth along Westwood Avenue on Lick Run Greenway’s south border. The remaining Redi-Rock structures served as retaining walls to support grade changes within the greenway.

The gravity walls in the Lick Run project were designed to be constructed with Redi-Rock solid retaining wall blocks. Available in block widths of 28, 41, and 60 inches (710, 1030, and 1520 millimeters), these large wetcast blocks are like one-ton Lego blocks that interlock to build walls up to 15-feet (4.5-meters) tall.

Amlung designed a single reinforced retaining wall against an existing roadway abutment using Redi-Rock’s Positive Connection (PC) Blocks for MSE walls. With space to excavate, the use of geogrid wrapped through the PC blocks increased durability and allowed for a taller wall height.

Redi-Rock 9in (228.6mm) step down units were used to address the gradual grade of the roadway abutting many of the Redi-Rock walls. The 9in blocks, at half the height of standard Redi-Rock blocks, helped ease the transitions at the top of the wall between blocks.

Josh Turton with block supplier Redi-Rock Structures of OKI noted that the step down also allowed the project to meet ODOT dimension requirements for the cast-in-place coping atop the walls.

The retaining walls abutting roadways and waterways were topped with decorative metal guardrails, which added aesthetic appeal and safety measures, and also acted as barriers to restricted waterway areas.

Amlung explained the benefits of utilizing Redi-Rock for the retaining walls within the expansive project.

“[The developer] put a premium on aesthetics and durability,” he said. “When you compare Redi-Rock to a small-block competitor in a water application, there really wasn’t much of a decision to be made.” 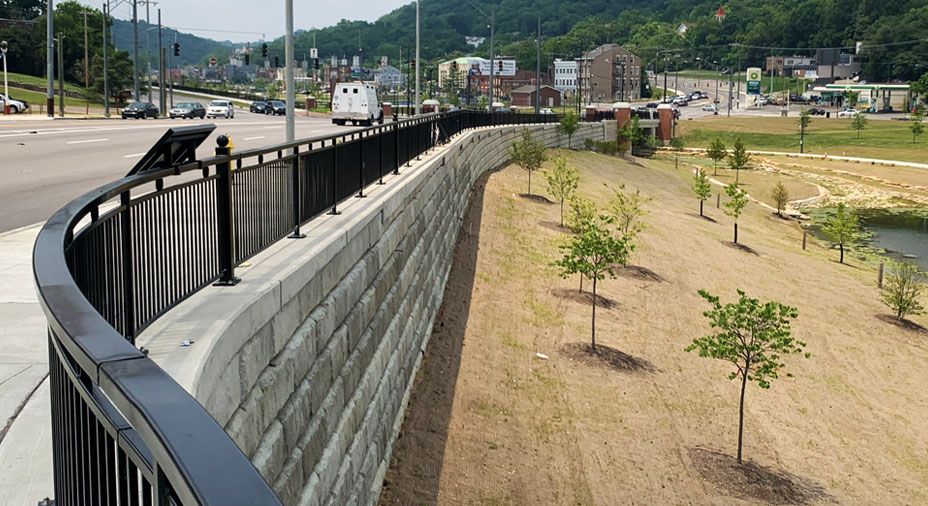 Dave Landwehr, Project Manager with Structures, Inc., Cincinnati who led the installation crew, noted that the project involved numerous challenges like contending with changing traffic patterns along the construction site and tight work spaces between the roadway and new stream bed. The 3-5 man wall construction team utilized an excavator, rubber tire loader, skid steers, and a conveyor belt truck to assist with their work.

The project team constructed a total of 28,000 square feet (2,601 square meters) of Redi-Rock gravity and reinforced retaining walls to complete this large-scale project spanning 1.5 miles (2.4 kilometers). Although the construction of the walls spanned over two years as the entire project progressed, the total work time occurred in about 30 days, averaging 900 square feet (83.6 square meters) of walls installed daily. 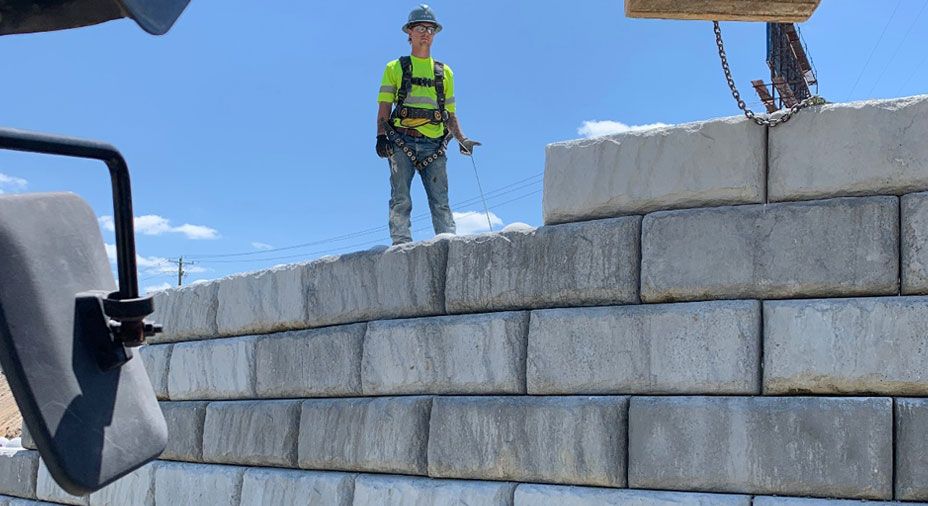 At completion in 2021, project planners expect the Lick Run Greenway to cut about 400 million gallons of Combined Sewage Overflows (CSOs) per year. The public walkways and park areas are currently open for the public to enjoy and the native grasses, trees and shrubs added to the valley are expected to be fully established and in full bloom by 2022.

What had been an environmental disaster a few short years ago for the historic valley has been transformed into an environmentally-friendly, public-works project usable as a picturesque public space. Moving forward, MSD and the City of Cincinnati plan to extend the sustainable infrastructure program to continue the community’s economic revitalization. 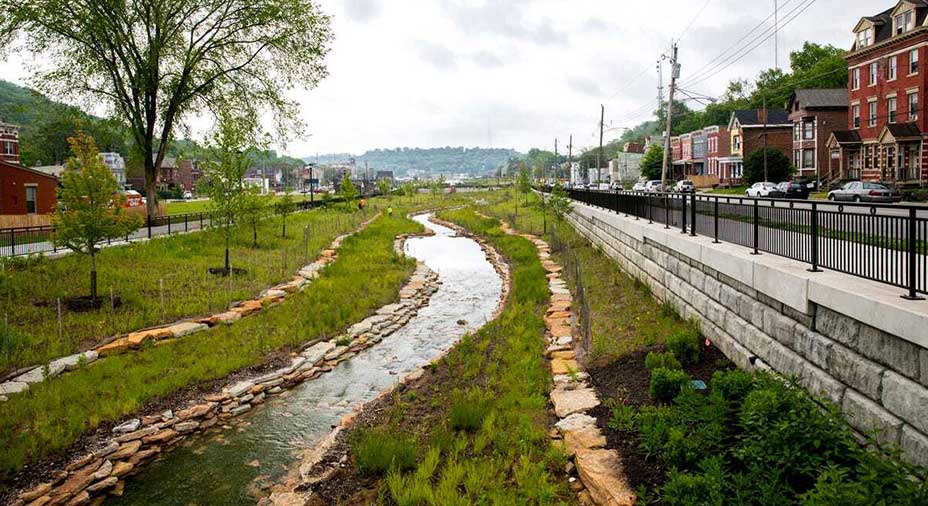 Lick Run stream resurfaces as a part of the Greenway's mile-long constructed waterway.