In 2011, the Canadian National (CN) Railway and the Montreal Metro began construction on a major renovation project. The goal of the project was to eliminate an at-grade crossing where the CN Rail line crossed over the Societe de Transport de Montreal (STM) light commuter Metro line.

These two lines ran through a narrow corridor with several sections of track overlapping. To completely separate the tracks, plans were made to elevate the CN Rail line on a bridge structure and excavate to relocate the Metro underground.

To elevate the CN Rail line, designers needed to build a gradual, walled slope leading up to a massive concrete bridge structure and then down the other side. This narrow "causeway" was designed with room for a second line, although only one was installed at first. 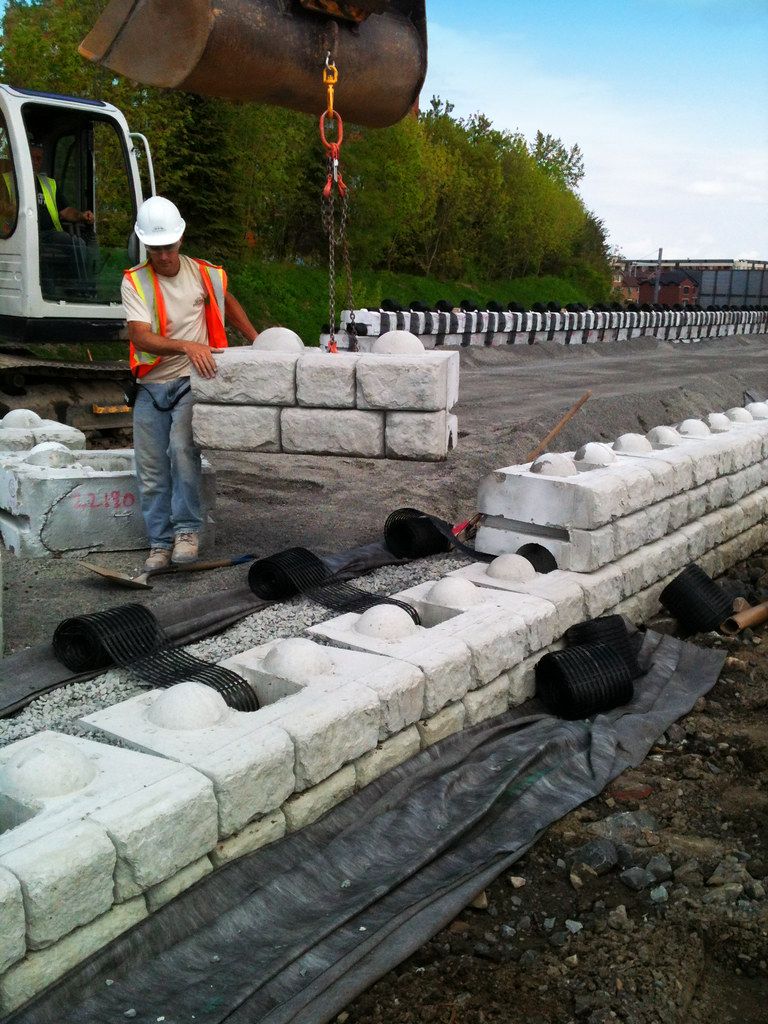 Back-to-back poured-in-place concrete walls were an option for creating the ramps, but when CN Rail geotechnical engineers saw the Redi-Rock Positive Connection (PC) System at the Transportation Research Board (TRB) meeting in early 2011, they began incorporating Redi-Rock PC walls from local manufacturer Graymont Materials into the design.

"The PC System is the only block with this type of connection which allowed it to handle the loads," explained David Chartier, junior engineer with V. Fournier & Associes. "When you have massive loads so near the block facing, it's hard to make a wall that will work. The walls are very high and the load is very close, but the civil engineering of this block made it a good fit."

The Redi-Rock PC System is an ideal solution for this project because the PC System: 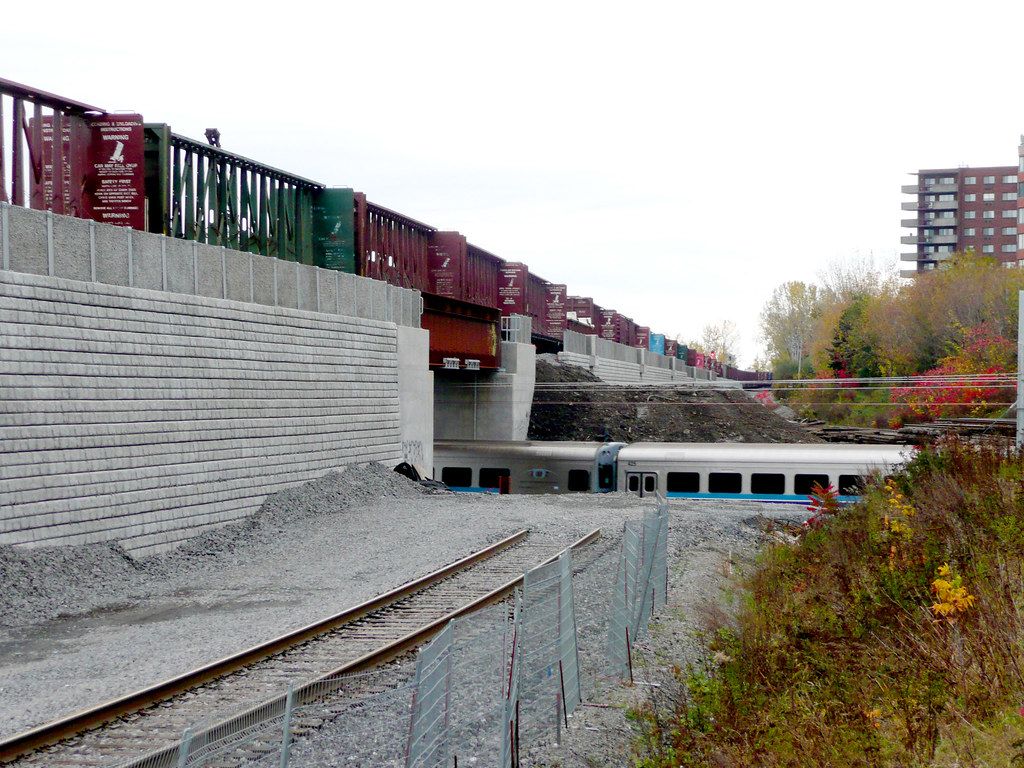 Mirafi Miragrid 24XT geogrid strips were used on this project to provide soil reinforcement in these mechanically stabilized earth (MSE) walls. To install the geogrid for a PC System wall, a 12 inch (305 millimeter) wide strip of geogrid is wrapped through each retaining wall block, tying the Redi-Rock facing blocks to the reinforced soil mass with a weight-independent positive connection. The geogrid extends from the back of each retaining wall to the back of the opposite retaining wall.

The back-to-back walls on this project required a temporary end made with double 90 degree corners. The corners and short end wall were necessary for the construction sequence of the walls and bridge abutments but were removed before rail traffic used the lines. To build the double 90 degree corners, near vertical walls were constructed using a combination of zero batter and standard batter PC blocks.

In addition to the retaining walls on the project, two rows of freestanding "force protection" blocks were included in the top of the walls to prevent workers from falling from the raised tracks. The design also incorporated several emergency shelter "bump outs" where a break in the freestanding walls opens up to safety cages into which workers can duck when trains pass.

In total, the project required 7,800 Redi-Rock blocks in the Cobblestone texture - equaling 44,850 square feet (4167 square meters). Trains made their first run on the line in late 2013, and the project has been performing exactly as engineered. "It's looking beautiful, that's for sure. The city is very happy," said Charles Poulin, Ing. of CRT Construction.

This project was the co-recipient of the 2013 Rocky Award for "Commercial Wall of the Year" from Redi-Rock International. The Rocky Awards are an annual honor recognizing the best Redi-Rock projects completed each year across the world. 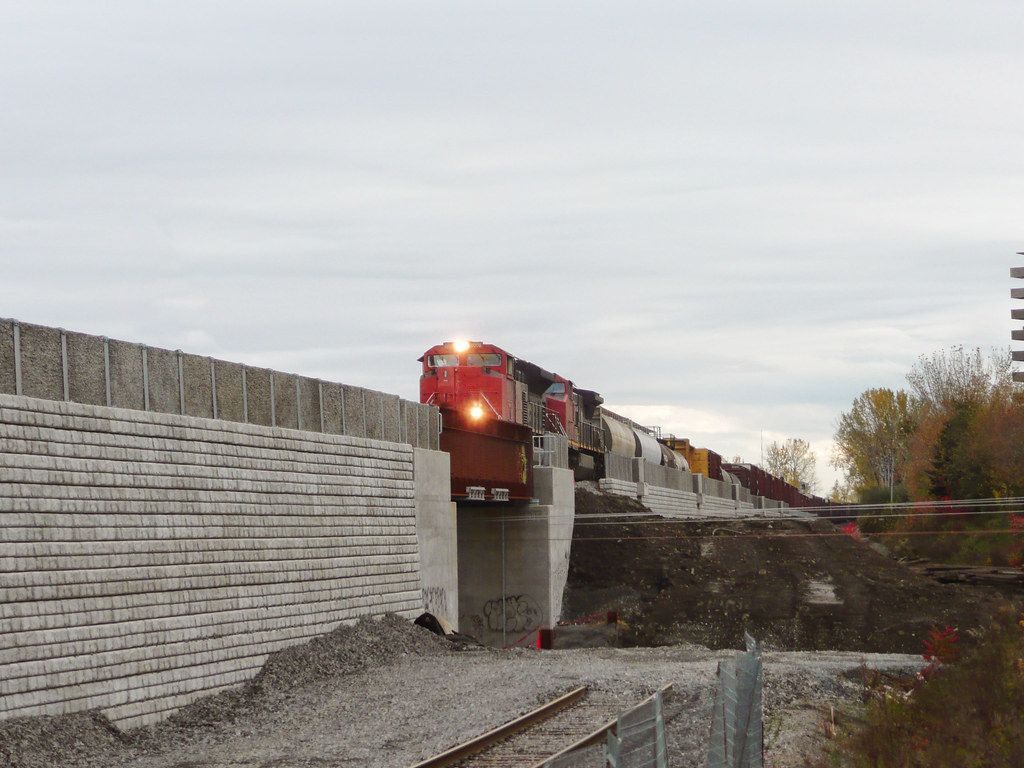 After the project was completed, it was monitored very closely. All tests have shown that the walls have performed exactly as engineered.