In January of 2009, Whatcom County in Washington had a rainstorm. Not just any rainstorm though - this rainstorm happened when there was already snow on the ground. The storm hit an area near the Middle Fork Nooksack Diversion Dam particularly hard, causing significant erosion, washout, and landslide damage.

There were several stretches where the erosion cut into the roadway 2 to 3 feet (0.6 to 0.9 meters) deep, all the way up to 8 to 10 feet (2.4 to 3 meters) deep. Originally this site had 2 culverts passing under the roadway, but "the culverts had become plugged during the storm event. The debris load overtopped the road and culvert, and completely filled in the diversion structure located below," explained Aaron Hartvigsen, P.E. of GeoEngineers Inc.

The slide made this road completely impassable, which was a major problem because it provides the only access to the diversion dam which is critical to maintaining a clean water source for the City of Bellingham, especially during dry summer months. 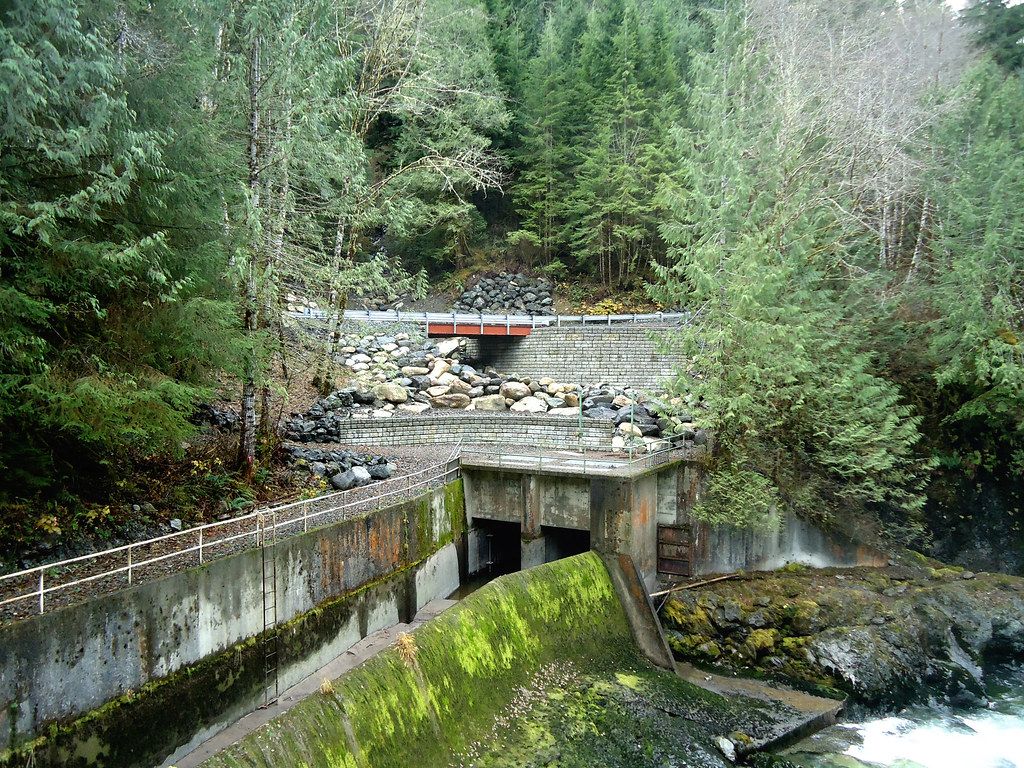 The access road bridge was rebuilt using Redi-Rock to provide a long term solution to protect against washouts during bad weather.

For a long term solution, The City turned to GeoEngineers, Inc. The area is subject to very high dynamic forces as a result of the debris flows that occur during major climatic events, so the engineers' goal was to design a solution that would re-establish access and reduce the risk of future washouts and overtopping of the access road. Redirecting future water and debris flow away from diversion dam facilities was a major priority.

To accomplish these goals, GeoEngineers created a plan to realign the drainage channel and add a bridge made using two flatbed railroad cars. The bridge required abutments and wing walls, for which Geoengineers recommended "only Redi-Rock walls because they are unique in that they are large blocks that have a positive connection between the geogrid and the block itself," said the engineering report that GeoEngineers presented to the City. "The big blocks and positive connection provides the greatest resistance under these circumstances for the lowest cost."

Installation of these upper walls was handled by Trimaxx Construction and was completed in just two weeks from the time excavation started to the time traffic was running on the bridge. "It was a pretty simple installation," explained Todd Snyder of Trimaxx Construction. "Every other lift got the geogrid tiebacks. For setting the blocks, we used a 225 loader and backfilled and worked our way up the wall. Then we set two rail cars on top, and welded them together to create a bridge."

The railroad cars sit directly on the Redi-Rock abutments, and the Redi-Rock wing walls help prevent erosion around the bridge structure. These walls utilized the Redi-Rock reinforced solution, which relies on a strong connection between the geogrid and the block itself. The upper walls were reinforced with Miragrid 5XT. 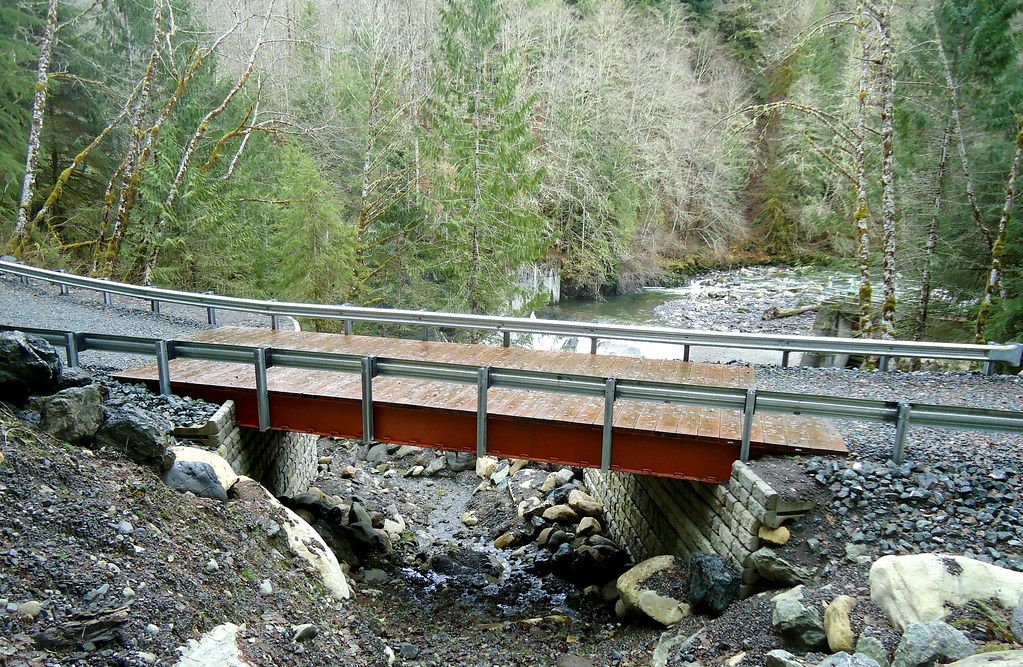 Two railcars were set on top of Redi-Rock abutments to create the access road bridge.

On the lower walls, "we arrived at a gravity system because of the shorter height requirement. Using gravity walls allowed us to reduce excavation on that portion of the project, because we didn't have to cut the slope back as far," Hartvigsen said. Redi-Rock gravity walls harness the power of gravity by using 2400 pound (1,088.6 kilogram) blocks-weighing as much as a Budweiser Clydesdale. The massive size of each block translates into reduced excavation and faster installation.

The ability to utilize both gravity and reinforced walls on the same project-and with the same great Cobblestone texture look-is a major benefit of the Redi-Rock system. There's no need to mix and match between different wall systems; Redi-Rock can do it all!

In total, the project required 165 lineal feet (50.3 meters) of Redi-Rock walls, up to 15 feet (4.6 meters) high including embedment, with some tapers down to 4 feet (1.2 meters) high. This totaled 1,750 square feet (162.5 square meters) of wall facing. Once permitting and funding were secured, the wall construction portion of this project was completed very quickly to restore access to the dam.