Once an epicenter of the industrial revolution, Troy, New York, is now known as one of Albany’s trendiest suburbs. Situated on the banks of the Hudson River, the area’s colleges and tech industry have given rise to a younger, hipper Troy. With plans to further develop the area, Peter Luizzi & Bros. Contracting purchased 11 acres of abandoned manufacturing property on Troy’s Starbuck Island in 2017. Situated in the Hudson River just south of the Green Island Bridge, Starbuck Island perfectly suited Luizzi’s vision for a resort-style community with easy access to Troy’s thriving town center.

Prior to the acquisition, Starbuck Island was home to an iron foundry from 1821-1918 and an oil terminal until 2008. Luizzi’s vision to develop the land began with an extensive effort to tackle 200 years of industrial pollution. After a lengthy cleanup of the designated brownfield site, Luizzi began planning the project’s next phase; the construction of a 1,700-feet (518-meter) long sea wall to support the new development against rising water levels and erosion.

The project team was faced with two major design challenges. First, the island’s steep shore slope had been built up over nearly 100 years with uncontrolled fill, rendering it very loose and highly variable. And secondly, the winter ice jams and high spring water levels of the Hudson River had to be considered in the wall designs. 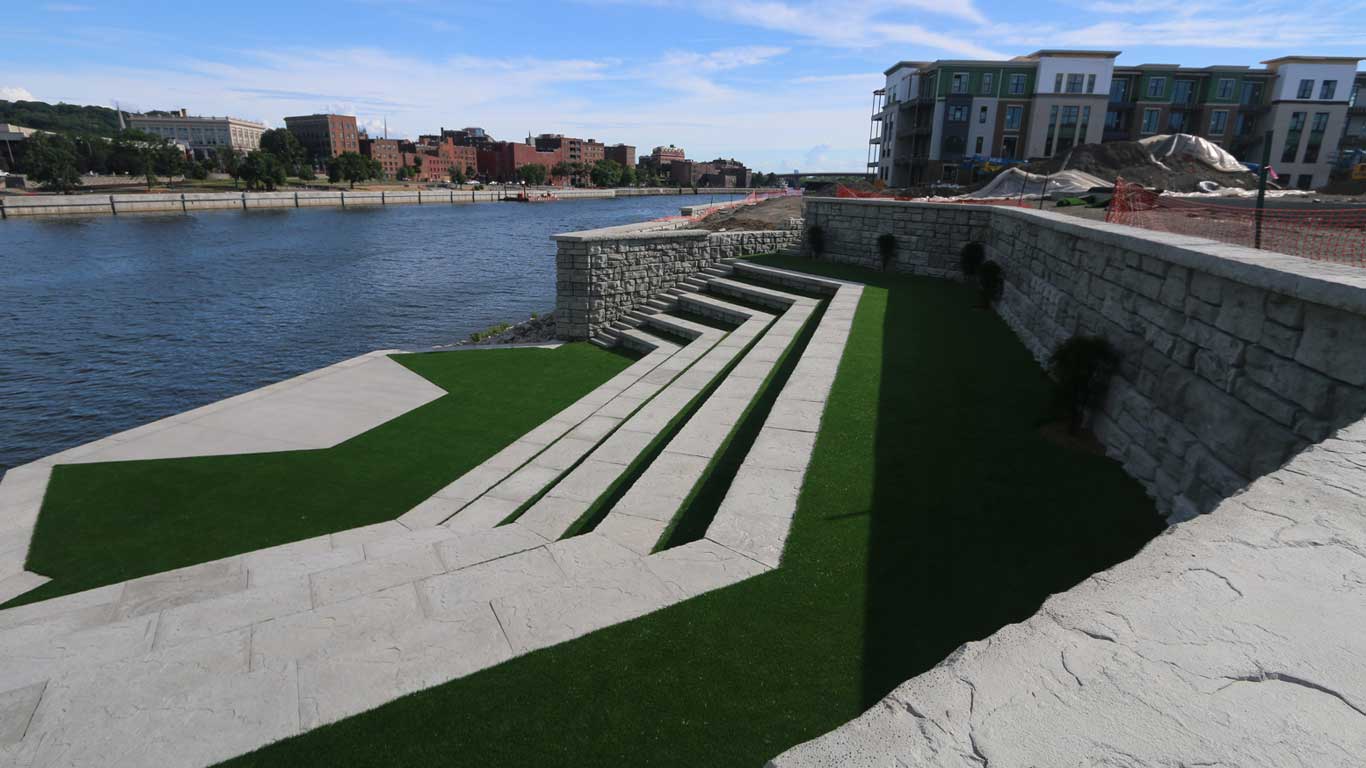 Chuck A Pafundi Jr., P.E., Luizzi’s Project Manager for the Starbuck Island project had worked with Redi-Rock on previous projects and decided that it was the ideal retaining wall solution for this application. In addition to its ability to solve both the soil and water challenges of the project, Pafundi added, “Redi-Rock was also more economical and aesthetically pleasing than the cast-in-place systems that were considered.”

James Barger, Sales Manager with supplier, Carroll Concrete/Redi-Rock Walls of New England explained, “After some initial consultation from our design engineer, it was apparent that Redi-Rock gravity walls could provide protection from the issues at hand and look good while doing it.”

Once erected, the three Redi-Rock walls would span the island’s entire east shore, supporting a marina, boat slips, walking path, and amphitheater along the Hudson riverfront. 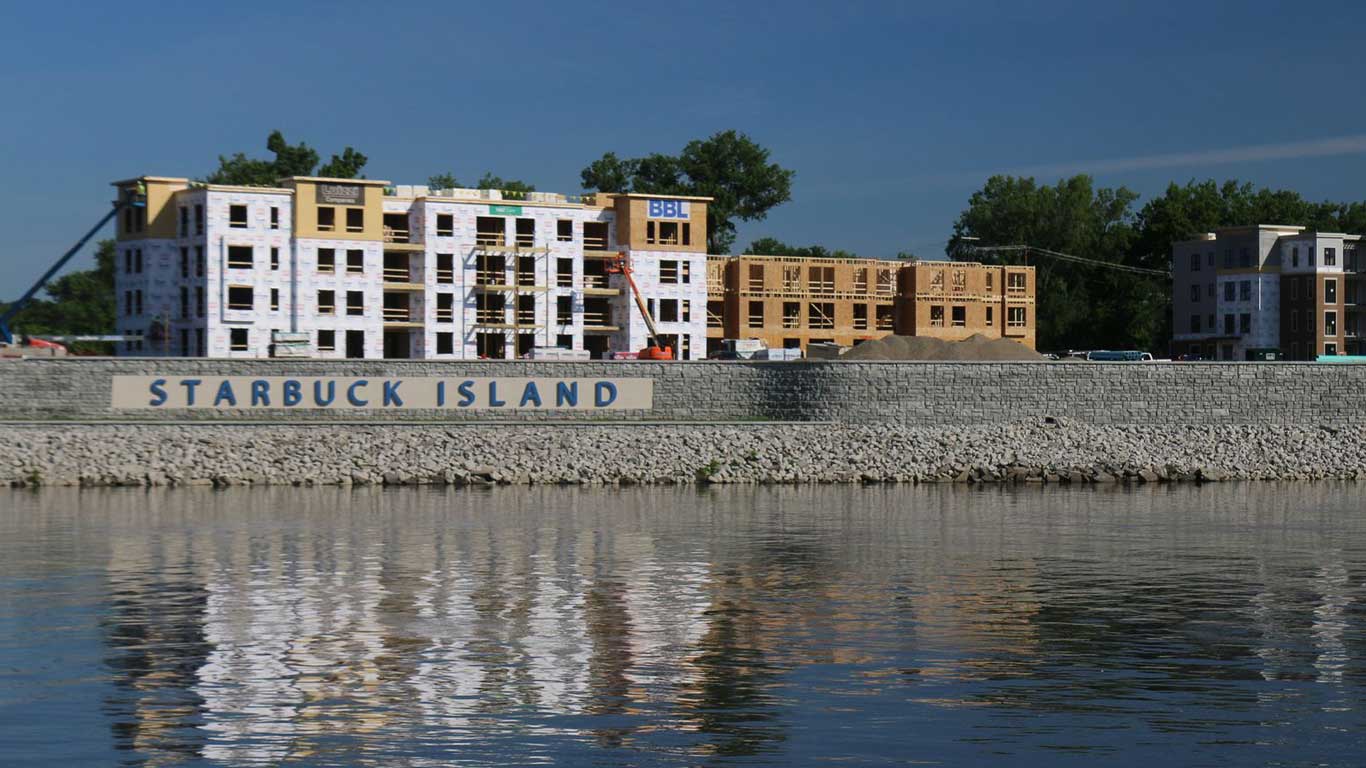 Wall designer Eric Merluzzi utilized the free Redi-Rock Wall+ Software package to design Starbuck Island’s gravity sea walls. His designs contained Redi-Rock 28, 41, and 60in (710, 1030, and 1520mm) solid blocks, most with 1 ⅝ inch (41 mm) setbacks per course or a 5 degree batter. Redi-Rock freestanding blocks would top the walls and accommodate a railing along the wall-top walkway.

Merluzzi explained, “To address the global stability and soil bearing capacity issues, the design team decided to support the walls on timber piles and reinforced concrete pile caps.” The design incorporated a planting bed at the base of the main wall to allow for aesthetic plantings, and utilized a shorter Redi-Rock wall and riprap revetment to provide scour protection for the planting area, as well as for the main wall.

Barger noted, “Redi-Rock Ledgestone texture was chosen for the project, along with a custom section of blocks for the ‘Starbuck Island’ signage area, which was to be a prominent feature in the wall.”

Pafundi explained, “Redi-Rock was ideal for a winter installation and could be installed quickly as we were working against ice damming on the Hudson River.”

A crew of 2-3 using an excavator with a block picking attachment installed between 150-200 Redi-Rock blocks per day. After three months, 1600 linear feet (490 meters) of concrete footing, and over 3,200 Redi-Rock blocks, the retaining walls had fortified the island against erosion and prepared the land for further development. 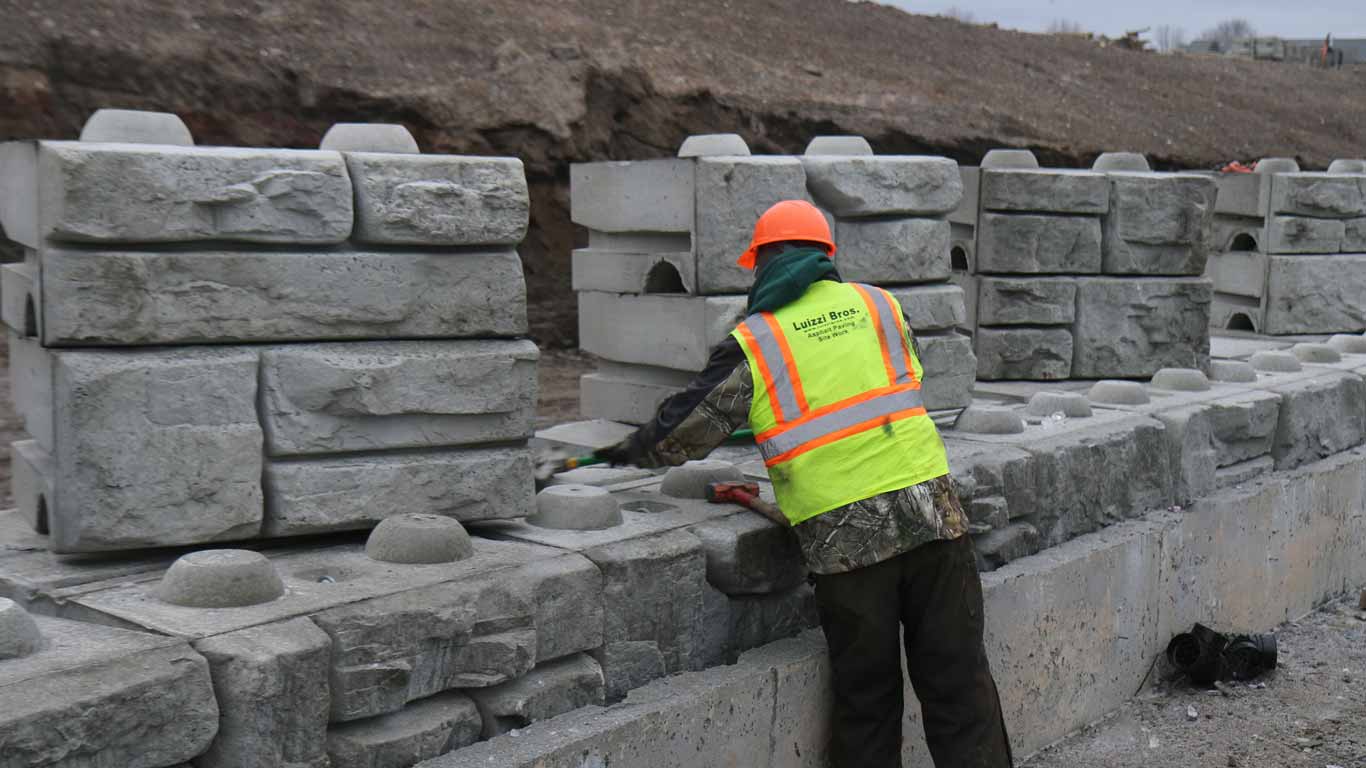 The $65 million mixed-use development featuring luxury apartments, riverside dining, retail shops, outdoor pools and an amphitheater opened in Spring of 2021. Residents and visitors to Troy, New York, now have further reason to take pride in the modernization and beautification of their community. The Redi-Rock walls were termed a “stunning addition to the site” by Pafundi.

Merluzzi attributed the success of the project to the dynamic of the entire team. “We had good site information and a good geotechnical engineer,” said Merluzzi. “Everyone worked well together on this big job so from a wall design standpoint, it wasn’t that complicated.”

PRODUCTS FEATURED IN THIS CASE STUDY: