On July 3, 2011, a storm poured 5-6 inches (0.15 meters) of rain into Coal Creek in Plymouth, Pennsylvania, causing massive flooding that blocked bridges, destroyed streets, tore homes from their foundations, and displaced hundreds of residents.

"The flooding at this site happened because two bridges upstream became blocked and the water overtopped the bridges. It was a freak local storm; it wasn't even one of the major storms that hit the East Coast," explained Joe Rutkoski, engineering technician with the USDA Natural Resources Conservation Service.

"It was like a tidal wave went through there," homeowner Al Ottensman told the local newspaper. "We found a woman pinned against her garage. A car was on its roof, homes were off their foundations, and the road was gone."

The damage, estimated around $5 million, fell well short of the threshold required for federal aid. So federal, state, and county officials worked together to obtain upwards of $1 million in public and private funds to restore the Coal Creek area. The Luzerne Conservation District and the US Department of Agriculture were particularly involved in the project.

Once funding was secure, officials were challenged to find a solution to reinforce the creek banks. The solution needed to stand up to flooding, have the ability to be built within a tight footprint, and be aesthetically pleasing to fit in this residential setting.

"Everything needed to be close to vertical to keep the channel from taking up too much space in the residential yards. There really was no way to fit natural stone or rip rap in the space available. We knew we needed some type of manufactured stone block," explained Rutkoski. 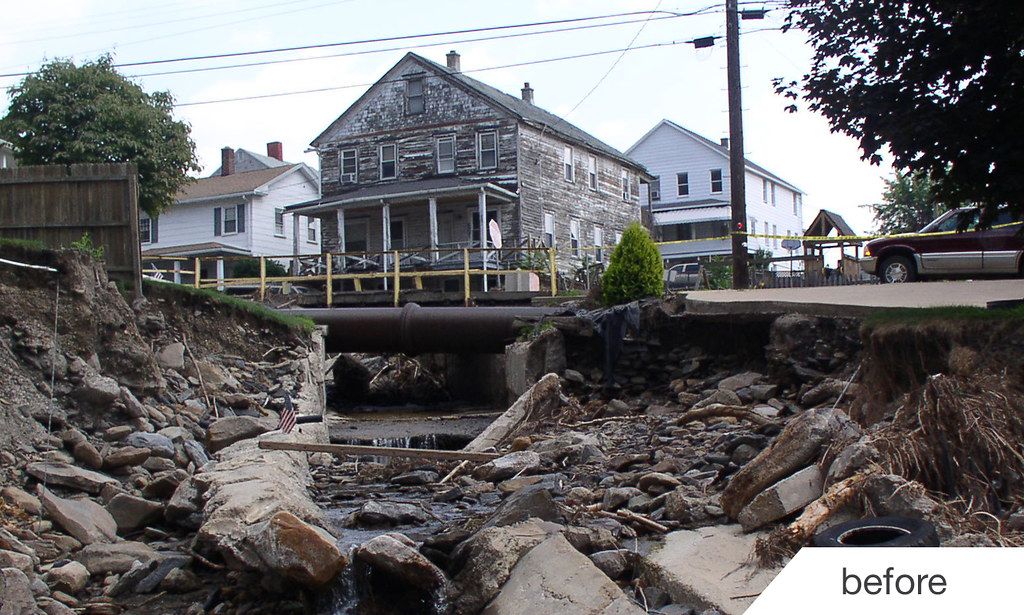 With those criteria in mind, officials turned to Redi-Rock from local manufacturer Smith Wilbert Inc.

"Redi-Rock just made really good sense for this situation," explained Michael W. Derr, P.E. and Project Engineer for Geo-Technology Associates, Inc. "Two of the houses have driveways within 2-3 feet (0.6-0.9 meters) of the top of the wall, and other houses were within 20-25 feet (6.0-7.6 meters) of the wall. Obviously you can't have significant excavation back for geogrid. There were significant excavation limits."

The massive size of each one-ton Redi-Rock block harnesses the power of gravity, making it possible to build tall gravity walls without reinforcement in many applications. This reduces excavation and allows walls to be built in tight spaces. A gravity solution was key for this project because designers needed to minimize encroachment on homeowner's properties. Redi-Rock blocks utilize a knob and groove technology, which means that the entire retaining wall structure is interlocked. Each block is manufactured using architectural-grade precast concrete, ensuring walls will stand up to the elements.

The design of this restoration project required a total of 3 walls equaling about 8,050 square feet (747.9 square meters) of retaining walls in the Cobblestone texture. At the tallest point, these walls stood 13.5 feet (4.1 meters) tall including embedment. The design included Redi-Rock 60in (1520mm) Base Blocks to add stability to the base of the walls. These 60in (1520mm) blocks weigh 3297 pounds (1495 kilograms), as much as a Chevy Corvette. Some sections included up to six courses of 60in Base Blocks. Above these, Redi-Rock 41in (1030mm) blocks were installed. 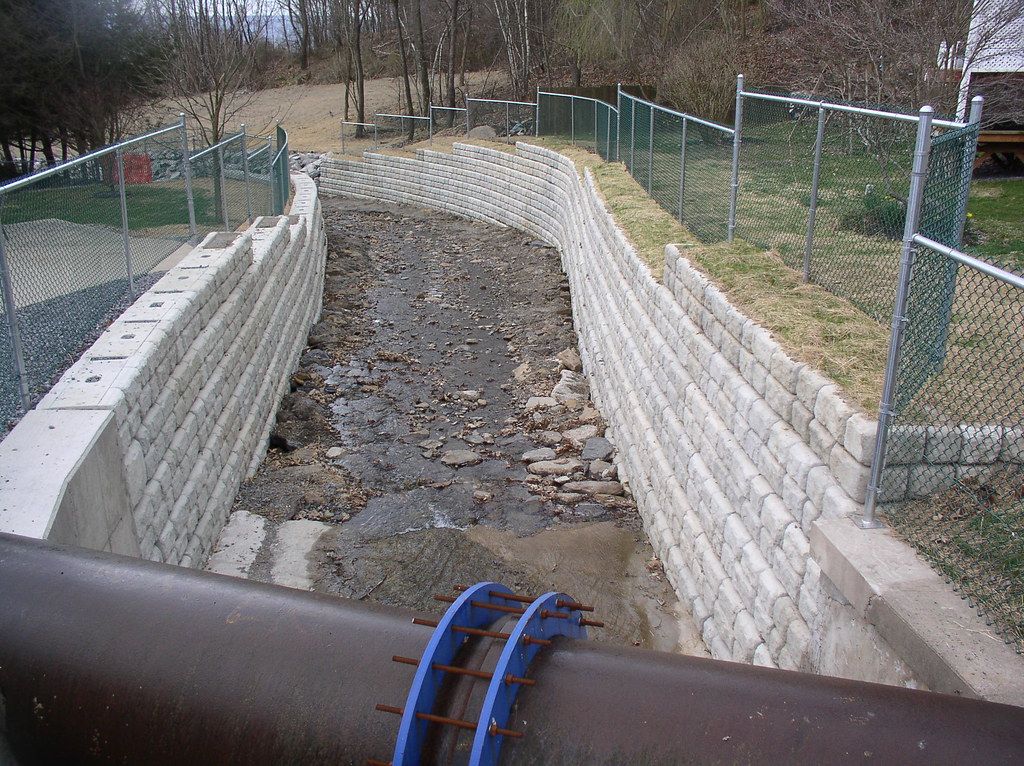 Redi-Rock can be installed in tight spaces - a necessity on this project because two properties were within 2-3 feet (0.6 - 0.9 meters) from the top of the wall.

After construction was completed, the design team was happy with the outcome. "It's just a proven system. Everything came out exactly as advertised and we'd be happy to use the product again," Rutkoski said.

The walls were put to the test in a large storm event in the summer of 2013. Plymouth Borough Mayor Dorothy Petrosky praised the walls' successful defense against "mother nature's fury. The results are amazing," she said.

Plymouth Township Supervisor Gail Conrad added: "I don't have a doubt in my mind that without this, the Coal Creek area would have had very serious problems today." 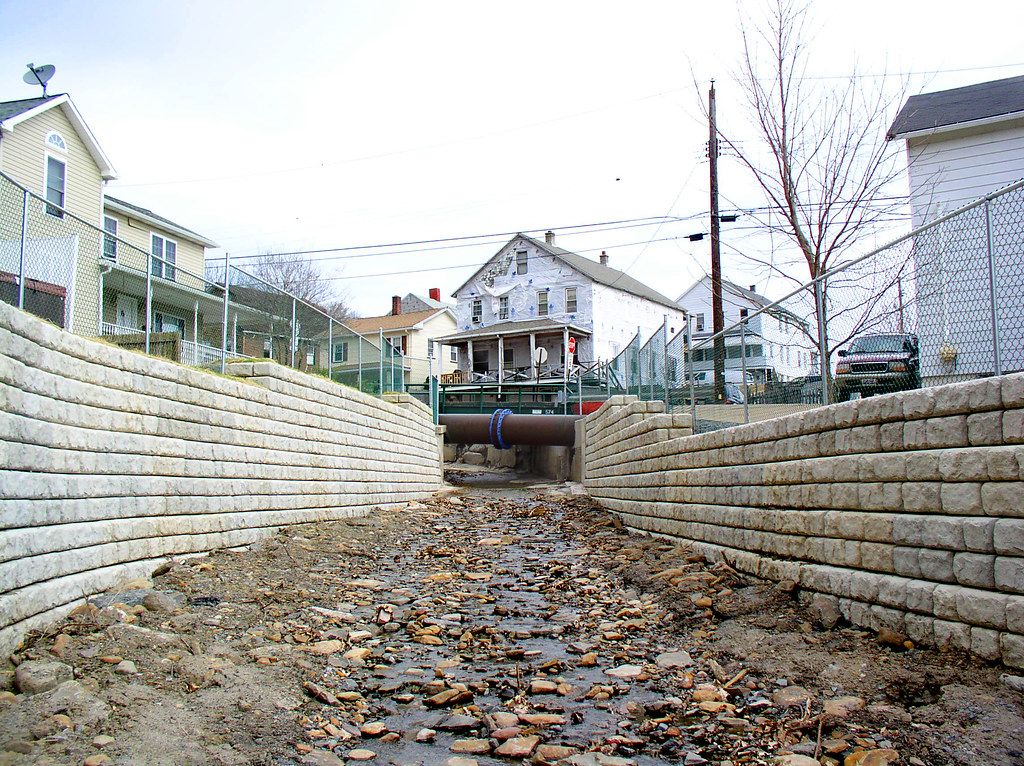 Citizens and town officials were very pleased with the outcome of this project, which looks great in the Cobblestone block texture.