Karen Enns, the health and physical education specialist at Our Lady of Sorrows Catholic Elementary School in Toronto for the last 14 years, was well aware of the disrepair the field adjacent to the school had fallen.

"When I'd come out [to the field] to do, let's say a soccer lesson or an ultimate frisbee game, I would always have to put cones where the ground was uneven so that the students didn't run and twist an ankle," she said.

Not only was the field full of potholes and lacking grass, but it also sloped significantly. From Montgomery Road to the back of the school's property by a creek, there was an 8 foot (2.5 meter) grade change.

Our Lady of Sorrows Principal Antonio Morsillo said while the need was there for an upgrade to the field for quite some time, it took about eight years to make the new field a reality in part due to funding.

"Several groups got together, one being the federal government, one being the city of Toronto, and one being the Toronto Catholic School Board. Once they came together with the funds they were able to have an architect design a new state of the art field for us," said Morsillo. 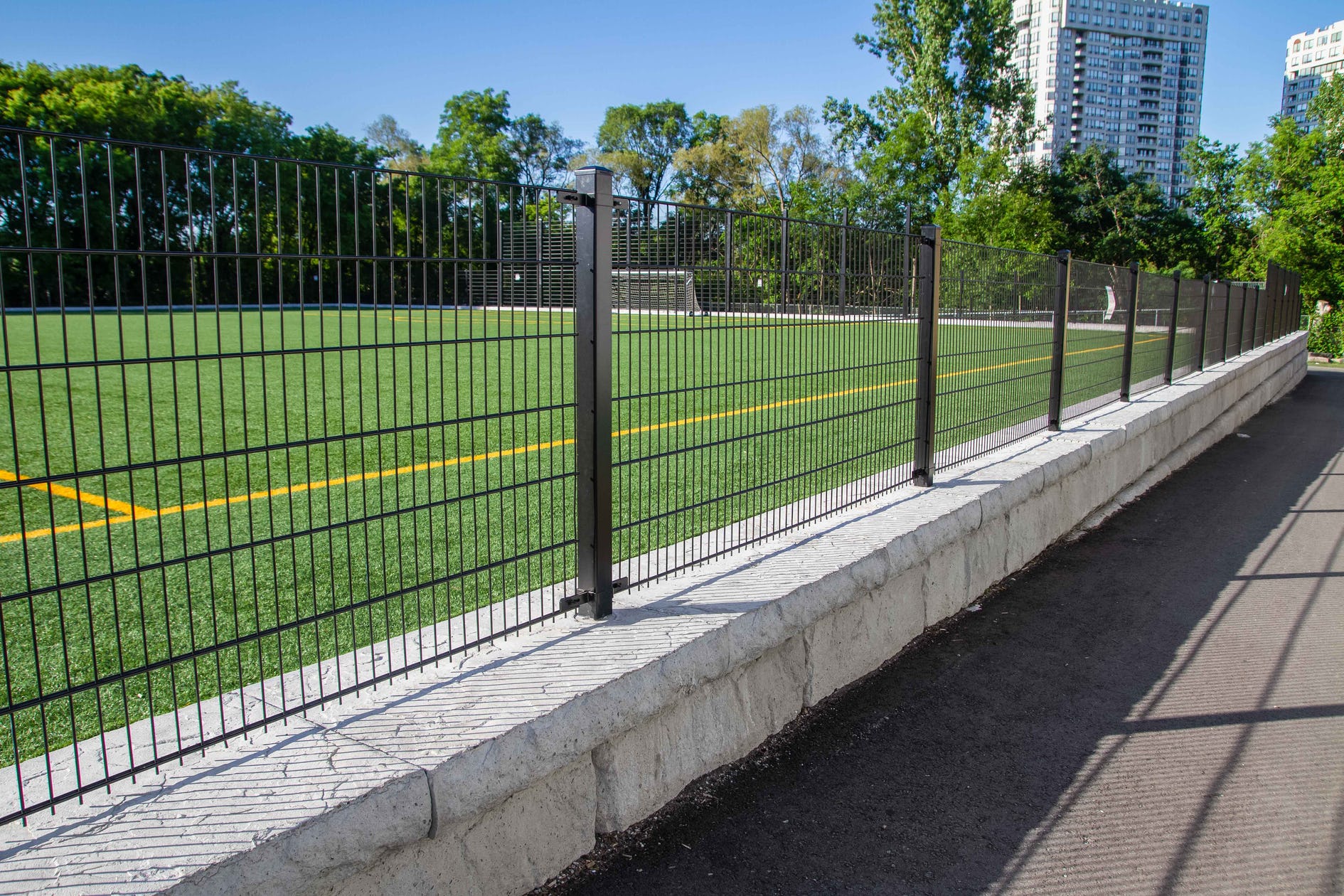 The students at Our Lady of Sorrows Catholic school in Toronto, Canada, love their new soccer field and track. The facility created with Redi-Rock precast modular blocks is a huge step up compared to their old, uneven, playing surface.

The landscape architect brought on board for the project was Zori Petrova, OALA CSLA, of SerdiKa Consulting, Inc. She wanted to use a large block retaining wall product and approached The Miller Group, the local Redi-Rock manufacturer.

Remi Bukin, the Redi-Rock marketing and sales rep for The Miller Group, took Petrova's vision for the project to their retaining wall design engineer, IRC Group, to see if Redi-Rock would be a good fit.

"It turned out to be suitable and exactly what the landscape architect was looking for," said Bukin. "What I think was appreciated with Redi-Rock was the consistency in Redi-Rock, and the fact that it could be put together like a big Lego block system and help encapsulate [the field]."

The design called for Redi-Rock blocks to create a gravity wall around the perimeter of the field, creating a level surface for the installation of a turf playing surface. On the end of the field with the grade change, freestanding blocks formed a terraced seating area and the structure for an accessible ramp. Limestone texture blocks were used for the project, creating a natural stone feel, and Redi-Rock coping and an architectural fence topped off the project for a polished look. 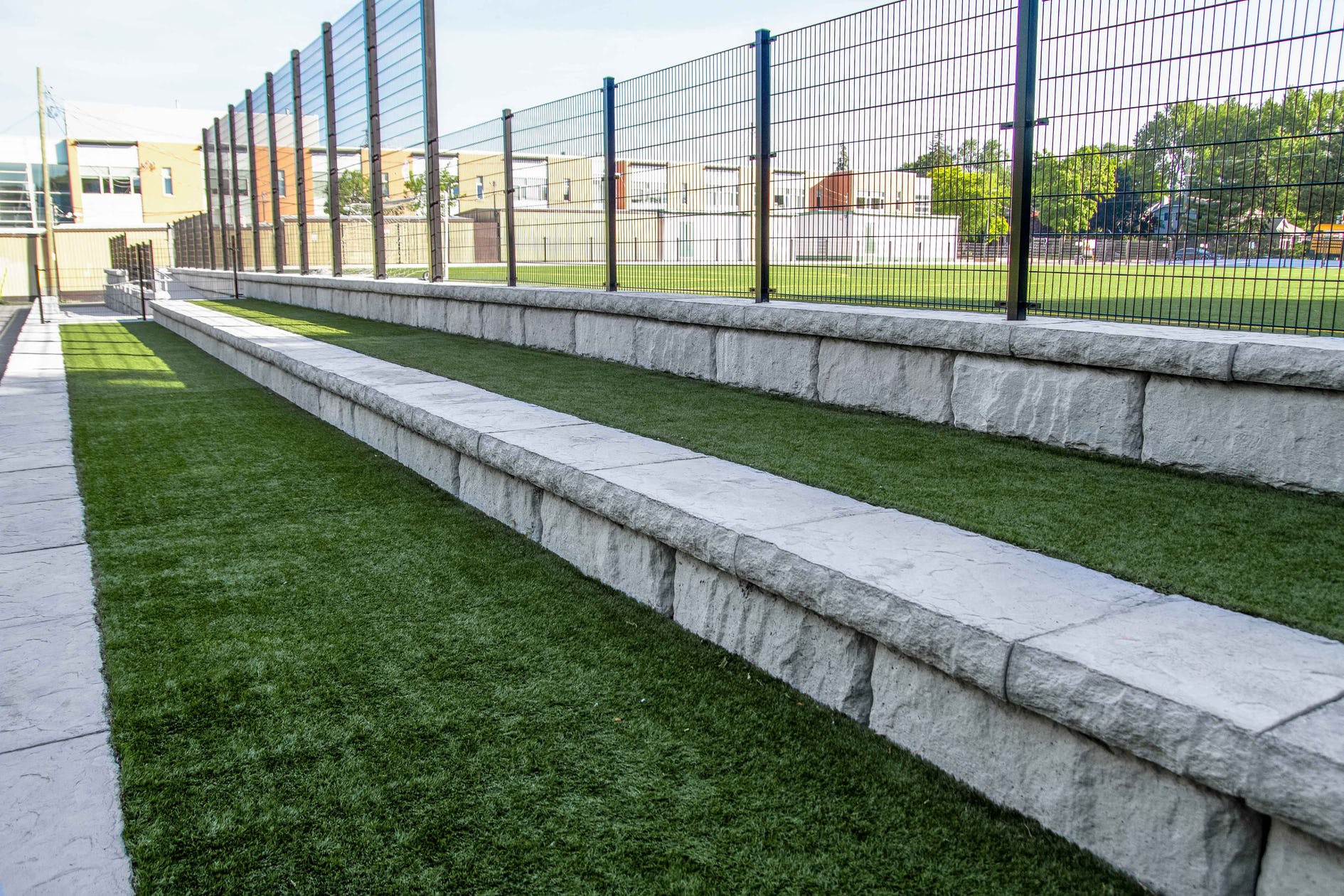 One end of the field includes a terraced seating area created with Redi-Rock freestanding blocks and caps. Kids are often found socializing here when it's not their turn to play on the field itself.

The Miller Group used two trucks a day to supply product to the construction site, where Mopal Construction built the new state-of-the-art facility.

"Mopal Construction did a fantastic job just putting everything together and putting the landscape architect's dream into real life," said Bukin. 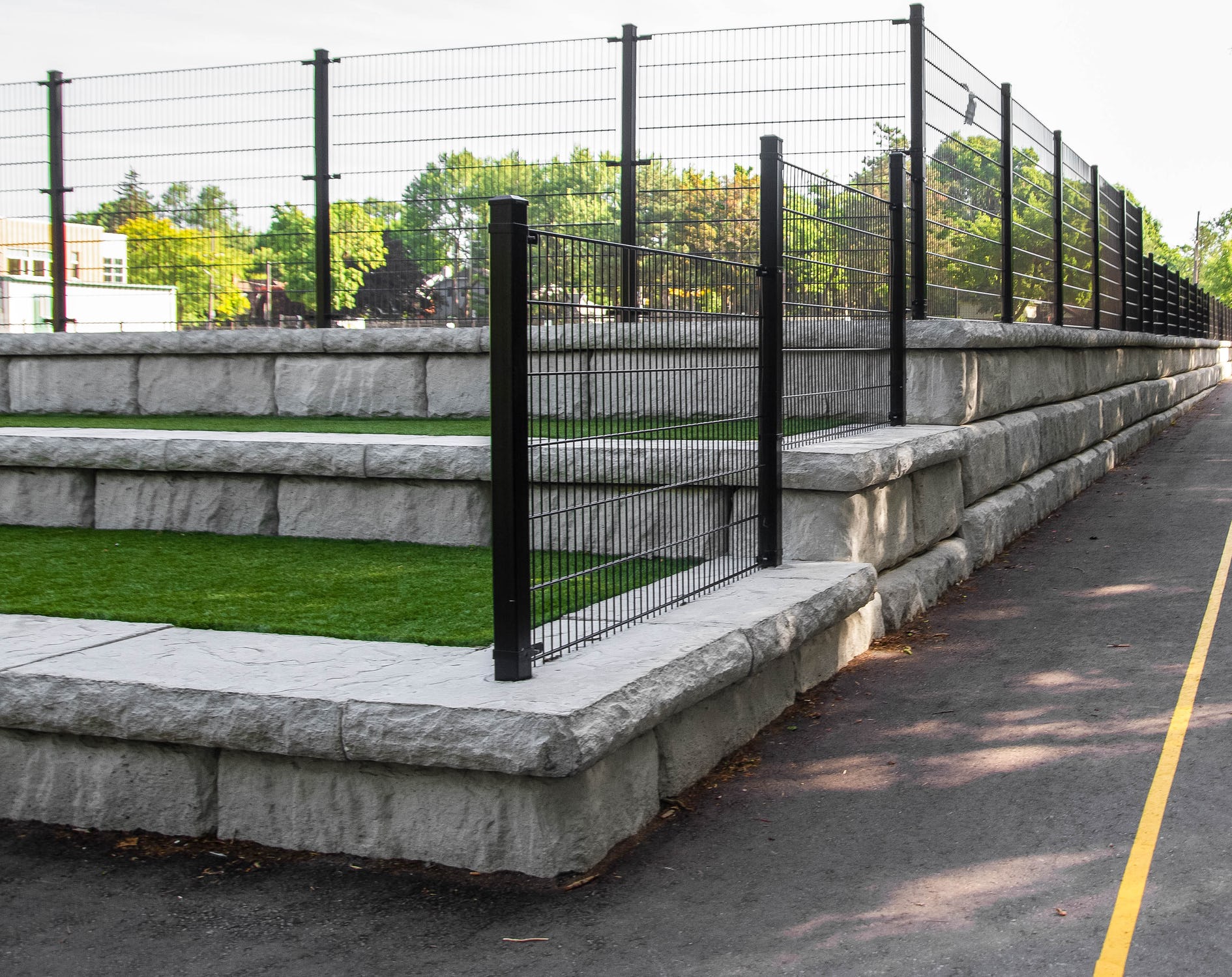 The Miller Group, the local Redi-Rock manufacturer, provided roughly 1,000 components to bring the landscape architect's vision to fruition. The Redi-Rock system, often compared to giant concrete Lego blocks, allows for the structural and aesthetic demands of projects to come to fruition.

"Personally I think the field looks fantastic," said Morsillo. "I've received nothing but accolades about how fantastic it looks. We've had community responses from parents, from other organizations that want to use the field through the permit process, and every other person who's come by has been absolutely blown away by the look of the field."

Most importantly, the kids love their new facility. They love it so much, in fact, that the school had to institute a schedule by the day of the week and grade to determine what children got to use the field during recess.

"Lately I've found the students who were having difficulty in the phys ed program maybe in the gym because of space, they just have trouble controlling some of their behaviors, here on the field they're thriving," said Enns. "It's just been so great for the school, for the programming, for everybody in the community."

As for the terraced area at one end of the field, it's had other benefits, too.

"Where we used to find students on their cell phones in the schoolyard because they were a little restless, now they're sitting there and having some nice conversation and actually enjoying each others company rather than social media and being on their phones," said Enns.

Freestanding Blocks - With texture on two or three sides, they're perfect for topping any wall or for standalone features