At the 2011 inaugural Sprint Cup race at the Kentucky Speedway, thousands of fans were stuck on the interstate for hours preventing 10,000 from even reaching the race.

Just days after the inaugural race, track owners began implementing plans to improve the flow of vehicle and pedestrian traffic accessing the track. The Speedway purchased more acreage to add 20,000 additional parking spaces on the other side of Highway 35, and the Kentucky DOT made plans to build a pedestrian tunnel under the Highway. An additional pedestrian bridge inside the Speedway grounds was another key component of the Speedway's plan for preventing a repeat traffic nightmare and improve pedestrian safety at the 2012 races.

The 2.5:1 back slope flanking the pedestrian bridge inside the Speedway presented a challenge for engineers designing wing walls. Poured-in-place concrete walls were initially considered, but economics, concerns about settlement of foundation soils, plus the tight construction schedule ruled out poured-in-place walls as a viable option.

For a solution, Speedway Motorsports turned to Redi-Rock Structures of OKI.

"We had been looking at Redi-Rock ever since we bought the track in 2008 and this year with the bridge project, we really liked the look and the constructability of it," explained Steve Swift, Construction Manager at Speedway Motorsports Inc. "So we re-analyzed it because we thought it would fit in really well with our new entrance and the tunnel. It had the aesthetic Limestone look that was very favorable and it also has the constructability that was feasible."

"The project required a near vertical face, and it was taller than what could be achieved with a gravity system because it was 21 feet (6.4 meters) at the highest point, which made the reinforced Positive Connection (PC) System the best option," said Clint Hines, P.E. of Clint Hines and Associates.

The Redi-Rock PC System combines the massive stability and beautiful cast face textures with the established performance of geogrid reinforcement through a simple and highly efficient positive connection with the Redi-Rock PC Block unit.

The segmental nature of the Redi-Rock system was also a benefit for this project. "They were concerned with settlement with the foundation soils," explained Jeff Dunlap, Senior Geotechnical Engineer at Terracon Consultants, Inc. "The segmental wall lent itself to the site because they ended up having to perform large undercuts beneath the bridge foundations to replace all the weak existing soil with granular material to improve the bearing capacity. The flexible nature of the Redi-Rock product allowed shallower partial undercuts beneath the Redi-Rock walls versus complete undercuts that would have been required for poured-in-place walls. So the flexible wall system was a definite advantage here."

The wing walls contained both reinforced and gravity wall sections. At the tallest point, the wing walls stand 21 feet (6.4 meters) tall and step down as the walls transition away from the bridge. Once the height of the wall reached 6 feet (1.8 meters), the design transitioned from a reinforced structure to a gravity structure.

The ability to use the PC System and gravity blocks in the same wall is a major benefit of the Redi-Rock product line because it allows wall designs to minimize geogrid requirements where possible, while maintaining the same aesthetic look on the face of the wall.

"They were able to turn this project around quickly; from the time it was designed to when it was installed was less than a month," explained Dunlap. The actual installation of the 3,900 square foot (362.3 square meter) wing walls took only two weeks.

"It was a lot quicker than a conventional concrete construction project. It makes it very easy to get projects completed because all our projects are on really tight time frames," Swift said.

The governor of Kentucky cut the ribbon to celebrate the grand opening of the tunnels, and officials from the Speedway are very pleased with the way the project turned out. "The walls have been met with absolutely great reviews. We've actually talked about using it on another project at one of our other 8 facilities," Swift said. 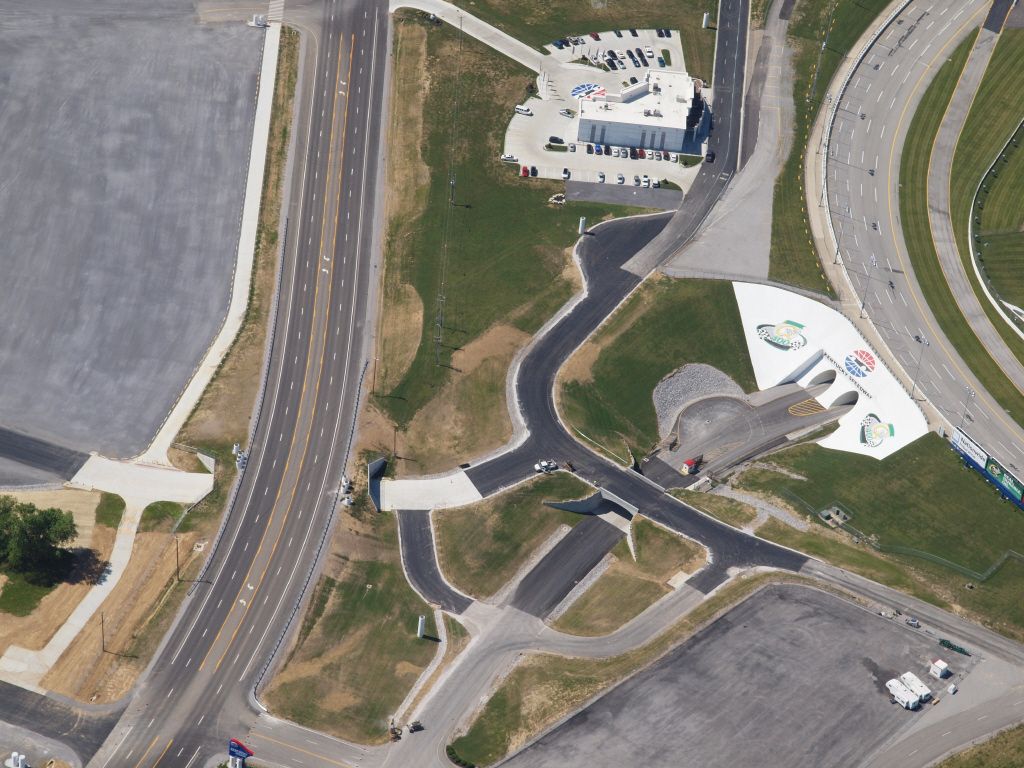