The spillway of historic Lake Shawnee Dam near Topeka, Kansas, recently received a much needed facelift with Redi-Rock retaining walls. The original spillway was built in the 1930s as a Work Project Administration project to create Lake Shawnee. The lake's outlet channel and dam were in need of major repair as the rebar of the poured-in-place concrete primary and secondary spillways was beginning to show.

Only one major repair project had been completed since the lake opened and years of channel erosion had exposed the main spillway footing.

"...if not repaired, the large spillway retaining wall could be undermined and complete failure of the spillway wall could occur, leading to an emergency unsafe situation," Kansas water structures engineer Joe D. File told the Topeka Capital-Journal in 2004.

Professional Engineering Consultants, P.A. (PEC) was chosen to provide civil engineering design services for this project. Along with FEMA, the State of Kansas and Shawnee County provided the necessary funds for the renovation work. The County looked to local Redi-Rock producer Midwest Concrete Materials to provide retaining walls to complete the restoration. 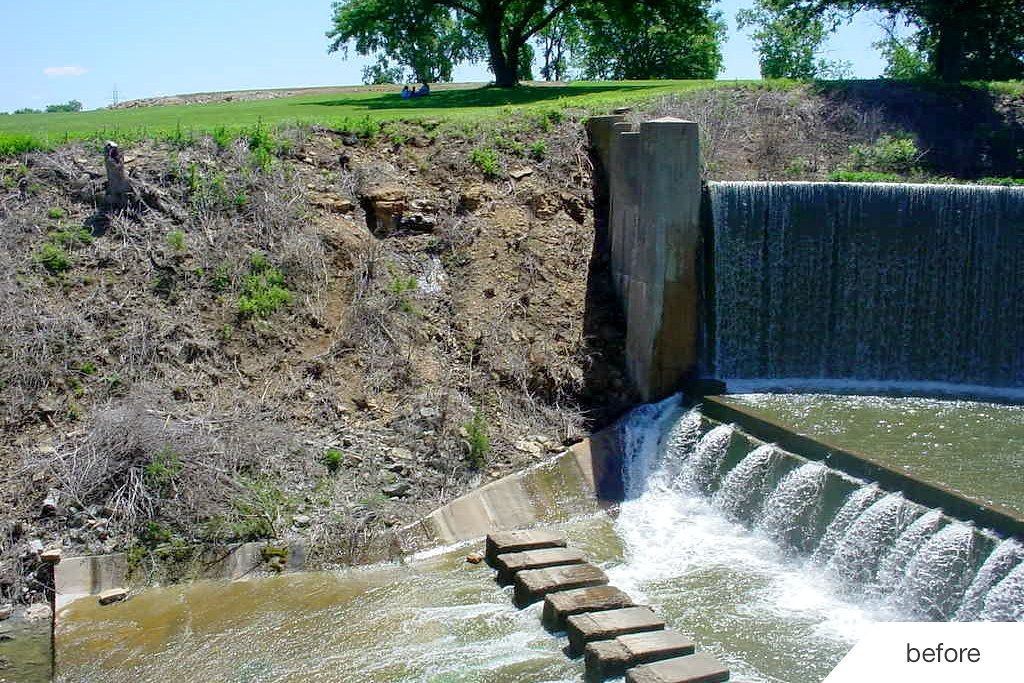 Repairs were long overdue on this eroding spillway in Shawnee County, Kansas.

The county chose Redi-Rock due to the product's ability to build walls that minimize the need for geogrid reinforcement while withstanding the constant forces of moving water. Since the dam is a landmark, the county also sought a product that could achieve an aesthetically pleasing look, which was possible with the Redi-Rock Limestone textured blocks. Redi-Rock's massive block size minimized excavation around the dam, allowing construction to progress quickly without creating additional erosion problems.

Due to space and soil limitations, engineers needed to minimize excavation behind the Redi-Rock wall. Engineers decided to utilize a "concrete backfill" design that minimized excavation while still creating a reinforced wall that provided adequate sliding and overturning resistance. A rebar cage was constructed and tied into the Redi-Rock blocks' lifting eye. Concrete was then poured, creating a solid unit in the bottom portion of the wall. This allowed engineers to design the upper half of the wall with minimal lengths of geogrid behind the Redi-Rock units, thus eliminating the need for the 20 foot (6.1 meter) lengths of geogrid required for a normal modular wall.

"The most notable change [in the spillway design] was the construction of observation areas on the downstream side of the main spillway. During large rainfall events, the resulting waterfall over the spillway attracted many spectators. Steep banks and slippery conditions created a safety risk for the County Parks and Recreation Department. PEC engineers worked with the County to provide a safe viewing area and to mitigate erosion at the spillway," said S. Earl Tast, P.E. of Professional Engineering Consultants, P.A. "We knew the observation areas would be a gathering point and wanted an aesthetically pleasing look to fit the site." 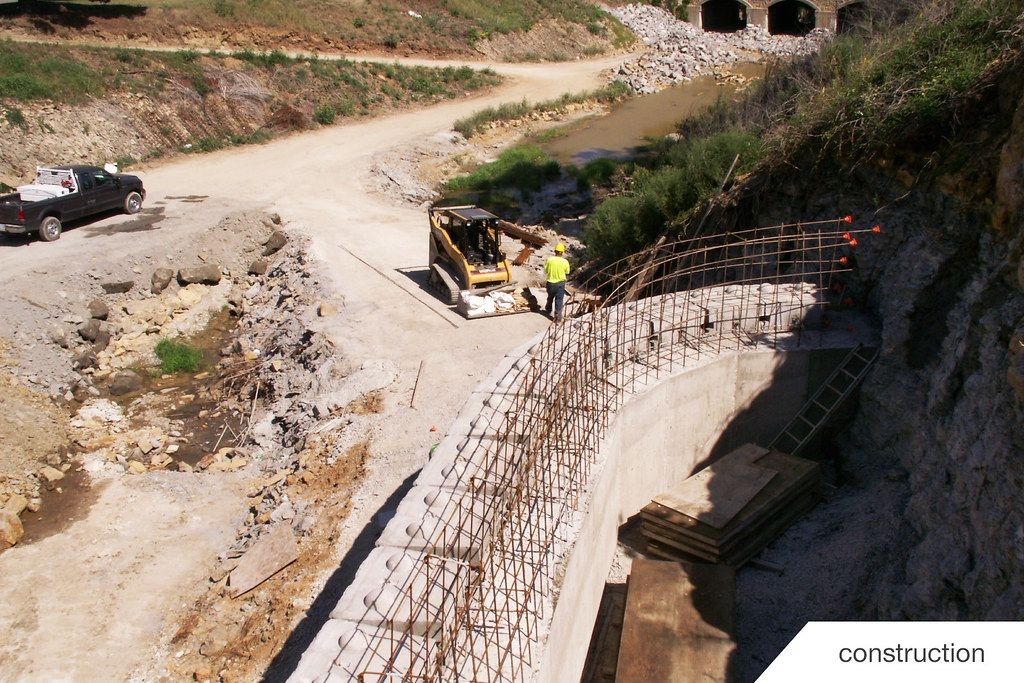 A rebar cage was constructed behind the Redi-Rock blocks and then concrete was poured to create a solid unit in the walls' bottom portion. This allowed the upper half of the wall to be designed with minimal geogrid reinforcement.

When the 8,000 square feet (743.2 square meters) Redi-Rock wing walls were completed, they were capped with a concrete platform. Redi-Rock columns and freestanding wall blocks were used to create matching fencing atop the 18 foot (5.5 meter) high wing walls for both aesthetics and safety. Visitors are now able to get closer to the spillway than was previously possible.

Retaining walls made up $400,000 of the $1.6 million project. Tony Emerson of Emcon Inc., the company that installed the walls, said that the response to the spillway restoration has been so positive that Emcon completed two more Redi-Rock projects around the lake shortly after the dam was completed.

In March of 2007 the dam repairs were tested when a storm event approaching the 100 year level occurred. The renovations prevented what could have been a catastrophic failure and turned it into a spectacular show. 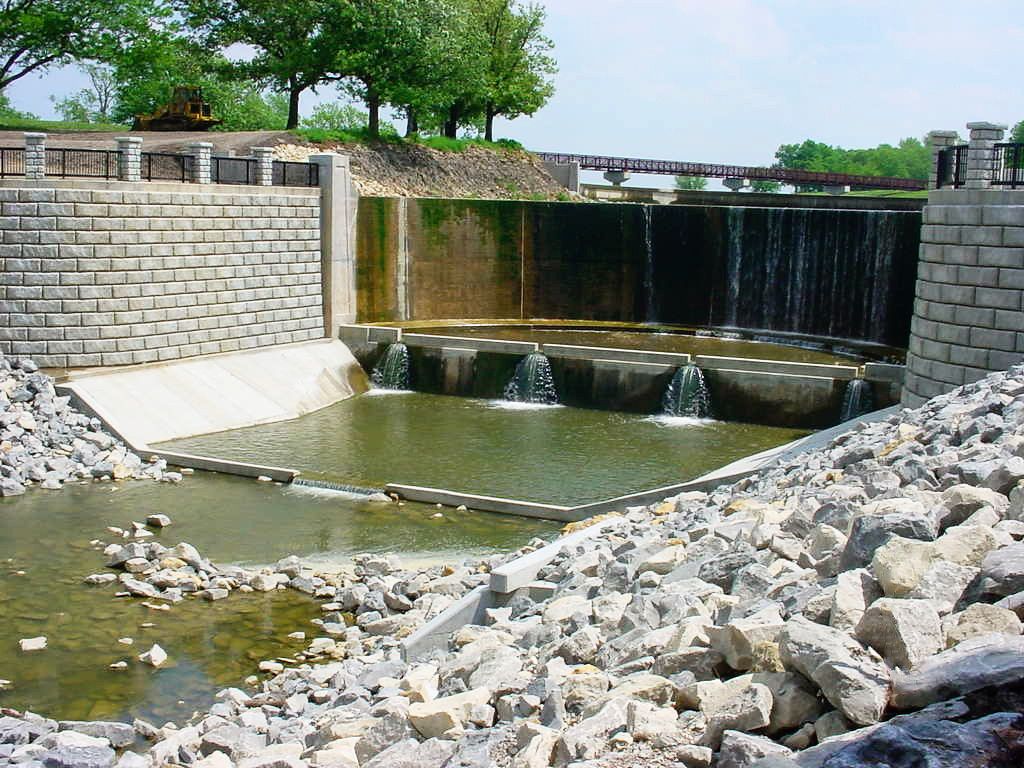 Not only does the Redi-Rock Limestone texture wall look great, it withstood the test of a near 100-year level storm less than a year after it was completed.