As construction of the abutments for the Mustla Bridge project in Estonia neared, it was recognized that insufficient space had been included on the site plan for the traffic barrier. Local Redi-Rock retaining wall manufacturer Parnu Graniit who had been subcontracted to design, supply and install the abutment walls as part of a larger road realignment project rose to the challenge to help create a custom solution.

"We could have let them redesign the road and the road barrier, but we wanted to show how flexible the Redi-Rock system can be in our hands," said Teet Rehtla, sales specialist for Parnu Graniit.

The original specification for the project along Highway 2 called for mechanically stabilized earth (MSE) panel walls, but Parnu Graniit was able to offer a lower bid cost with Redi-Rock Positive Connection (PC) blocks. As the first bridge abutment project in Europe using PC blocks, the project was already technically challenging - the two walls stretch 90 meters (295 feet), and the near vertical walls would reach 4.16 meters (13.7 feet) tall.

In shifting the road barrier back by 1 meter (3 feet), the technical demands of the project increased. Realignment of the wall to create additional space for the traffic barrier meant that only 350 millimeters (14 inches) of space would remain between the front face of the top course of blocks and the two load bearing support columns for the bridge along the north wall. Standard PC blocks are 710 mm (28 inches) wide, so a creative solution was necessary.

Rehtla leaned heavily on Redi-Rock's support system including European technical manager Liam Donohoe to ensure they executed the first project of this stature in Europe to perfection. While it was the first project of its kind in Europe, PC blocks have been used for countless bridge and road projects in North America since the product launched in 2011.

"Redi-Rock is a simple idea, but when it gets complicated, we can adjust it to work around a problem," said Donohoe.

Donohoe helped with the initial concept for the project and then connected Rehtla to Geoman Ltd., a geotechnical engineering firm with locations in Northern Ireland and Spain to dive into the specifics. As consulting engineers, Geoman Ltd. helped Parnu Graniit fully understand the scope of their first reinforced retaining wall project. 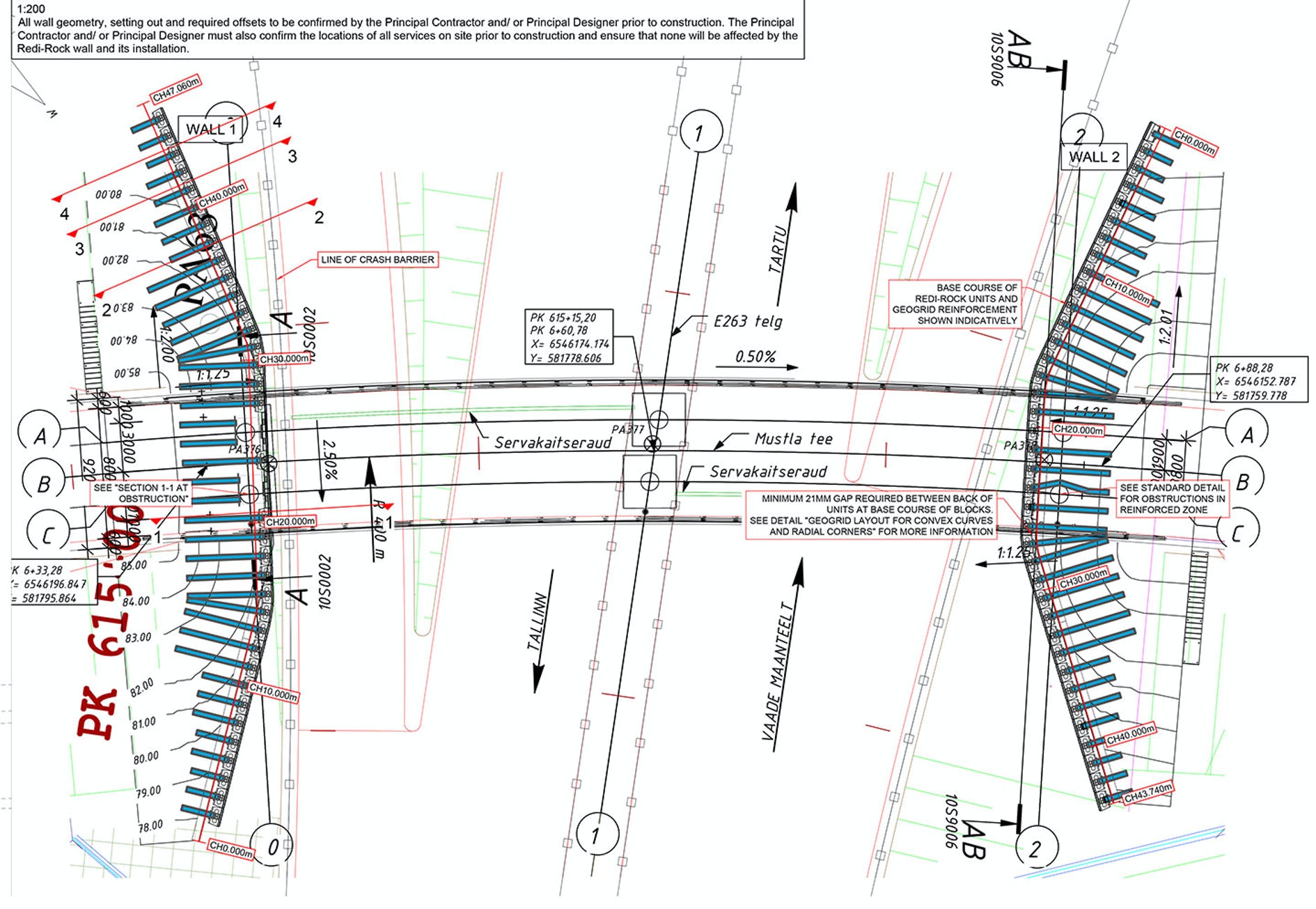 Geoman, Ltd. created detailed plans for the retaining walls as part of the Mustla Bridge project.

"Our responsibility was to ensure Parnu Graniit turned up familiar with reinforced earth systems and all of the nuances that can lead to issues further down the line," said Ken Knox, EIT, of Geoman Ltd.

One benefit of the PC system, which uses 300-millimeter (12-inch) wide strips of geogrid that wrap through a center core slot cast into the block instead of sheets of geogrid, is that it reduces the probability of errors in installation. This connection system also creates a strong, consistent facing connection that does not vary in capacity with depth, and it makes it easier to accommodate obstructions in the reinforced fill. The strips of geogrid can be splayed up to 15 degrees without compromising the performance of the reinforcement.

Knox utilized Redi-Rock Wall+ Software (RRWall+) to carry out his checks on the design of the wall. The program includes a database of Redi-Rock blocks and compatible geogrid types, including interface shear and connection parameters, for streamlined setup of the stability calculations.

"Every check includes a detailed breakdown of the force vectors which made interpretation of the analysis output straightforward," said Knox. "For checks on the global stability the program exports the analysis directly to the specialized slope stability module, which offers greater flexibility for defining complex strata and groundwater profiles where most needed."

Knox chose to use Redi-Rock Pro software because of: 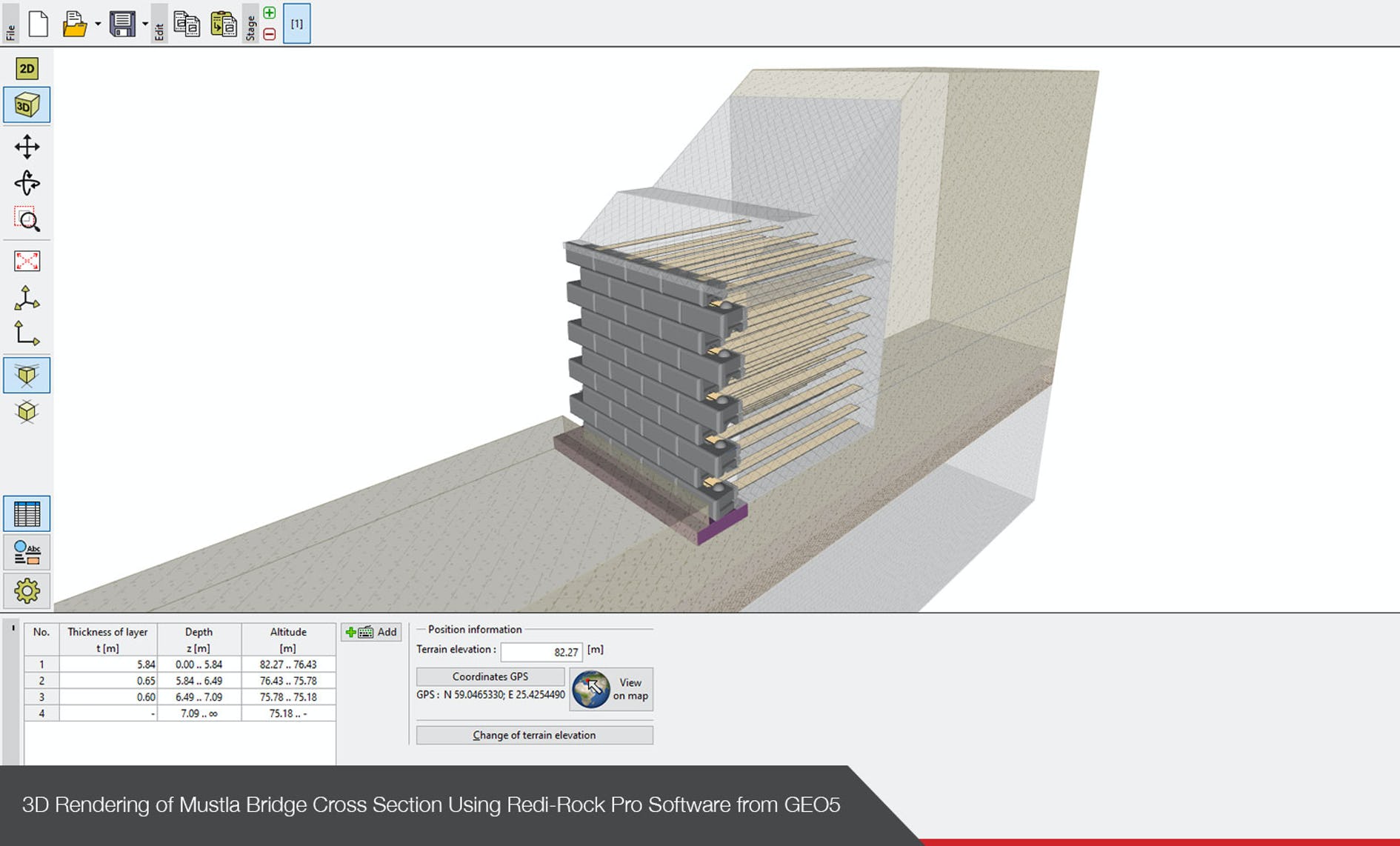 Redi-Rock Wall+ Software allows cross-sections to be analyzed for all modes of failure, and the 3D rendering also makes it easy to visualize retaining walls taking shape.

Knox, Rehtla, and Donohoe also worked closely together to overcome the issue with the traffic barrier and reduced space for the wall.

"The Redi-Rock system is already quite flexible in terms of dealing with obstructions in the backfill," said Knox. "You can usually for small obstructions just splay the grid around it. There's also another standard detail for large obstructions where you use a waler beam along the back of the blocks, but neither of those worked well for this particular case because of the limited space."

With both of the standard options off of the table, they created a plan to reduce the width of the blocks where they conflicted with the bridge columns. Parnu Graniit would create custom block faces about 300-millimeters (12-inches) thick with rebar that protruded from the back of the blocks. The rebar would be utilized to bolt the blocks together with steel channels, as well as thread behind the columns into a system of galvanized steel pipes for the geogrid to wrap around. 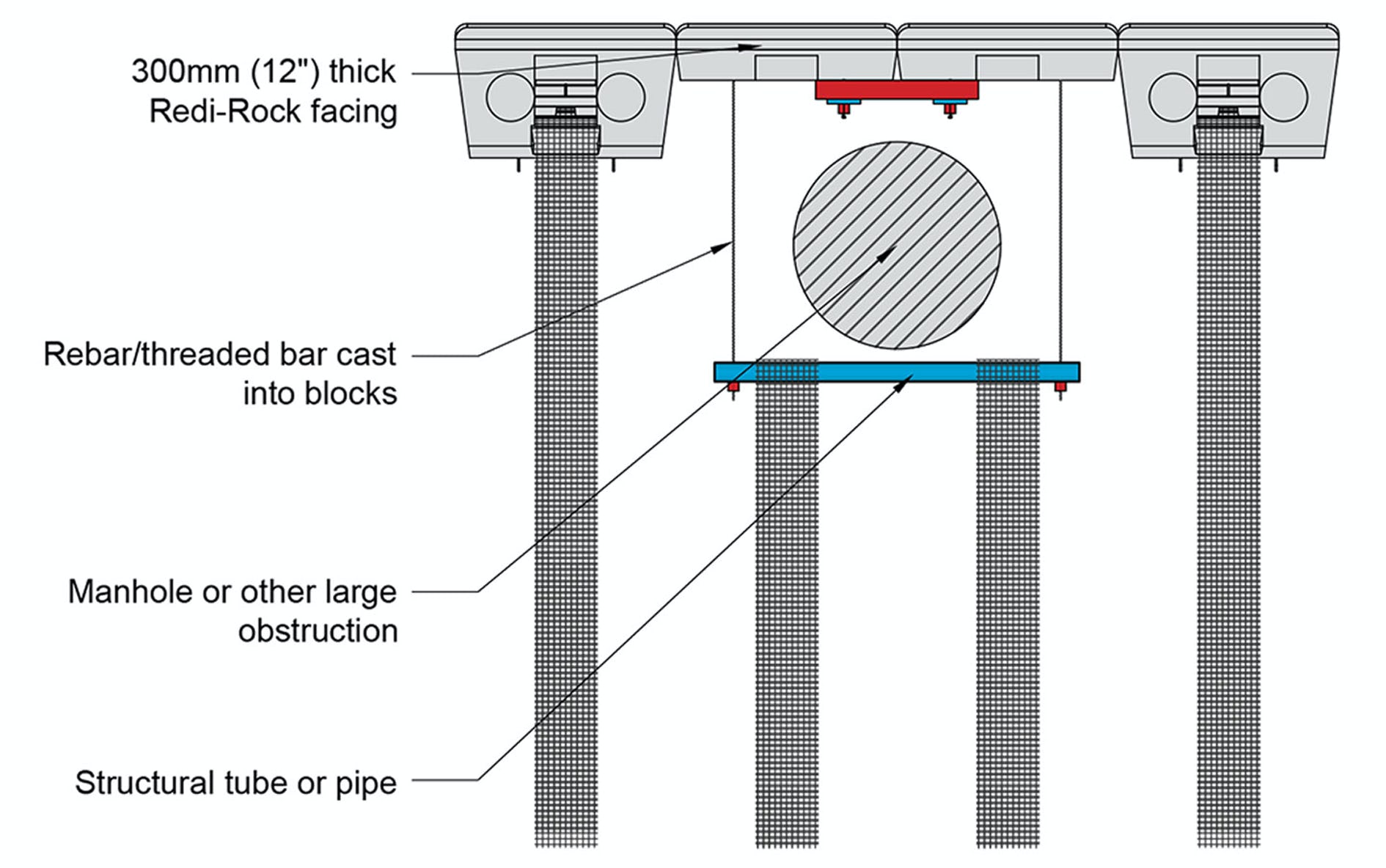 The custom solution created by Parnu Graniit, Geoman, and Redi-Rock created space in front of the wall for the road barrier, while not interfering with the bridge support columns behind the wall.

One of the typical benefits of using Redi-Rock on projects is much of the product line is standard and can be inventoried, reducing lead time on projects. However for this particular project, in addition to the 40 custom reduced width blocks, Parnu Graniit needed to special cast the entire project in C30/37 XC4; XD3; XF4; KK4 - the chloride resistant concrete spec for all public sector projects in Estonia due to the high salt content used to deice roads.

Once they were awarded the project, Parnu Graniit started special casting the 605 blocks necessary for the two walls.

When it came time to start installation, Donohoe was once again on hand to help. Although it was Parnu Graniit's first time installing a PC project of this size and scope, they were able to install the wall faster than anticipated.

"For us it was a very difficult project, but we were very confident when we were constructing it because we know we had Redi-Rock support," said Rehtla. "Liam was here when we laid the first stone, so it was quite easy to do because everything was explained."

As the crew of three on the jobsite got the hang of the installation process - setting each course of blocks with a 13-ton excavator, threading strips of Tencate RR 3000 geogrid through the core slots of the PC blocks, and then backfilling and compacting before moving to the next course of blocks - they picked up speed.

During construction, additional care was taken to tie back the custom 300mm (12in) blocks prior to placing the fill directly behind the blocks. Only lightweight compaction was used near the reduced width blocks, as the interface shear and overturning stability was reduced. 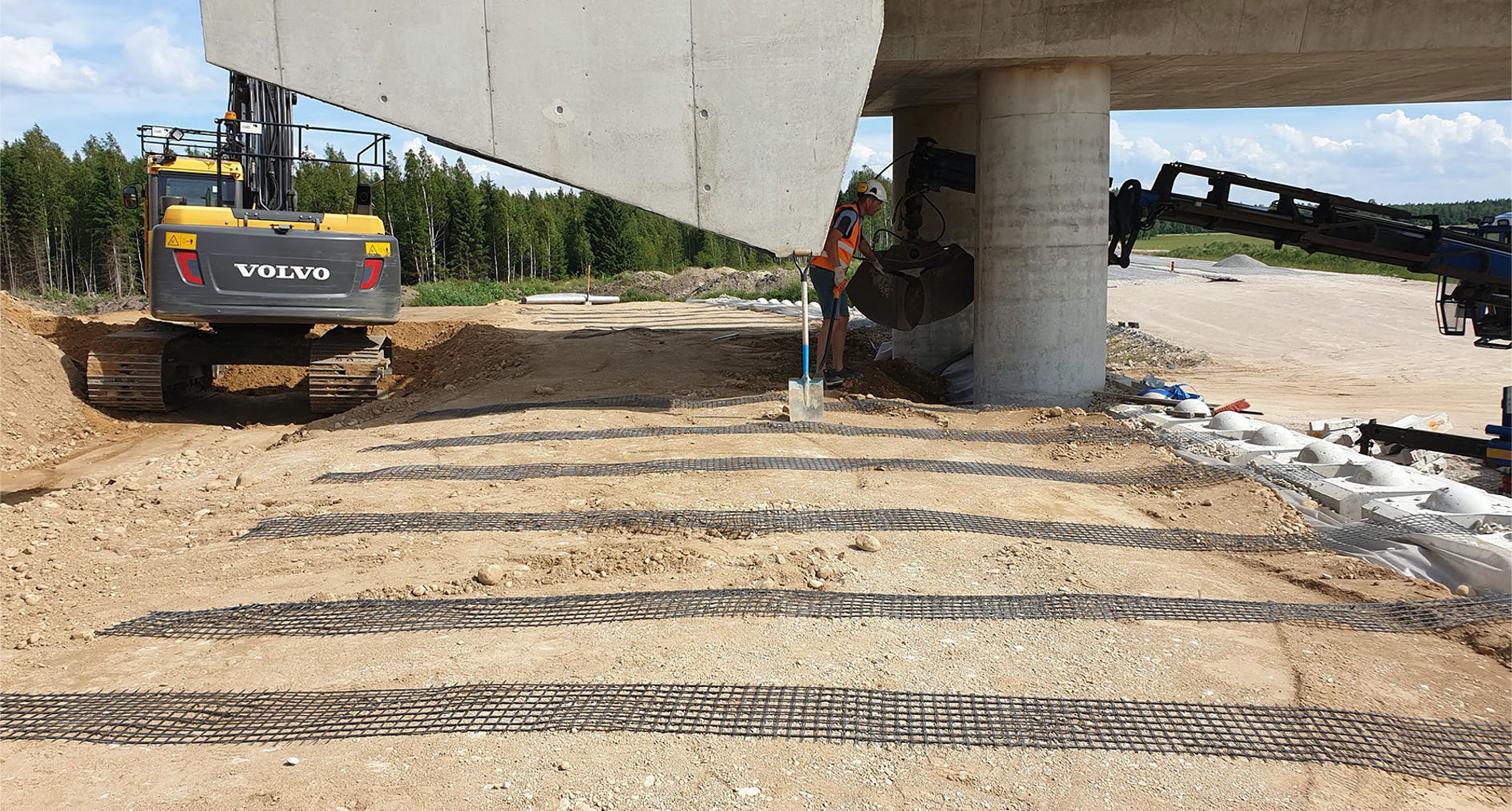 Parnu Graniit was able to recuperate time on the installation of the retaining walls utilizing the Redi-Rock Positive Connection blocks, despite being a first-time install for their crew.

Parnu Graniit exceeded expectations for the project, cutting the overall cost for the clients compared to MSE panel walls, eliminating any concern over corrosion of the reinforcement system with salty road runoff, and finishing the project ahead of schedule.

"They ended up actually recuperating four weeks on the overall project," said Donohoe.

The wall construction was completed in early June 2019, and the finished walls stand 10 courses tall with a Ledgestone textured face.

"In the end the wall needs to retain earth, but it also needs to look good," said Rehtla.