When a January 2012 landslide along a major Washington highway caused closures and damage to residential properties, the city of Bellevue needed a fast solution that would stabilize the slope and get traffic moving again.

West Lake Sammamish Parkway runs along a hill above Lake Sammamish, and several high end residences lie between the highway and the lake. Officials were unable to determine what caused a water main break during a heavy rain and ice event which resulted in a significant landslide.

"It basically washed the whole bank down into the houses and out on the beach. We spent about 2 weeks with a vacuum truck cleaning all the dirt and debris out of people's backyards. It was kind of an environmental disaster," said Torger Erickson, P.E. and Project Manager for TetraTech. 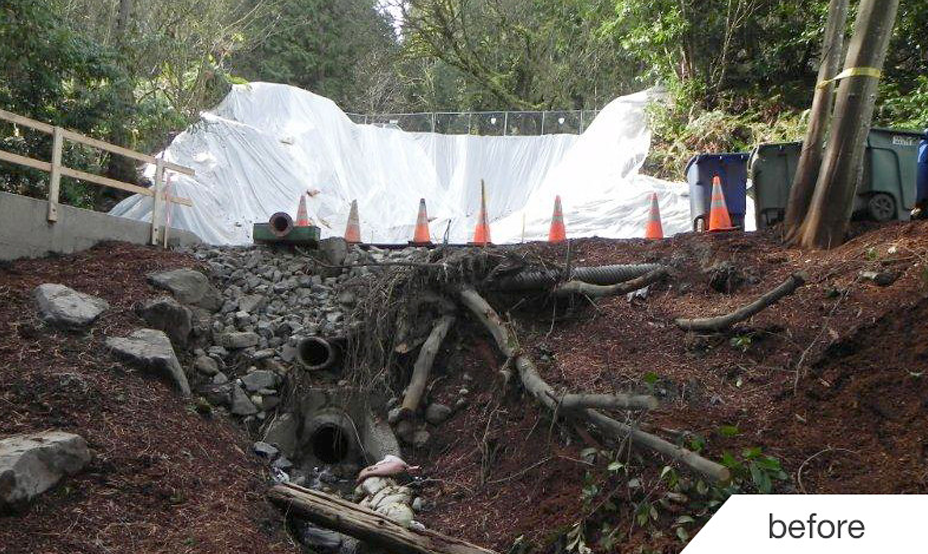 After a heavy rain and ice storm, a water main breakage caused a massive landslide which damaged residences and roadways.

Prior to the slide, the city of Bellevue had been considering Redi-Rock as an option for 3-4 phases of planned improvements along the highway. When the slide happened, engineers and city officials contacted local Redi-Rock manufacturer Puget Sound Precast within 48 hours because "repairing the slope needed to happen quickly. These blocks solved the engineering problem, they had the aesthetics the homeowners wanted, and they were easy to install," Erickson said.

"We didn't have soil conditions that would allow us to drill tiebacks or lay geogrid. Other types of retaining walls higher than 6 feet (1.8 meters) require tie backs, but we were able to achieve a 12 foot (3.7 meter) tall wall by utilizing the weight of these blocks," explained Bill Cross, Senior Construction Inspector for the city.

The project actually required two walls; the lower wall was 9 feet (2.7 meters) tall with 3 feet (.9 meters) of freestanding walls on top, and the upper wall was 12 feet (3.7 meters) tall. Both were built as gravity structures, which rely on the massive size of each block to create tall walls that require no reinforcement at all.

"We needed to avoid seepage around the pipe so we used cork sheets to make a tight seal and also allow for the retaining wall to move a bit without crushing the pipe," said Erickson. To help the pipe blend with the wall, Puget Sound Precast manufactured custom Ledgestone faces which were attached to the concrete after the wall was installed.

Engineers specified free-draining "quarry spalls" (rip rap) as backfill so that water wouldn't be held behind the walls, "so the chances of having a water problem causing a failure again are minimized," Erickson said.

In total, the solution included 2 walls and 1,365 square feet (126.8 square meters) of Redi-Rock blocks-all in the Ledgestone texture that was stained to match the natural rock tones in the area. Because the walls are located in residential backyards, aesthetics was an important consideration for this project. The Ledgestone texture gives walls the random look of natural stone, with the structural stability of an engineered system.

"This was an innovative project. It was more complicated than just building a retaining wall," Erickson added. "We used this as an opportunity to improve more than just the wall. We planted above the wall with trees and ground cover and bushes." 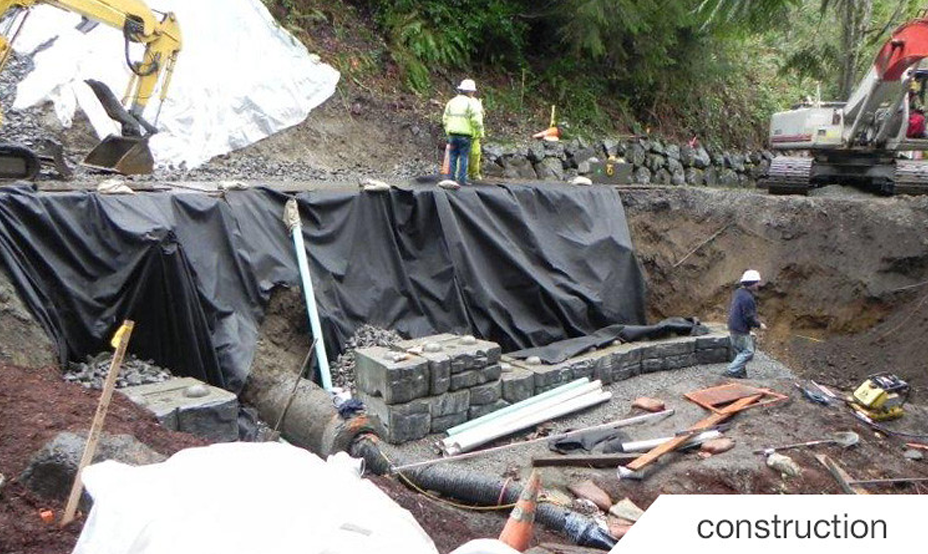 The Redi-Rock retaining wall installed in under 2 weeks.

"The construction was quick," said Doug Neal of Westwater Construction Inc. "We've done a lot of smaller block walls, but this was the first time we worked with Redi-Rock. It was like building with Legos!"

The Westwater crew staged the blocks on the main roadway above the project and moved blocks down as they needed them. "We built the wall in two stages; the lower wall took 4-5 days and the upper wall took 7-8 days," Neal said. He added: "The best thing about the system is that you don't have to lay the blocks at a batter because it's already built in. As a contractor, that makes a huge difference. You just build a level base and then pop the blocks in."

The road was open again four months after the slide occurred. Choosing Redi-Rock solved the engineering issue and allowed the City to repair the slide area as quickly as possible-plus the aesthetics kept the homeowners happy. 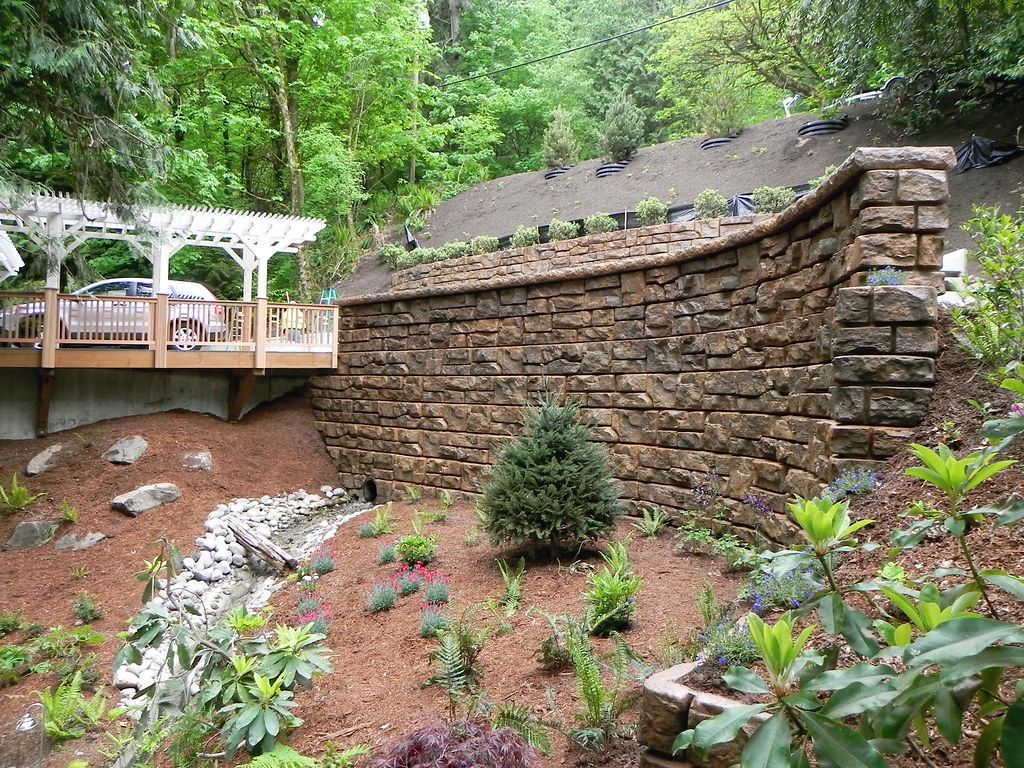 The Ledgestone texture blocks were stained to match the natural stone colors in the Bellevue area.

Freestanding Blocks - Redi-Rock Freestanding blocks are textured on both sides, giving above-grade walls an unbeatable, finished look for any project you design.

Cap Blocks - Steps, caps, and columns coordinate with Redi-Rock retaining wall products to give your project a cohesive look.