When Clermont County engineers discovered that the bridge abutments supporting the Gaynor Road Bridge were deteriorating, they were forced to close the bridge. For a year and a half, the county debated solutions for reconstructing the bridge. The county needed a structural retaining wall to act as a bridge abutment, but they also wanted the solution to be attractive.

Several factors influenced the decision the county eventually came to:

First, the new bridge abutments needed to be aesthetic, because an educational nature preserve was directly adjacent to the bridge. The nature preserve was donated to the Cincinnati Nature Center by Cincinnati native Neil McElroy, who served as Secretary of Defense under Dwight D. Eisenhower. The year McElroy died, his 535-acre farm was donated with instructions that the farm be kept as a working farm and used for "educational activities" and be "kept intact in order to preserve wooded areas, flowers, and its natural beauty." Therefore, a natural look for the bridge abutments was essential.

Second, the county was looking for a cost-effective, structural solution that would allow them to utilize their own equipment and crews to install.

Originally, the county considered using cast-in-place abutments, vertical piers, or reinforced concrete grade beams. But since construction needed to take place in the dead of winter, the county needed a solution that wouldn't require provisions for heating and curing. 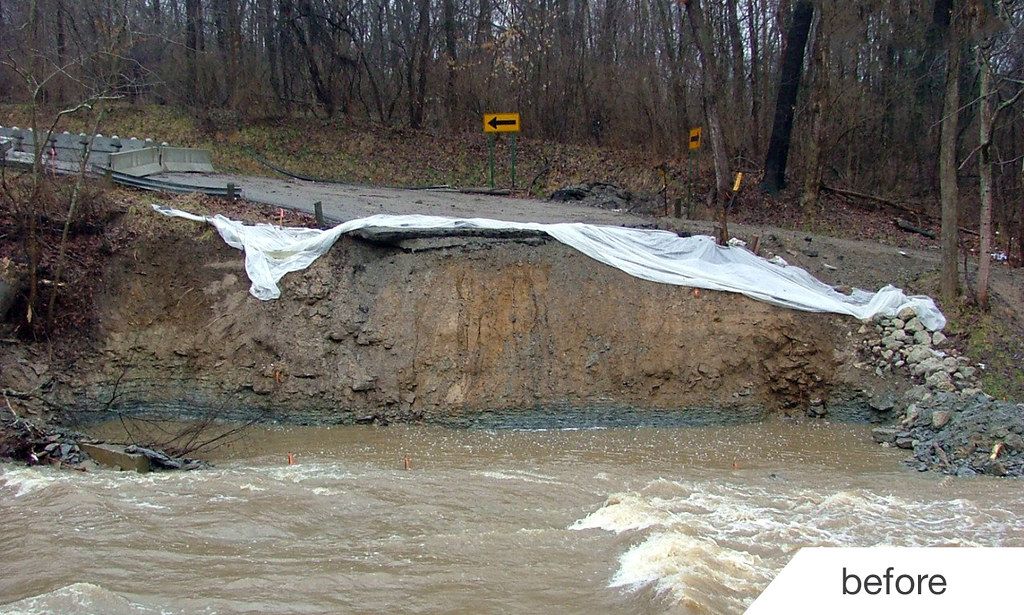 "I came up with the design using Redi-Rock because it was a winter project and we didn't want to pour monstrous abutments," Gadbury said. "Using Redi-Rock worked well in this application."

Redi-Rock's Cobblestone texture blocks are cast in molds taken from natural quarried stone. Even though each block has nearly six square feet of face, the Cobblestone texture has the appearance of six smaller blocks, giving finished walls a more natural look.

Redi-Rock's unique interlocking system installs simply, using a small crew and a piece of heavy machinery such as a backhoe. Installing the walls has a fast learning curve, which proved beneficial for the county's crew. 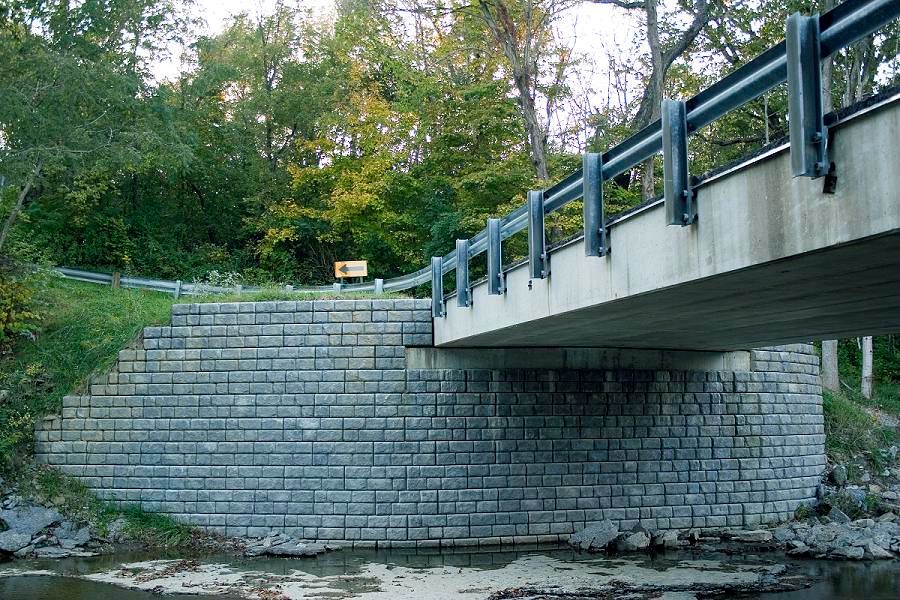 Like a giant Lego block, each Redi-Rock block interlocks with the one above and below it, creating a structural wall. Because the blocks were manufactured off-site by Redi-Rock Structures of OKI, the walls did not require provisions for heating and curing, even though they were installed in the dead of winter. For these abutments, Gadbury specified Redi-Rock 41in (1030mm) retaining wall blocks reinforced by geogrid extending behind the wall.

"Using Redi-Rock simplified construction greatly," said soil engineer Joe Kowalski, P.E. who reviewed the design for the County. "The county just built the Redi-Rock wall, put beams on it, and walked away."