Along US Route 50 in Clarksburg, West Virginia stood a decaying, unusable bus depot. This depot was located adjacent to a bridge, with access into the depot coming directly off the bridge.

In 2014, the Central West Virginia Transit Authority (CENTRA) needed to upgrade its bus depot facilities and create more space for parking. The goal for this project was to demolish the old depot, then create a new retaining wall to expand the parking area for the new depot. The challenge was that the new wall needed to be constructed within 15 feet (4.7 meters) of the highway, and the design needed to create access from the bridge into the parking area. 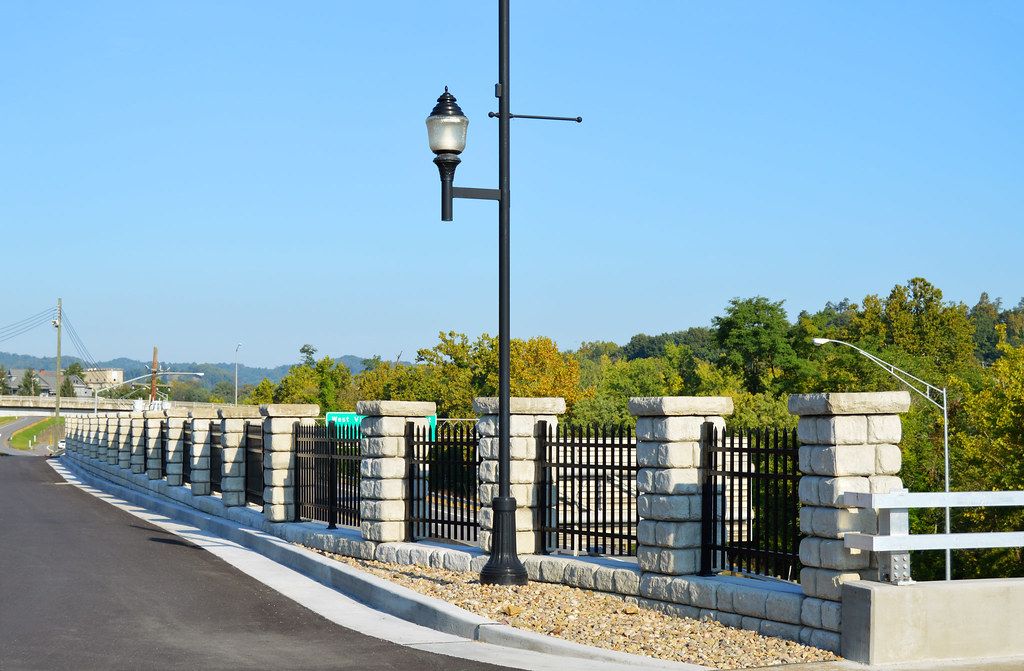 Redi-Rock column blocks integrate beautifully with fencing to create a barrier for this project.

The Transit Authority chose a Redi-Rock wall designed by Stantec and manufactured by a local Redi-Rock supplier. A reinforced Redi-Rock wall was required due to the height and loading conditions at this site.

Redi-Rock is an engineered, precast retaining wall system that utilizes massive blocks weighing over one ton each to create usable land. "We prefer to use the large block for a variety of reasons," explained Brett Coker, Senior Project Manager with Reclaim Company. "First would be appearance. We feel the large block present a strong and durable, yet pleasing to the eye appearance."

Each Redi-Rock block is cast in a mold taken from natural stone, giving projects an aesthetic stone finish. For this project, the Redi-Rock Cobblestone texture was used.

"Paired with geogrid that was installed with each course of block in the backfill material, the wall will function as designed to support the roadway and parking lot that will see heavy use daily from the CENTRA buses," Coker said. "We also view the use of Redi-Rock as a benefit due to the ease of construction and the capability to construct radii and 90 degree turns with the proper block." 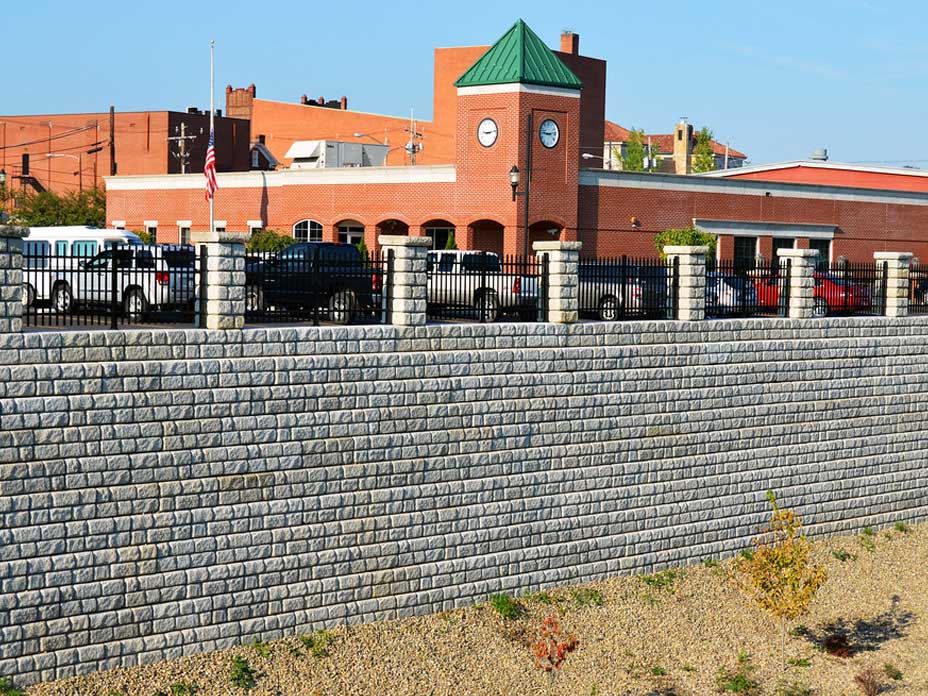 Building this retaining wall allowed the bus depot to expand its parking area.

The shape of each massive Redi-Rock block allows for easy construction of concave and convex curves and also 90 degree corners, which were needed on this project.

While Reclaim was preparing a bid for the project, they knew that the close proximity to US Route 50 would be a safety concern.

Jason Eddy, General Superintendent for Reclaim, coordinated this project. After demolition of the old bus garage, Reclaim prepared the site for construction of the Redi-Rock wall by installing a concrete footer for the wall and then began installing the base block and the next two courses. "It was then decided to stop wall construction and complete the stormwater piping and grading on the area next to the highway," Eddy explained. "This allowed us to complete this area of the site early in the project thus reducing the safety hazards of having employees working between the wall and busy highway."

Redi-Rock blocks install like one-ton Legos. Each block has a knob and groove design that automatically sets the batter. With 5.75 square feet (.5 square meters) of face per block, walls install quickly.

'We feel that a properly constructed footer, properly installed geogrid, and going the extra mile to trim the shear knobs where necessary to keep the wall precisely on line is the key to a great finished product," Coker said.

The Redi-Rock supplier coordinated very closely with the installers and engineers on this project to ensure the project progressed as quickly as possible. Working within 15 feet of the highway presented some challenges for delivery, staging, and installation. The installers utilized a Caterpillar 316 Excavator, Caterpillar 320 Excavator, Caterpillar D4 Dozer, Caterpillar 279 Skid Steer, and a Bomag 211D-4 Vibratory Roller to get the job done. The overall project from demolition to opening of new parking lot/roadway was 8 months. The actual construction of the footer and Redi-Rock wall with backfill was approximately 4 months. 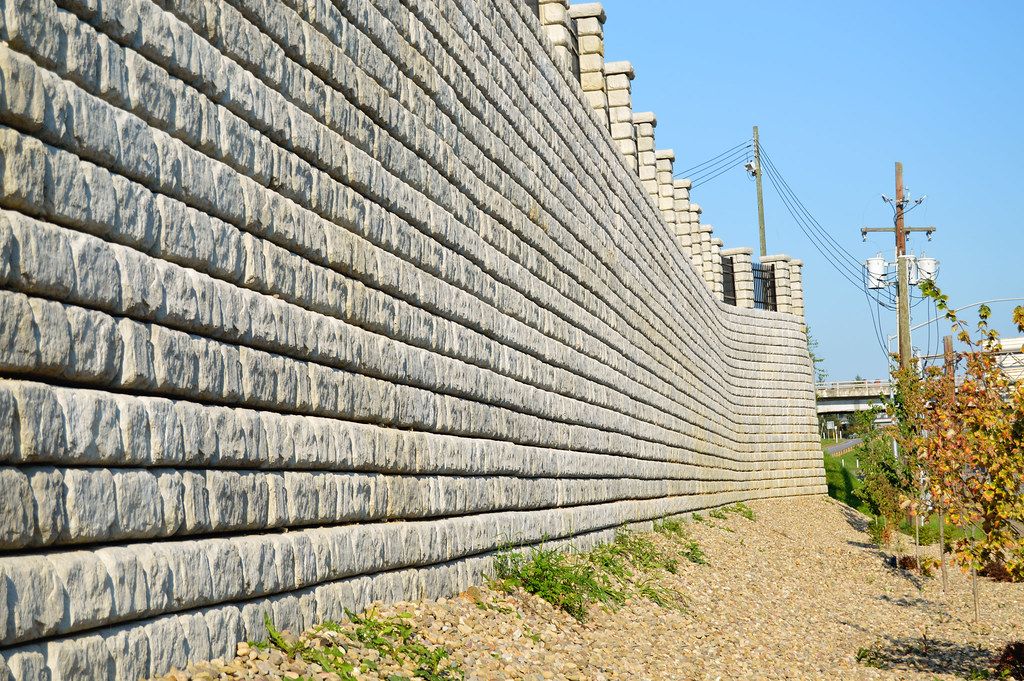 This Cobblestone texture wall blends in well with this West Virginia town.

The original building was adjacent to the bridge, allowing drivers to turn off the 4-lane bridge and into the building. The Transit Authority wanted to maintain the access from the bridge into the new depot's parking lot, which required the designers to create a 90 degree turn in the retaining wall to act as an abutment to support the travel lanes coming off the bridge.

To create a fortified barrier, engineers specified freestanding garden blocks for the top course of the wall. Rebar was inserted into the manufactured trough in the top of the block and then concrete poured in to create a solid "beam" at the top of the wall, tying all the blocks together.

"The key to installing a Redi-Rock wall properly is to take your time and construct it to the best of your ability so that when you complete the project and demobilize from the site, you can leave knowing that you would be proud to have that wall in your own backyard," Coker said.

Column Blocks - Redi-Rock columns can coordinate with retaining walls or freestanding walls, and even fencing!