After purchasing a home in Bay Village, Ohio situated on the shores of Lake Erie, the owners of this private residence intended to take full advantage of their new lakefront property. However, the steep slope of their backyard made accessing the lake area incredibly difficult.

With big plans for several upgrades for the lakefront area, including a boat garage, beach house, pier, and marine elevator, the homeowners needed a way to make it easier to access.

The general contractor who was building the lakefront beach house had originally planned to construct a ramp leading down to the lake, but after taking a closer look at the sheer hillside, he realized he would need a better solution.

The general contractor turned to landscape designer Doug Baldi, owner of Baldi Design Solutions Inc. for help. After viewing the property himself, Baldi realized they were going to, "need a lot more than straight walls and terraces."

"One of the challenges is they had a hillside that was basically a 1-to-1 slope that you could hardly walk up and down," explained Baldi. "The homeowner had some very definitive requirements for this project, one being he wanted to have a ramp that you could actually drive a vehicle down. The second requirement was he really wanted usable space as he went down, and he envisioned a putt putt golf course." 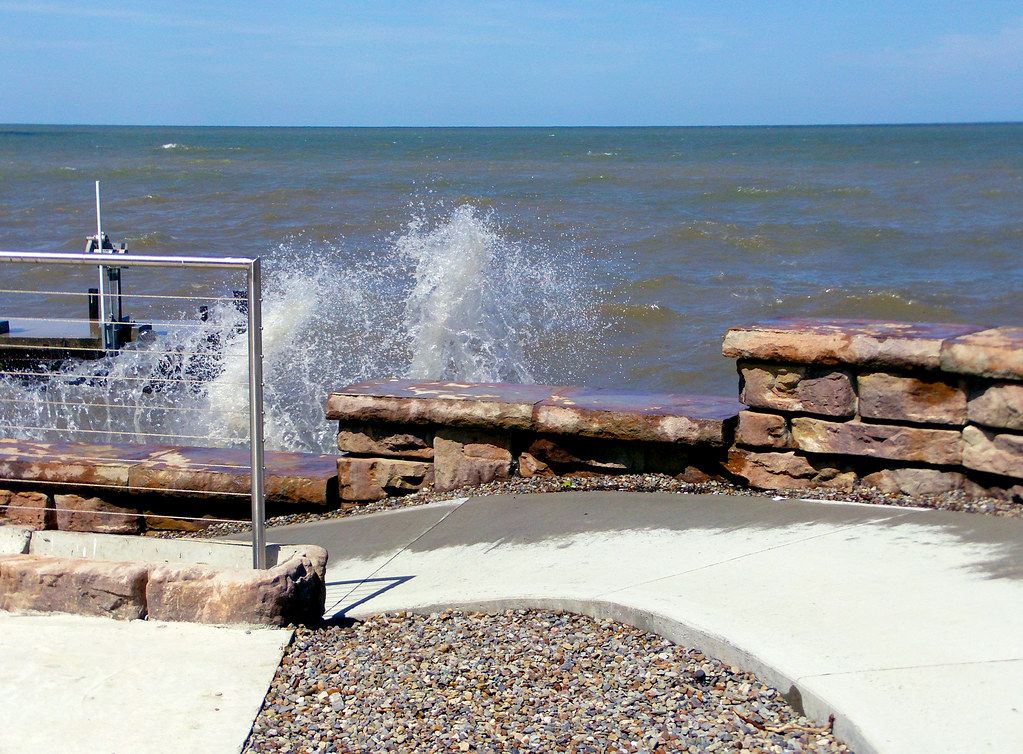 To accommodate the homeowner's requests and contend with the challenges of the sloping property, Baldi came up with a design that would incorporate curved walls, terraced levels, ramps and stairs built with Redi-Rock, a precast, large block retaining wall system engineered to harness the power of gravity to build tall retaining walls. Redi-Rock blocks stack together like giant Legos to install quickly, without the need for additional reinforcement in many applications.

"In the Cleveland area, we have a lot of shale cliffs. You want to build in front of the shale and protect it, but you have to anchor those walls back into the shale somehow because you can only go so high with segmental block. With Redi-Rock, we can go so much higher with the walls and we can get good foundations on the shale without having to excavate for geogrid or try to do some type of drill and pin anchoring for the walls," Baldi explained.

Baldi worked with Stephen Jones and his team from local Redi-Rock producer and installer, North Coast Marine Construction Inc. (NCMC), to complete the project. They began by creating I-beam pilings on the hillside driven down to the point of refusal which, for most of the hillside, was the shale cliff. Rebar reinforcement was added then concrete was poured on top to create concrete footers on which the retaining walls were built.

Redi-Rock blocks in the Ledgestone texture were used on the walls of the project, which span from the backyard of the home all the way down the hillside to the lake area. The design incorporated multiple terraced levels, each one with a landscaped miniature golf hole and connected to the next level by both a ramp and a set of stairs.

Most of the walls were designed to increase in size with the slope of each ramp. Starting out around 0 to 2 feet (0.61 meters) high, the walls slope rise up to 10 feet (3 meters) to 12 feet (3.7 meters) high at the far end of the ramps. There's also one massive wall that reaches over 20 feet (6.1 meters) at one end of the project where there's a curved staircase. 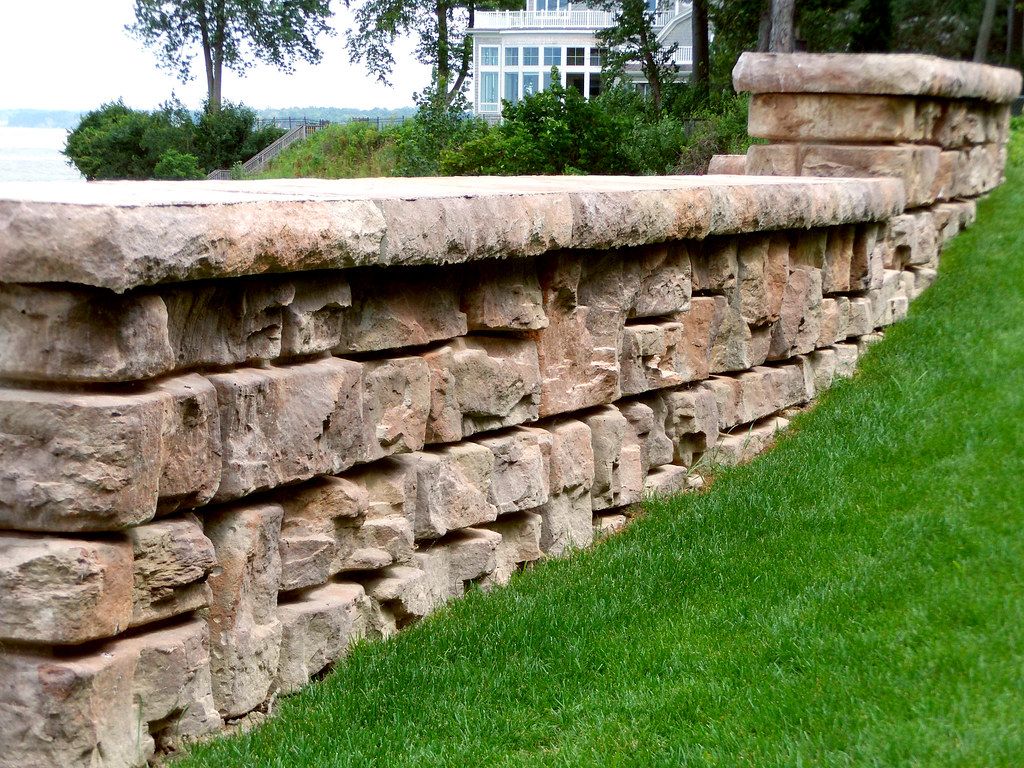 Redi-Rock gravity walls made construction on the shale cliffs of this property possible without requiring reinforcement.

According to Baldi, "part of the design challenge was to get big enough radiuses so you could maneuver down the ramps with a trailer and a 4-wheeler."

Because Redi-Rock is so versatile, the installers at NCMC were able to customize the blocks to achieve the radiuses needed to accommodate the design of the curved walls. In fact, once the ramps were in place, the installers took advantage of the ramps by taking their Bobcats and other equipment up and down them to perform maintenance work and install the mini golf course areas.

Redi-Rock gravity blocks in the 60in (1520mm), 41in (1030mm) and 28in (710mm) sizes were used to build the retaining walls on this project. As the gravity walls rose above the ramp level, they transitioned into Redi-Rock freestanding blocks to form the guardrail for the ramps.

A combination of ramps and Redi-Rock steps were used to connect one level to the next, with a putting green added to each level and custom work done by NCMC to create curved steps to follow the curve of the walls. Columns in the Ledgestone texture and caps were added throughout the project to pull the design together for a cohesive look throughout.

Additional custom work was done to provide heating for the ramps leading down to the lake. There are also multiple gas lines that run through the walls to power twelve 35,000 BTU lamps incorporated within the design to light the walls at night.

This project was the recipient of the 2015 Rocky Award for "Residential Application Wall of the Year" from Redi-Rock International. The Rocky Awards are an annual honor recognizing the best Redi-Rock projects completed each year across the globe. 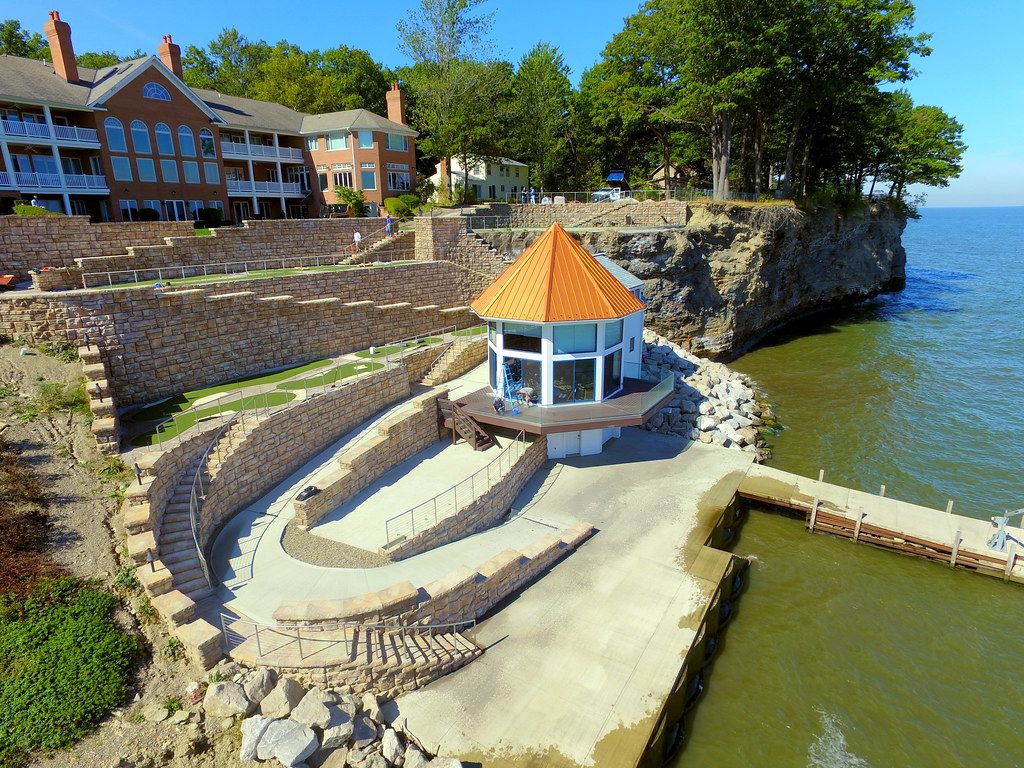 In total, 9,000 square feet (831.1 square meters) of Redi-Rock Ledgestone retaining walls were used to turn this unusable backyard into a dream lakefront property.