It's hard to imagine dealing with waves lapping at a home's door-but that's exactly the situation this Nova Scotia family found themselves in in 2012.

"As teenagers, my husband and I dated here on the old rock wall. It used to be a camp," explained homeowner Heather Fisher. "We always said we'd like to own this property someday. Long story short, we bought the property and the wall always held back the water. But then a few years ago, the wall came down in a storm and the water came right up to our doorstep. We had to use sand bags and everything to try to keep the water out."

The house is located on an exposed point on the shore of Shubenacadie Grand Lake. "It's a large inland lake by Nova Scotia standards," explained George Searle of Searle Environmental Services Limited. "They had what I would call the 'perfect storm' - extreme high water levels and strong winds for a long period of time. This destroyed the hand-built rock wall that had been in place there for years, and it also eroded the shoreline. The waves were breaking all the way up to the front door threshold." 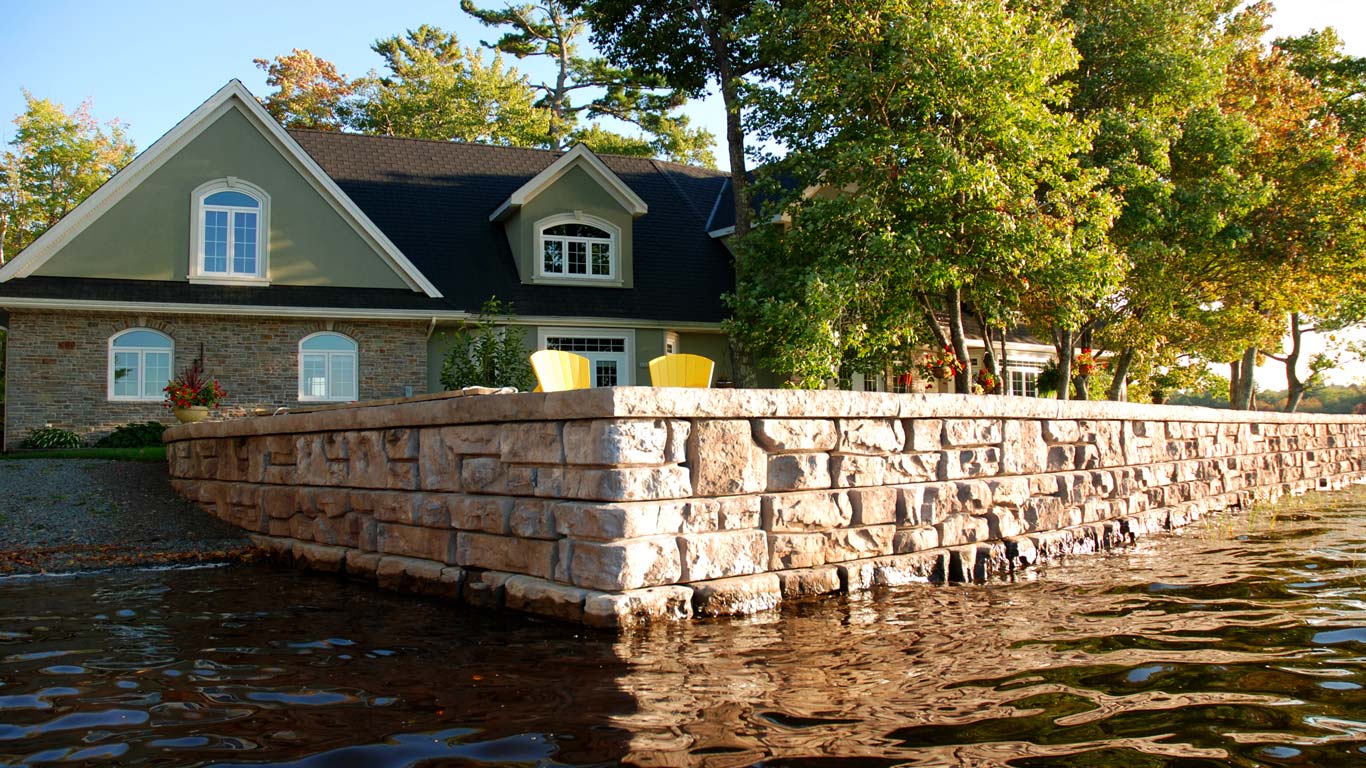 In addition to shoreline protection, this project also included a boat launch incorporated with the wall.

When the Fishers initially consulted with Searle, they wanted another natural stone wall installed. "He recommended that we not go that route though. We're out on a peninsula and when we get a Nor'easter, it really hits the shore hard."

Searle recommended that the family look into installing a Redi-Rock retaining wall as a solution. "Our firm had great results using Redi-Rock at another shorefront property on the same lake a few years previous, so we had no hesitation in designing a protection system for them using Redi-Rock."

Searle designed the Redi-Rock wall as a gravity structure which relies on the shear mass of the one-ton blocks to retain the soil. "We selected Redi-Rock for the weight and ballast it has. It is more than sufficient to deal with the wave energy here. There are a lot of worse cases in coastal situations in Nova Scotia, but it's amazing the shoreline damage that can occur when you get a perfect storm on an inland lake like this," Searle said. 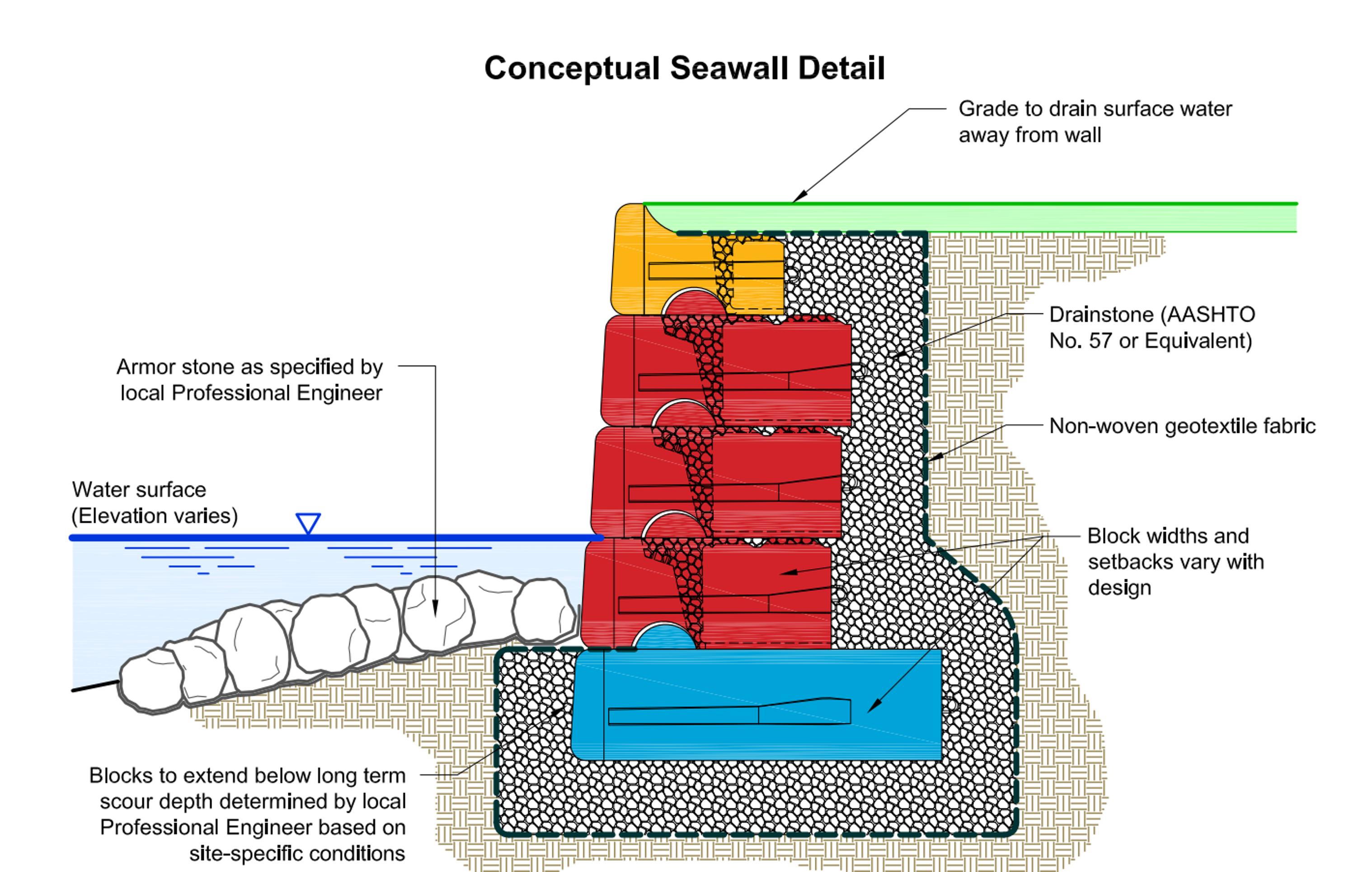 Doug McLean, sales manager for DuraCast, recalls the Fishers coming into his office. "We were producing at capacity for another big job, and I had no blocks for them. Heather actually sat in my office and cried. She was saying, 'I need blocks or I'm going to lose my home!'"

McLean was able to pull blocks from his large order to supply the family with enough to install the base course of the shore protection wall. "I knew that if we could get in that first row of blocks, we'd be ok," McLean said. "Then over the next few weeks, I was able to siphon off enough blocks to finish their wall before the end of the summer when the storms started up again."

Redi-Rock is a precast segmental retaining wall system, which allowed Searle to design the wall to follow the natural shoreline. "We were able to do this because of the way the system interlocks. It gives you flexibility to incorporate the natural curvature of the shore," Searle said.

To install the new wall, the crew from Kel-Greg Enterprises Ltd. removed the old stone wall, installed the new Redi-Rock wall further back on the property, then used the original stones as toe protection in front of the face of the new wall. "There's some wave action against the base of the wall that could cause toe scouring, and we wanted to prevent that," Searle said. The crew was able to install the entire project from the shore during the low flow period (June-September) without staging any material or equipment below the ordinary high water mark. 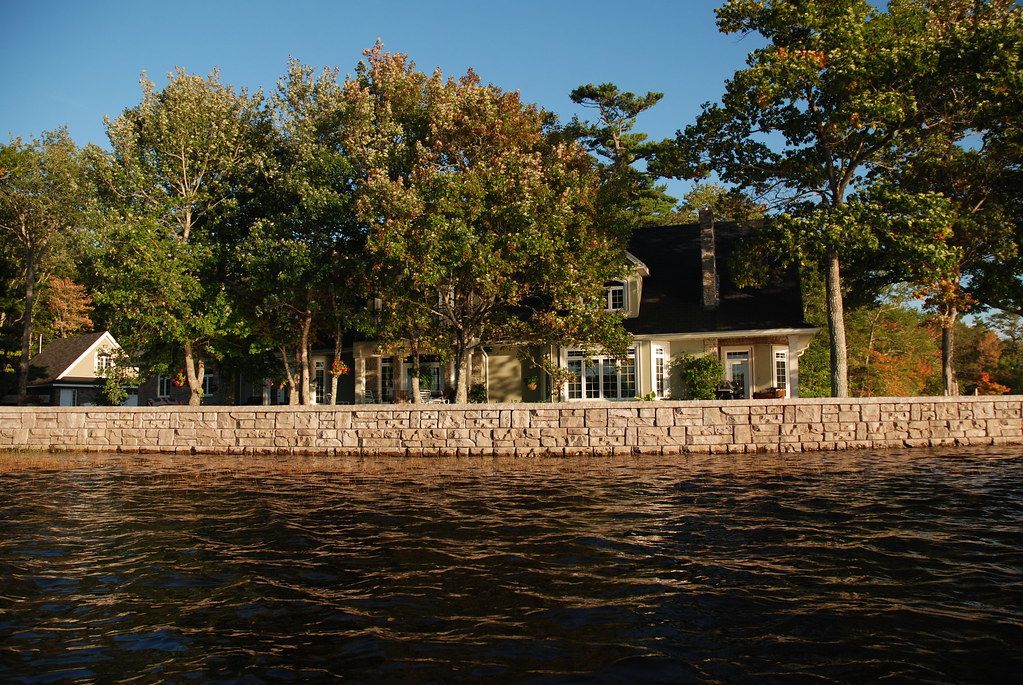 "We've had the wall for 2-3 years now, and it's held up really well," Fisher said. "The ice just crashes against it in the spring when it's thawing, and the blocks all still look great."

In addition to shoreline protection, this project also included a boat launch incorporated with the wall. "It's the only one I've seen like it on the lake," Searle said. "That made it a bit unique."

The Fishers were so happy with the results of the Redi-Rock wall that they've since expanded it. This project was the recipient of the 2013 Rocky Award for "Residential Wall of the Year" from Redi-Rock International. The Rocky Awards are an annual honor recognizing the best Redi-Rock projects completed each year around the world.