When developers purchased a popular RV park on Lake Pend Oreille in Hope, Idaho, they had a vision to transform the property into a resort that includes high-end home and condominium sites. They envisioned the centerpiece of the Beyond Hope II development to be a beautiful and unique 50 slip marina.

The marina that existed at Beyond Hope had decayed to the point that it was unusable for boaters, so developers chose to begin the first phase of renovations with the marina overhaul. The goal of the marina renovation was to increase the size of the marina as well as improve its look and functionality. Included in the renovation were several retaining walls that would highlight the project. 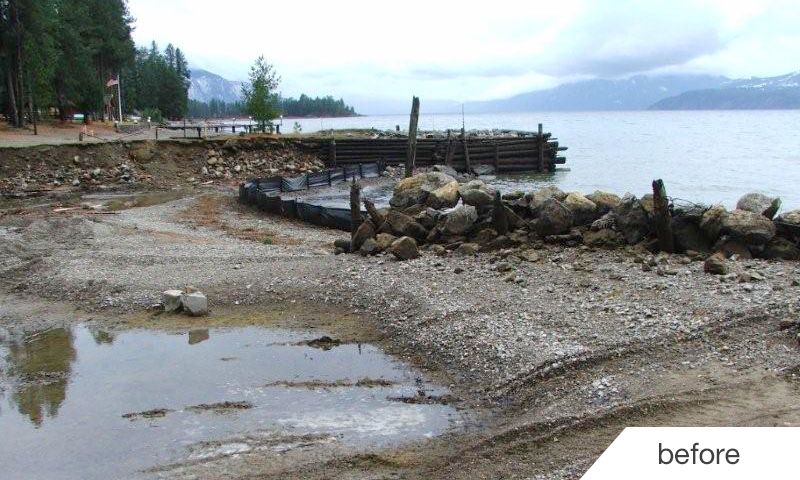 The marina that existed on this property had decayed so badly that it was unusable when developers purchased the land.

Developers chose Redi-Rock retaining walls due to Redi-Rock's diverse product capabilities, applications, and aesthetics that could be integrated throughout the entire development. 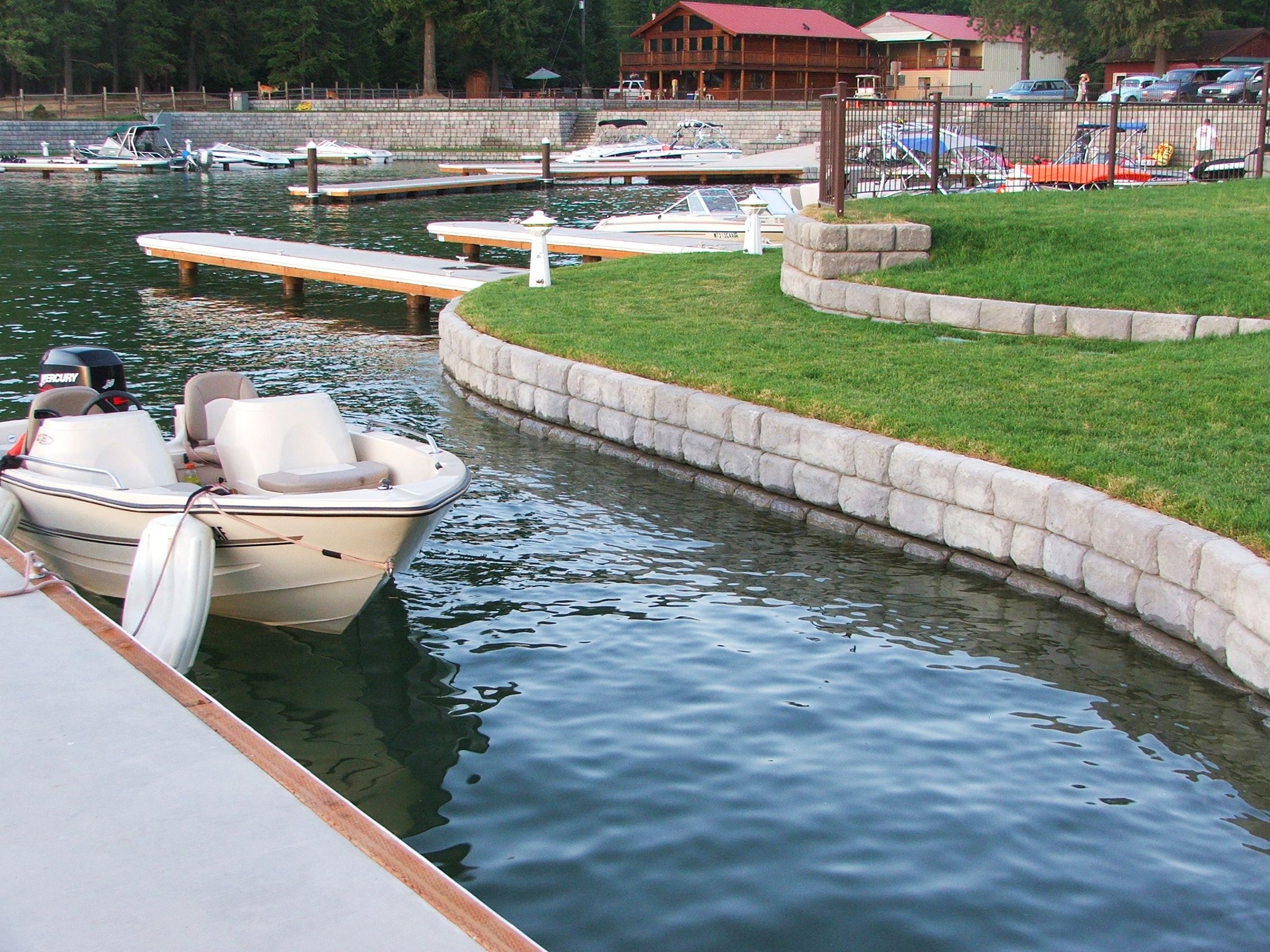 Developers used Redi-Rock gravity walls to transform the dilapidated piece of land into a beautiful marina.

The marina project featured two tiers of Redi-Rock retaining walls in the Cobblestone texture. The marina basin is outlined with a 9 foot (2.7 meter) gravity Redi-Rock wall that is completely submerged except for the top 12 inches (305 millimeters) when the water is at "full pond." The second 9 foot (2.7 meter) tier creates a 10 foot (3 meter) wide level access area for boaters to walk to and from the docks.

In addition to retaining walls, the marina design called for a sea wall to protect the marina from waves and rough water. Originally, the designers had wanted to use Redi-Rock freestanding blocks to construct the break wall; however, the water level at the base of the proposed seawall was below the low water mark and the Department of Environmental Ecology would not allow the dredging the site preparation would have required.

To provide a creative and structurally sound solution for the sea wall and maintain the continuous look of Redi-Rock throughout the marina, local Redi-Rock manufacturer Wilbert Precast designed 3 foot (0.9 meter) tall by 12 foot (3.7 meters) long by 6 inch (152.4 millimeter) wide precast panels that have the Redi-Rock Cobblestone face. The panels were then placed between steel I-beams driven into the lake bottom, creating a functional, durable sea wall with the appearance of Redi-Rock to create continuity throughout the project. In all, Wilbert installed 82 precast panels to create the seawall.

In total, 2,300 Redi-Rock blocks were installed, including retaining wall blocks, freestanding blocks, caps, and 72 steps. "This project used just about every Redi-Rock product we make at our shop," Rick Lindberg of Wilbert Precast said. 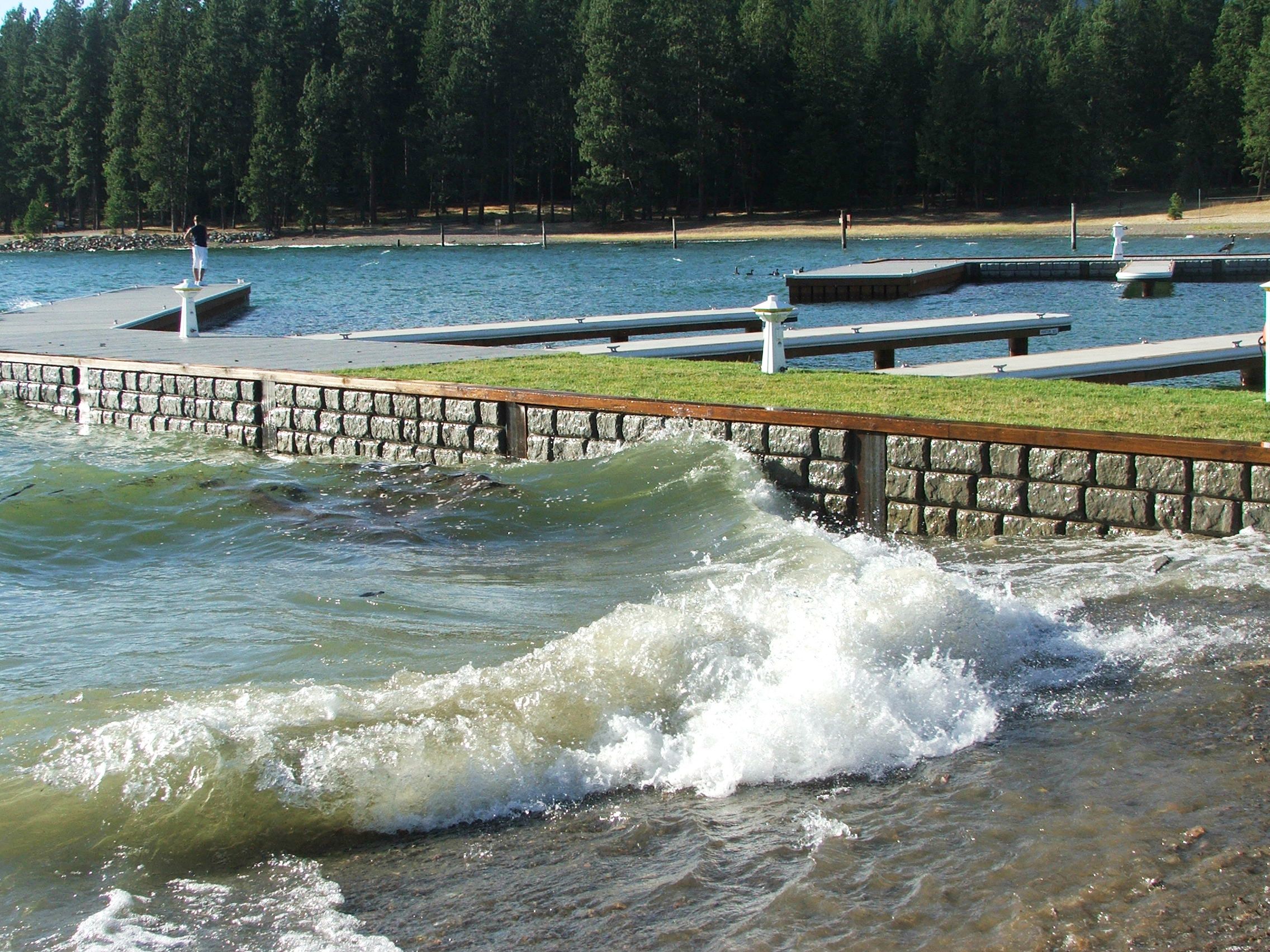 Redi-Rock Cobblestone texture blocks were used to give this high-end development a high-end look.

Step blocks - Redi-Rock steps blocks look like natural stone steps, but have consistent dimensions so they're easy to walk on.