For United Dairy Farmers (UDF) -- the 79-year-old, family-owned company that has evolved from a single 20-by-50-foot (6-by-15-meter) dairy store in Norwood, Ohio, to a mini-empire of nearly 200 upscale dairy/convenience/fuel stores in Ohio, Kentucky, and Indiana -- location has long been a linchpin of its success.

And without Redi-Rock, says Tim Kling, UDF's director of real estate, nabbing those critical locations in its latest expansion wouldn't have been possible. 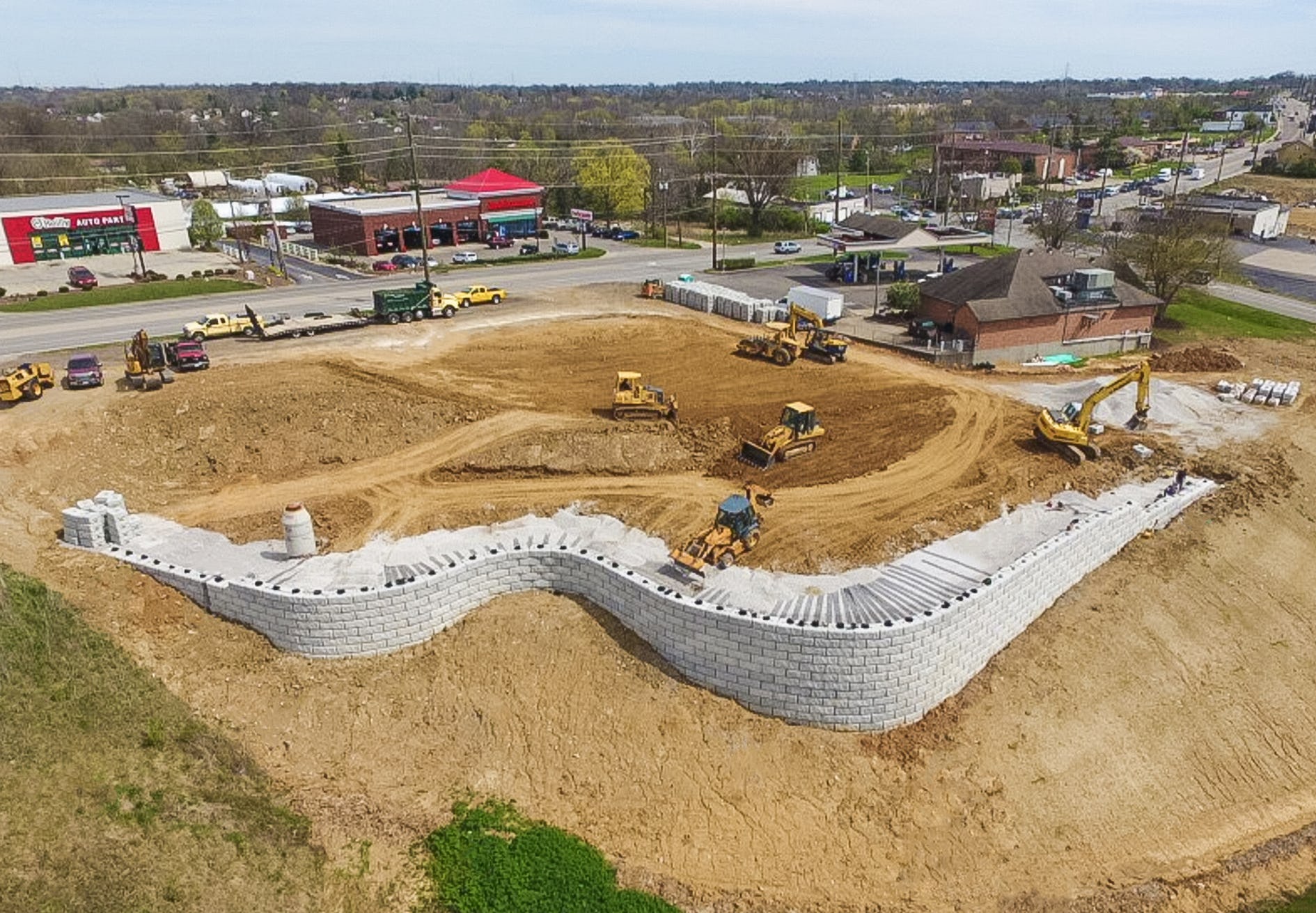 Redi-Rock Structures of OKI helped United Dairy Farmers transform this ideal location on the corner of Harrison Ave. and Wesselman Rd. into a buildable lot with a retaining wall built with Positive Connection blocks.

UDF's relationship with Redi-Rock Structures of OKI -- the local, licensed manufacturer of the massive, precast modular blocks (PMBs) often compared to giant Lego blocks -- began about a decade ago. UDF contracted with Redi-Rock Structures of OKI for the retaining walls it needed for two new site locations. The process went well, says Kling: "We knew these walls were stable, they were impressive, they looked great. And we liked working with them."

Back then, UDF's approach to growth was as it had long been: conservative, generally a new store or two each year. But recently, UDF sought to get more aggressive in its market, adding new locations and replacing older stores -- accelerating its expansion rate to roughly seven to 10 a year.

More than that, the company wanted to go bigger. Much bigger. It had come up with an updated Craftsman-style design that roughly doubled the footprint of the existing stores and brought new or significantly more gas to its locations. To complement UDF's upscale style, fresh market, and meal offerings, landscaped outdoor dining patios also became part of the mix. All of the upgrades and additions in turn required more space for parking and deliveries, as well as larger or additional parking lot entrances and exits.

By using Redi-Rock Structures retaining walls, UDF has been able to turn impossible-to-build lots into perfect locations to meet the demands for their expansion plan.

Take the store at the corner of Harrison Avenue and Wessleman Road on the west side of Cincinnati, with only a thin chunk of buildable space and dramatic grade changes on the site: "No one else would have built at that site," says Kling.

The solution? Turn to Redi-Rock to build a retaining wall and set the store back as close as possible to the back edge of the property. Using geogrid reinforcement with the Redi-Rock Positive Connection (PC) blocks, they could quickly and easily stabilize the earth behind and below the wall. Ultimately, they were able to build a serpentine-like ribbon of PC blocks that unfurl around half the site, achieving heights of nearly 25 feet (7.6 meters) and creating more buildable space on the lot.

If they'd had to use a poured-in-place wall, says Kling, "That wall would have been monumental -- and potentially cost more." And it would have looked as ugly as...well, a giant concrete wall with footings towering far higher than 25 feet above a grassy ravine.

With Redi-Rock's Limestone textured block, on the other hand: "The walls are the talk of the city," says Kling. "You wouldn't believe it." 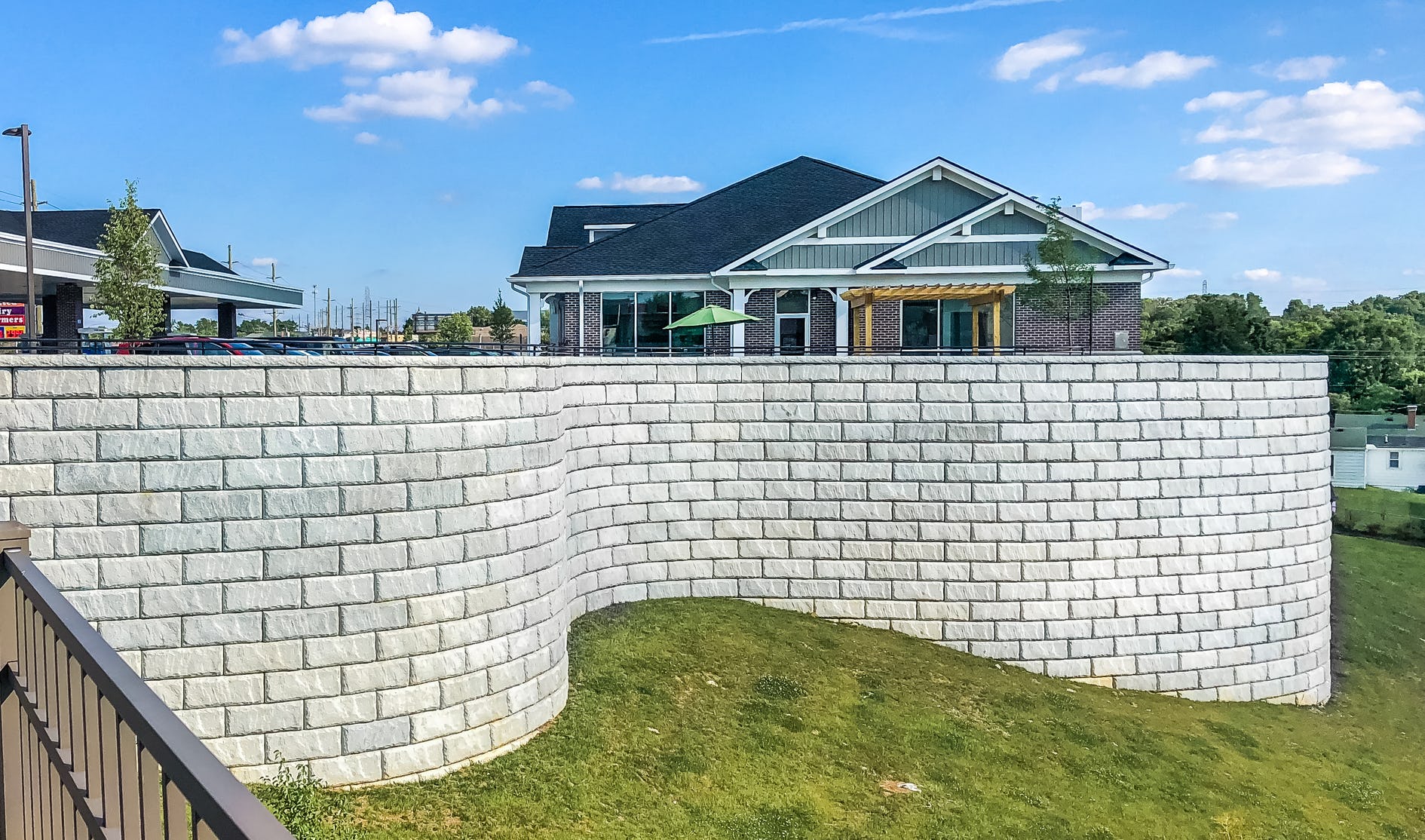 The 25-foot-tall serpentine wall at a UDF store not only helped create space for additional parking and an outdoor patio, it also helped add to the overall aesthetic appeal of the establishment.

The site at Bethany and Mason-Montgomery Roads, just north of Cincinnati, posed another problem, says wall engineer Andrew Lageman, P.E., of Civil Solutions Associates. It had only one exit and entrance. UDF wanted a secondary entrance and exit for its customers. The problem? The site's surrounding wetlands.

To leave the wetlands untouched, Lageman designed a bridge to create the second entry and exit, laying precast box beams and a concrete deck atop an abutment wall constructed of Redi-Rock's PC blocks. Those PC blocks sat upon a concrete foundation and transitioned seamlessly into wing walls made of Redi-Rock's gravity blocks. The wing walls facing roadside traffic spread extra wide, showcasing a 14-foot (4.3-meter) wall in the Ledgestone texture that ultimately runs almost the length of the property, says Kling, "and it's gorgeous."

Aesthetics are important to UDF. One of the key differentiators of its brand is the look and quality of its own products; unattractive, mediocre, or boiler-plate stores and locations simply don't suit. "It's important to us to be a good neighbor," says Kling.

"They're almost like mini grocery stores," says Lageman of UDF's new stores, "and the quality and the appearance and the aesthetics of the Redi-Rock block helps convey that message, versus a small block, something that looks like you'd get at a Home Depot."

Lageman has designed 11 different walls as part of 15 projects for UDF since 2015. What he says he appreciates most is that the ease of working with Redi-Rock Structures of OKI on the UDF sites enabled all involved to stick to the tight deadlines and maximize the speed and volume of the work.

"Most of [the sites] were happening simultaneously," he says. While one site had geotechnical exploration underway and engineering parameters being set, the team's architects and civil engineers would be tweaking another site's preliminary wall layouts, and a third site would be under construction. When that one closed out, the team would start the drill boring and soil classifications on a new site, and so on.

"[Redi-Rock] made the projects move more seamlessly," says Lageman. In addition, he likes the way that Redi-Rock stands behind what they say and the assistance they provide when challenges arise.

"They have great customer service on their technical staff. So if you have questions -- some sort of a weird connection or something like that -- they're more than happy to work with you on that. They make it really easy," says Lageman. 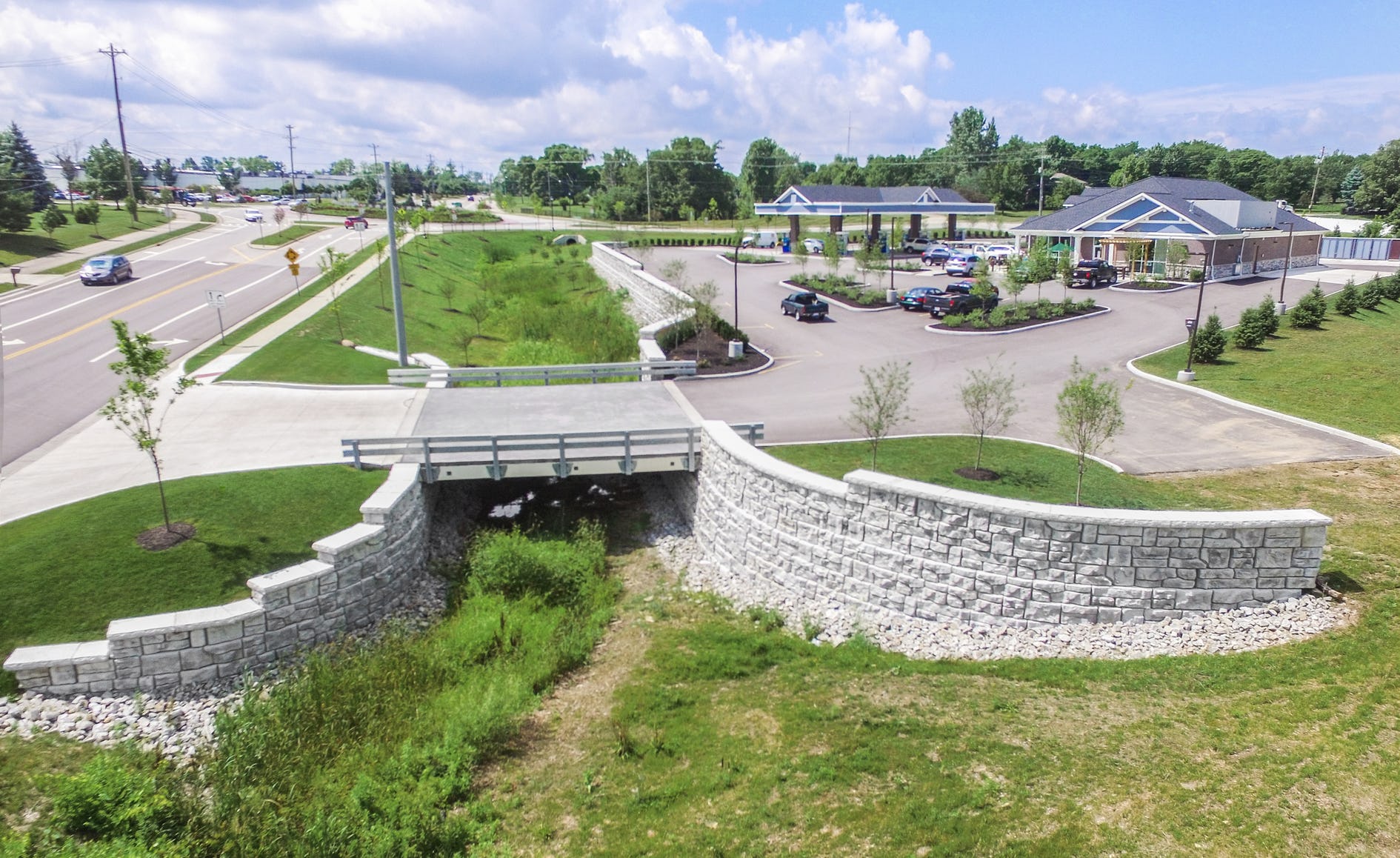 By the sheer volume of projects they've coordinated on, UDF would agree about the ease of working with Redi-Rock. In fact, Kling says because they work with Redi-Rock so much it's turned into kind of a joke: "People in the marketplace kid us all the time, 'You must be partners with them.'"

Kenny Swanson, director of sales and business development for Redi-Rock Structures of OKI, says that, with 36,000-plus square feet of Redi-Rock dedicated to UDF projects in just the last three years, partnership isn't far off the mark.

"We have a great working relationship with them. They are a local and very loyal family-owned company that's been around forever, and we really appreciate that they work with us, a family-owned company, too," he said. "We try to build a relationship with them to find what their needs are. We try to be problem solvers. And we try to bring solutions to the table that are cost-effective...and it just so happens it looks really nice."

And, adds Lageman, he knows that it will last for years to come: "They make our job easy, and I trust it when I put it up," he says. "You know, it's got my name associated with it - I trust that it's gonna be there, and it's gonna last."