Red Hills Mine in Choctaw County, Mississippi, produces over 3 million tons (2.73 metric tonnes) of lignite coal per year to supply an adjacent electric generating plant. The plant, in turn, provides electricity to the Tennessee Valley Authority (TVA) to keep reliable power flowing throughout the region.

When the mine expanded its operations to a 2,000-acre (809-hectare) parcel across nearby State Route 9 (SR 9), Mississippi Lignite Mining Company (MLMC) had to establish a means for its large mining equipment to cross the highway without disrupting traffic flow.

In 2019, MLMC contracted with the engineering firm of Neel-Schaffer to design and implement access to the east side of SR 9. The firm’s solution included the creation of a 140-foot (43-meter) long, one-span (grade crossing) bridge along the highway to allow the construction of an operational road under SR 9.

The new bridge would be supported by tall steel pipe piles encapsulated in the bridge embankments.. The embankments, in turn, would be retained by abutments composed of Redi-Rock Positive Connection (PC) blocks. The large block reinforced retaining wall system was selected for its durability, ease of construction, and versatility in navigating the structure’s peripheral components. Redi-Rock reinforced walls also offered the project what most wall systems could not – the 35-foot vertical clearance needed to accommodate the company’s large mining and hauling equipment. 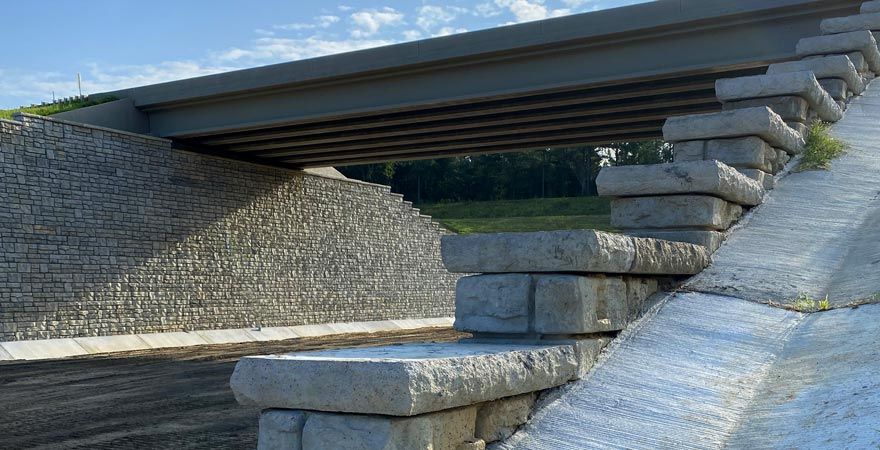 A concrete ditch was incorporated into the bridge design to aid in drainage from the road above.

Redi-Rock Wall+ software was used to provide the design for the project’s two retaining walls according to Kevin Kennedy, P.E., with Neel-Schaffer. Over 3,000 Redi-Rock blocks would be used to contain the embankments supporting the bridge approaches, each measuring over 40 feet (12 meters) tall and 300 feet (91 meters) in length.

Kennedy specified a reinforced concrete leveling pad on which to construct the two reinforced walls.

“We wanted a very level surface to start the first course of blocks on,” he noted. “We also wanted a base surface that would offer some amount of structural continuity to help minimize any differential settlements that might occur with the tall and varying wall heights required.”

The Redi-Rock 28in (710mm) PC blocks used on the project are cast with a core slot where 12-inch (300-millimeter) wide strips of geogrid are wrapped through the block, virtually eliminating any chance of a connection failure for the reinforced modular block wall. Miragrid 20XT and 24XT geogrid in varying lengths up to 35 feet (10.7 meters) was utilized in the wall design. Redi-Rock design resources were used to plan for the placement of any geogrid in conflict with the pipe piles behind the wall. 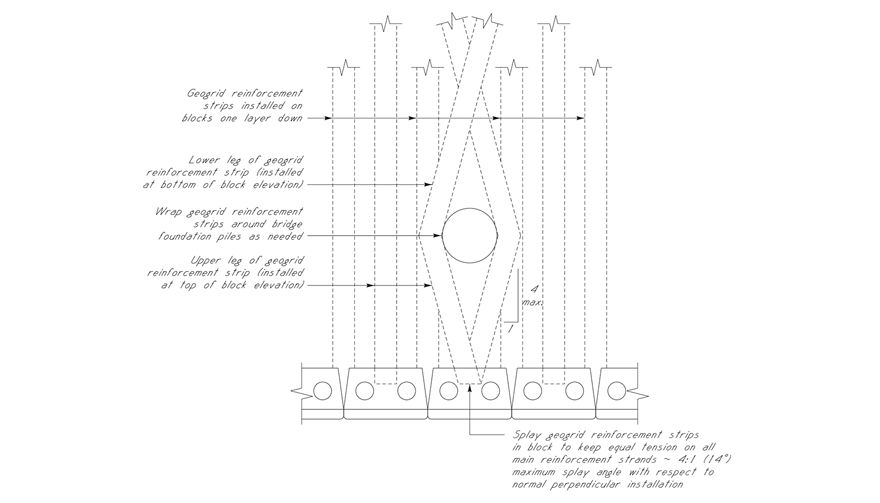 To reduce wall system costs, the design team used on-site material for the reinforced zone backfill. “[The material was] classified as a silty sand having a minimum effective internal angle of friction of 28 degrees,” said Kennedy.

Redi-Rock concrete caps were used to finish off the top of the walls and a poured-in-place concrete paved drainage ditch was incorporated down the embankment slopes from each corner of the bridge to complete the wall design.

“The concrete paved ditch,” explained Kennedy, “was constructed directly behind the top of the sloped portions of the wall to prevent erosion of soils from occurring due to water drainage coming off the bridge and/or the SR 9 roadway.” An underdrain system was also added in front of the walls at the top of the leveling pads to minimize the groundwater in the lower regions of the reinforced zone backfill and a concrete paved ditch was constructed between the edges of the operational road shoulders and the face of each wall for surface drainage. 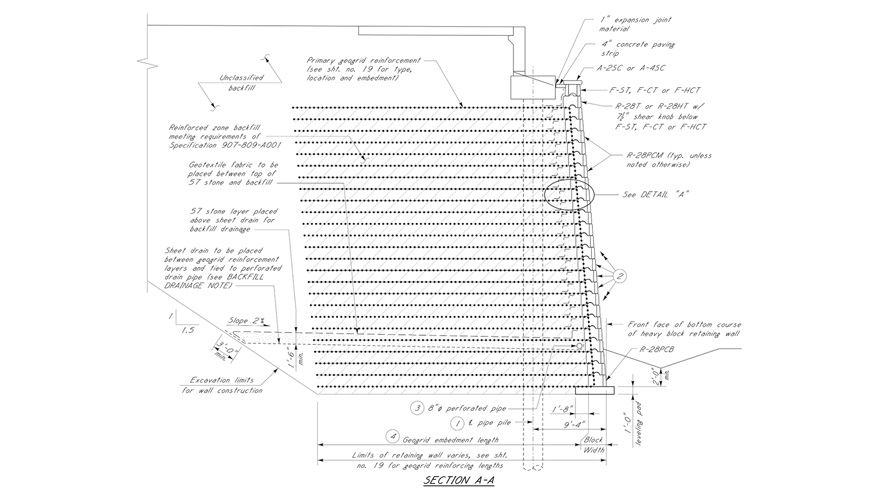 The project began in the Spring of 2020 with the rerouting of SR 9 traffic around the project on a temporary detour road. The installation of the Redi-Rock block retaining walls began the following October and was completed three months later by Patton Construction of Pontotoc, Mississippi.

Patton’s Estimator and Project Manager, Byron Houston, P.E., P.S., has designed and guided the installation of numerous Redi-Rock retaining walls. Houston appreciates the ease and time saved using Redi-Rock’s large precast blocks and would recommend the system to other engineers.

With the insight of both a wall designer and project manager, Houston advises engineers to take advantage of Redi-Rock design tools and construction details. “When the engineer stays in line with Redi-Rock details,” he explained, “it makes it a whole lot easier [on the contractor during installation].”

The construction crew noted both the ease of installation and the time-saving benefits of working with Redi-Rock’s large precast blocks.

“One of the good things about Redi-Rock is you’re putting in 6 square feet per lift,'' explained Houston. “When you’re doing segmental blocks, you have to take more time and care to lay each block because there are a lot more units to cover the same area.” 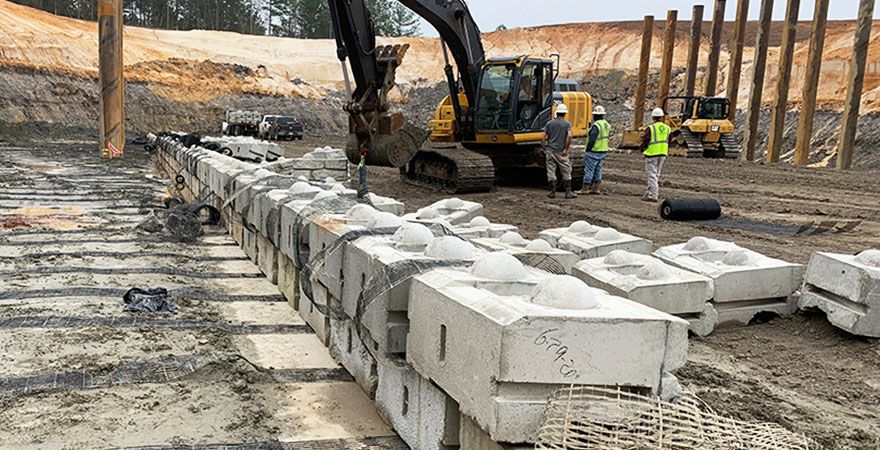 A reinforced concrete leveling pad provided a strong level base for each of the tall Redi-Rock retaining walls.

The design of the bridge coupled with the Redi-Rock wall system’s height capabilities eliminated the need for the incorporation of collision protection, saving project costs and future maintenance expenses. The tall clearance achieved with Redi-Rock retaining walls also provided additional safety measures for both Red Hills Mine equipment operators and SR 9 motorists.

Thanks in part to Redi-Rock, local traffic is flowing safely and Red Hills Mine has the access it needs to the raw materials that keep the region supplied with consistent, safe and affordable energy.