Protecting local wetlands was a high priority when the Omaha Royals AAA baseball team needed a new stadium to call home. Their long-time stadium in downtown Omaha closed in September 2010 and the team was moving south of town.

The access road for the new 30-acre (12 hectare) development crossed through an area of wetlands, which required special environmental consideration.

Initially, engineers considered grading a gradual slope from the roadway down into the wetlands but chose a design using architectural culverts and headwalls instead.

"The objective was to minimize the footprint through the wetlands. Rather than creating a 3:1 slope and destroying or disturbing all that wetland, the vertical headwall saved a substantial amount of wetland," explained Dan Thiele, president of Thiele Geotech.

A total of three culverts required six headwalls. The headwalls abut the culverts and stand approximately 30 feet (9 meters) from the centerline of the roadway, on either side.

The project's civil engineering firm and contractor had both worked with large precast modular wall systems in the past and liked the mass of the blocks and their inherent stability in headwall applications. Redi-Rock was ultimately chosen for the project based on its cost competitiveness and aesthetics.

"The Ledgestone face looks really good. Aesthetics wasn't a primary consideration, but once they saw the new face, the deal was sealed," Thiele said.

The Redi-Rock Ledgestone texture gives these headwalls an incredibly natural look. It's nearly impossible to distinguish individual blocks within the finished walls, and the colors blend in with the landscape.

The design of the Redi-Rock headwalls was unique - a hybrid of reinforced and gravity structures. The civil engineers for the entire project, Lamp, Rynearson & Associates, Inc., required the top 7.5 to 9 feet (2.3 to 2.8 meters) of the headwall be a gravity wall. But since the headwalls stand 28.5 feet (8.7 meters) high, the bottom portion of the headwalls needed to be reinforced. 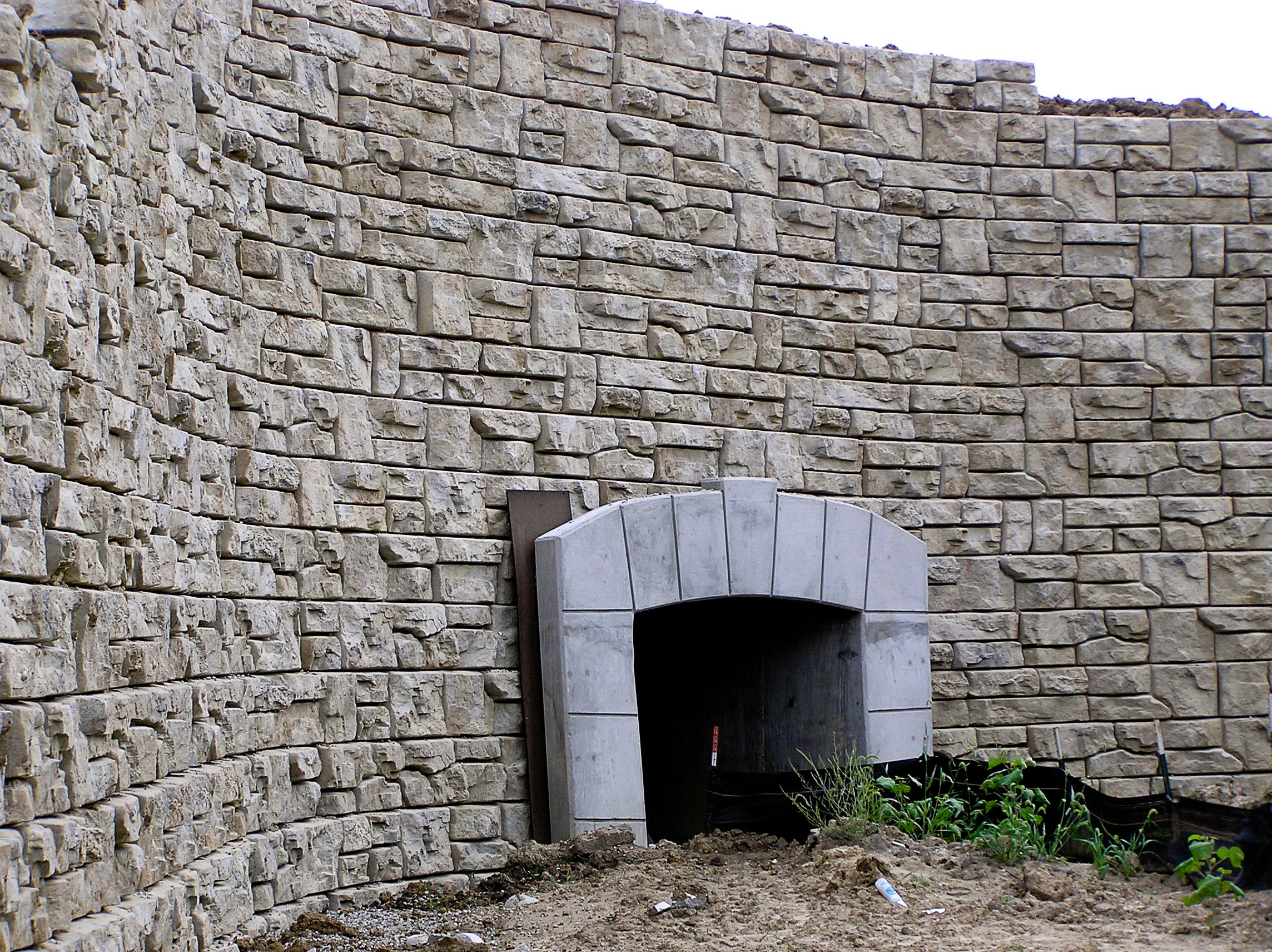 This Ledgestone texture wall is one of six headwalls on the project which were required to abut three culverts.

"Creating a geogrid-free zone in the upper part of the walls helped prevent potential conflicts with utilities that would be installed under the road way-waterlines, sanitary sewers, storm sewers, power, and communications," Thiele said.

To meet the design criteria, Thiele designed the bottom portion of the headwalls using Redi-Rock 28in (710mm) reinforced blocks. Prior to constructing the walls, the installation crew from Linhart Construction Inc. installed leveling pads of compacted stone to ensure the stability of the walls. The crew installed 12 courses of Redi-Rock blocks, or 18 foot (5.5 meter) tall walls-reinforced in every course with geogrid extending 18 to 20 feet (5.5 to 6 meters) behind the walls.

As specified by Thiele, the crew backfilled using sand and compacted after each course of block and geogrid were installed. Thiele designed the remaining 6-7 courses using Redi-Rock 41in (1030mm) gravity blocks to allow the top portion of walls to be built without geogrid.

The headwalls feature both inside and outside curves, which were built using standard Redi-Rock blocks. No cutting was required.

The headwall portion of the project was completed in about a month. Phase 2 of the project included installing Redi-Rock Ledgestone columns with caps and freestanding walls above the headwalls, as well as black metal fencing.